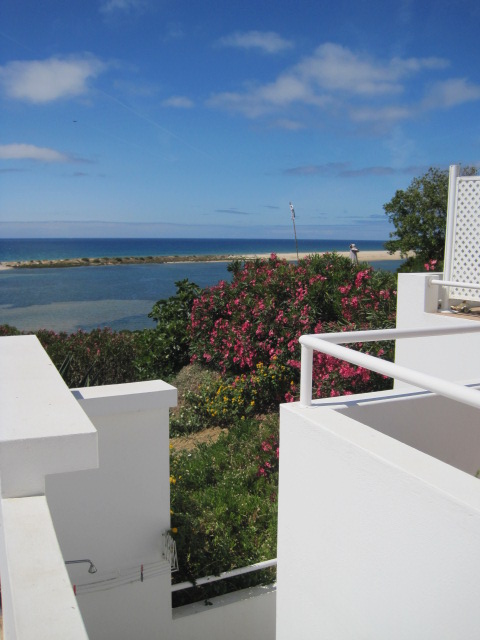 Isn’t this a view worth falling down a hole for?

Well, don’t worry!  I’ve already done the falling, and you really won’t need to.  The view above is at Cacela Velha, the midway point in a beautiful walk.  Let’s proceed with caution, shall we? 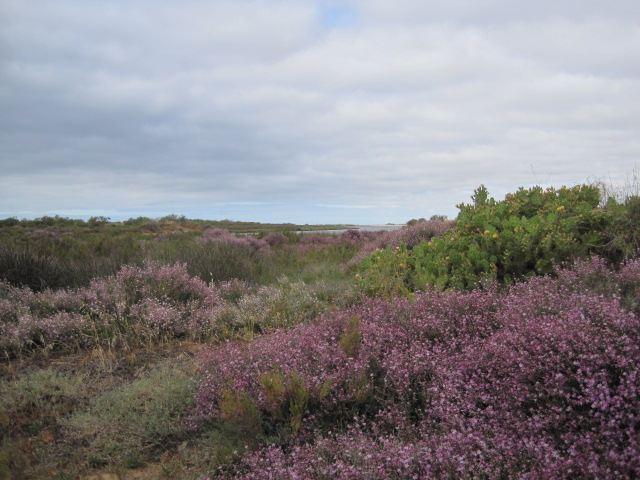 It was a little cloudy and cool when we set off

Good walking weather!  We started from behind the broad beach at Manta Rota, in the Eastern Algarve, and picked our way through the madly flowering sea broom.  We were heading west, towards Cacela Velha, with plenty of distractions along the way. 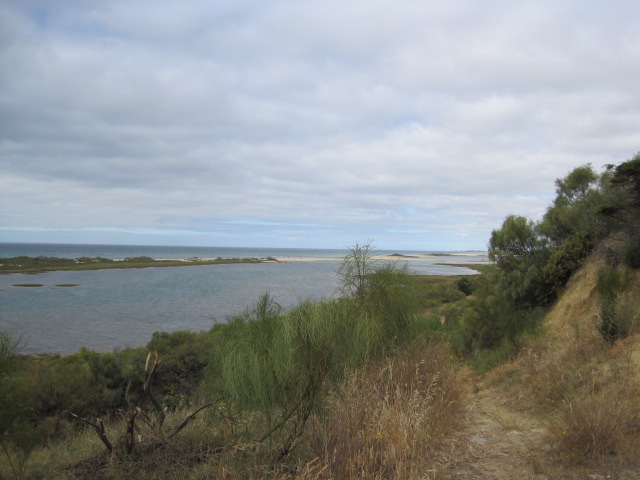 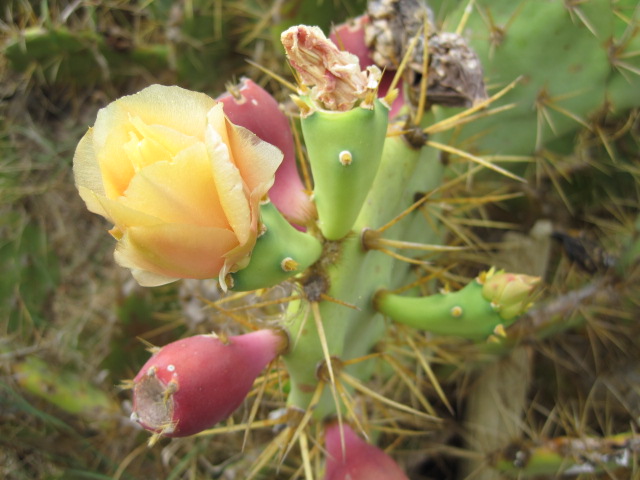 And flowering cacti, thriving in the sandy soil

There was a bit of a scramble at one rather steep point, but the men in the group shepherded us through, and then it was easy going again. 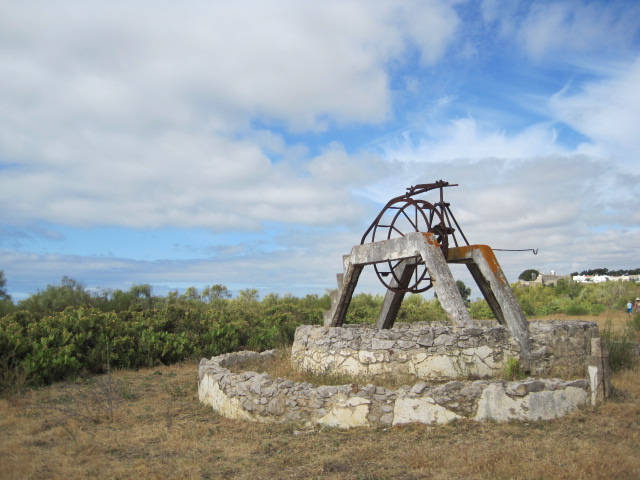 In an open stretch, we came upon a well 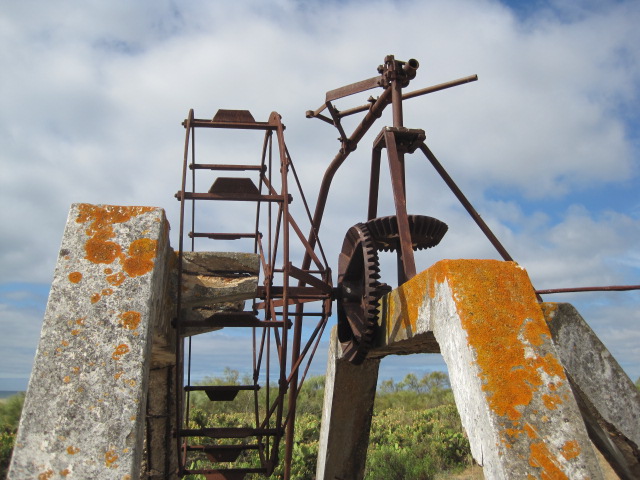 Well-rusted in close up, but still with water in the bottom 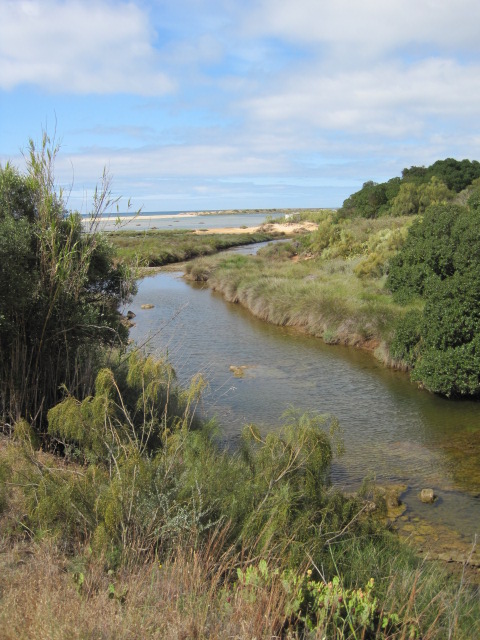 At this point, we trod quite carefully.  Sandy, the walk leader, emphasized we should keep clear of the slippery rim.  Normally the stream was forded by stepping stones, but they seem to have disappeared.  It wasn’t particularly tricky, so long as you kept your eye on the path.

In any case, the village of Cacela Velha lay just ahead of us, and a coffee stop was planned.  I make no secret of the fact that this is one of my favourite Algarve places, and that neither time nor man has been able to spoil it. 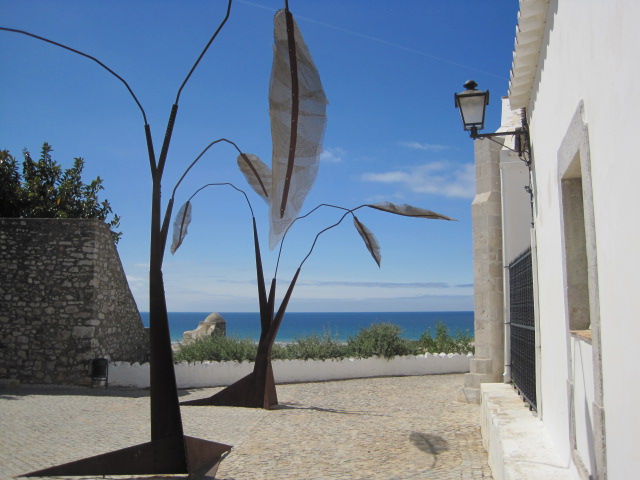 Though the addition of certain art pieces could be questioned?

You might recognise that lamp in the corner of the shot.  There are several about the village, and one made a very discreet appearance in my Lingering look at Algarve windows last week. 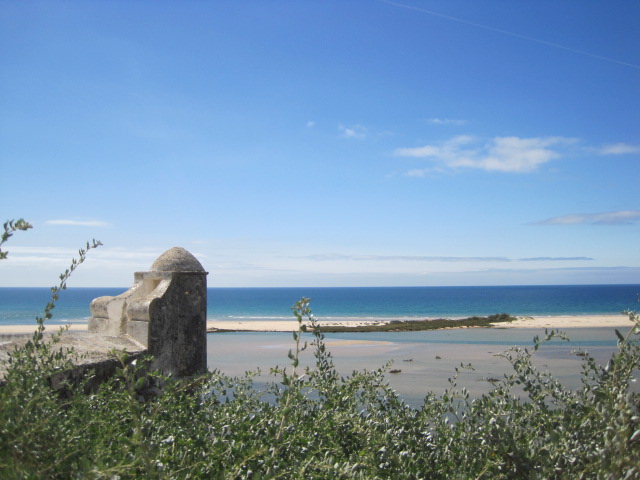 The view really doesn’t need any enhancement, does it? 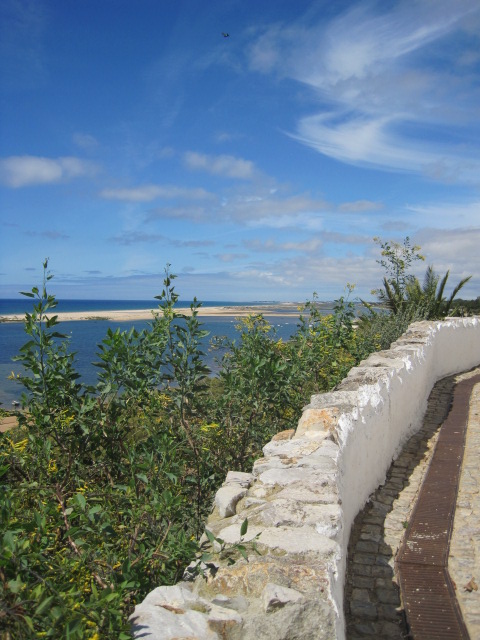 Is it any wonder I like to linger here? 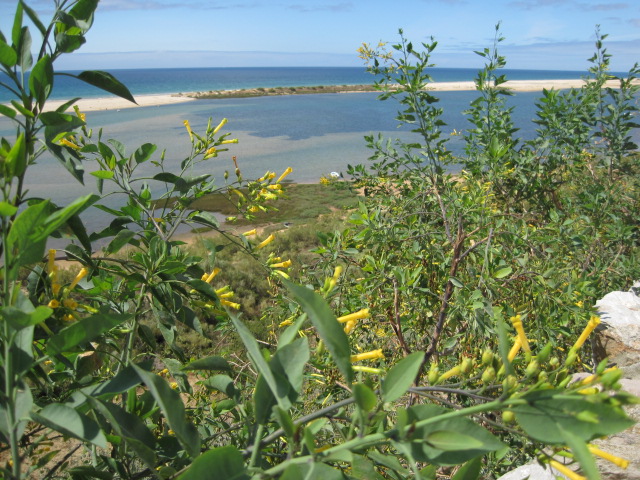 And linger some more! 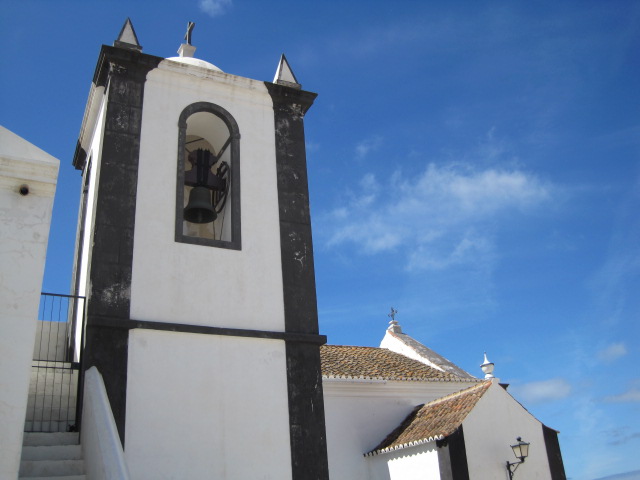 The church was busy with a funeral, so we kept a respectful distance

At this point it had become quite hot, and it was wonderful to be going down the steps to walk further along the beach, in the direction of the next small village, Fabrica.   Not so charming as Cacela Velha, but you probably wouldn’t mind owning the large property erected by a builder, right on the shoreline. 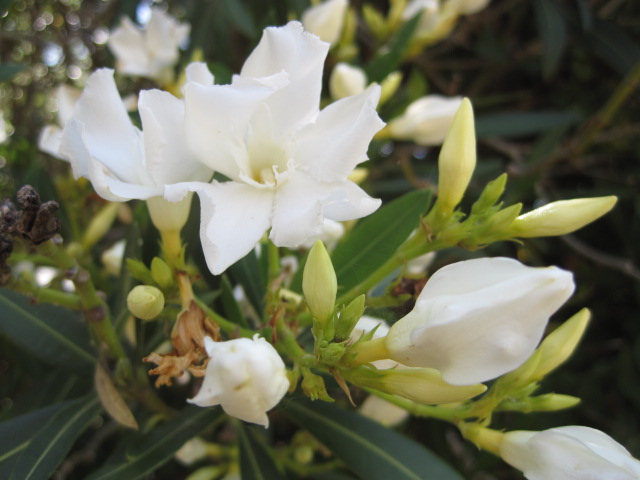 The oleander are lovely this year! 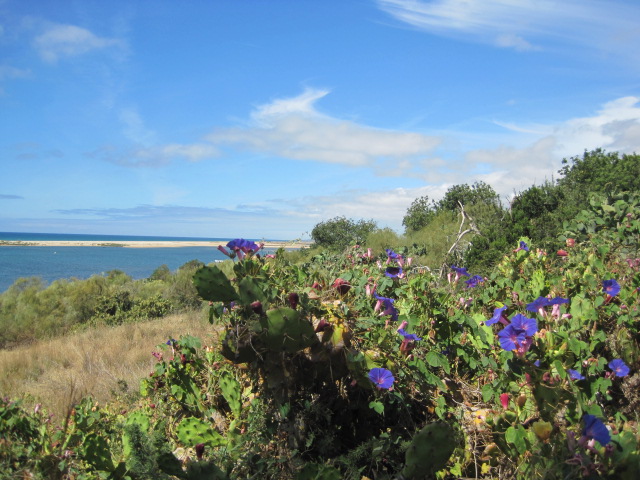 And the columbine are doing battle with the cacti.  Losing, I think! 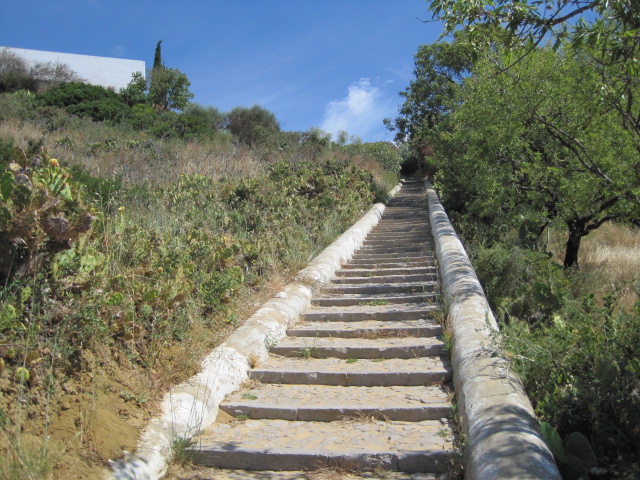 There are a LOT of steps, but down is ok! 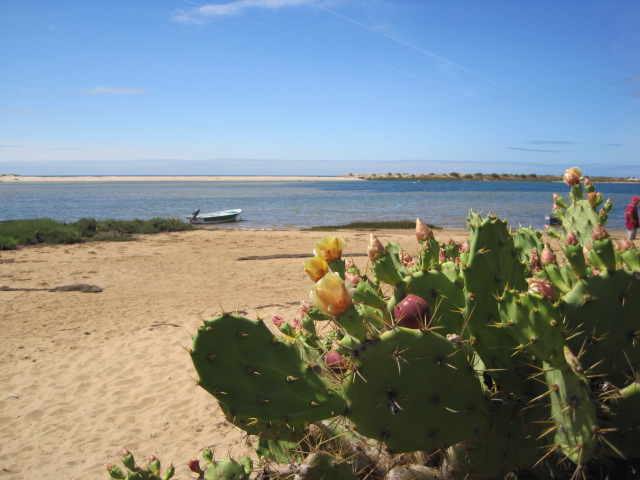 And then you’re on an unremarkable bit of beach 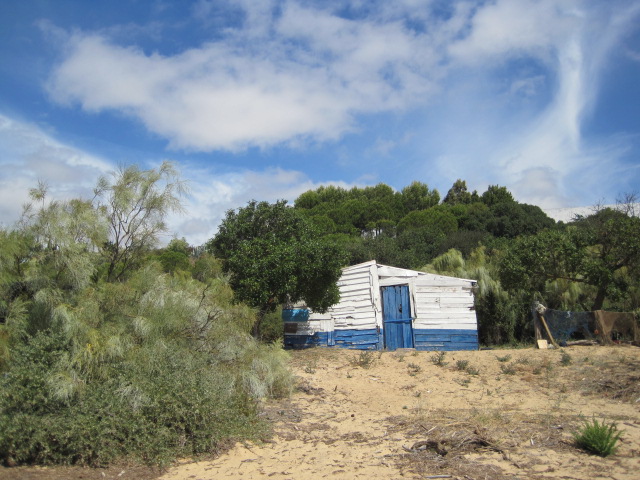 With a dilapidated but very picturesque shack 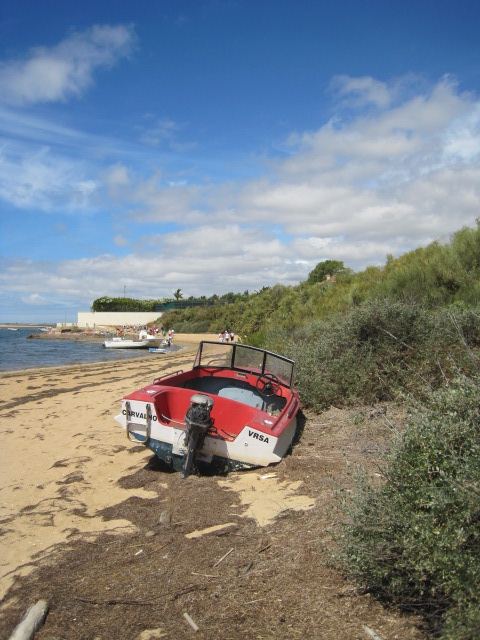 Up ahead lies Fabrica (and most of our walkers) 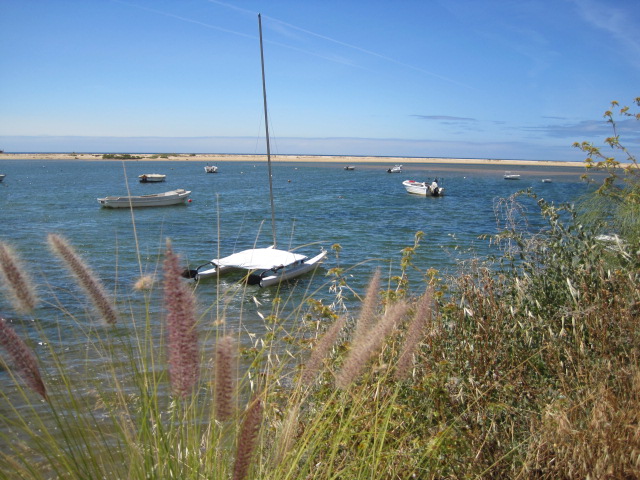 Everywhere, boats bob in the water

Have I lulled you into a false sense of security yet?  It’s so peaceful, isn’t it?  Time to head for home.

There is only one road out of Fabrica, so we turned inland and followed it, back towards Cacela Velha.  As walkers do, we were chatting away, discovering fascinating facts about the surrounds, and about each other.  We pass a couple of horses and a donkey in a field, and turn back down to the coast.  Crossing over the bridge, we are back on our original trail. 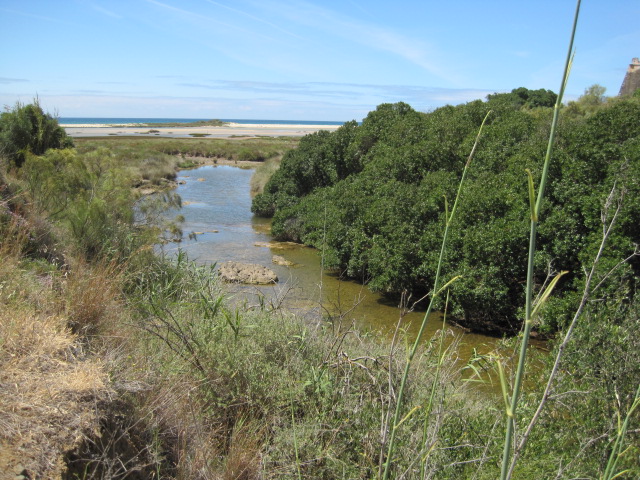 It looks innocent enough, doesn’t it?

See that lip of soil, at the forefront of the photo?  Suddenly my feet shot off the edge and I was plummeting down, towards the stream!  Fortunately, one of the men had the presence of mind to grab for me, and then I was dangling by a hand.  As my feet scrambled for non-existent footing, another of the men grabbed my other arm and I was hauled unceremoniously out.  Bruised, shaken, and the cream shorts a bit the worse for wear!

I can’t even remember whether I took that photo before or after my fall!  It doesn’t really show the wicked little curve that I missed while I was busy talking.  My husband was far ahead but said that when he heard the shout go up, he knew immediately who’d fallen! I was very lucky because I would certainly have broken something if they hadn’t halted my fall.    As it was, I escaped with a wrenched shoulder and a few cuts and bruises. 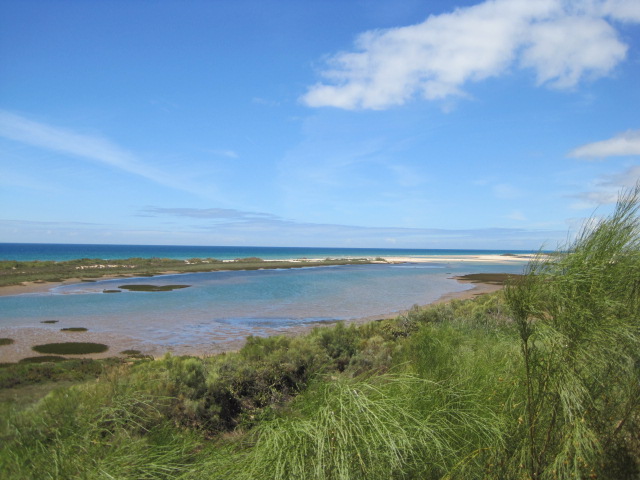 Drama over, we continued around the bay 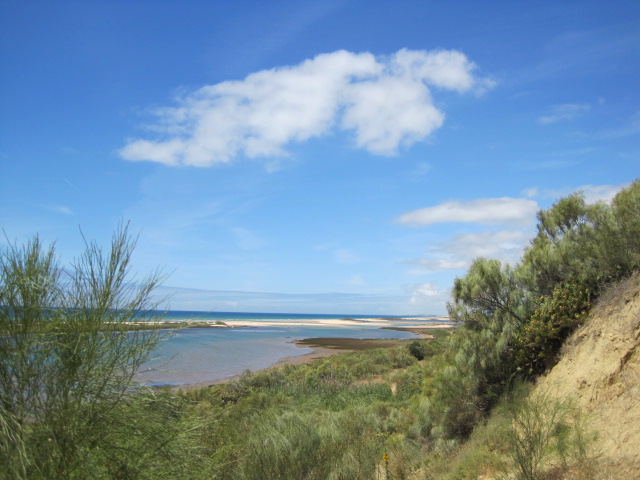 The sky the clearest of blues, with just a few wispy clouds

I have to admit, I was happy to arrive at the restaurant, on the edge of Manta Rota, where we gathered afterwards.  I needed a steadying drink!  In the shade of the vines, with good food and company, I was able to laugh about the entertainment I had provided.

I hope you enjoyed this week’s walk.  The surroundings are lovely, aren’t they?  Both Manta Rota and Cacela Velha are signed off the E125, the Algarve’s coastal road.

I have acquired a faithful little band of walkers, and I am extremely grateful for their company. Each Monday I share the walks posted in the previous week.  Please join me and my friends if you would like to.  Let’s go visiting, shall we?

This week, Drake shares a little more of his delightful birthplace, the island of Samso, Denmark :

And you should see the lush gardens Amy found in Ronda! :

Speaking of gardens, are there any more beautiful than these in Cornwall?  Thank you, Jude! :

It was a late night for Sherri, but she still managed to take me to Barrington Court! :

Come to think of it, Yvette likes to be out in the dark  :

Have a great walking week, everybody, but do be careful, won’t you?

I just realised, this is my 400th post.  No wonder I’m feeling tired!