Everywhere looks better with blue skies and Bristol’s waterfront is no exception.  I thought my luck had changed on the last day of my visit, as the skies turned to steely grey and the damp stuff arrived.  But Bristol didn’t let me down.  One cappuchino and a visit to the cathedral later, a walk along the waterfront became a distinct possibility.  So, what are we waiting for?

I have to confess that the photo above was taken from on board the Bristol Packet.  Everything doesn’t always go to plan, and when I turned up for a guided walking tour of the city I was told that it had been cancelled.  ‘Too many people in the city’, due to the Balloon Festival, was the reason given.  Nothing for it but to take to the water.  No hardship there- but I digress!

Wonderful stained glass in the cloisters

Bristol’s Floating Harbour is a huge tribute to the resourcefulness of man.  In 1809, 80 acres of tidal river were impounded to begin the taming of the estuary.  Bristol had developed at the most downstream point at which it was possible to cross the River Avon, 6 miles inland.

The tidal range of the Bristol Channel is the second greatest of any in the world.  The tide can rise and fall as much as 14 metres twice a day.  This was an advantage and a disadvantage for sailing ships in the old days.  They could be carried all the way to Bristol on the current, but equally well they could be stranded in the mud when the tide turned.  Bristol merchants had to think of a way of damming the river, allowing the ships that were in the river to stay afloat.  Thus, a ‘floating harbour’.  I found a fascinating video which explains in more detail. 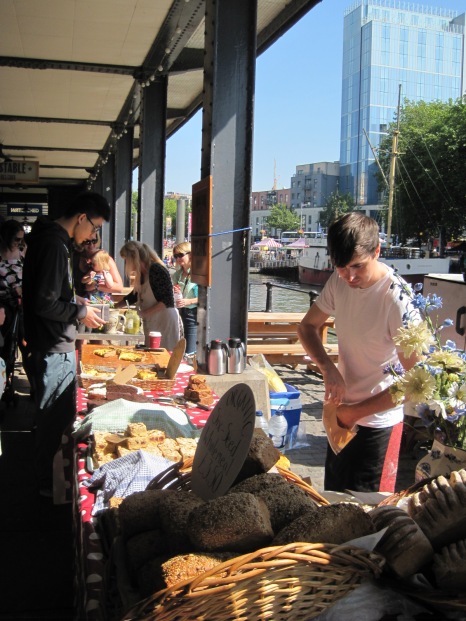 A busy spot on a Saturday

And a good place to catch a ferry

The cathedral is just beyond the Floating Harbour and I headed for Watershed, a good-looking building which now houses the Tourist Information Office.  A series of cafes and restaurants line the harbourside, and behind these are Bristol Aquarium and the Science Centre. Plenty to do on a rainy day, and interesting exhibits outside too.

The water feature was first to attract my attention

But something interesting was going on in the background! 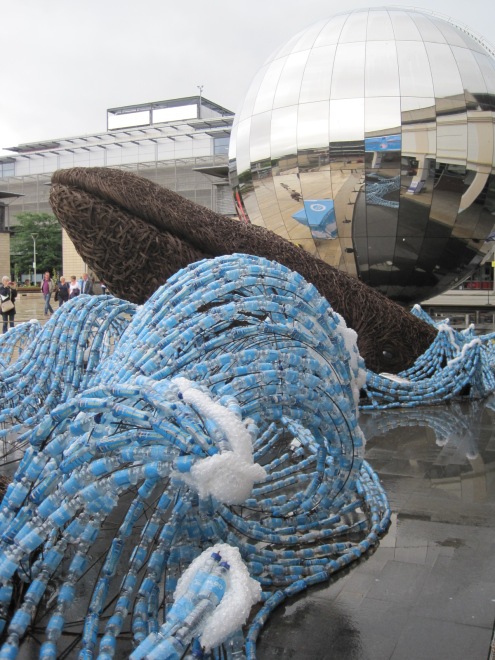 There was a solar energy project, and sculptures I rather liked too.  Black and white, for Paula. 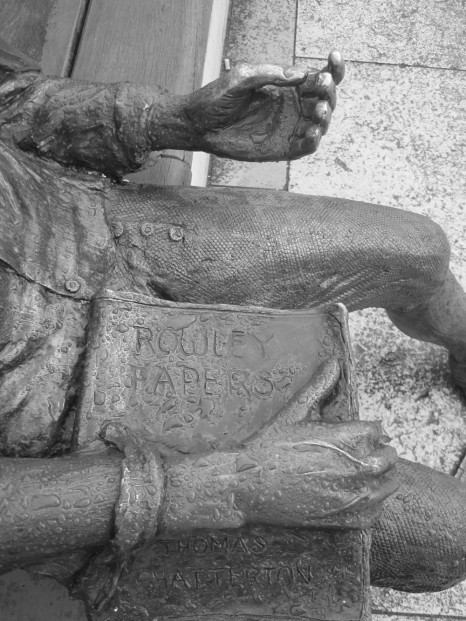 Rather damp to be a scribe!

The sky still a little heavy, I returned to the waterfront and continued to follow it inland.  Modern and stylish apartments sit back from the promenade, interspersed with cafes and bars.

Heading around the waterfront

Life on a narrowboat? 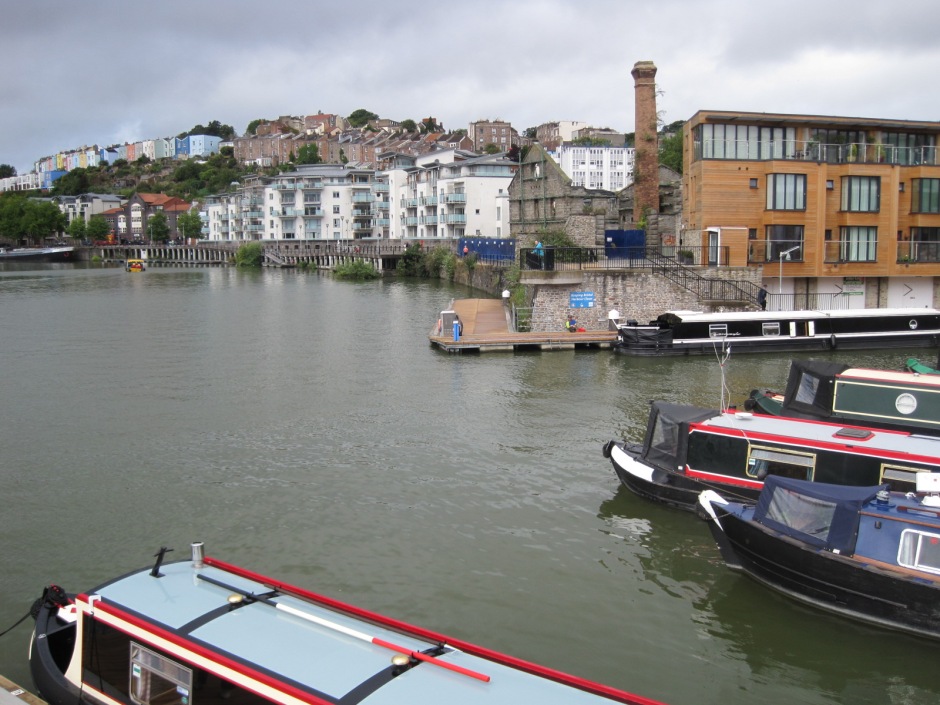 Beside the ruins of a former mill 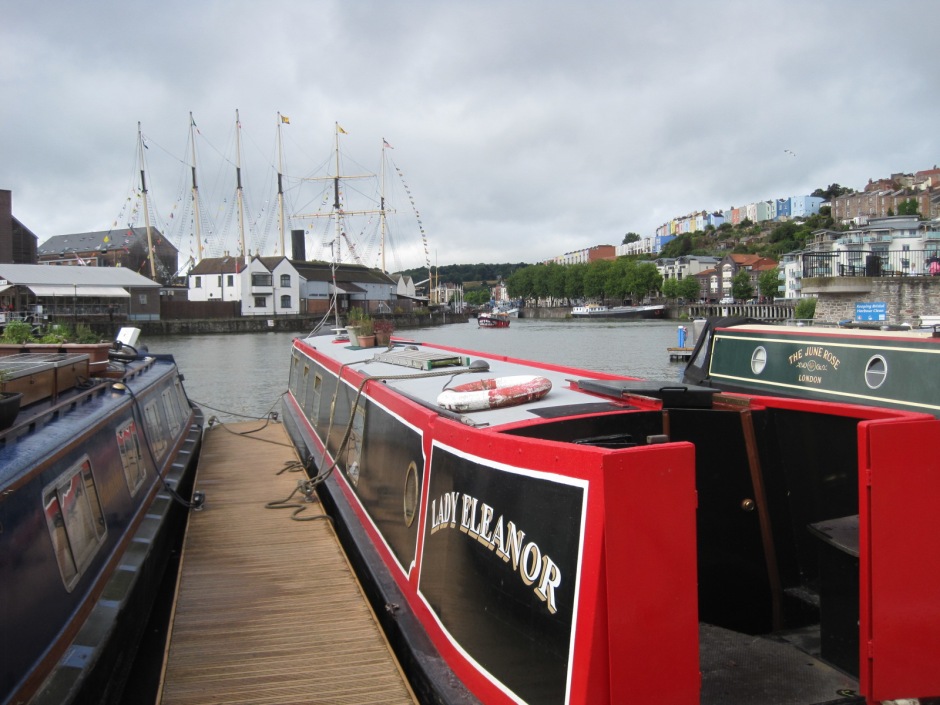 And in the background, the ‘SS Great Britain’

Isambard Kingdom Brunel, designer of the Clifton Suspension Bridge, was one of the engineering giants of the 19th century.  At age just 27 he was chief engineer of the Great Western Railway, linking Bristol to London.  He then turned his attention to trans-Atlantic travel, and his steam ship ‘The Great Western’ crossed the ocean from Bristol to New York in 1838, a journey of 15 days.

Her successor, ‘SS Great Britain’, was the world’s first iron passenger liner.  At the time of her launch in 1843 she was the largest ship in the world, and had an innovative screw propeller in place of conventional paddle wheels.  She had a long and illustrious career, sailing the world as a passenger ship for 30 years, before converting to cargo.  Old and tired, she was finally recovered from the Falklands and returned to Bristol as a hulk in 1970.  Restoration has seen her take pride of place today as a first class visitor attraction, in the dock in which she was originally built. 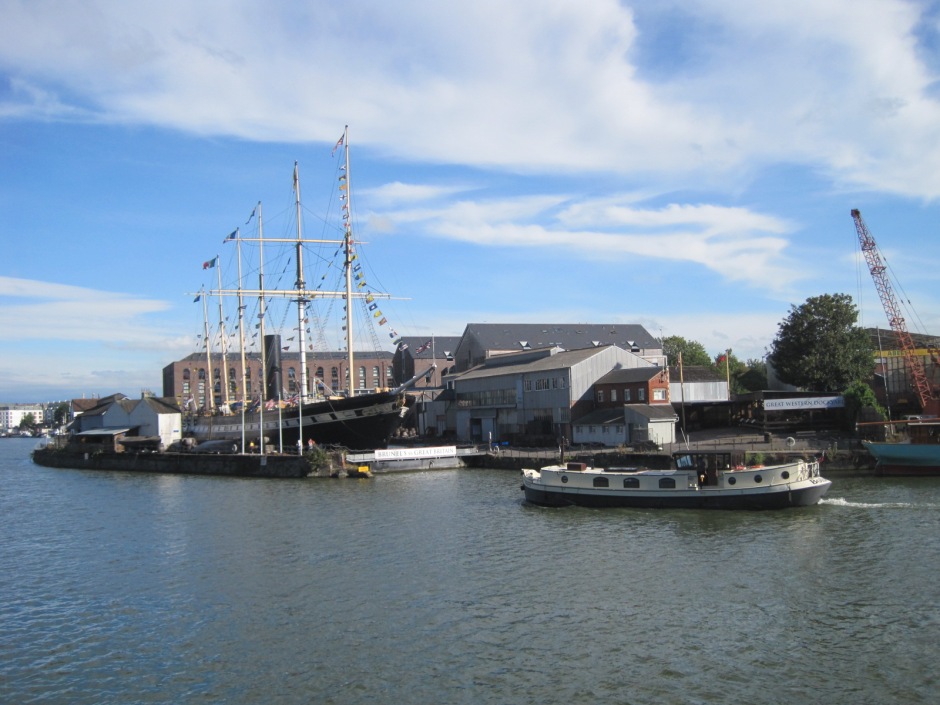 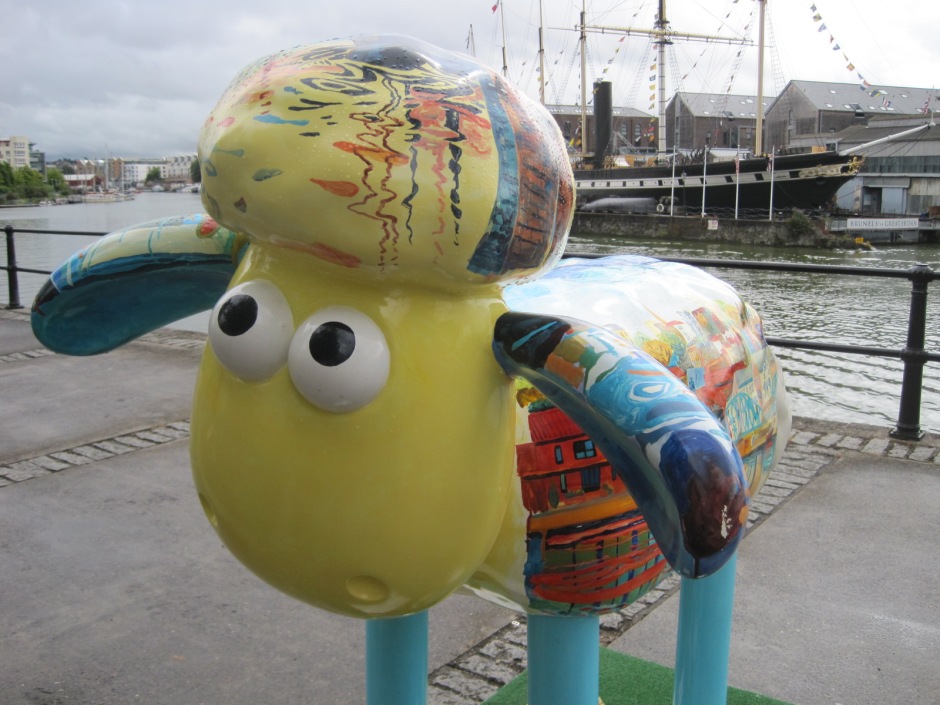 Do you remember my friend, ‘On the Waterfront’? 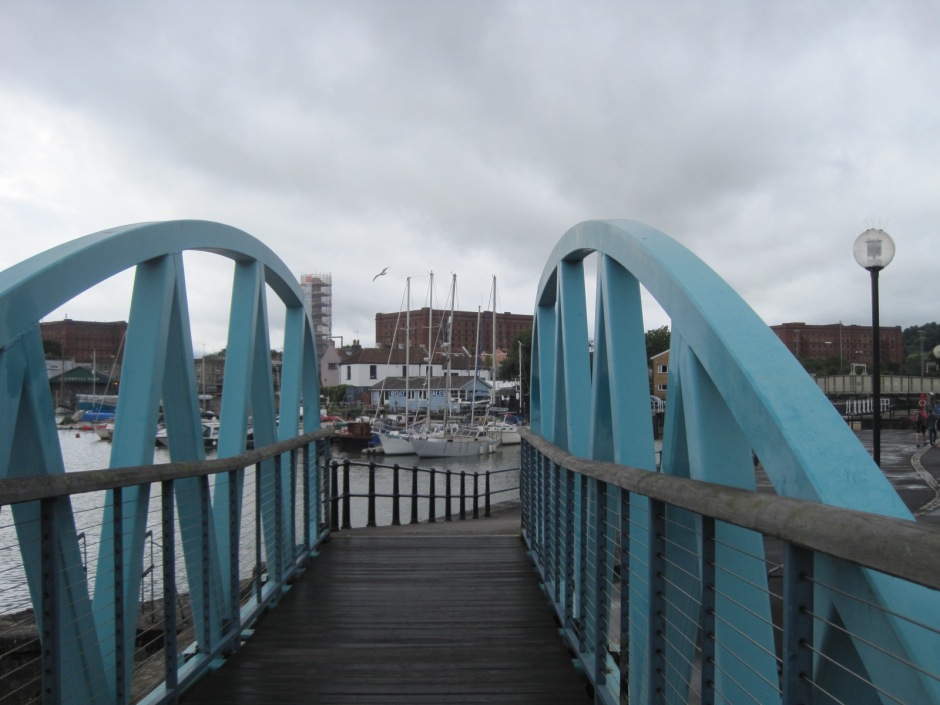 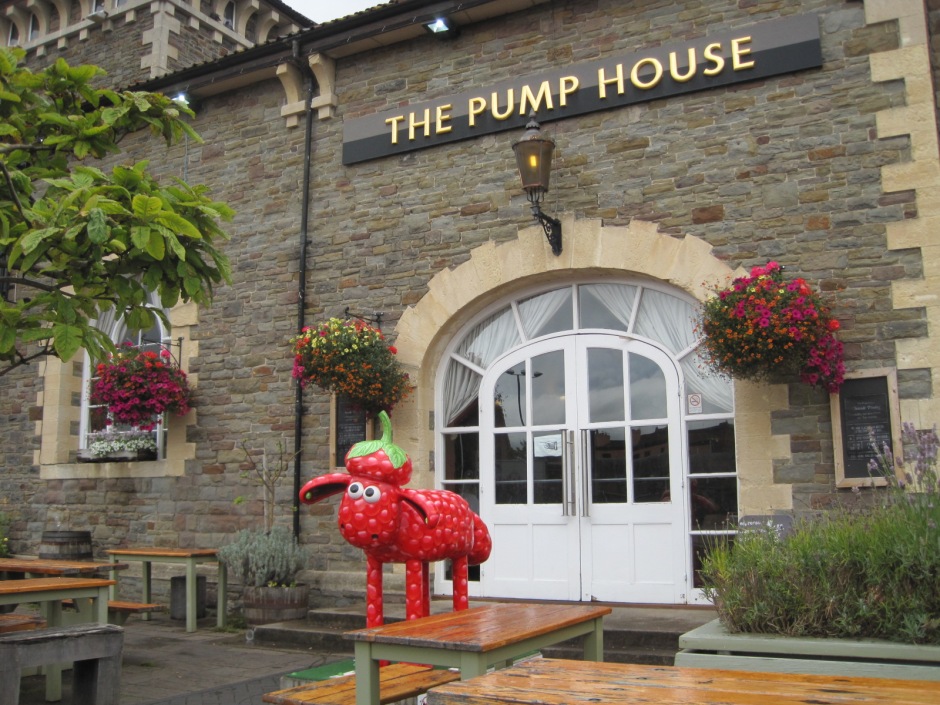 I had promised myself a visit to ‘The Pump House’ when I passed it on my long walk home from the Balloon Festival.  The building housed the original hydraulic pumping system for operating the lock gates, and is a beautiful conversion.  As luck would have it the rain was starting again- the perfect excuse.

When the rain eased, I continued on towards the lock into the Avon Gorge.  The current lock was opened in 1873 and can accommodate the largest ships that can navigate the Avon.  From here it is 6 miles by water to the mouth of the river, where it joins the Severn estuary. Ahead you can see Clifton Suspension Bridge, but beyond this point a busy road runs close to the river, and it becomes less appealing to follow.

A tour boat passes through the lock

The logical thing to do, if you have the stamina, is to cross over the harbour and return along the opposite shore of the waterfront.  You could call in at the SS Great Britain or visit the Museum of Bristol in M-Shed.  The wharves here were wiped out during heavy bombing in the Blitz and this free museum tells the story of the city.

Another alternative is to catch a ferry.  There are numerous ferry stops along the river, and you can travel all the way round to Temple Meads station (another Brunel wonder) if you wish.  It was my last day in Bristol and I wanted to see a little more of Clifton Village, so I rather foolishly clambered back up the steep side of the gorge.  Maybe we’ll have time for a look at the village another day, but for now I’m going to amble back along the quay, in my watery element.

Making the most of the sunshine

Buddleia blooming in the warmth

Peaceful at their moorings 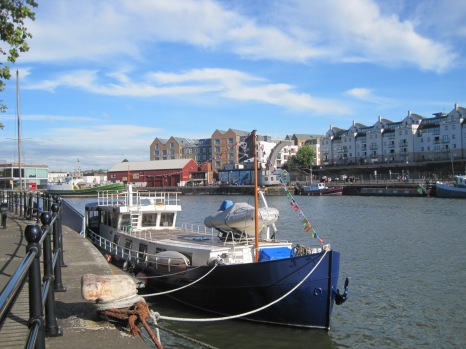 Now I’m back at my start point on St. Augustine’s Reach, named for the abbey church of St. Augustine (now Bristol Cathedral).  The Reach was the course of the River Frome, diverted into this man-made trench in 1247.  You will see from the Floating Harbour video that the water once continued into what is now Millenium Square and the heart of the city.  I have still to mention Pero’s Bridge (a reference to an enslaved African boy) and then our walking tour is done.

Looking across to the Watershed

And all ends peacefully

I expect you’re a little tired, but the good news is that I’m missing from the walks for two weeks so you can have a lovely rest.  I hope you’ve enjoyed looking at Bristol as much as I did. And now it’s surely time to put that kettle on!

Before I go I have some more wonderful walks to share with you.  Thank you so much for all the support and encouragement I receive. If you have any walks that you would like to link up, now or in the future, the details are on my Jo’s Monday walk page.  Just click on the logo.  Do, please!

I think I spotted a friend on the beach at Le Havre, with thanks to Drake!

Walk on water or almost

Not quite so cheery trawling a graveyard but the company is good.  Cheers, Jude!

Nobody does reflection like Suzanne!  Or Impressionism, come to that :

A walk in the gardens

You will not believe how gorgeous these shoes are in stained glass!  Thanks, Jackie!

But you can believe that when Amy posts photos of Banff they are fantastic!

Equally beautiful, even with a hint of snow, Ruth tiptoes along a mountain path :

A Walk on Mount Wellington

Jaspa is back this week with a South American saga :

And, responding magnificently to the WP weekly challenge….  thank you, Gilly!

Things you see on a good day

Becky has shared a wonderful reminder of why I’m looking forward to the Algarve this week :

Thanks everybody, and that just leaves me to say that bright and early on Thursday I will be heading south.  I hope to catch up with all of you before I go, and there might even be another post.  Look after yourselves, happy walking and I’ll see you soon.  While I’m gone you might like to try a Monday Escape?