Skinningrove used to be a bit of an ugly duckling.  Situated on the north east coast of England, midway between picturesque Staithes and Saltburn-by-the Sea, it has fierce competition in the beauty stakes.  You have to turn off the coast road to go looking for it, and many would not trouble.  The village is trying to attract it’s share of revenue from tourism and, with the help of a leaflet entitled ‘Skinningrove Valley Trail’, that’s where we’ll be walking today.

Our start point is by the jetty, built in the 1880s to serve the ironworks which is the reason for the village’s existence.  My leaflet describes it as looking forlorn, but funding has been acquired to renovate the jetty.  The process was just beginning at the time of my walk. 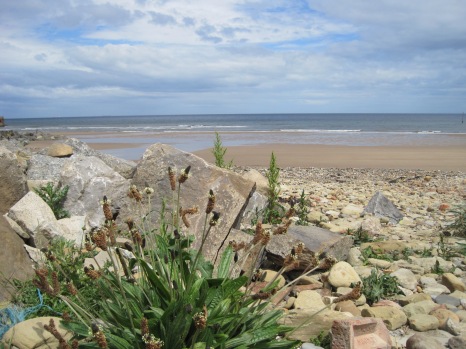 The beach by the jetty

A straggle of houses and fishing boats decorate the shoreline.  A fisherman nods ‘good morning’ and carries on painting his tired looking boat, soon to have a new lease of life.  Crossing Skinningrove Beck into the village we come swiftly upon the tribute to the Homing Pigeon Society, which reminds us that using pigeons to carry messages dates back to Ancient Greece and Rome. Locally the birds are known for their heroic activities in World War II.

Moving into the village, we head along Stone Row 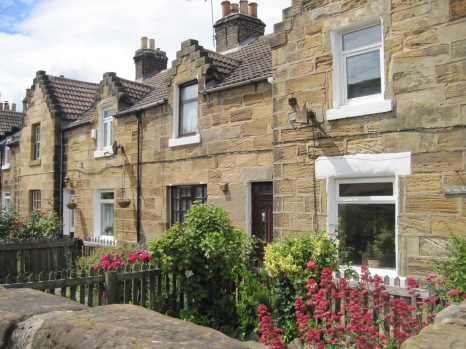 With its pretty cottage gardens

Across the beck from Stone Row you can see man-made caves, which were carved out to shelter hospital patients when bombing raids took place during the war.  And then the first of my ‘surprises’.  On the bridge, a mosaic which illustrates the story of the village.

A few ‘tango-ing’ poppies, a bench and the tip of a rusting anchor

And looking back, the man-made caves

The Square is a designated Conservation Area.  Former Timm’s Coffee House stands importantly on the corner, now converted to a guest house, ‘Moonfleet’, rather sadly.  Part of the building is Grade II listed, having started life in 1704 as Skinningrove Hall. In the 19th century it was developed as a hotel by the Maynard family, who named it Timm’s Coffee House after the coffee houses that were then popular in London. 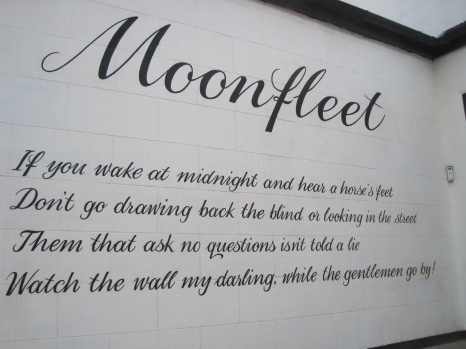 An ‘unusual’ enough bench, for Jude?

Another of my ‘surprises’ coming up next.  I spent many a happy minute exclaiming over the mosaics on the side of Riverside Building. It began life as a school in 1884 and remained so till the late 1990s.  Since then it has become a base for community projects and activities, and is run by a group of volunteers.  I pop back for a cuppa and a gossip with the locals at the end of my walk, but for now let’s just enjoy the mosaics.

This one illustrates the major floods of 2000

You may recognise the homing pigeon 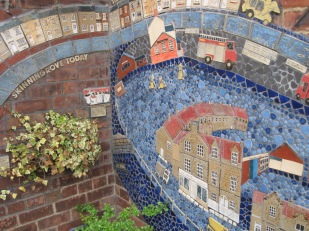 The floods were extensive 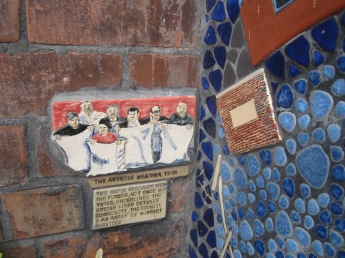 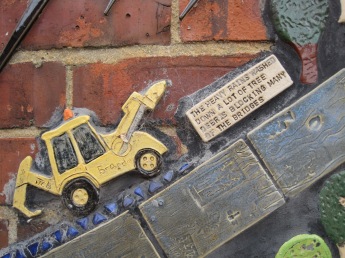 The cars floating in the streets

And the rescue helicopter

The building is no work of art, but the efforts of Glynis Johnson and the school children who were involved are delightful.  There are two themes- the floods and the Story of the Merman. Allegedly a ‘sea-man’ was once caught by the local fisherfolk.  He lived on raw fish for a number of days but then managed to escape.  Sometimes, when the sea is calm, a hideous groaning can be heard and the fishermen are afraid to go to sea! 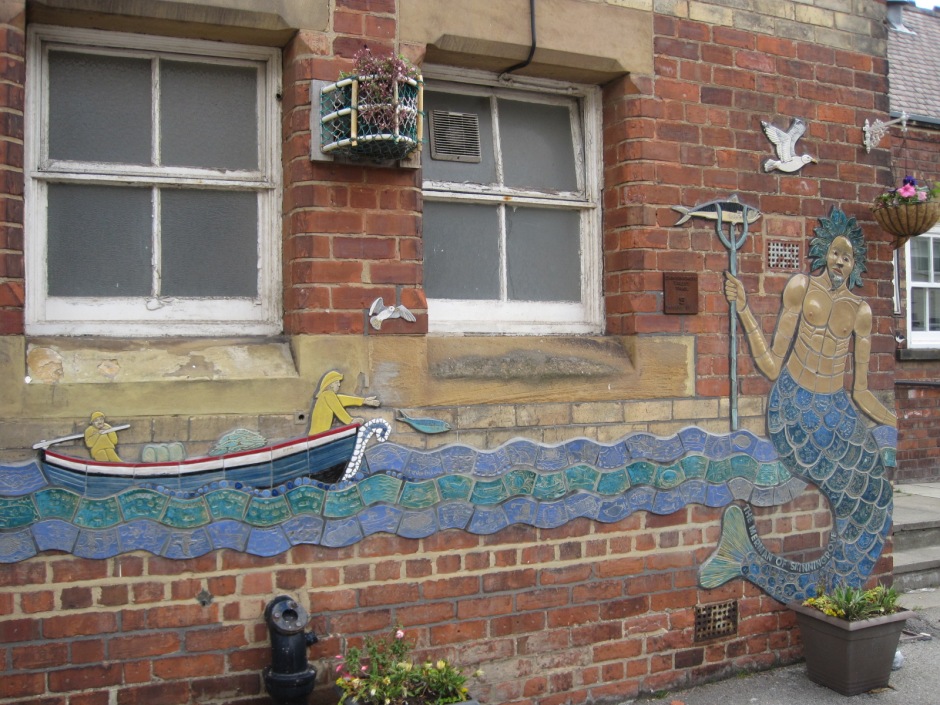 The Story of the Merman

And a watchful dog

Skinningrove was a mining village, though the evidence is harder to find these days.  The rust red water in the beck vividly testifies to the presence of iron, and the remains of an entrance to the mine can still be seen.  I had intended to visit the Cleveland Ironstone Mining Museum but was not convinced that I wanted to go underground.  During the war the mine was regularly used for shelter, and a school log book entry for 9th September, 1915 reads “Owing to Zeppelin raid and the children having been in the mines a good part of last night, we have been obliged to close school today”.

I later discovered that the guided tour takes an hour and a half.  At Christmas, Santa delivers his sack of toys along the miner’s track, without any necessity to go below ground.  Maybe I’ll come back then! 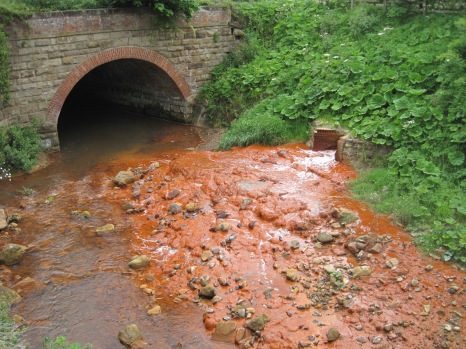 One more ‘surprise’ in store.  A mural on Doorstep Green portrays ‘Evolution of Life in the Sea’. It was created by Philippa Threlfall, using materials from Skinningrove beach, and with the help of children from the former Rosecroft School.

Again, click on a photo to see it in detail 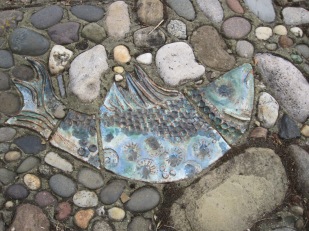 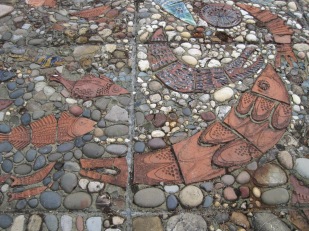 The Valley Trail climbs out of the village and across the A174 (a busy road), following the beck into Whitecliff Wood.  Curiosity impelled me to take a look, but you could simply retrace your steps.  Over the road I pass by an animal sanctuary, where the animals appear quite content.  The adjoining house has lupins by the fence and I pause, remembering my mother, who always had roses and lupins in her garden.  The trail soon peters out as the beck flows through a culvert under the railway embankment.

Looking back at the site of the former Kilton Mill 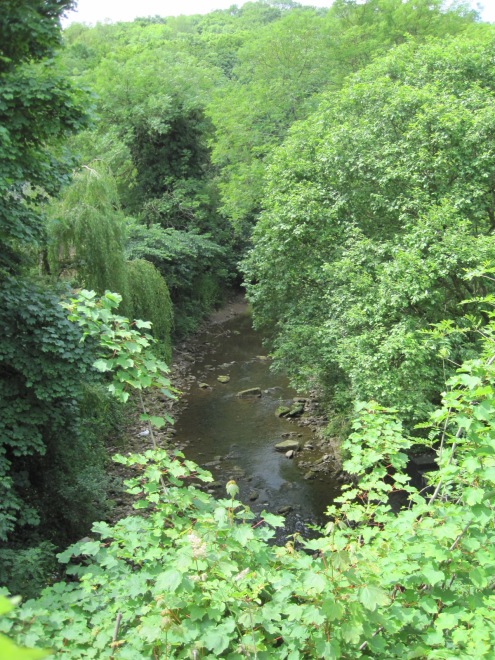 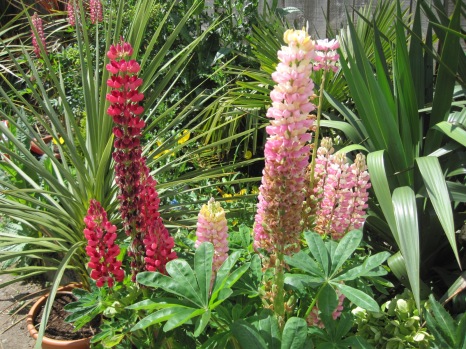 Back in Skinningrove, I find the friendly ‘staff’ in Riverside Building in a lull between customers.  I consume the cheapest toasted teacake and mug of coffee I’ve ever had, while they tell me about life in the village.  Everything is done on a voluntary basis and they pool their expertise. Apparently a little gift shop is set to open up soon.  If you pass that way, drop in and say ‘hi’, and you can pick up a leaflet on this trail.  Here they are, on Facebook.

Heading for home now, but not before I take a look at ‘Repus’- the fishing coble which serves as a memorial to those lost at sea.

And another ‘unusual bench’ 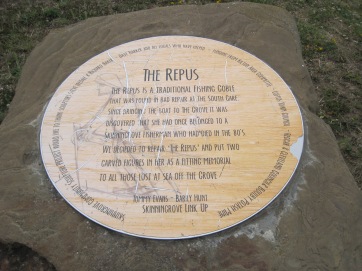 Leads the way to the ‘Repus’ memorial

The coble, facing out to sea

The last bench reminds me that this is the midway point along the Cleveland Way, a 110 mile walk between Helmsley and Filey.  Now there’s a challenge!  If you prefer something a little easier, why not drop in on Jude for her Bench challenge?

I’m a little further down the coast today, walking on the cliff tops at Whitby, so I may be late in answering your comments.  I suspect you’ll have plenty to keep you busy in the meantime. Thanks for reading!

Once again I’d like to say a huge thank you to those who have contributed to making my Jo’s Monday walk a success.  If you’d like to join in, click on the logo for details.  Time to put the kettle on and settle back for a read.  I think I need some toast, too.

A busy spot, the Gare de L’Est!  Please take your time and watch the video.  Thanks, Drake!

Hope you had good Canada and Independence Days, all those who celebrate it!

Inspirational shots from Amy!  She’s on holiday this week.  Treats in store!

A lighthouse, and some stunning thrift?  Cornwall, of course!  Many thanks, Jude :

Wild thyme and Lady’s Bedstraw, from Tish, but not very much sleep, unfortunately!

Return to Windmill Hill: Of Grasshopper stalking, Lady’s Bedstraw and other random discoveries

Meanwhile Pauline is up at the crack of dawn to capture the sunlight on the water :

Early morning walk along the beach…

And Ruth has gone to the other extreme.  Both extremely beautiful!

A walk in the moonlight

Thank you for finding time to read these wonderful contributions.  I hope I haven’t ‘wittered on’ too long.  Maybe something shorter next week? (though this trail is only a mile and a half long) Grab some sun, if you can, and I’ll see you then.