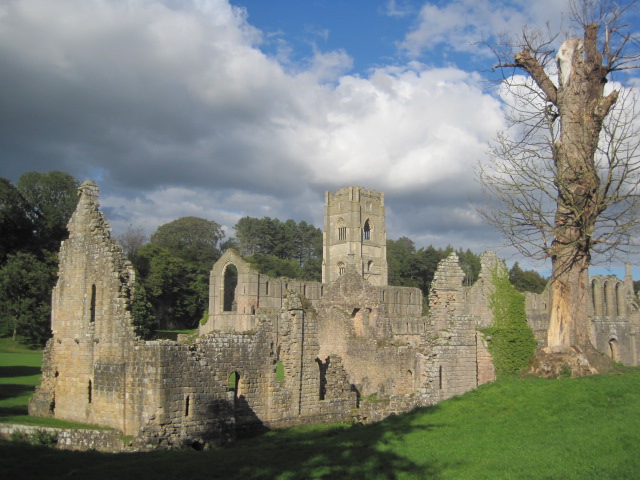 The lovely ruins of Fountains Abbey

Classic English beauty combines with a watery world for this week’s walk at Studley Royal, in Yorkshire.  I’ve been there several times and always been cursed with dismal weather.  The balmy Autumn that we’ve been experiencing was just perfect for this visit.  A Cistercian Abbey, water gardens and a deer park- irresistible?  I think so!  But don’t forget to take your purse.  Being a National Trust property, it doesn’t come cheap. (currently £10.50- no concessions, unless you are a National Trust member)

Some things don’t change.  The monks who came here in 1132 were pretty good at amassing money too.  Thirteen Benedictine monks left St. Mary’s Abbey in York to found a Cistercian Abbey in this valley.  It became one of the richest in Europe.  Something that has changed, since my last visit, is the approach to the park.  You used to be able to drive into the estate through the deer park, but traffic now is all routed via the Visitor Centre.  Pick up a map at reception, and let’s go.

The ruins are extensive and Fountains Abbey Mill is the only 12th century Cistercian cornmill left in the UK.  It was in continuous use until 1927, and today houses an interactive exhibition and the water wheel, which can still grind corn.

Numerous pheasants scuttle around the grounds

And you follow the stream, looking back at the Abbey from time to time

As it recedes into the distance

If you’ve never been here before, you will almost certainly be impressed with what comes next. After the dissolution of the monasteries in 1539, the Abbey buildings and over 500 acres of land were sold by the Crown.  The property was passed down through several generations until it was inherited by John Aislabie, in 1693.  He was a socially and politically ambitious man and became Chancellor of the Exchequer in 1718, but his involvement in the South Sea Bubble financial scandal had him expelled from Parliament.  On his return to Yorkshire, he turned the wooded valley of the River Skell into one of England’s most spectacular Georgian water gardens. 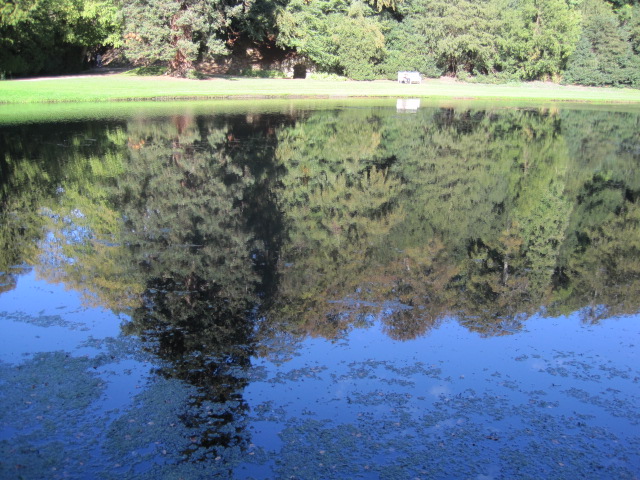 A basin of water opens up before you

Beyond the trees, a further body of water 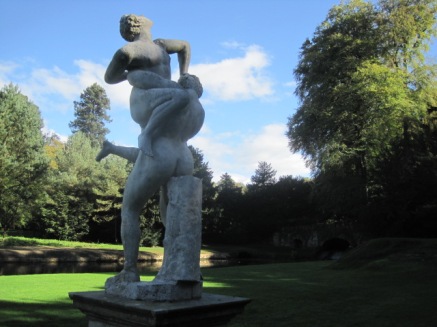 Which stretches off into the distance 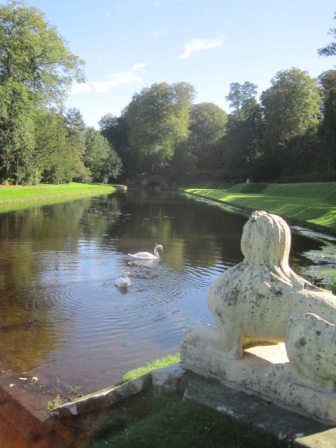 And the sphinx looks idly on

Reflections sparkle in the lily pond 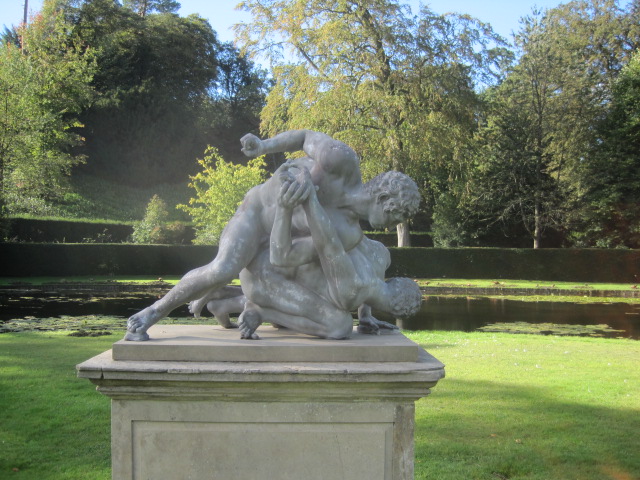 Yet more sculptures rough and tumble

A group of volunteer gardeners are raking pond weed from the canals- a pleasant enough occupation on such a sunny afternoon.  The curve of the Moon Pond stretches ahead, the pillars of the Temple of Piety a focal point on the far side.  Originally the Temple of Hercules, it is believed to have been renamed when John Aislabie’s son, William, commissioned a bas relief wall sculpture inside the temple, after his father’s death.

The Temple of Piety, beyond the Moon Pond

Looking out from between the pillars 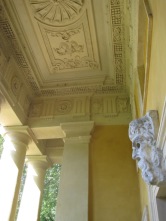 And looking up, inside the portico

You need to walk along the canal and cross over a narrow bridge to reach the Temple of Piety. From the bridge there’s a good view across the lake to the deer park.  I didn’t spot any deer at that distance, but was diverted by one of the park’s follies, the Octagon Tower.  A neo-Gothic castle, it looked to me very inviting, but sadly I couldn’t climb it.  Beneath it lies a Serpentine Tunnel, originally designed to give people a bit of a fright at garden parties.

The lake, with the deer park in the distance

The Octagon Tower, nestling in the trees 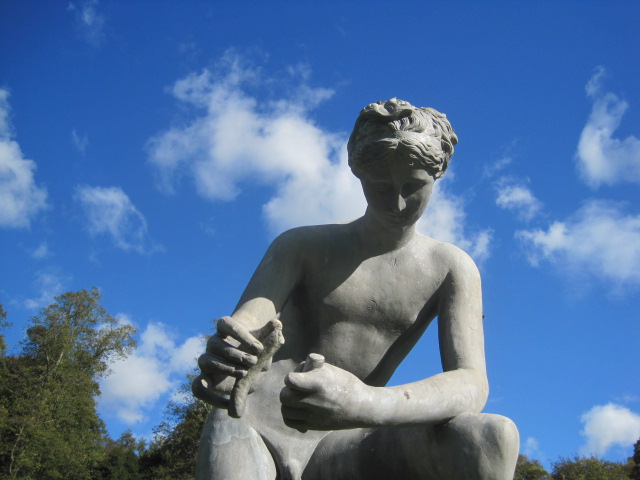 I’m not sure what she was holding?

In her beautiful watery world

I couldn’t climb the tower, but I did find somewhere to look down onto the park.  A sign directing me to Anne Boleyn’s Seat and Surprise View could not be ignored.  I’ll spare you the climb because it was pretty steep, but I think you’d like the view.  You will have an advantage over Anne Boleyn, who never actually saw it.  That’s not because she didn’t have a head, but the name does come from a headless statue. 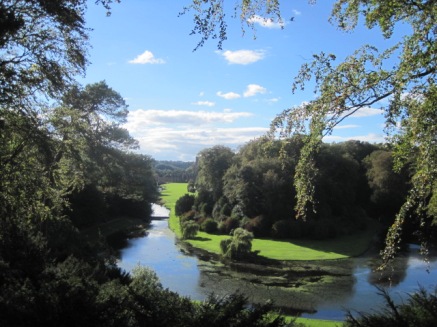 Back on the path, you can return along the opposite side of the canal, steadily approaching the Abbey.  There you will have a number of diversions.  You can visit the Mill or the tea rooms, and Fountains Hall is a stately exhibition space. (with holiday flats to let!)  Any children with you will love the interpretation centre at the Porter’s Lodge. (I did too!)  And if you have time and energy to spare, there’s the Gothic extravagance of St. Mary’s Church and a stroll round the deer park. 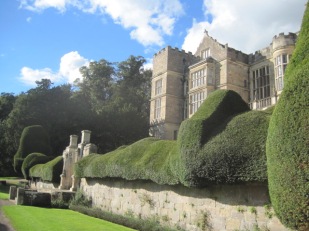 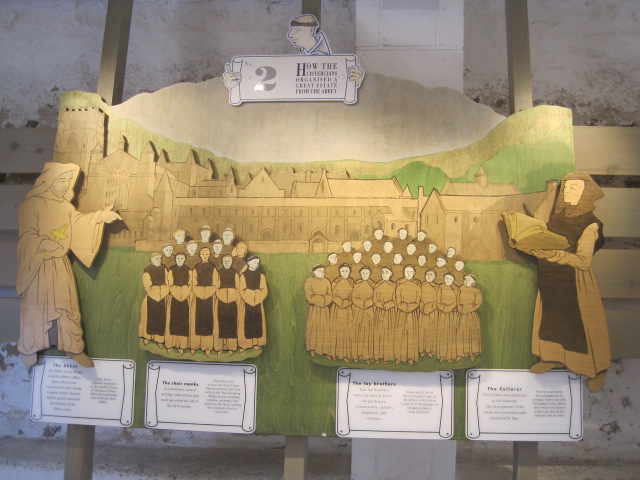 Fun in the Porter’s Lodge

Don’t take my word for all this.  The National Trust website will tell you the whole story and provide instructions on how to get there.  I think that you would enjoy this World Heritage Site.  I know I did.  And now it really must be time to put the kettle on, don’t you think?

Click on the logo to visit my Jo’s Monday walk page for details on how to join in.  As always we have a wonderful variety of walks to share.

How about a sample of Finnish nature with Vasilis?  I hope you’ve met before?  And the lingonberry tart looks so good! :

Yvette’s taking street portraits and searching for a missing lady. Please share this one :

Escape from the Cityscape

Amy has been having some more fun with her bird friends  :

And Jude has the most delicious selection of Michaelmas Daisies you ever saw!  :

Welcome a Blogspotter please!  Violet Sky has a very fun post to add to the collection.  Do go and say ‘hello’.  :

Pauline is in transit again, but has been kind enough to share a trip ‘over the border’ to New South Wales.  Safe travels, Pauline and Jack!  :

That’s it for this week.  It just remains to wish you all ‘happy walking!’