Some posts just kind of lure you in!  You could do a Challenge post every day of the week and two on Sundays, if you had the time.  Mostly I look, admire, make a mental note, blink twice and the next Challenge is there before me.  Somehow I’ve completed all my chores with time to spare this weekend, and without further ado, I present Bridges, at the kind invitation of Ailsa at Where’s My Backpack. 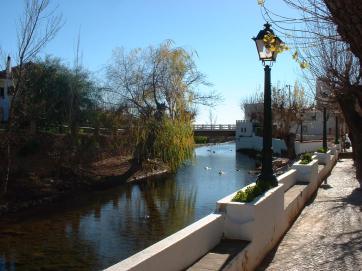 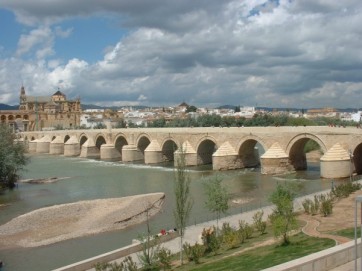 The beautiful approach to Cordoba and the incomparable Mesquita 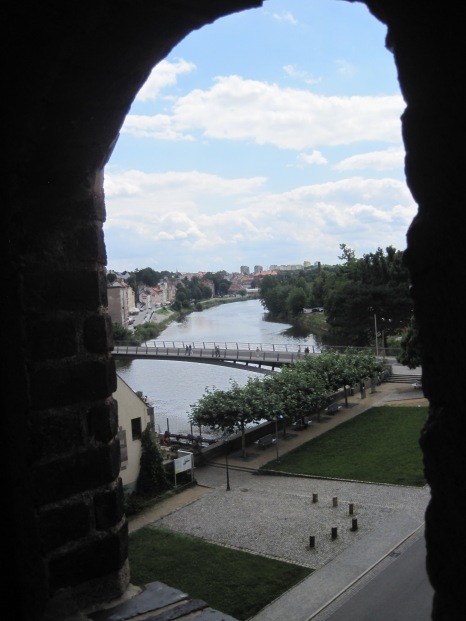 A bridge spanning 2 countries, Poland and Germany, at Zgorzelec 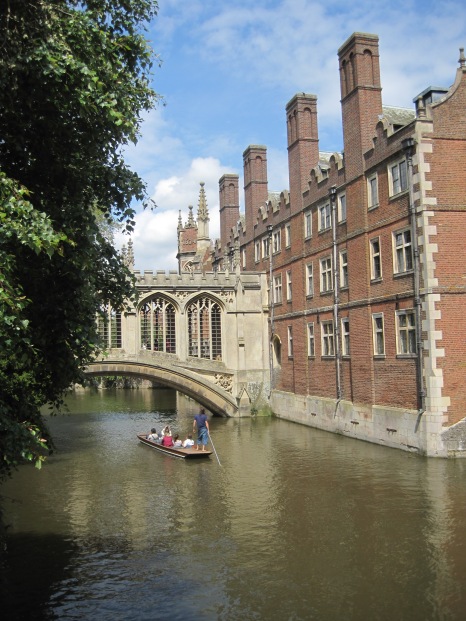 An alternative “Bridge of Sighs”, in Cambridge

The Shard, still at construction stage, beyond Tower Bridge 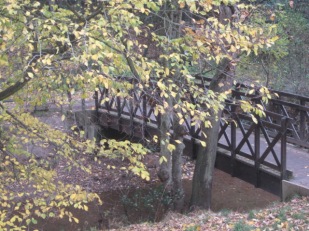 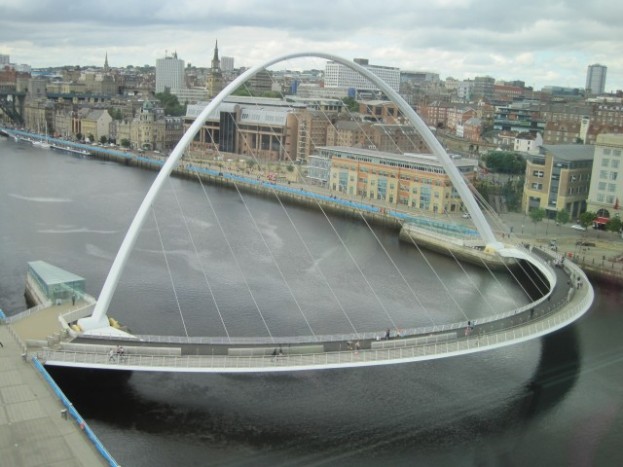 The setting sun over one of the two road bridges, Tavira

And it wouldn’t be complete without my favourite bridge, and we’re back with the subtle colour.

The wonderful thing about bridges for me is that often they span my favourite element, water.  I love to lean over a bridge and gaze into the depths.  Sometimes they even create beautiful reflections as a bonus- two for the price of one.  Putting them side by side has taken longer than I expected, but now that I have, I’m taken with the contrast between my surly northern skies and the gentler images of Southern Europe.

Click on a photo to see them in gallery form.

Thanks, Ailsa.  I’ve enjoyed my Sunday leisure time.  Come bridge spotting with me over at Ailsa’s?

Grażyna is the daughter of Dad’s oldest living brother, my Uncle Włodek.  He lives in Zgorzelec, and this post just seemed to follow on naturally from that one.  Grażyna was born in Zgorzelec, but when she contacted me, one of the first of my 26 Polish cousins to do so, I was astounded to find that she was living here in England, in Norfolk, with her husband and 3 sons.  Jarek is a boat builder by trade, and has built his own beautiful little sailing boat, so whenever they can, they go sailing on the Broads. 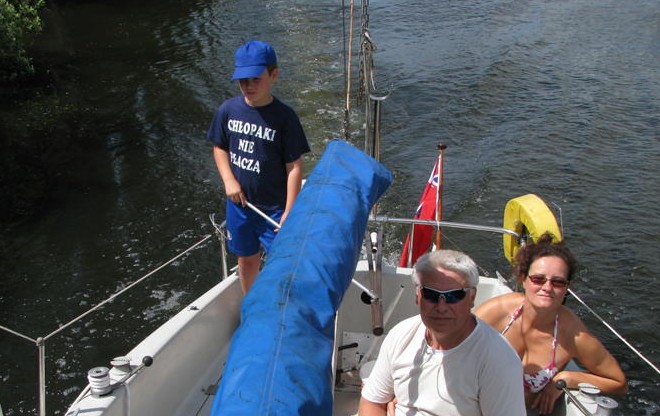 And having fun with younger brother, Arek!

Norfolk isn’t exactly on our doorstep, but it’s much closer than Poland, so we’ve had the opportunity to get together a few times.  They came to the North East for Dad’s 80th birthday, soon after he was reunited with his Polish family.  We went exploring Norfolk with them the following year.  And their visit when the Tall Ships were here in 2010 was a fabulous occasion never to be forgotten.

We met up again in Zakopane, in Poland, for the occasion of Adam and Marta’s Silver Wedding.  That was my first opportunity to properly meet Grażyna’s brother Wojtek and his family, who live in Wrocław.  We had great fun entertaining the six youngsters in the hotel gardens in Poronin.

They don’t have too many opportunities to get together, but last year Wojtek and son Mateusz came to Norfolk to celebrate Grażyna’s two youngest boys First Communion.  We arranged then that my niece Basia, Wojtek’s oldest daughter, would come and stay with me here in Hartlepool this summer.  Of course, I got to stay with them in Wrocław first.  More than a fair exchange!

Dad, the priest, and Grazyna’s family

So that’s how we came to be together again with Grażyna, just briefly, this August.  She came to collect Basia for her first visit to Norfolk, and return home to Poland. Our get togethers are always very emotional, but we have a lot of fun too.  We all love the sea and boats, and we have an excellent free museum, perfect for those not so sunny days.  The Museum of Harlepool was the source of lots of mirth, as well as painlessly imparted knowledge. 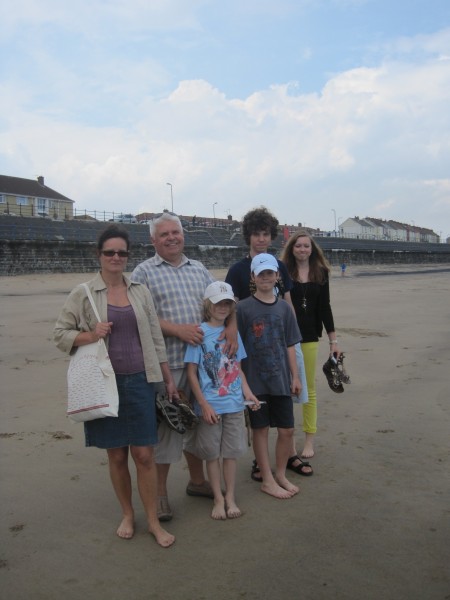 We went to the beach first, but rain stopped play

Not before we’d created the SS Polska gunboat though

So, the Museum of Hartlepool it was : 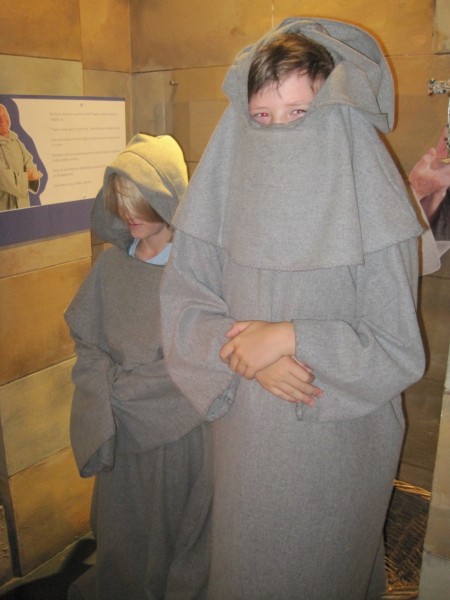 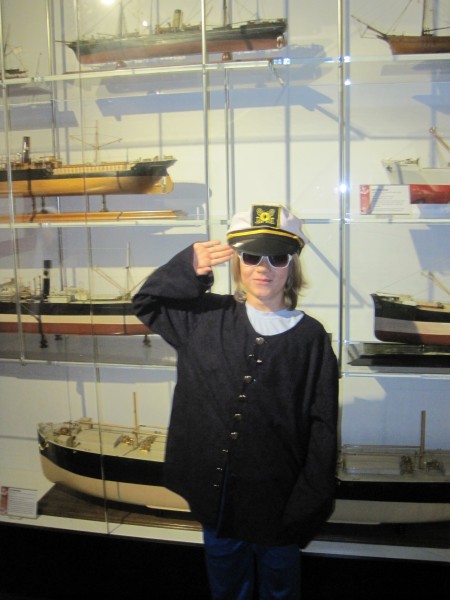 A nautical look might be better for Arek, affectionately known as “Blondie” 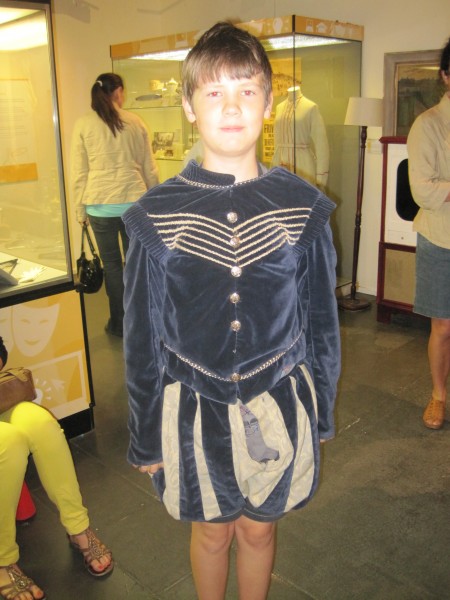 We weren’t sure if this was a good look, but Mariusz liked it. 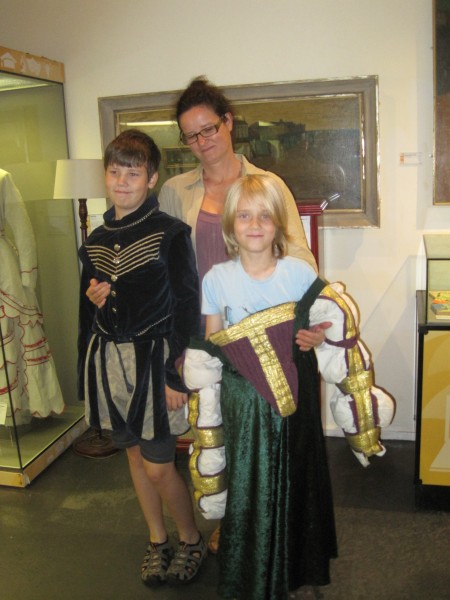 And there was no way to keep Arek out of the act!

They were more themselves in a boat, of course

Grażyna is a loving and wonderful mother, and she makes the most delicious cakes.  She brought a huge carob cake with her this trip and it was gone in a blink.  She is also the most affectionate of cousins.

It has been a privilege and a pleasure to watch this new family of mine growing up.  If you’re not familiar with Dad’s story it’s told in more detail here.

This post is part of my personal A-Z of Poland.  The idea was Julie Dawn Fox’s and I am indebted to her for the opportunity to share my Polish story with you.  If you would like to join in, you can find the details on this link, or the banner below.

I expect some of you have heard of Zakopane, in the Tatry Mountains in Poland?  Zgorzelec, maybe not, but it is a town of great significance for me.  It’s the home of my Uncle Włodek, whom I was lucky enough to visit this Summer.

River Neisse links the twin towns of Zgorzelec and Gorlitz

Until 1945 Zgorzelec and Görlitz were one town, with a shared history.  Görlitz (or Gorlice, as it was then known) was founded in 1354 by German settlers.  In the 13th century it became rich due to its location on the Via Regia.  This former trade route is one of the oldest in Europe, and reached from Kiev to Santiago de Compostela.  The town became a cultural centre, led by mystic and theologian Jakob Böhme, who inspired progressive thinkers like Goethe.

I don’t pretend to understand the complications involved, but the town has since been part of Bohemia, Saxony and Silesia.  At the end of World War 2, which scattered families like my Dad’s far and wide, the Rivers Neisse and Oder were established as the border between Poland and East Germany, and the town was split apart.   The German part retained the name Görlitz, and the Polish part became Zgorzelec. 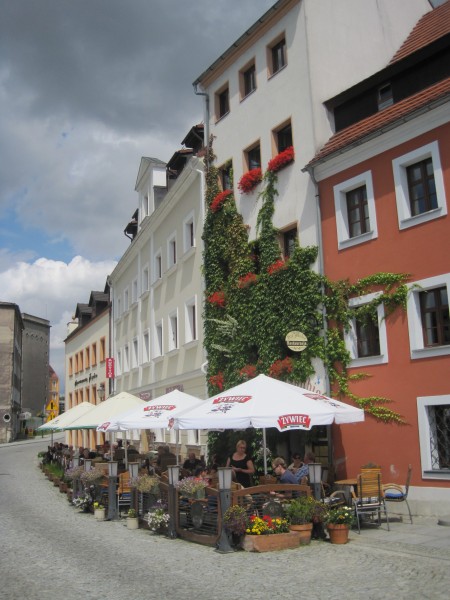 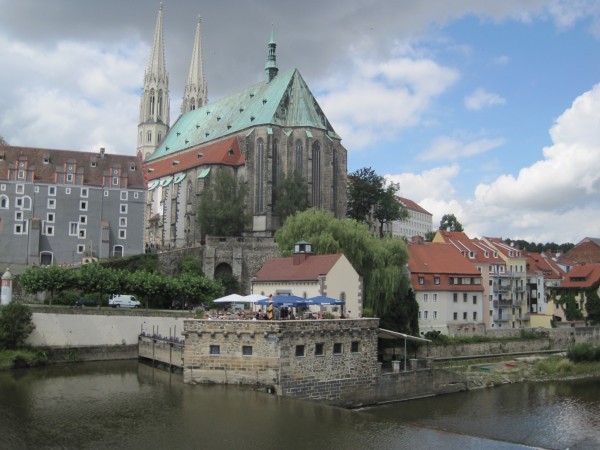 Peterskirche across the river in Gorlitz

I have to admit to a degree of fascination with this divided town, and I had never before set foot in Germany, so I was delighted when a visit to uncle’s home presented me with the opportunity.  I didn’t really know what to expect as I approached the Old Town Bridge.  Certainly not the 5-tier grain elevator, emblazoned with the effigy of a face and palm.  It was designed to represent an Artistic Image of a United Europe.

The grain elevator with its symbol of unity

The elevator and St. Peter and Pauls

The bridge itself was blown up by the retreating Germans in 1945, but has been replaced with a modern steel structure, reuniting the towns.  Peterskirche, or the church of St. Peter and Paul, is a mighty building, dating from 1230.  It is famous for its sun organ, depicting 18 suns among its pipes. 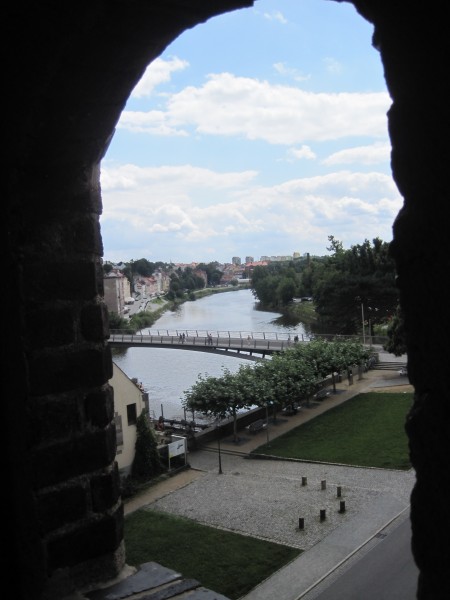 The atmosphere changes completely as you step off the bridge into the cobbled streets of Görlitz, and are at once in “Bavaria” as I had always imagined it.  I pause to pick up a street map and my ears struggle with the unfamiliar sound of the German language.  A street festival is in full swing, complete with oompah music.  You can get a flavour of it from Collectibles, which I wrote for Jakesprinter’s Sunday Post. 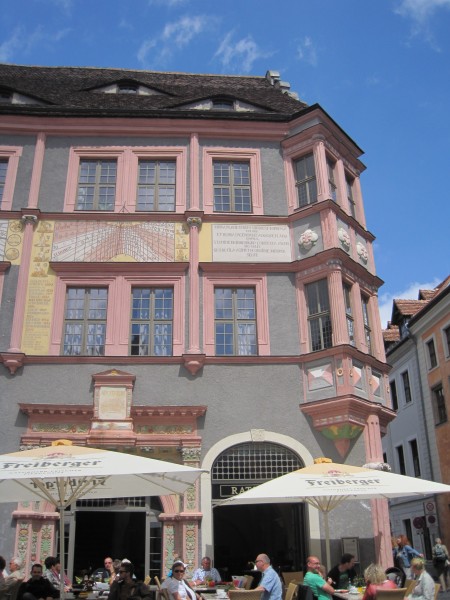 Don’t you love the pastel colours? 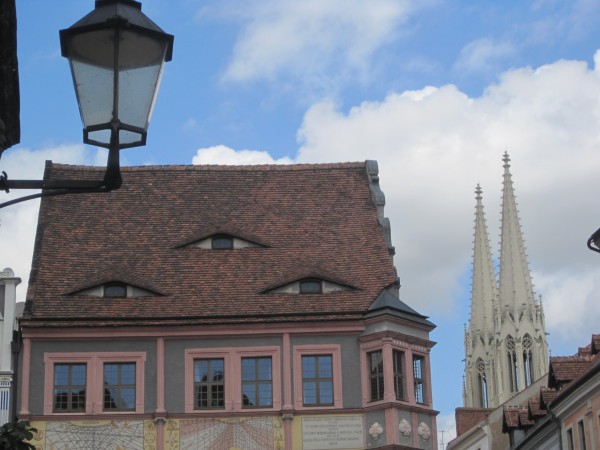 And the eyes in the roof!

In such wonderful shades

But what a strange place to have a bath!

In any event, Görlitz was a delightful place to spend a few hours, and there was more to see, but the main purpose of my visit was to see my uncle.  Włodek’s wife Janina died just a few months ago, and it was the first time he had “entertained” on his own.  He could not do enough for us, and was proud to show off his domestic skills.  These included his homemade sour cherry jam, putting me to shame. 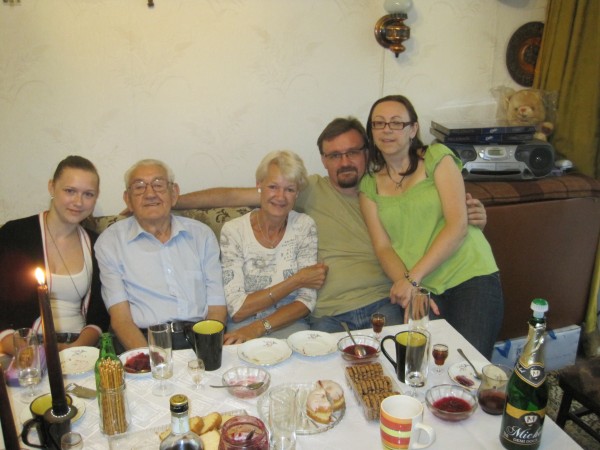 The famous jam, niece Basia, Dad, me, cousin Wojtek and his wife Agnieszka

After all that, Zakopane may seem like an anticlimax, but it definitely wasn’t.  I was there in September 2009 for the occasion of my cousin Adam’s Silver Wedding celebration.  Sadly I don’t have many photos to share.  You’ve guessed it!  I was too busy eating, drinking and dancing my legs off. 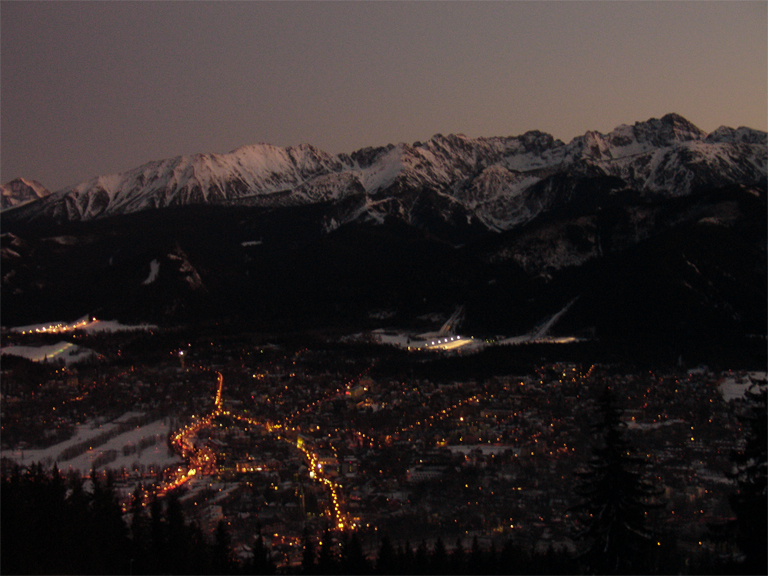 Zakopane at night, from Wikipedia Commons

Zakopane is known primarily as a ski resort but is extensively used as a hiking centre in the Summer too.  Just 20 kms south of Krakow, it sits in an area of national park and outstanding natural beauty.

I was there before the snows had arrived, but was happy to take the funicular railway zooming 1388 metres up Mt. Gubalowka for the panoramic views.  The top of the mountain is one enormous playground.  There are a variety of stalls selling woolly mittens, socks and hats, all in a riot of colours.  Smokey mountain grilled cheese can be washed down with grzane wino, heady local mulled wine.  Sideshows attract the young at heart, who can also whizz down the slope on a metal toboggan ride.  Adventurous types teeter in the trees on an aerial wire.  And all to a background of spectacular beauty.

If you’re interested my guide on http://www.simonseeks.com/travel-guides/zakopane-fun-snow__118121 will give you a more complete picture.  I’ll focus here on family. 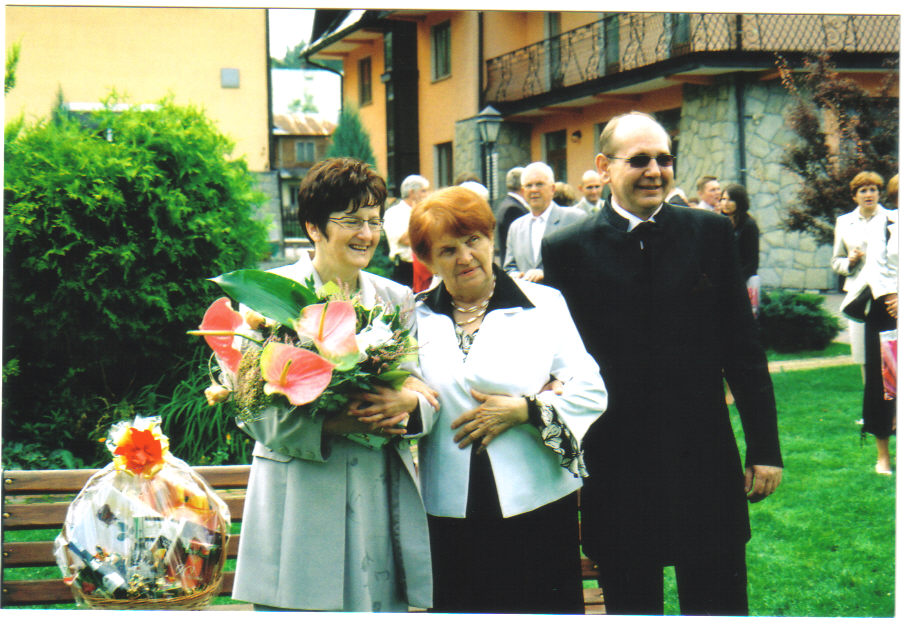 Adam, wife Marta and a neighbour at the Silver Wedding celebration

The church in Poronin where their wedding vows were reconsecrated 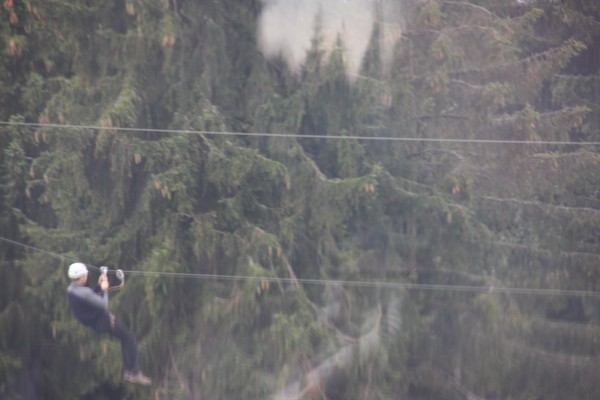 Dangling among the trees (no, not me!)

Michael, me, Adam, and Lynne and George, who came all the way from Canada

So that’s me at the tail end of my personal alphabet of Poland.  Of course, I have a few gaps to fill in, but Julie Dawn Fox, whose idea this A-Z challenge is, doesn’t seem to mind.  And my lovely friend, Frizz, knows much more about Germany than I ever will.  The ZZZ Challenge is up this week so check that out too!  Click on the links or the banner below for more information.

Having just returned from Wrocław with over 300 photos, you could say that I collect photographs!  However it’s wonderful of Jake to unexpectedly present me with the opportunity to display some of them with his theme for this week, Collectibles.

My uncle Włodek lives in the Polish town of Zgorzelec, snuggled so closely to the border with Germany that it has a counterpart across the River Neisse, in Gorlitz.  The two are one, but divided by language and a boundary.  On Saturday morning when we went to explore this curiosity, it transpired that there was a large market in process, and the following caught my eye. 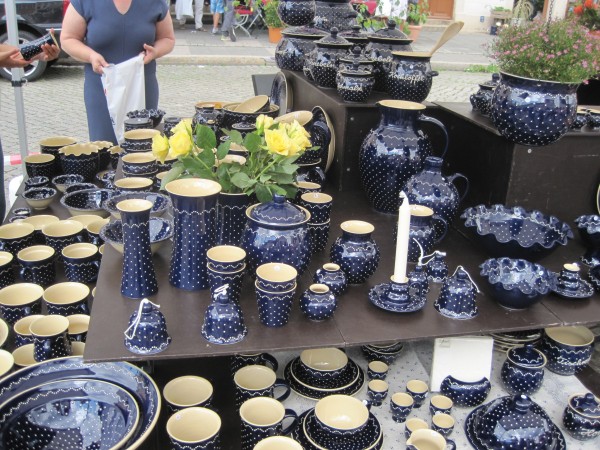 Don’t you love this pottery?

Or maybe this style?

With a tealight? Delicious!

Motyli – butterflies.  I don’t know what they are in German?

Something more for the garden?

Or maybe him? He’s looking pensive.

While the horse looks patiently on.

I have to confess, I love pottery and spent happy minutes just browsing.  When it comes to collecting, though, my real vice is postcards.  I filled a suitcase with them, and when it was overflowing, decided enough was enough.  But I still gaze longingly at postcard stands.

So much “stuff” we collect!  One of my nieces came back to England with me and we were looking in the local museum yesterday.  The teddy bear collection was everybody’s favourite.  Winnie the Pooh and Paddington Bear -what would life be without them?

Many thanks again to Jake for presenting yet another opportunity to share my world.  I’m late this week (for good reason) but maybe you’d like to join in next week?  The details are all on Jakesprinters home page.