It’s always good to start a post with a flamboyant flower, don’t you think?  Though in this case it has only a little relevance.  How many circular walks do you know that start and end by a river, exploring Roman ruins along the way?  I can actually think of one other, in the Algarve, but I was quite unprepared for the scale of these ruins, at Ammaia, in the Alto Alentejo region of Portugal.  Ruins I’d never even heard of!

I have to say that the last walk was a very hard act to follow.  Having seen the valley from the lofty heights of Marvão, I was curious as to how the village would look when viewed from below.  Driving back down didn’t seem half so difficult as the haul up to it had been.  As usual, I wasn’t doing the driving, but gazing out at the scenery.  Sleepy Portagem was a lazy dream of a day in early March.  Come back in July and it might be a different story, with screams and splashes echoing up the valley from the river beach.

Yes, that’s Marvão, right up on the top.  No wonder it’s serene and peaceful!  I read that the village hosts a Medieval Fair in October.  What a sight that must be!  And yet, for once, I’d opted for serenity and loved every moment. 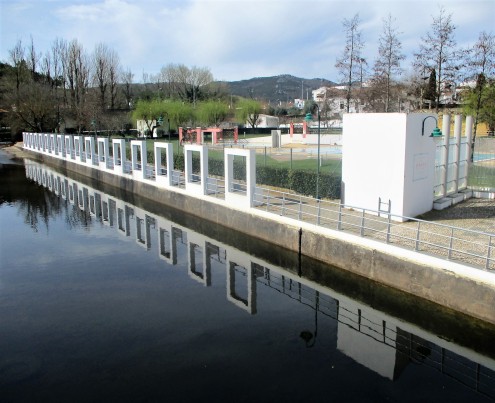 It was, pretty much, also what we found on our descent from Marvão.  A river beach has been constructed on the River Sever and, alongside it, a smart pool complex.  Totally deserted, of course, in March.  Used, as I now am, to an early Spring in the Algarve, I was astonished to find bare trees, just awakening to the gentle warmth of the sun’s rays.

Looking at the sign boards there seemed to be a choice of two walks, PR1 and PR5.  So long as we didn’t have to climb all the way back up to Marvão on foot, it didn’t much matter which.  The river curved away into the distance, beneath a beautiful old bridge. 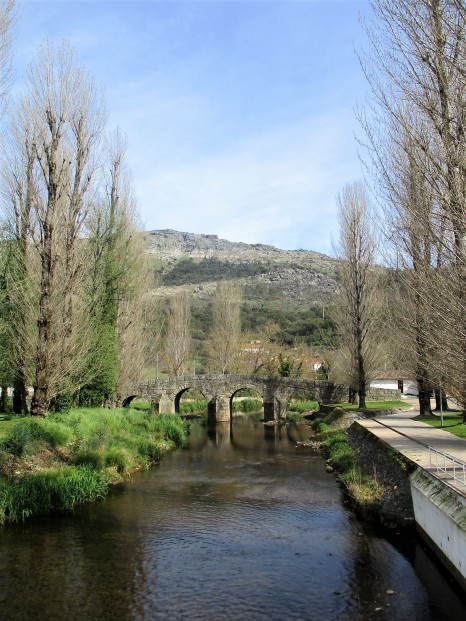 Crossing the bridge, a decision of sorts was made.  Inaccessible castle ruins and a more modern calamity, ripe for renewal, directed our steps. 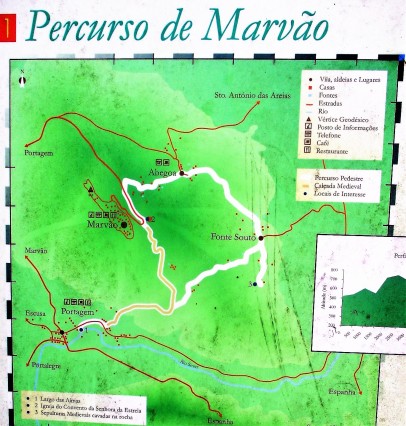 Poppies danced overhead as we followed a grassy trail around the back of the village.  I stopped to admire a haphazard clump of irises, triggering a frenzy of barking from behind the fence.  Buried among bright green foliage, could that be a wild orchid? 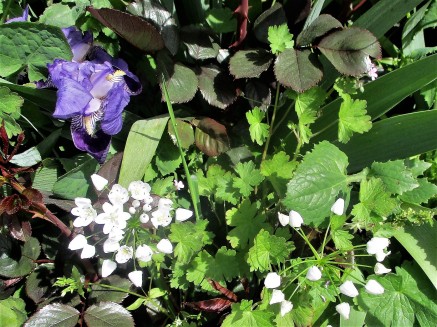 Moths and butterflies fluttered by, intent on the beautiful day, and a patch of tiny, jewel bright violas.  A narrow road led between fields full of olive trees, where a farmer and his wife were clearing and burning tired, old tree branches.  They surveyed us with curiosity, nodding at our greeting.  I doubt if too many strangers pass their way.  Set back against the hillside, we became aware of some ruined structures, and speculated on what their purpose might have been.  The sign Fornos do Cal da Escusa suggested a connection with ovens.  We later found that these had been lime quarries, quite possibly dating back to Roman times and the nearby city of Ammaia. 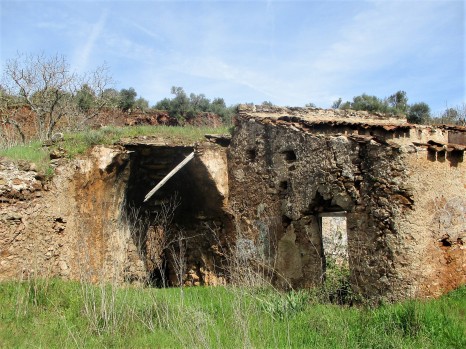 In the distance, across the fields of olives, vines and sheep, Marvão kept watch from on high. 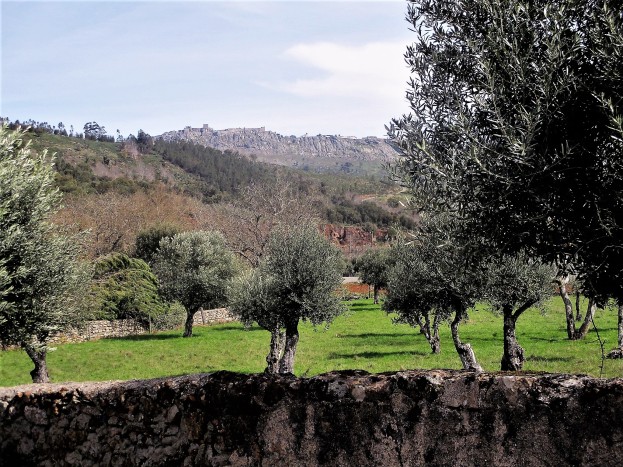 We had circled back towards Portagem but, just before the village, a right turn took us through the tiny hamlet, São Salvador da Aramenha, home to some beautiful camelias.  Past the church and a diminutive café, a left brought us to the Roman ruins, unimposing behind a locked gate. 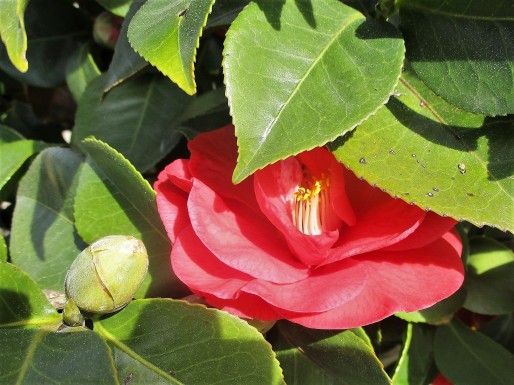 Thankfully they were simply closed for lunch.  Just beyond the gates, a small museum, with a film show relating the history of the site.  Then we were free to wander, full of expectation.  The website Ammaia can provide details. 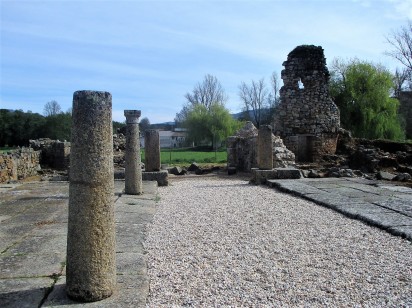 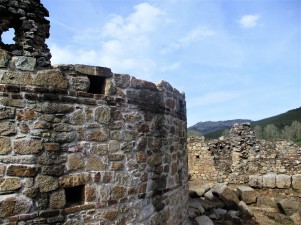 The site is surprisingly large, and actually spans a country lane, but much of it has yet to be excavated.  Remnants of the South Gate, the Forum and a bathing area are clearly visible.  Ongoing since 1994, progress is slow and reliant on students and volunteers. 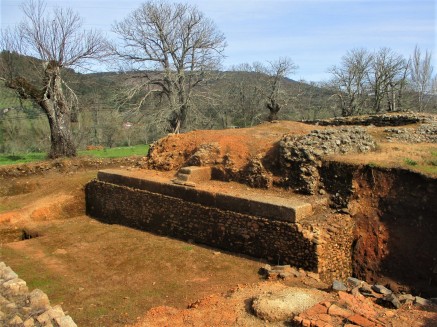 There is enormous potential here, and in the stillness of the surrounds you can let your imagination roam.  Romans, gossiping in the Forum, languid in the baths, or patrolling the walls with Marvão on the horizon.  Meanwhile the grass grows long, sprinkled with wild flowers of lemon and blue.  Leaving the site, it was about another half hour, through the dappled shade of fragrant pines and yet more olives, back to the village of Portagem.  I think we mostly followed PR5.

But where’s the cake, I hear you say?  Well, there’s plenty at Su’s place, and Jude has some luscious meringues to share.  Perhaps you’d like to join them.  In this sleepy corner of the Alentejo, I was hard pressed to find a cake shop.

A few more walks for you this week.  Please, keep sending them.  I don’t mind if they’re just of your back garden- it’s all fresh air, and a pleasant distraction for each other.

Alice has a beautiful walk for us in these troubled times :

But nobody says it better than Drake :

Fancy a little climb with Irene?

Top of a Sand Dune

And playing in the waves.  Wish I could!

Nobody captures beauty better than Lynn.  Treat yourself to a walk with her :

LOCAL WALKS: Signs of Spring in the Pacific Northwest

Still in Italy, Sheetal takes me across the lagoon, to one of my most beautiful memories ever :

Stay safe out there!  We’re all traveling by armchair now.  Might as well get comfy.  I’d better go and find some cake!