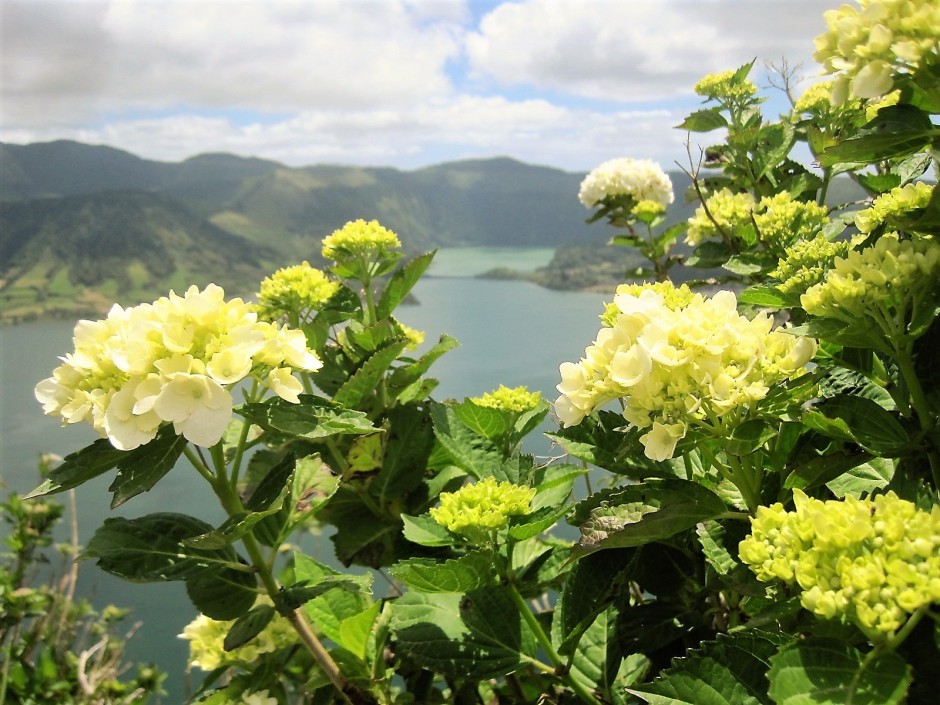 I was going to save this walk till the end of my Azores saga, but it feels right to include it now.  You could say that the entire purpose of coming to these islands was to see the lakes at Sete Cidades with my own eyes.  Could they really be as beautiful as they appeared in the photographs?

They’re back on the main island, Sáo Miguel, a short flight from Faial.  Standing on the runway at Horta airport, looking across the water at Pico, I had to wonder if this second week was going to be an anticlimax.  I needn’t have worried.  Very little about the Azores disappoints.  A smiling taxi driver had whisked us from Ponta Delgada airport to our luxury hotel and thermal spa at Furnas (more about that later) and from there to the north west of the island.  The unfailing good humour and willingness to help of the taxi drivers never ceased to amaze.  En route, Maciel stopped to let us look at Lagoa do Fogo, whetting our appetite for the main event. 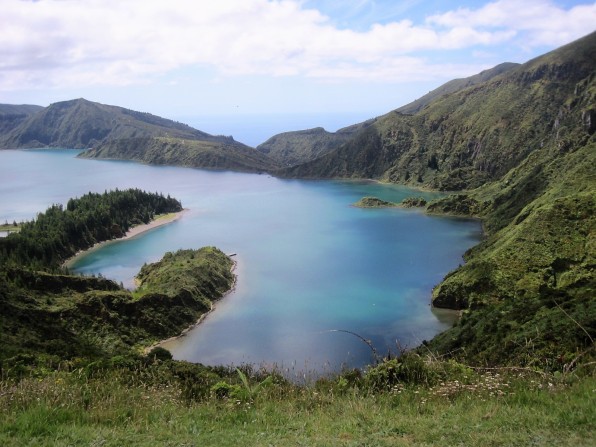 As so often, I got it right, but I got it wrong first!  The area is full of smaller lakes and, thinking to save our legs, the amiable driver paused briefly at Lagoa do Canario on the way up the mountain.  A quick, sunny look, and back in the car.  I had read that the viewing point Vista do Rei (King’s View) was a must see, and asked him to drop us off there.  It was growing increasingly cloudy and I was in dread of a repetition of our visit to the Caldeira on Faial, when we didn’t see a thing.  The clouds wafted around and I waited for that golden moment when the sun hits the water.  Almost in vain!  It was time to start walking, back in the direction we had come from.  Gradually the clouds melted, leaving us to hike a warm 3km along the switchback of a roadside.   The one saving grace was that it afforded us views we otherwise would have missed. 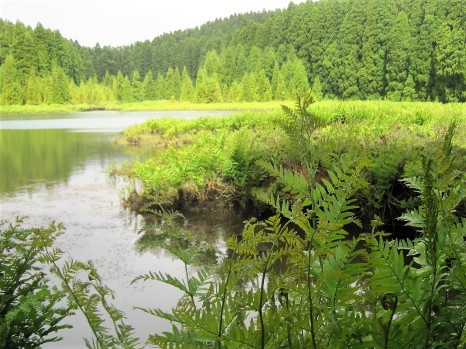 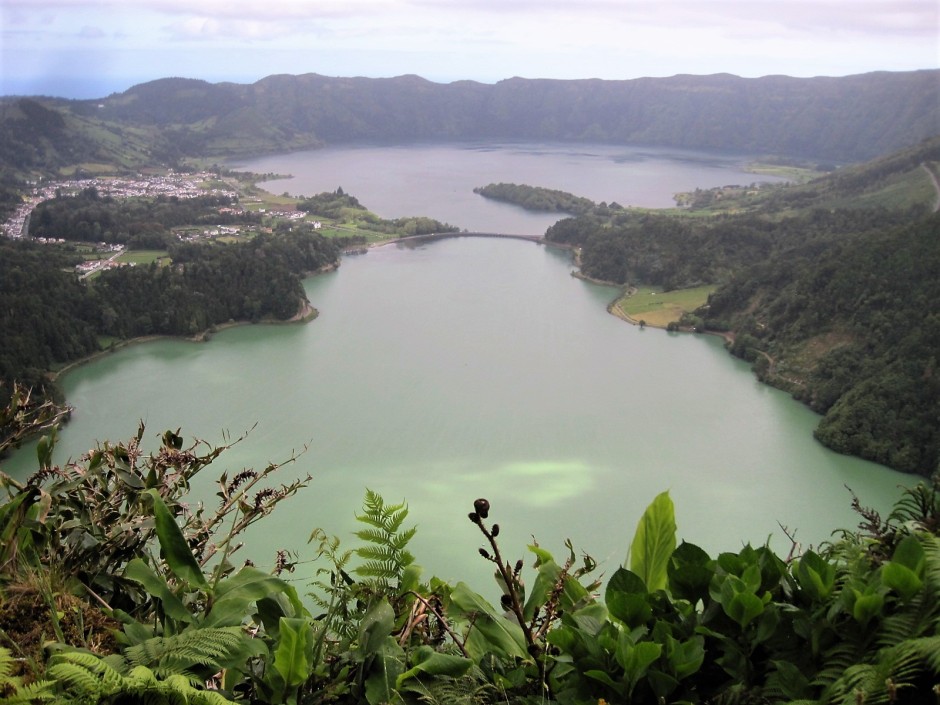 Sete Cidades from Vista do Rei 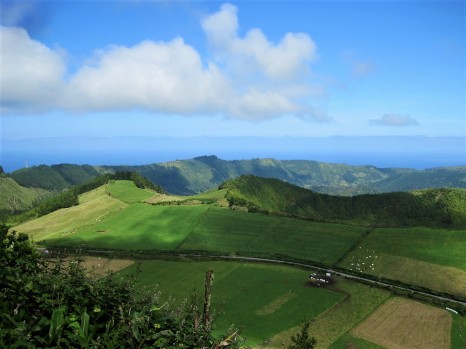 View from the roadside

Can you see the hydrangeas, just beginning to bloom?

Mountain weather is predictably erratic and I had my fingers firmly crossed when we finally reached the beginning of the trail, PR4.  It makes an 11km circuit of the two main lakes, Lagoa Azul and Lagoa Verde, after a bit of a steep climb.  Understatement!

I hadn’t known that there was rather a delightful surprise waiting for us.  A wonderful old, moss-covered aqueduct, Muro das Nove Janelas. 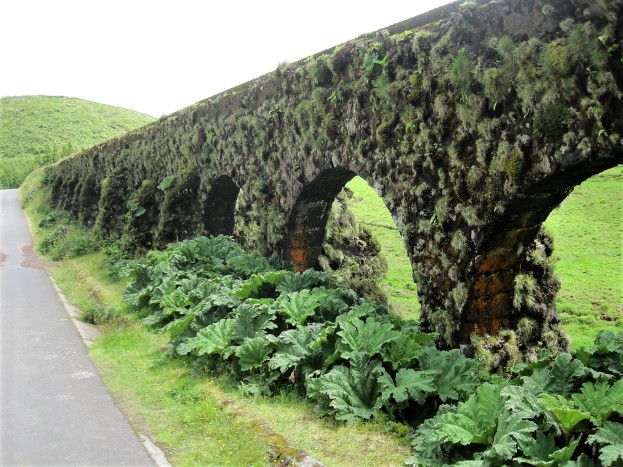 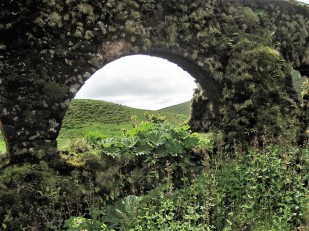 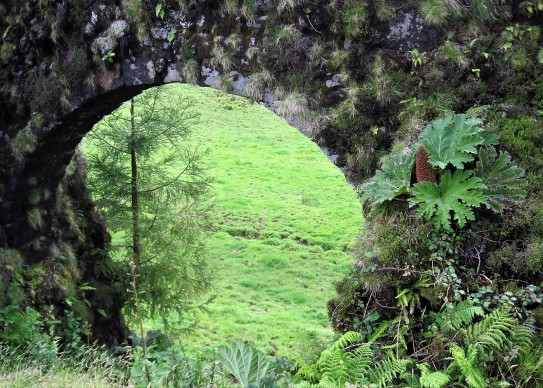 I gawped at it from every angle, before beginning the upward slog, gentle at first but soon arriving at a semi-vertical, narrow paved section, which led up, and up!  A couple of farmers climbed effortlessly ahead of us, turning off the path part way to herd the cattle to different pastures. 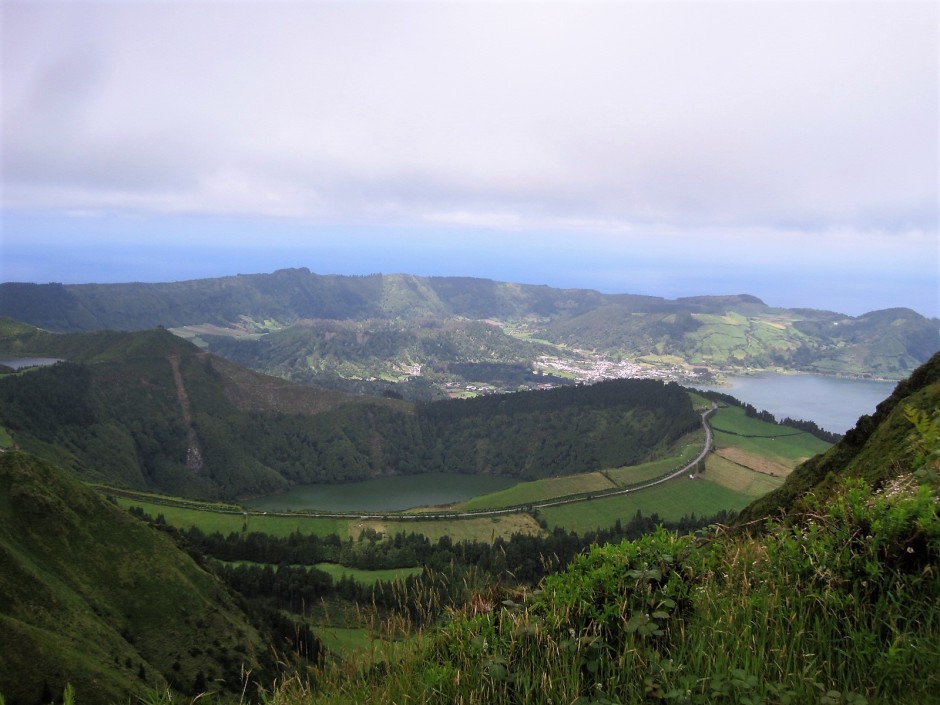 What a reward for effort!  As we climbed higher more of the lakes became visible, despite the lurking clouds.  At the top we heaved a sigh of satisfaction.  There before us spread four of the lakes, including Lagoa do Canario, our starting point.

Now all we needed to do was follow the rim of the volcano.  The trail upped and downed a little, and at one point we simply sat on a rock and gazed.  I can’t be sure but there may even have been a chocolate biscuit involved.  The view was too stunning to care. 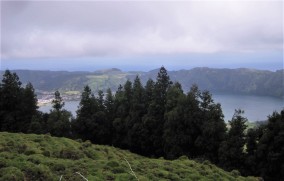 Looking back the cloud still lingered but, as we made our way around the rim, more and more of Lagoa Azul and Lagoa Verde were revealed.  The light danced across the water, tracing patterns and changing colours on a whim.  On the horizon, the wild Atlantic, becalmed. 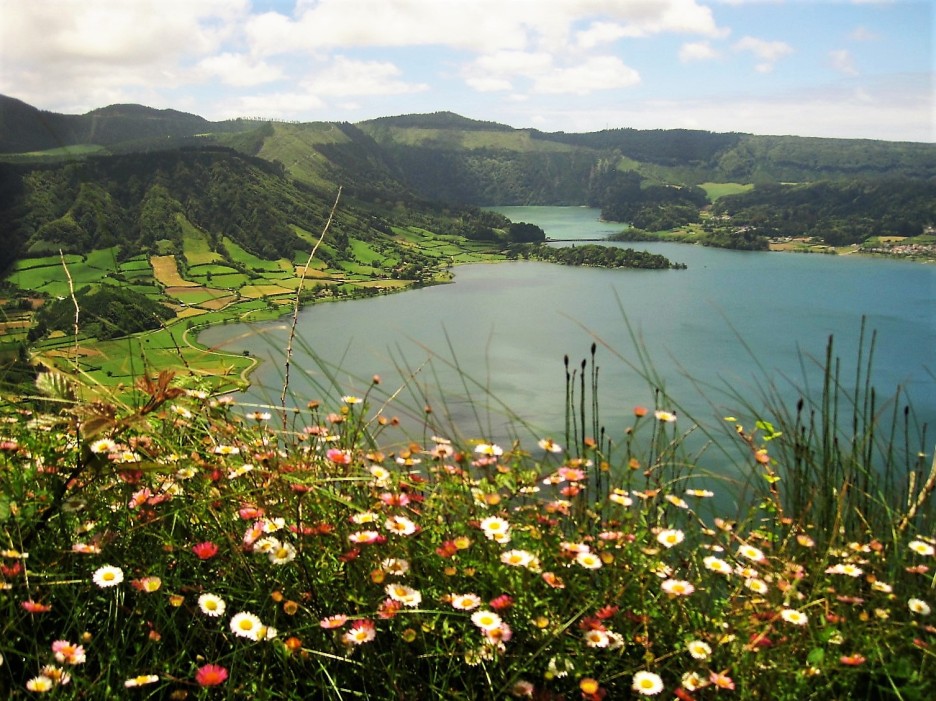 Wild flowers created beautiful borders for me, until finally I found what I had been hoping for- a wonderful spread of hydrangeas. 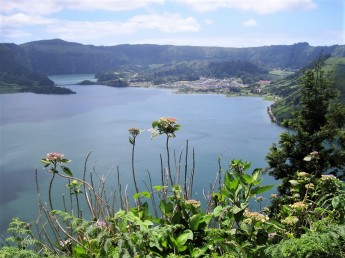 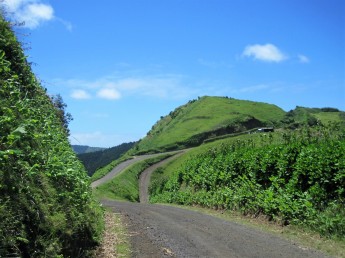 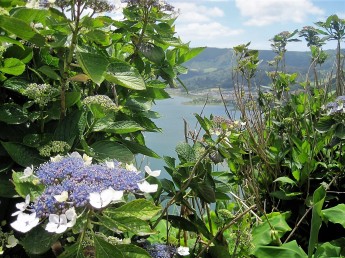 Gradually we came back down.  I had run out of superlatives and my feet were weary.  It seemed to take an inordinate time to reach the lakeside- we’d been walking about 4 hours- and as we did the cloud rolled back in. 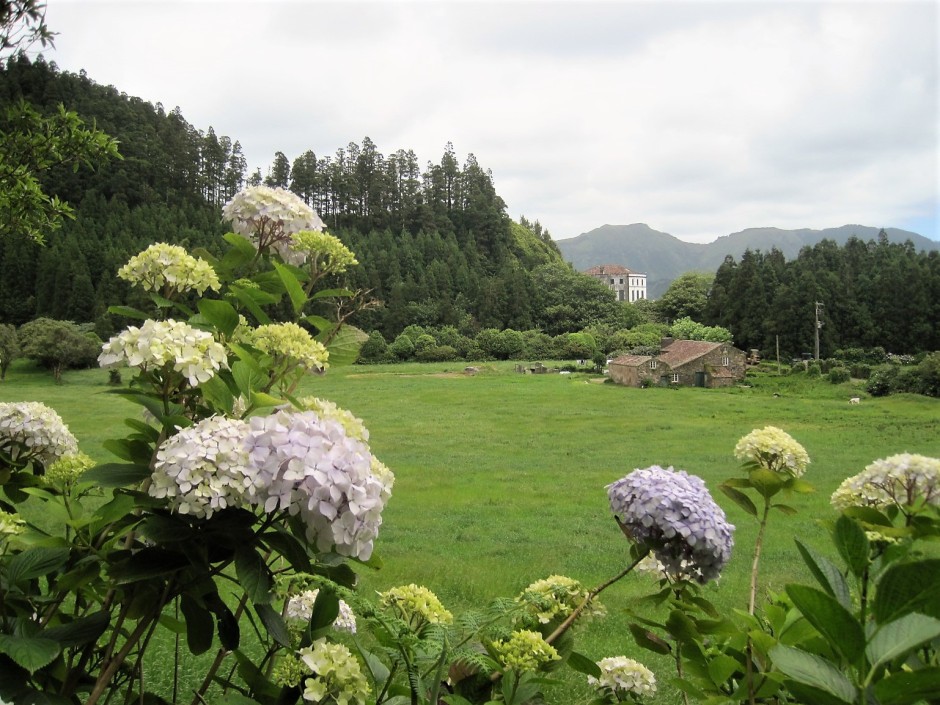 How did the area come to be called Sete Cidades or Seven Cities?  It’s a historical reference, explained fully in the link, with explanations of the volcanic activity which gave rise to the lakes.  For us the big question was how to get to our next destination.  The only taxi in the village was busy, but the lady in the TI assured us he would come in half an hour.  He was late, but smiling, and singing to himself as he drove us back down the mountain, into the sunshine.

The year is flying by, and one of the reasons I’ve chosen this walk is that it’s likely to be my last for a few weeks.  Next Monday I will be in England with a lively 6 year old to entertain.  Great fun but not conducive to lengthy posts.  I’d like to finish my Azores series this week, but there still seems so much to show you.  I’ll be away for 3 weeks so Jo’s Monday walk will be temporarily suspended.  Please do enjoy the following :

All this lies on Lynn’s doorstep.  And orchids too!  What a privilege :

Carol has been walking with difficulty lately, but she can still contribute a wonderful browse around a market :

Drake honours the departed, 75 years on :

The island of Maui, seen through Irene’s eyes :

While Alice has found us the prettiest little lighthouse :

Anne tells an interesting tale of quarries and disaster :

Coombe Down and the story of Bath Stone

While Candy is exploring the green spaces of Deptford :

And from one Margaret to another…  🙂

Golden light streaming from this one of Cathy’s :

I don’t know that this totally fits the bill, but I think Ann-Christine would agree that these are Dreamy landscapes.  Certainly I dreamed of seeing them for a long time.  And Cathy has an ongoing Photography Invitation you might like to join?  Have a great week!