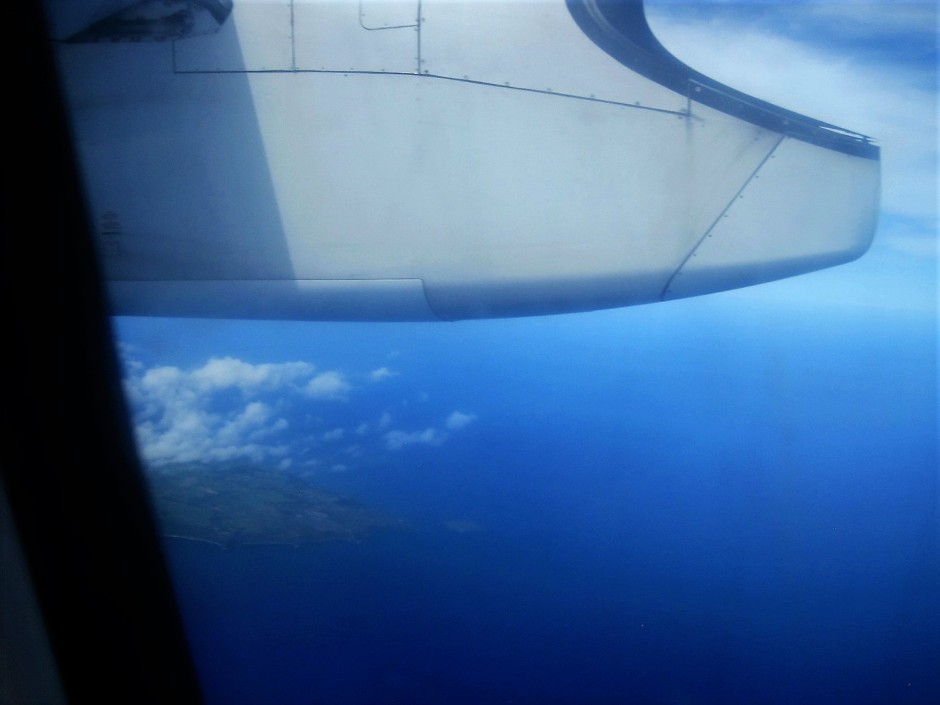 I was captivated by Sáo Jorge from the moment it appeared in the dusky blue, beneath the propellers of my SATA inter-island flight.  Having soared into thick cloud over Ponta Delgada in the afternoon, I was abuzz for the next stage of our adventure.  As the tiny plane dipped towards Sáo Jorge, it was bathed in glorious sunlight.  Beaming from ear to ear, I stepped from the plane and gazed in awe at Pico, with a delicate collar of clouds, right there on the horizon.  Gathering myself, I whisked through the tiny terminal and out into warm sunshine.  The bubble burst momentarily, when I found that the pre-ordered taxi to our hotel was nowhere in sight.  Panic swept in as I fumbled through my papers, seeking address/phone number, but they’re kind folk, these islanders.  In no time, a replacement had been found, and we were climbing the hillside around the bay to Velas. 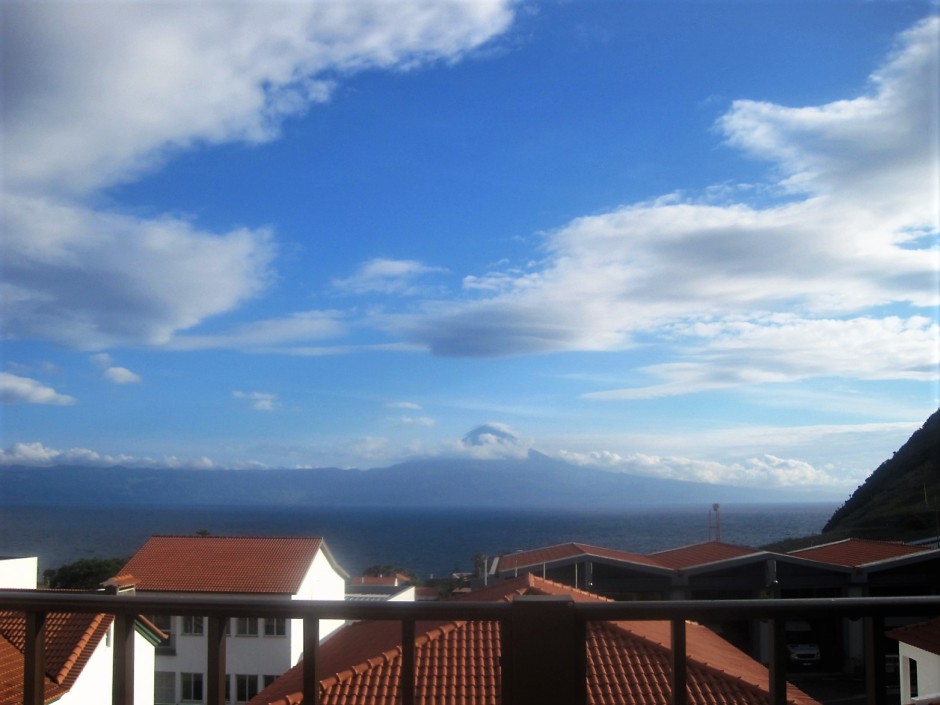 This was the view from our hotel veranda, with the island of Pico floating dreamily on the horizon.  A lovelier, more peaceful spot than Velas I have yet to find.  I’ve already taken you to the top of the island, and you’ve had a glimpse or two of Velas.  Today we’re on a different mission.  Who could wake up to that view and not want to get out there and explore?

A lovely lass in the Tourist Information office had given us a bus timetable, and we were hopeful that we could make it to the village of Rosais, and walk from there to the lighthouse at the western end of the island.  A minibus not unlike a transit van pulled up, and the lady driver smiled benignly at us as we tumbled hastily in.  It was only a 15 minute ride, and I gazed excitedly at the passing landscape. 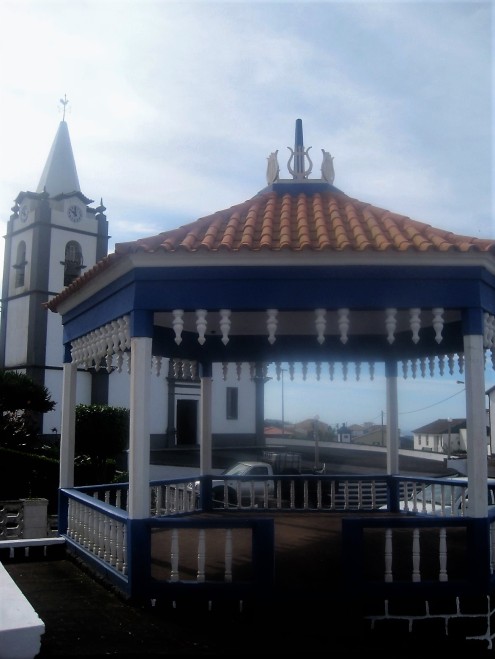 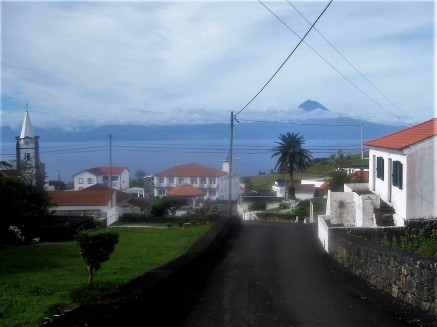 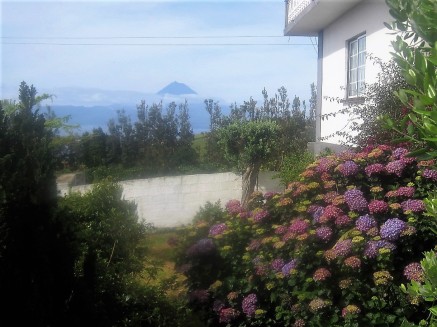 Rosais was a pretty enough village, and after just one false start we were headed in the right direction.  Uphill, of course!  After our efforts of the previous day, at Topo da Serra, the legs were already seriously tired.  A gentle 7km had seemed doable but, as we mounted progressively higher, the balmy weather deteriorated and we were quite cool.  Some folk don’t learn, do they?  But we were jollied along by chaffinches in the hedgerows, and a robin keeping a watchful eye on us.  Looking back down to the bay, Pico still loomed enchantingly, but a creamy horse seemed singularly unimpressed by our efforts.  Fortunately, there was an abundance of azaleas, and even a few hydrangeas as incentive. 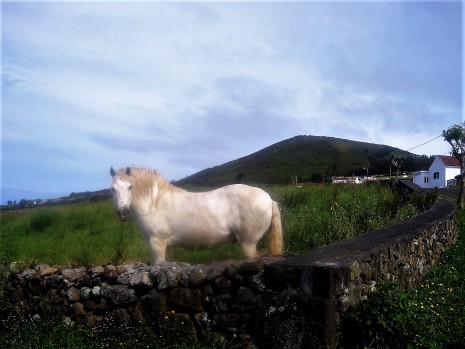 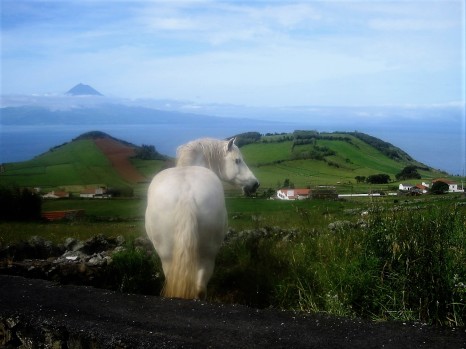 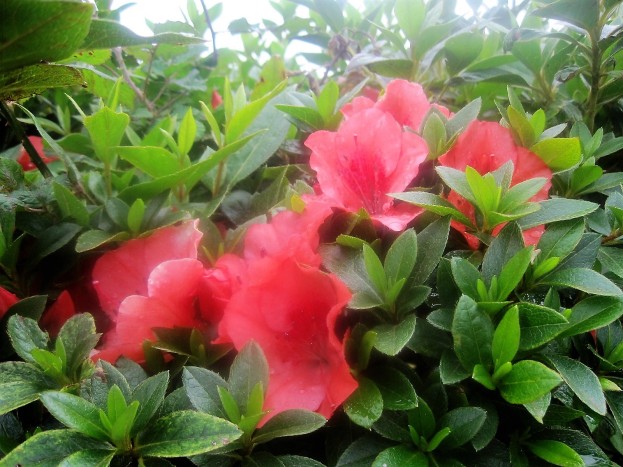 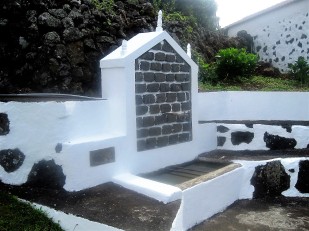 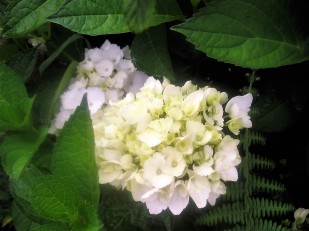 Reaching an attractive picnic area known as Sete Fontes, and feeling shivery, nourishment was needed.  Yesterday’s leftover orange cookies were stowed in the backpack.  But a myriad of tiny ants had got to them first!  Disconsolate does not describe it!  Our pleasure in the day was rapidly diminishing.  Nothing for it but to press on.  The lighthouse at Ponta dos Rosais was signposted, 6km along a red dirt track. 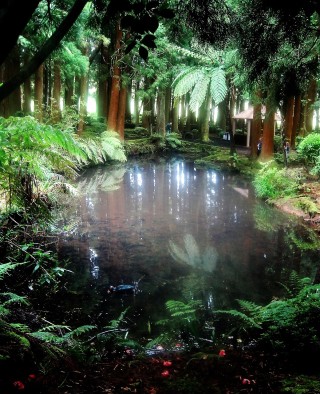 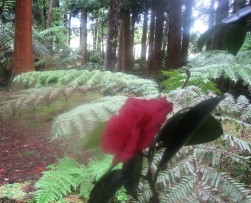 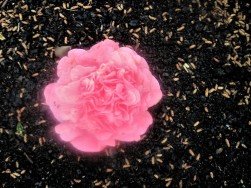 I have never known such an endless 6km.  The track rolled on and on, in an sequence of ridges.  No sooner had you reached one, than you were plunging downwards again.  We looked for distraction in the surrounding fields, trying not to notice a huge rain cloud gaining on us.  A solitary gentleman, returning from the point, assured us it was not much further, and that it was a stiff climb but we really shouldn’t miss the viewing point. 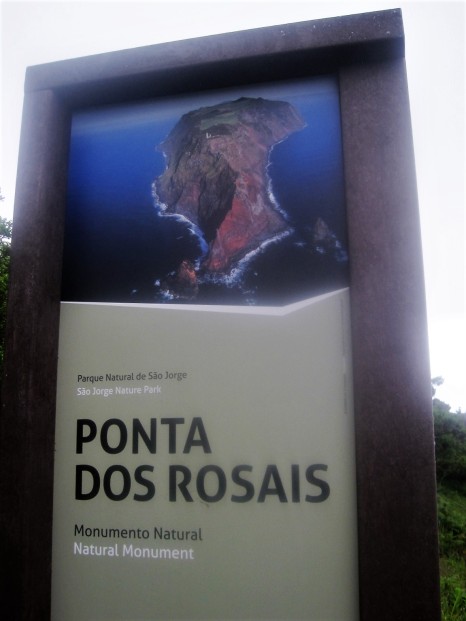 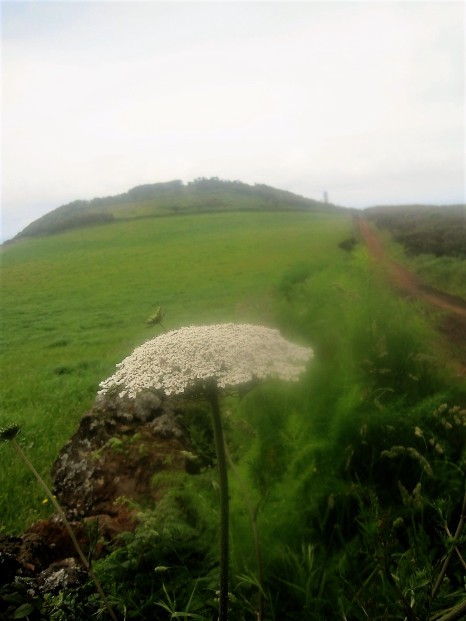 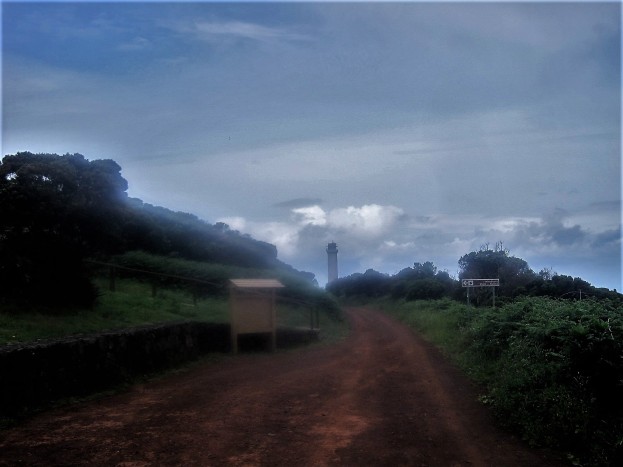 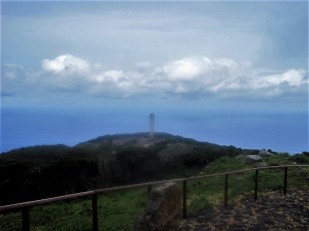 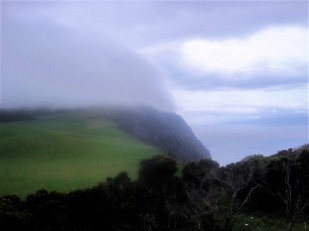 The stiff climb was almost vertical and we hauled each other up, grimacing.  Part way up we had one of those coincidence, chance encounters that sometimes happen on holidays.  A young German couple we’d seen briefly on the Topo da Serra walk had also decided an easier day was a good idea.  We stood and chatted, discussing the islands and our itineraries, then parted company.  It was too cloudy for the views at the top to be brilliant so I soon started back down, thinking Mick had gone ahead of me.  But I couldn’t see him anywhere on the path.  Deciding he must have gone to the lighthouse, I turned in that direction.  Wearily, I might add. 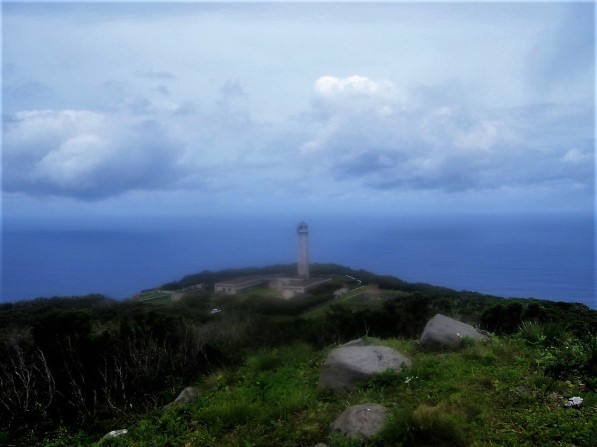 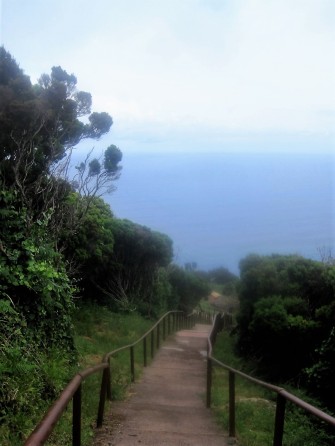 There was just one small white car parked there, and it turned out to be our young couple, heading for home.  ‘Can we give you a lift?’ was music to my ears.  I really didn’t fancy the trudge back.  ‘Oh, yes, please!  But I can’t find my husband.  Have you seen him?’  ‘No, but we can hang on 5 minutes?’  I scuttled back to the viewing point and who should be strolling nonchalantly down the steps?  ‘Hurry up!  We’ve got a lift!’  🙂  He had, apparently, been reading a signboard that I hadn’t even noticed, all about the whaling industry.  We were so relieved to pile into that car!  And the ride gave us time to exchange a little history.  They were going to Faial next, like us, but then to Flores Island.  I was envious!  It’s the furthest away, and allegedly the loveliest.

The sun was shining brightly as they dropped us off in Rosais.  The plan had been to catch the 2.30 bus back, but after a glass of wine we’d revived enough to consider the options.  The coast line looked superb and there was a quiet road that followed it.  Maybe, a gentle stroll…?  There was no hurry.  And the reward, a sequence of glorious views. 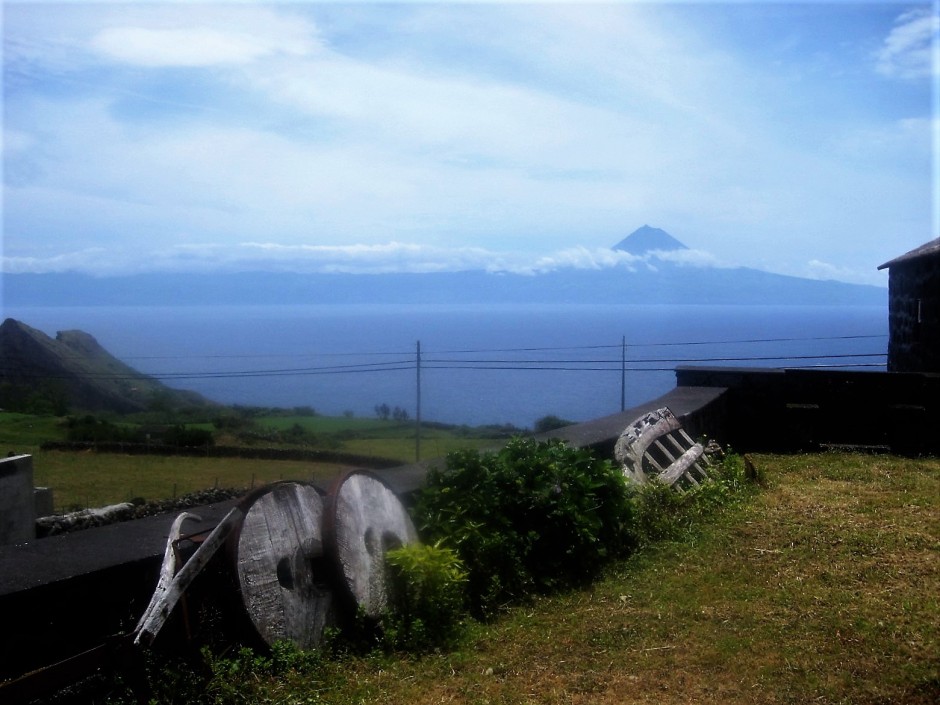 I love the humps and bumps of this island, and the cows, who stare at you quite incredulously from every second field.  A person could acquire a complex.  Three horses galloped across to see what we might have to offer, but turned their noses up at our ant-ridden biscuits.  Hopefully the birds won’t have been so choosy.  The legs were starting to feel leaden as we reached the miradouro on the edge of Velas.  Overall we must have walked about 15km.  I hope you won’t begrudge us cake? 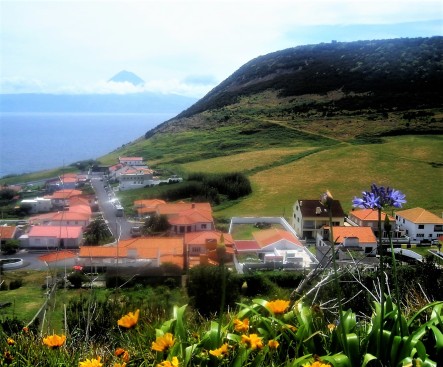 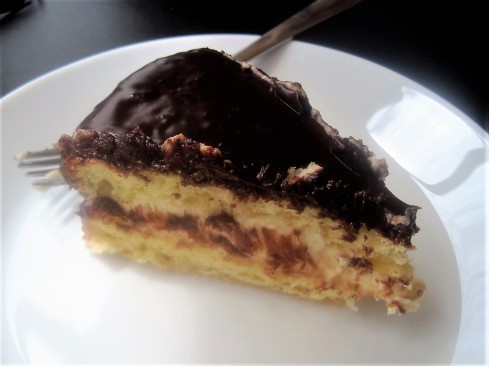 Cafe Livramento was right next door to our hotel.  How convenient was that?  And beautiful food too.  I hope you’re not bored with my ramblings in the Azores?  I promise not to spin it out too long, but this is only our second island.

Meanwhile, it’s on with the sharing.  Thanks to everybody who stops by, and especially to those who leave a walk in the comments.  Be happy to see you next week, here on Jo’s Monday walk.

It seems such a long time since I was in Barcelona.  It’s full of striking buildings, like this one, from Debbie :

Short circuit with a view

Albert continues his walk this week, beside the Molongo River :

Sea pinks, Campion, and fields of waving poppies.  We must be in Jude territory :

I always appreciate sky and sea, in any colours, so thanks, Susanne :

Blue and White at Coulon Park

Drake seldom disappoints with the things he shares.  Step back in time with this one :

Outing in the backdrop

And, in case you’re in the grip of the current heatwave, saunter over to Sandra’s place for a cool off!

While Cathy plays with donkeys on this stretch of the Camino :

There are lots of lovely Blues in this post, but I realise I’ve been most remiss in not squaring one.  After all, it’s July 1st, and Becky is full steam ahead again!  Never mind- I’m sure I’ll round a few up, and that many of you will too.  Have a great week!