A visit from the Tall Ships is always a special occasion, but when it coincides with a significant birthday there is an opportunity to make it very special indeed.  When Thursday dawned cool and grey, I thought I might’ve made a mistake with my husband’s birthday surprise.  But, the tickets were bought, and I’d even purchased train tickets to Sunderland.  He could drink without driving, and not worry over parking.  The pattern of the week had been overcast skies till about 3pm, when magically the clouds rolled back.  Here’s hoping!

To host the start of a Tall Ships Race is a great coup, and Sunderland has made the most of the opportunity.  Leaving the station it’s only about 10 minutes walk to the riverside, and from there you have a choice whether or not to cross over the River Wear.  The ships were berthed on both sides of the river and are nothing short of majestic.  As ticket holders we stayed on the near shore and followed the trickle of people heading down to the quay.  The East End of Sunderland is still undergoing changes to bring this historic area into the 21st century.

The way it was

The Tall Ships will race over a thousand nautical miles in 3 weeks.  The first leg races from Sunderland to Esbjerg in Denmark, then to Stavanger in Norway, and finally to Harlingen in the Netherlands.  You can see the full line up of over 50 ships on the Tall Ships website.

Despite grey skies they were an awesome sight as we made our way along the quayside.  Various entertainments were on offer, and we paused for a few minutes to observe Martin Lewis of the ‘Money Show’, taking questions from the audience.  On the far shore, next to the National Glass Centre, a full scale fairground was in progress, and some of the ships had entertainment on board. 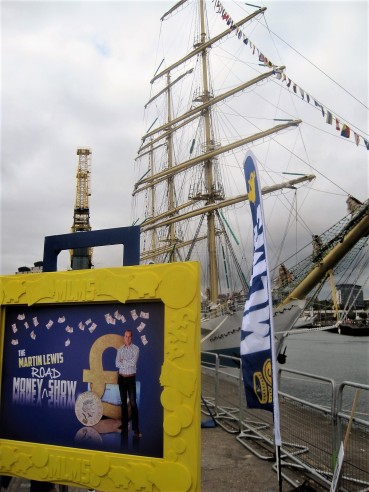 No time to linger at this stage.  We had a destination.  Unbeknownst to my husband I had booked a 2 hour sail on a Tall Ship.  Until we checked in I did not know which.  Enjoying a drink at the bar, we waited for our number to be called.  Half an hour later we were boarding the beautiful  Wylde Swan from the Netherlands.  The largest two-mast topsail schooner in the world, she was built for speed.  The story of our voyage was the subject of this week’s Six Word Saturday so I’ll simply say that it was magnificent.  The crew demonstrated their proficiency, hauling on ropes and tying sails, yet still finding time to engage with their passengers.  The camaraderie as they worked together was a joy to see.  As we returned to port the sun, which had been hovering behind the clouds, finally broke free and we were bathed in golden sunlight. 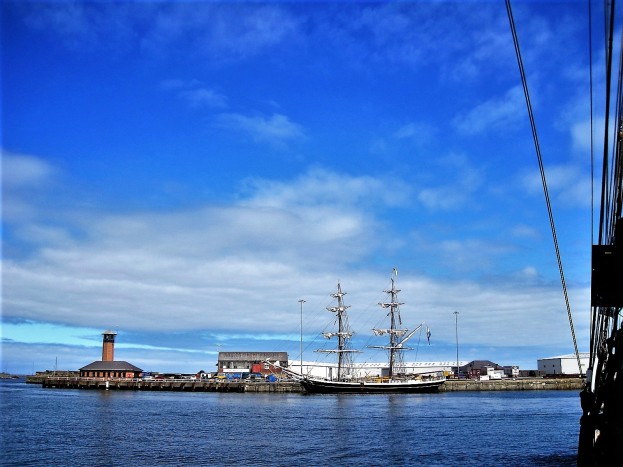 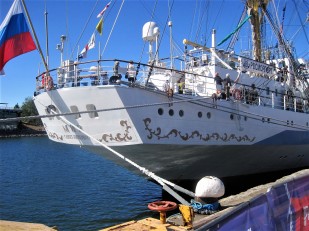 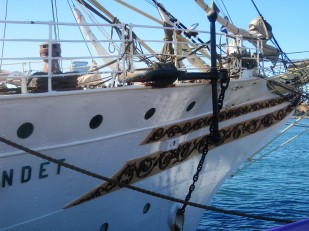 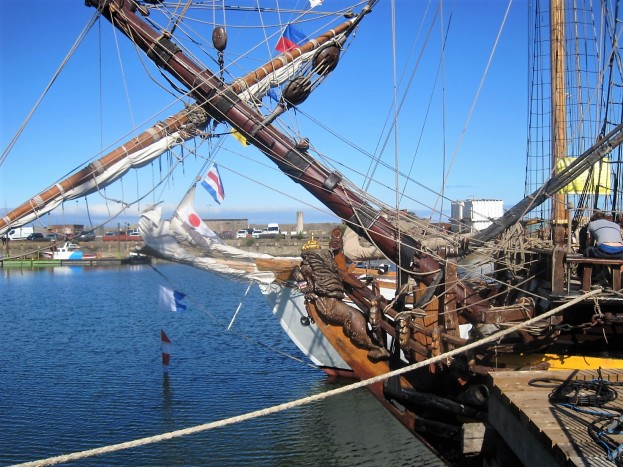 It was a long walk down the quayside and I had spotted a pub with a bird’s eye view of the festivities.  Naturally this involved a number of steps, but the sun terrace of the Boar’s Head was worth it.  Built in 1724, beside Youlls Passage where press gangs were reputed to work, the pub was later frequented by Laurel and Hardy.  Peggy Potts, a local brandy smuggler, lived just 50 metres away, and her family are said still to be patrons. We basked in warm sunshine and friendly chatter with the locals. 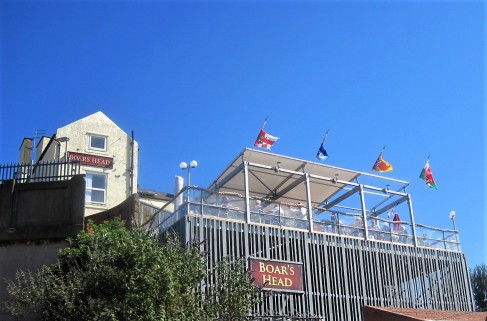 Looking across to the National Glass Centre

More strolling was required after our lunch, and there was plenty still to see.  Entertainers were either resting or setting up for a performance, and many of the crews were at ease.  Further along the quay the ships grow smaller, the industry of the port an interesting backdrop. 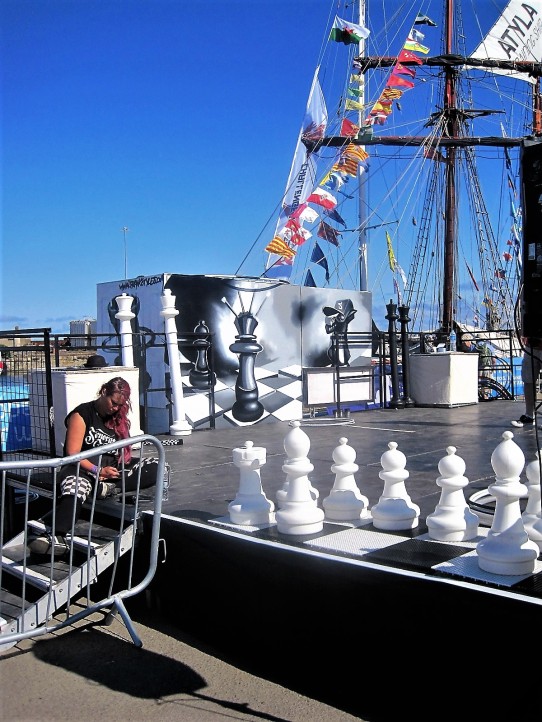 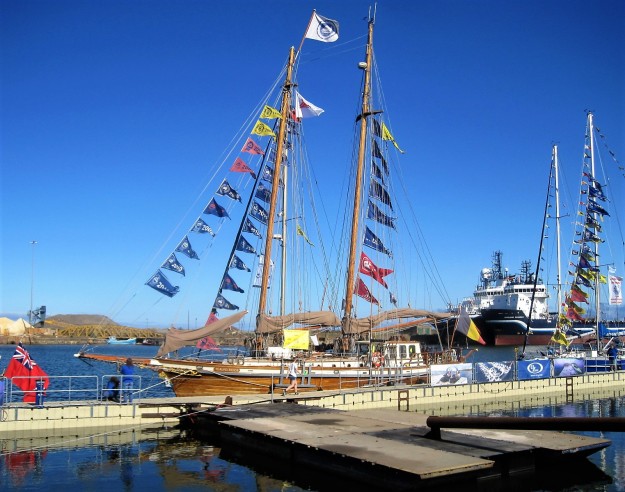 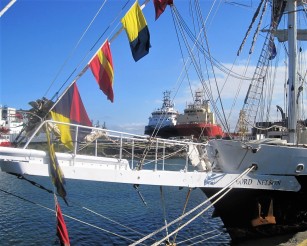 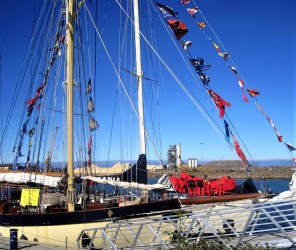 Our feet were tiring by this stage and there was still the walk back to the station.  A convenient icecream van was just what we needed.  The event was rounded off with fireworks each evening, and on Saturday a Parade of Sail, as the ships left harbour to begin the race.  If they didn’t manage to find a Cooling breeze or two, I don’t know who would! (do join Leya for this week’s brilliant Lens-Artists Photo Challenge).  And how could I forget Cathy?  I love what she’s doing over at Wander.essence!

The walks I share are all so very different in style and content.  Please find time to visit as many as you can, especially if it’s a blogger you don’t know.  Many thanks to all of you for sharing and for your wonderful company.  Kettle on?  We’re good to go, here at Jo’s Monday walk!

Self-realisation is a wonderful thing, especially if you can share it with Elaine :

When I said to Drake that I always wanted to visit Annecy, he came up with the goods!

South Carolina!  There’s another dream for you!  Salt marsh, I’m familiar with from the Algarve :

A walk on the wildlife side

I can’t resist Meg, and her close scrutiny :

I’m not a great cook, but Lady Lee could tempt me with her chicken and cashews :

But if all else fails, Jackie has a good idea :

Who doesn’t sing along when the Bee Gees are on?  And maybe strut your stuff?  With Carol, of course!

Or you could try a bit of gold digging?

Meet Melanie and say hello to Captain Cook, while we’re Down Under :

Melbourne- It’s a Walk in the Park

This sounds a bit like a radio programme, but take a turn with Anabel.  You’ll love it!

I don’t know anyone who writes better garden posts.  Another beauty from Jude!

Seeing the title I thought Amanda might have a ship or two.  Far from it, but this is a wonderfully lyrical post :

Walking Around in Whitby

And finally, Cathy surprises me with a lovely swathe of bluebells :

That’s it for another sweltering week.  Hope it’s fine where you are, but if you need a drop of rain then I hope it lands.  Take care till next time!