Rufford Abbey in Nottinghamshire looks very inviting on a warm Summer’s day.  Nestled on the edge of Sherwood Forest, in Robin Hood territory, the abbey dates back to 12th July, 1147. Founded by Gilbert de Gant, it was populated with Cistercian monks from Rievaulx Abbey in Yorkshire, a place that I know well.  They were known as ‘white monks’ because their habits were made from undyed wool, and they lived an austere life of prayer and hard work.

When my daughter suggested that I would love these abbey ruins, now part of a large country estate, I was more than happy to accompany her. She always makes excellent company.  Why don’t you come with us? 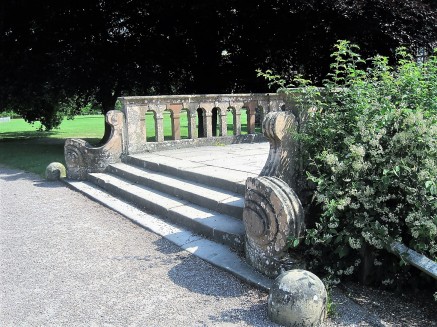 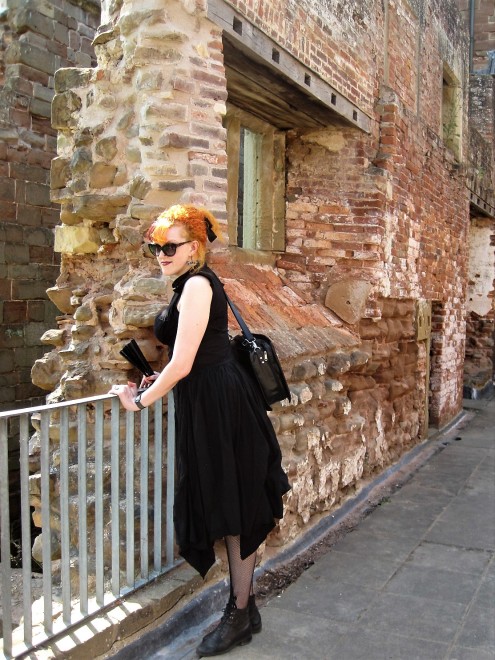 Did any of you ever hear of a heliochronometer?  That’s what Lisa was studying in the rose garden.  According to a complicated explanation in Wikipedia, it is a precision sundial first devised by Philip Hahn around 1763.  We struggled to set it, rather unsuccesfully. 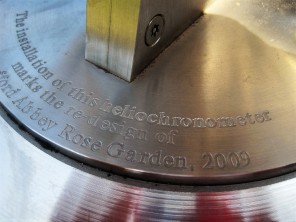 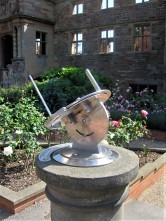 Only the west wing of the abbey remains.  The rest was demolished in the 1670s, following the Abolition of the Monasteries.  The pink-tinged stone has a delicacy I love.  A country house replaced the abbey, alleged to be haunted, most appropriately by a skull-bearing monk. 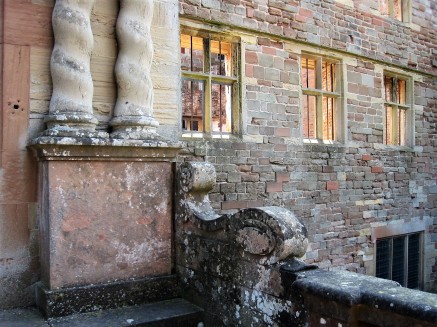 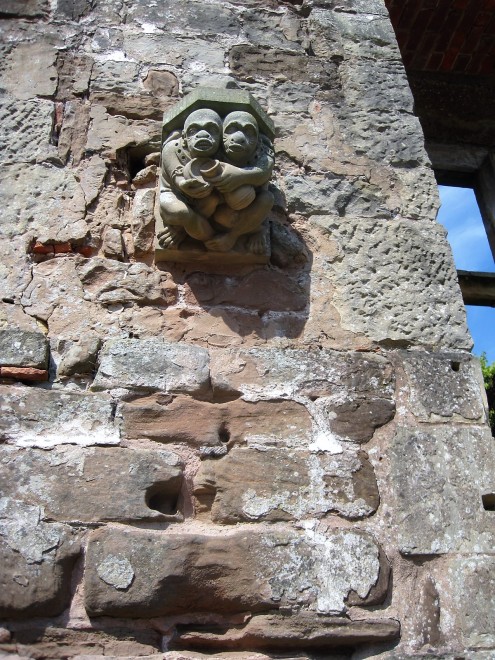 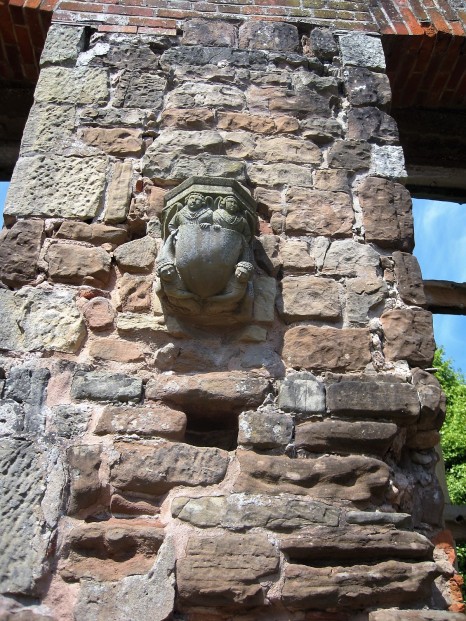 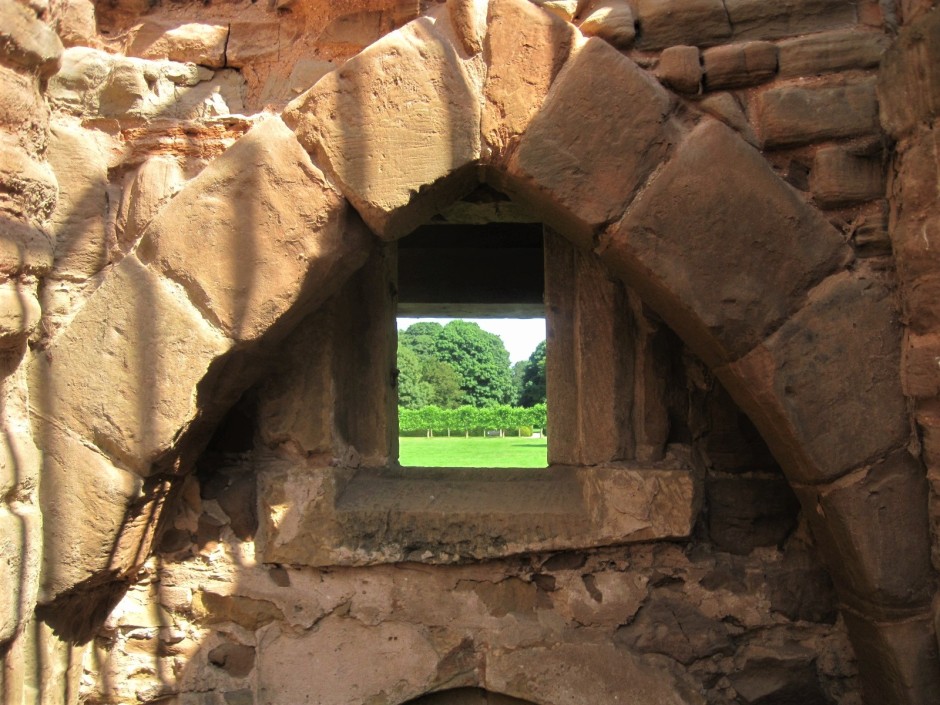 The formal gardens have a lovely hint of playfulness, entrancing to children large and small. Had it not been so hot we could have navigated the fortune maze for much longer.  Spinning the wheel to choose our destiny.  The metal gates and sculptures were intricate and beautiful. 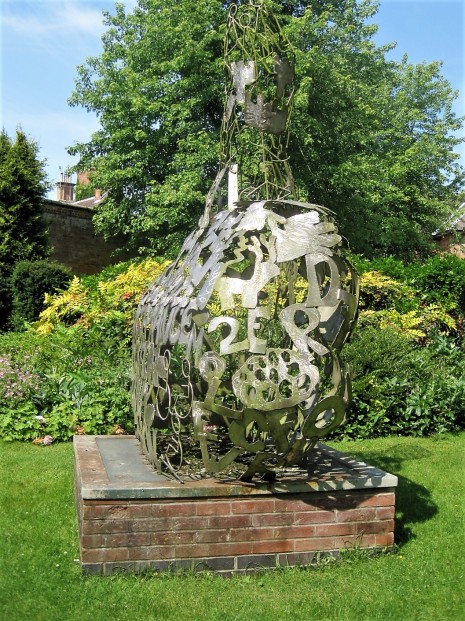 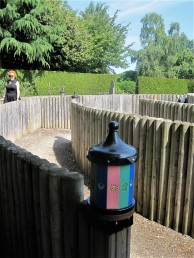 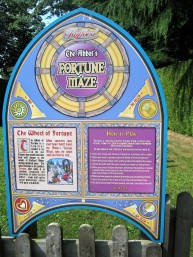 Shade was a valuable commodity, with Lisa fluttering her fan and wishing she’d brought the delightfully dilapidated parasol I’d managed to poke another hole in the previous day. Accidentally, of course. 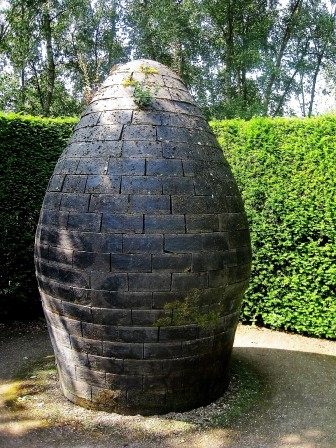 The Oil Patch Warrior, a sculpture by Jay O’Meilia, a Navy artist in World War II, commemorates American oil workers who drilled over 3 million barrels of oil in the heart of Nottinghamshire, between 1943 and 1945.  He is one of many varied and interesting pieces throughout the grounds. 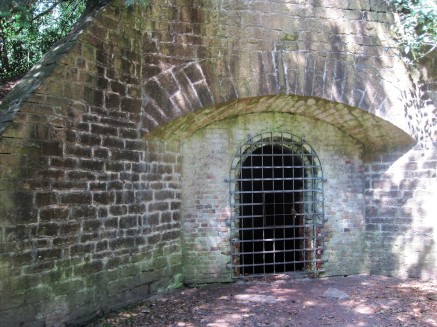 Hidden in the depths of leafy shade we find an immense ice house.  Sadly, the ice is long departed.  Hoping to catch a breeze over by the lake, or maybe even an icecream, we saunter down through the trees.

There’s a small cafe, but it’s melting hot inside, so we opt for that icecream- tangy lemon for Lisa, pistachio and almond for me.  Lovely!  The path winds on around the lake and we follow it back to the start.

Time to twirl that imaginary parasol homewards.  All good things come to an end, and it was beautiful while it lasted.  I hope you enjoyed it too.  Rufford Abbey is now managed by English Heritage, and full details of how to get there are on their website.

That’s my couple of days in Nottingham accounted for.  Thank you for your company, and for the many and varied walks I’ve received this week.  Join me any time.  You’ll be most welcome. Details are on my Jo’s Monday walk page.  Time to put the kettle on now and settle in for a good read.

I was delighted to be introduced last week to Theresa, by Becky.  Another birder, of course!

For a glimpse of breathtaking beauty, you often can’t beat Drake :

One I missed from last week!  Please have a catch up with Denzil :

The Valley of the Hermeton

A beer by the Spree and/or a bit of wall?  Nice choice from Debbie :

A look at a place Jackie knows well- street art and stairs! :

A bit of sadness with Woolly :

Cake not Hate – a walk and some thoughts

While Jude is mildly disenchanted with walking in Truro.  Can anyone help?

Truro – the UK’s most southerly city

Lady Lee offers a superb look at another of those places I’ve always wanted to visit :

A good friend has been to the falls at Plitvice and Krka.  They look magnificent!  Here’s proof positive from Paula :

Do you know Ting?  She’d love to escort you around these beautiful gardens :

Exploring the many canals of Aveiro

While Carol takes me somewhere very familiar indeed.  I do like a Shambles!

A Walk Around York

You might need a bit of stamina for this long walk, with Eunice :

I am enamoured with Savannah.  Take a look at Cady Luck’s post and you will be too!

Sssh, but the sun still seems to be shining a little bit up here, and I’m off out for a walk.  Catch you all soon.  Have a great week!