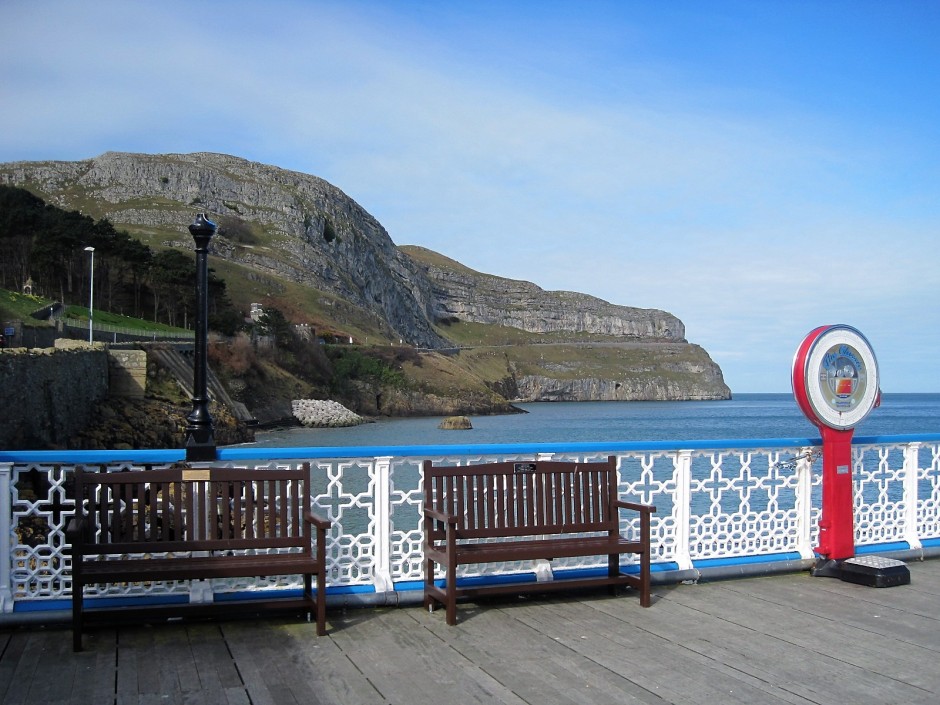 The Great Orme, from Llandudno pier

The last expedition that my Dad made was to Llandudno.  He loved his little mini-breaks with National Coaches, where the driver did all the work, bringing bite-sized chunks of our island within his reach.   He did his share of gallivanting, but as the years wore on he was more focused on a bit of company and a pint.  ‘Did you go up the Great Orme?’ I asked him, on his return.  Turns out he spent most of his time in the British Legion Club.

On our way back from Anglesey earlier this year, the coast road through North Wales took us past Llandudno.  I knew I’d have to take a look, for sentimental reasons.  Did I manage a trip up the Orme? Come with me and see.

Being truthful, I had little idea what to expect of Llandudno, and I was very pleasantly surprised.  In March it was without the throng of seaside crowds, and the chill in the air didn’t matter too much when faced with a long promenade and an empty beach.  And look- a pier!

A flat calm sea, and not a boat trip in sight!  It’ll have to be the pier then.  That’s Little Orme, far out across the bay. 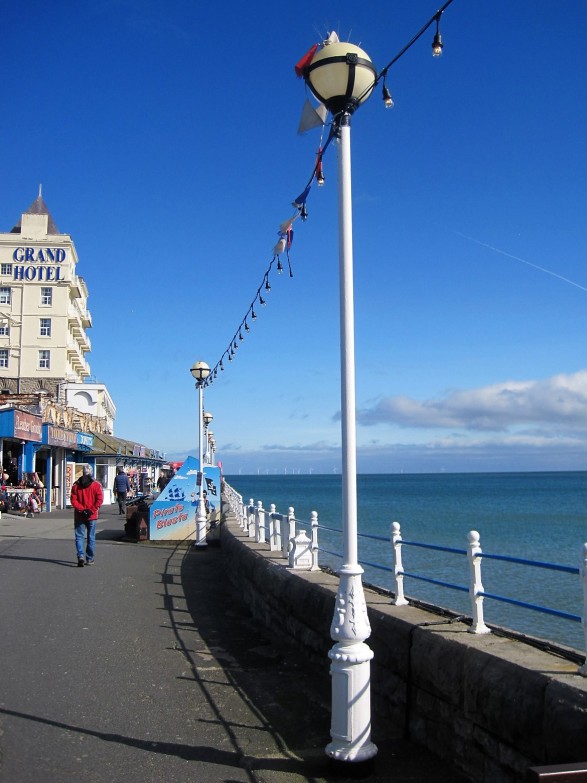 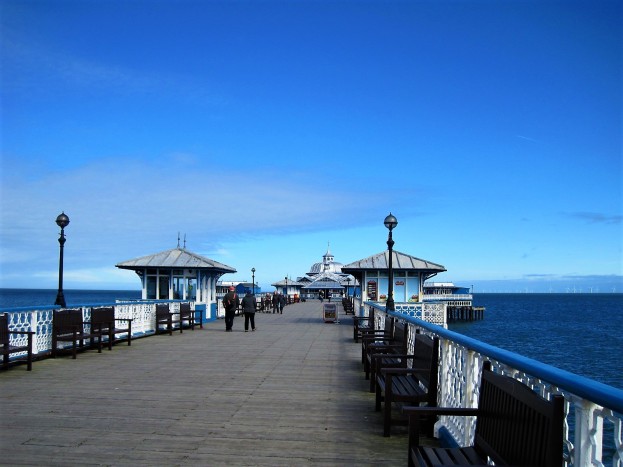 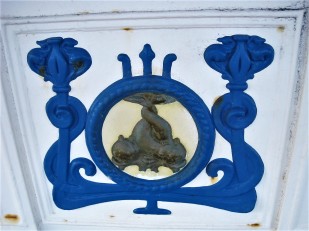 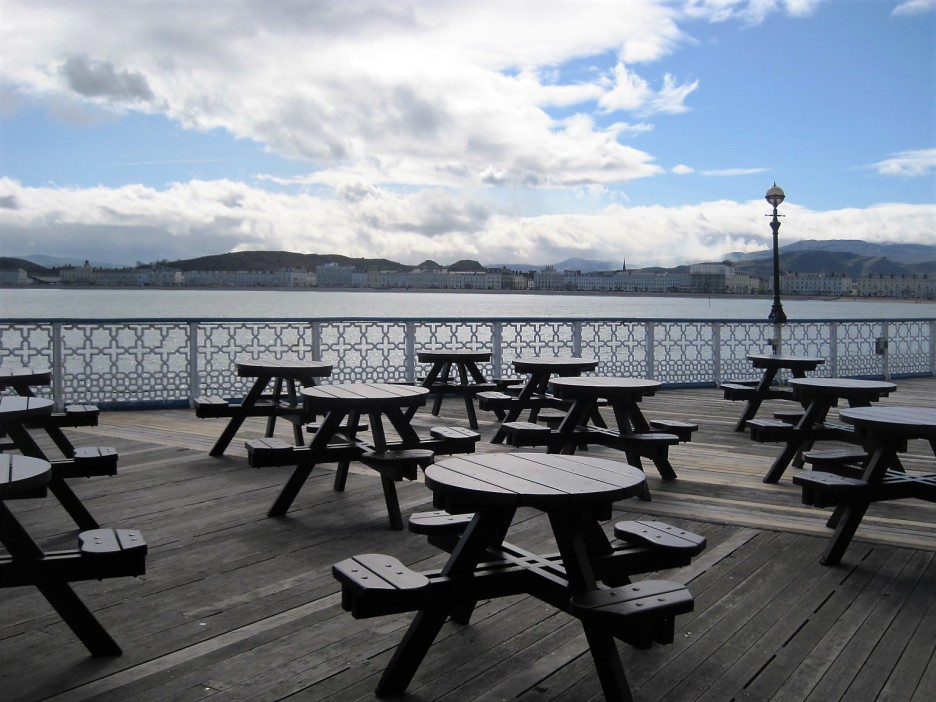 There’s something about a pier, don’t you think?  That sensation of water all around and below. It’s like being out at sea but with a foothold on dry land.  Built in 1878, this one is a Grade II listed building, and is 700 metres long.

There’s lots to learn about Llandudno if you have the time, but I was simply passing through. 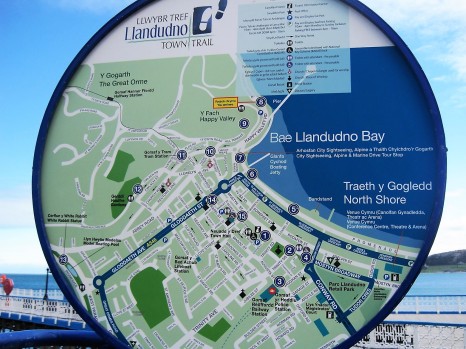 Marine Drive stretches for 4 miles around the foot of the Great Orme, and there’s a former lighthouse, now a hotel, part way round.  I was itching to set off, my husband not so keen.  You can drive around the toll road, but what I did want to do was reach the summit of the Orme.  I had read that the flora and fauna are unique up there, and just imagine the view!

Up above my husband had spotted the cable car.  The chances of it running were slim, but naturally we had to go and check.  Up the hill we went.

Of course, it wasn’t running, but the views as we climbed higher were magnificent.  I was also to discover the Alice in Wonderland connection. 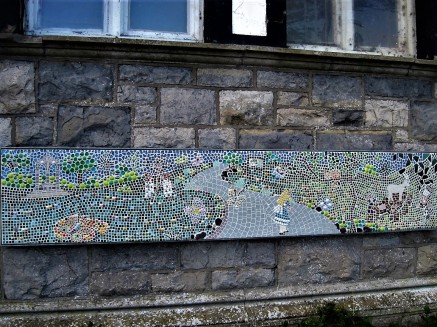 Alice Pleasance Hargreaves (born Liddell) inspired the children’s classic by Lewis Carroll (the pen name of Charles Dodgson) when she asked him to tell her a story, on a boating trip in Oxford.  She and her family regularly spent holidays in Llandudno at ‘Penmorfa’, later to become the Gogarth Abbey Hotel.  Had I called at the Tourist Information office, I could no doubt have picked up a leaflet for the Alice in Wonderland Town Trail.   “Oh, my ears and whiskers!”  55 bronze White Rabbit footprints!

Nevertheless I was happy with the sweeping views of both bays as I climbed the hill from the Happy Valley Gardens. 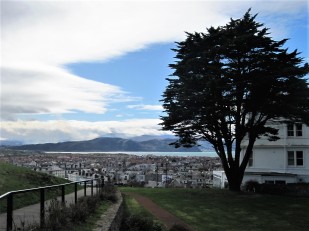 Still optimistic for the tram ride up the Great Orme, I had an anxious eye on the weather as the clouds rolled in.  It had been raining lightly when we left Anglesey and I was sure it was on it’s way.  In the nick of time I spotted the tram station, with tram no. 5  waiting at the platform.

But it wasn’t to be.  The ticket office was firmly closed and, as I watched in dismay, the tram pulled away, with only the maintenance crew on board.

It seemed such a waste!  I really wouldn’t have taken up much space.  Nothing to do but seek consolation in food and drink. 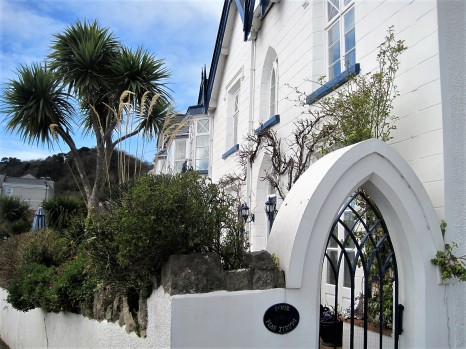 Llandudno has been dubbed ‘Queen of the Welsh resorts’ and there’s an aura to the place that I loved.  Byegone elegance in the architecture, I could conjure the twirl of parasols and the cool sweep of a crinoline just by half closing my eyes.  Perhaps Dad and me were never meant to climb the Great Orme.  I’ll have to leave that to the imagination, too.

The Llandudno website offers a wide variety of things to see and do.  I don’t think you’ll be disappointed.

I’ve scheduled this walk because I was spending the weekend with my daughter, in Nottingham. Apologies if you’ve sent me a walk and it’s not included below.  You’ll find it here next week. Many thanks to all my lovely contributors.  It’s always a pleasure to share your walks.  Details of how to join in are on my Jo’s Monday walk page.  Pop that kettle on now?

A walk with Debbie is always a treat, even if there’s no icecream on offer :

A great-looking bridge and other interesting architecture, from Eunice :

Indra brings us more tales from the Indo-Chinese border :

Sikkim Odyssey 2- Nathu La… the pass that wasn’t there

That lucky Drake is down on the Mediterranean coast this week :

Jackie’s back home in Toronto but reliving a few memories :

I do love a Tall Ship!  Lady Lee takes us to Portsmouth :

While Woolly makes a sad trip in France :

And Hanna a poetic one, in beautiful Denmark :

A Poem is a walk

Just use your eyes, and you can enter Meg’s world :

I’m traveling home this afternoon so I’ll probably be slow with my responses, but I’ll get there. Thank you for your patience and continued support. Have a great week!