Britain’s second largest city, Birmingham, stormed my senses from the moment I first saw it.  Approaching by coach from the north, I gazed in horror at the piles of rubble and the cranes, skulking behind billboards.  In these testing times, it felt not a little like the scene of a recent disaster. But I needn’t have worried.  Apparently Birmingham is constantly reinventing itself, and I very much liked where my footsteps led me.

Frugality being one of my traits, I was staying a little off the beaten track.  As I raised my camera to take a shot of some Lemonade Fizzballs in a shop window, I was unaware that I was colliding with the city’s industrial past.  The Back to Backs on Hurst St. are all that is left of the cheap housing, swiftly erected to cope with the boom times of the Industrial Revolution.  Every imaginable type of industry thrived in Birmingham at that time.  James Watt, Matthew Boulton and William Murdoch, the luminaries in my lead photo, were pioneers and members of the Lunar Society- a melting-pot of scientific and industrial ideas.  I hesitate to admit that ‘rag rugs’ are part of my childhood memories. 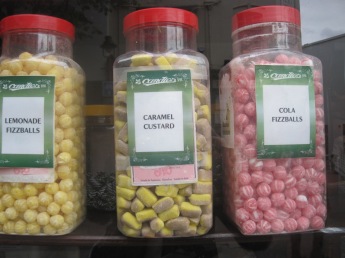 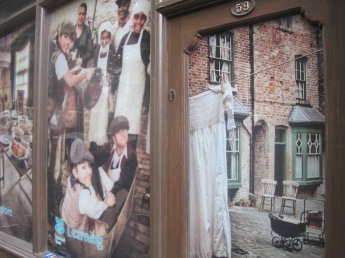 Directly opposite, ‘The Old Fox Theatre Bar’ gave me a warm welcome, as it waited for customers from The Hippodrome Theatre.  The area adjoins Chinatown.  Noodle bars galore and a feast of eating opportunities.  The following morning was not quite so welcoming, and I returned to the city in a fine drizzle. Still, I had a smile on my face, for I was going to be Meeting Gilly.  The couple of hours till her arrival time were not to be wasted, and I set off in a clockwise direction.  The landmark buildings The Mailbox and The Cube were on my agenda. 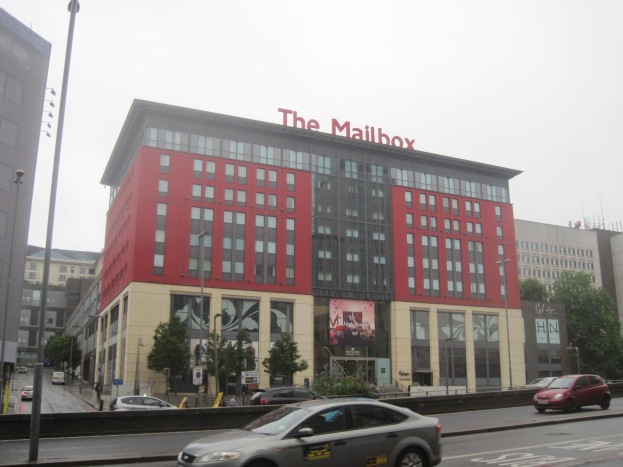 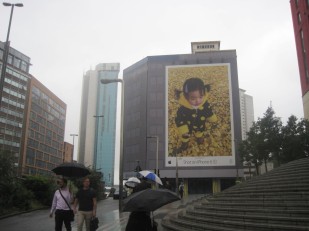 Cheerful lanterns lit the path beneath the subway, then I dripped my way up The Mailbox steps.  What a revelation! 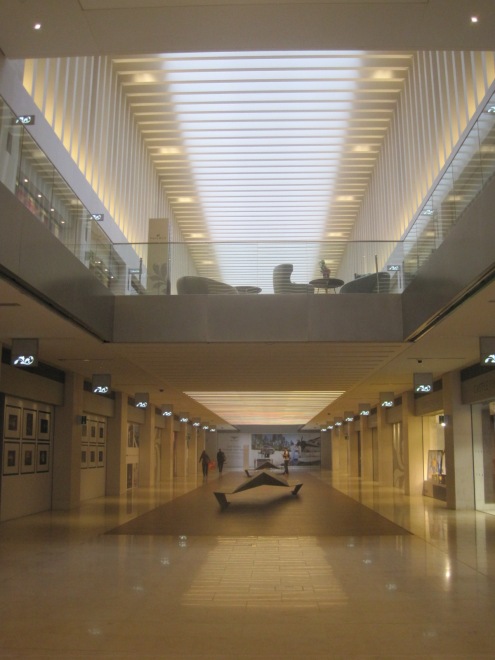 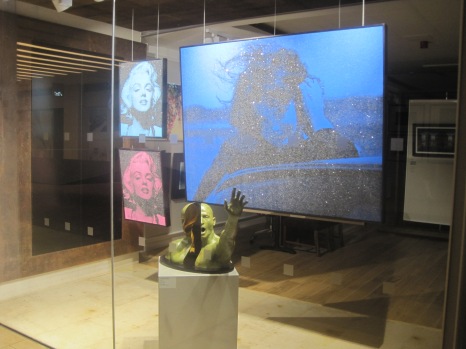 The Mailbox is a combination of art gallery and shopping complex, within the structure of Brum’s old postal sorting office.  I was in need of a little warmth and comfort, and the tulip-shaped chairs of the Bellini & Espresso Bar were pure invitation. 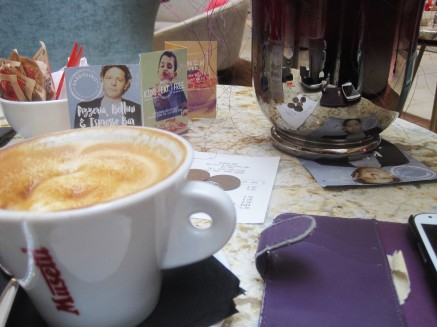 Just as I was settling in to a mouthful of luxury, the alarm bells began to ring and a stern voice announced that an investigation was taking place. Evacuation might soon be called for!  Fortunately, nothing further occurred, but just for a moment…

All too soon I was back on the streets, if anything, even damper than before.  Well, if I was going to be wet, I might as well head for the canals. Boats always boost my mood.  As I turned the corner to The Cube,  I glimpsed water.  Closely followed by soggy boats and dripping padlocks! 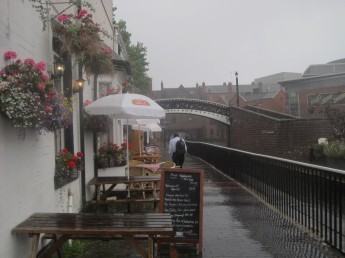 You might recollect that this pub in Gas Street Basin is where, later, I ate with Gilly.  The vegetarian menu looked promising, if a little damp!  As I looked back at The Cube, I thought I saw just a hint of sunlight.  Was I fooling myself?

Back under the subway, I headed along Navigation St. in the direction of New Street Station.  This building had been beckoning to me for a closer look ever since my arrival in Birmingham.  A futuristic train shape, from a distance it intrigued.  Close quarters revealed a multitude of reflections. 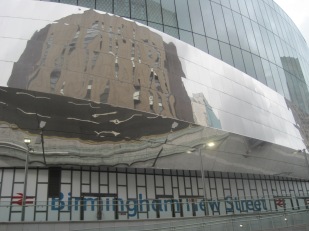 And THEN my eyes lit up.  Trams!  A source of much childish delight for me.  I studied their comings and goings for a few minutes, but it was almost time to go and meet my accomplice for the day.  The skies had brightened at last as I headed towards the coach station.  Just as I was consulting my map, looking for an elusive Mill Lane, a burst of sunny rain hit me.  Up went the brolly again, and I hopped onto the steps of a small, friendly-looking police station.  Seconds later, my phone rang.  ‘Where are you?’ a smiling voice asked.

Now I don’t know quite why, but a little voice inside my head was singing ‘if you want to know the way, ask a policeman!’  Well, why not?  In I went, and the police were every bit as friendly as their station looked.  They insisted on going online to find Mill Lane for me. By the time they had done so, my ray of sunshine had arrived.  Grinning from ear to ear.

Meeting Gilly tells the story of our day.  Linking arms we set off, first in search of refreshment, and then in the general direction of Birmingham Library.  A peep inside St. Martin in the Bullring was just enough to reveal the ravishing stained glass windows by local artist, Edward Burne-Jones. (Sorry- no photos allowed).  Bypassing The Bullring, reincarnated in style, and on into New Street, where we both delighted to find old style shopping arcades with beautiful ceilings. 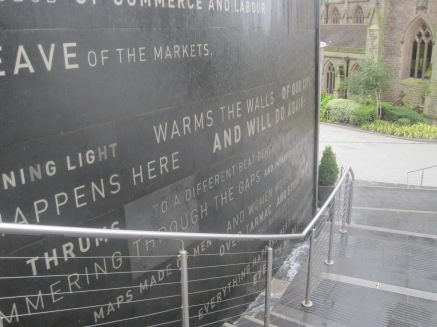 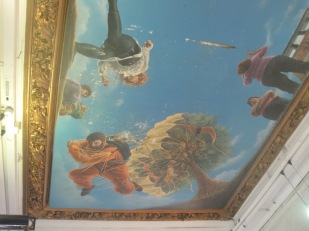 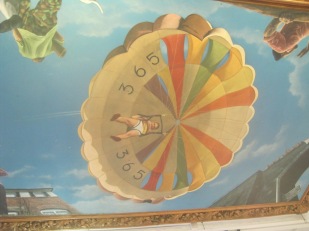 So much to love about Brum!  By now I was starting to take the cranes and the billboards for granted.  I could forgive much in a city with a library like this one.  I wish I’d had time for the Secret Garden on the 7th floor and more than just a glimpse at the Shakespeare Memorial Room. 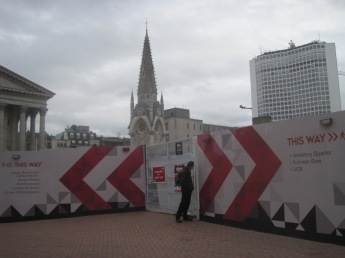 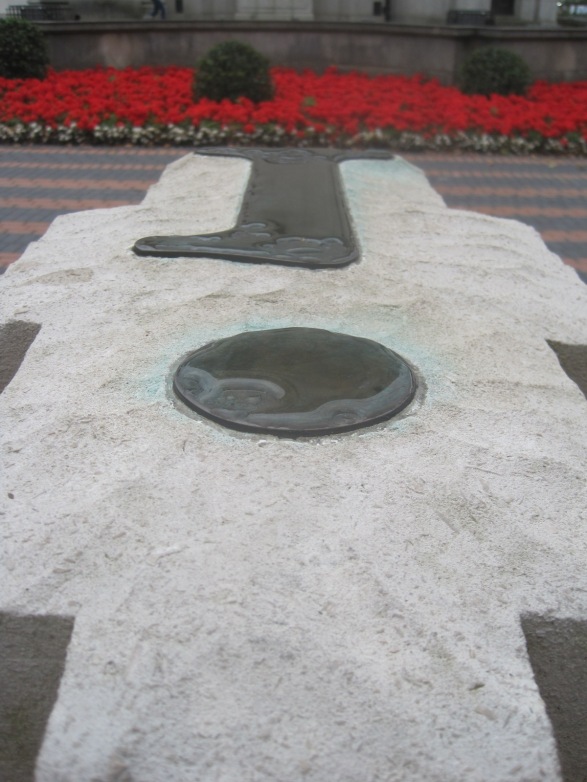 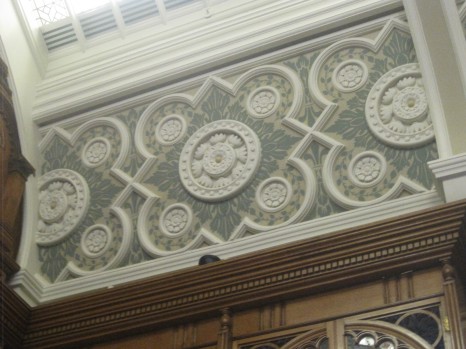 I guess what I’m saying is that 24 hours in Brum is not enough!  I still need to know more about Brindley Place and the sensory clock. And we never did manage to fit in St. Philip’s Cathedral with it’s Burne-Jones stained glass masterpieces.  Nor even try Fumo’s restaurant, recommended by my good friend Richard (A Bit of Culture) and the Rough Guide. 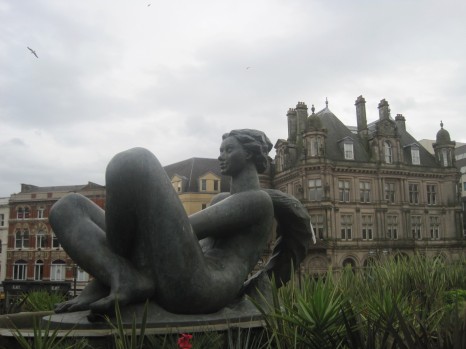 Get yourself a city map and take a walking tour.  You won’t regret it!  And now, for goodness sake, where’s the coffee?

Thank you so much everybody, for putting up with me and my rambles.  I thoroughly enjoyed my time in Birmingham with Gilly.  If you have a walk you’d like to share, you can join me anytime.  The details are on my Jo’s Monday walk page, or just click on the logo. And now the best bit- some wonderful shares!

I missed one last week so humble apologies to Liesbet in Massachusetts :

(Super)Natural Wonders around us

Becky made me smile with some wonderful memories of Lisbon (and a bit of humph-ing!)

And from the Azores… be still my beating heart!  Thanks, Susan :

Prepare for a lot of knowledge about the Hurons!  Jackie’s on the case :

Sainte-Marie Among the Hurons

Something a little different from BiTi this week :

And Geoff is ambling along a river bank, being smug.  With Dog, of course!

Violet Sky has found the nicest garden to match that nice town.  Have a wander!

A nice garden in a nice town

Cathy’s latest is huge!  Check out the Orangery :

Jaspa’s building up a sweat in among some beautiful Mayan ruins :

And cooling down by the water in a lovely Cornish village.  Different, huh?

One of the loveliest walks it has ever been my privilege to feature.  Meg, you’re a love!

Vignettes from a morning walk, 5

What a corker from Corey!  Jude, you’ll love this one :

Carol in Cairns!  Has a good sound to it, don’t you think?

And an encore from Badfish!  Only now he’s playing at Knight’s Templar in a sublime setting :

Another Side of Malta : Day One

Sorry if I’ve walked you to exhaustion this week.  I promise to be kinder next Monday.  Have a great week and take good care of yourselves.

P.S I just popped over to Monday Escapes and it reminded me to say ‘White Rabbit’!