Who do you know that’s crazy enough to sit on a coach for 8 hours in a day just to meet me?  Why, Gilly, of course!  My lovely Lucid Gypsy friend. She of the luscious poetry and the lust for life.  Crazy, but so lovable!  Warm-hearted, impulsive, prone to hugs and tears, yet a lady of very good taste.  Didn’t she ‘follow’ me to Tavira, and like what she found there?  (Just the right mix of shabby and chique)  All this I knew, but not the lady herself.  If you’ve never ‘met’ Gilly, you’re in for a treat.

Doesn’t that smile say it all?  Of course, there were the charms of Birmingham on offer too.  It’s not every day you’ll find charm and Birmingham in the same sentence, but I absolutely loved the city.  Even though on arrival I thought I’d come to a demolition site!

It was Gilly’s suggestion to meet in ‘Brum’ (didn’t I say she was a lady of taste?).  A ‘midway’ point between Hartlepool in north east England and Exeter in Devon.  We actually managed 8 hours together, which in the circumstances wasn’t bad.  A week might have been better.  What did we actually do, you’ll be wanting to know?  Talk!  Laugh!  Share stories.  Exchange hugs.  But not enough!  Never enough hugs.  I’ll give you a quick glimpse of our day.

It was raining gently when I got up, and this steadily increased to a deluge.  But Gilly brought the sunshine with her.  First stop, coffee, of course! No, don’t get over excited!  Gilly had an Eccles cake to keep her going till lunch.  Nothing more exotic, for now.  I had booked us on to a guided walking tour (well, you know me!) at 1.30pm.  So, after talking, and talking, we set off in the direction of the Library, for the start of the tour. 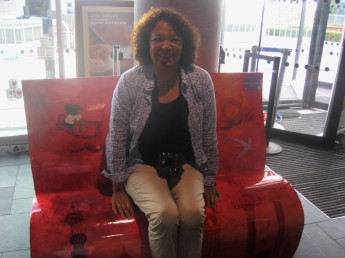 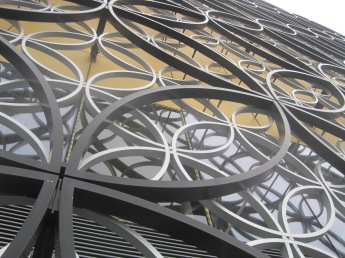 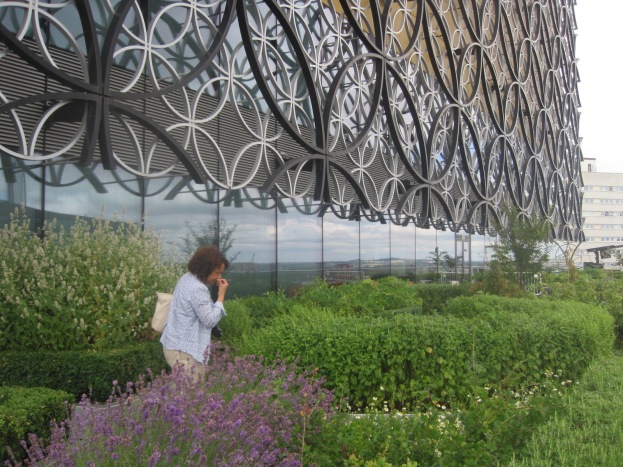 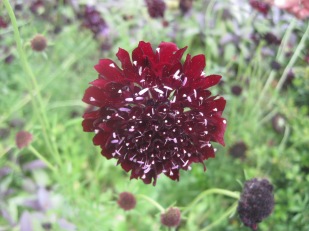 Not just any library, you understand.  Birmingham Library is a monolithic yet beautiful structure, and I suspect we could have spent most of our day there.  Built over 10 levels, with garden terraces on floors 3 and 7, with a Shakespeare Memorial Room in the Rotunda at the top.  Need I say more? 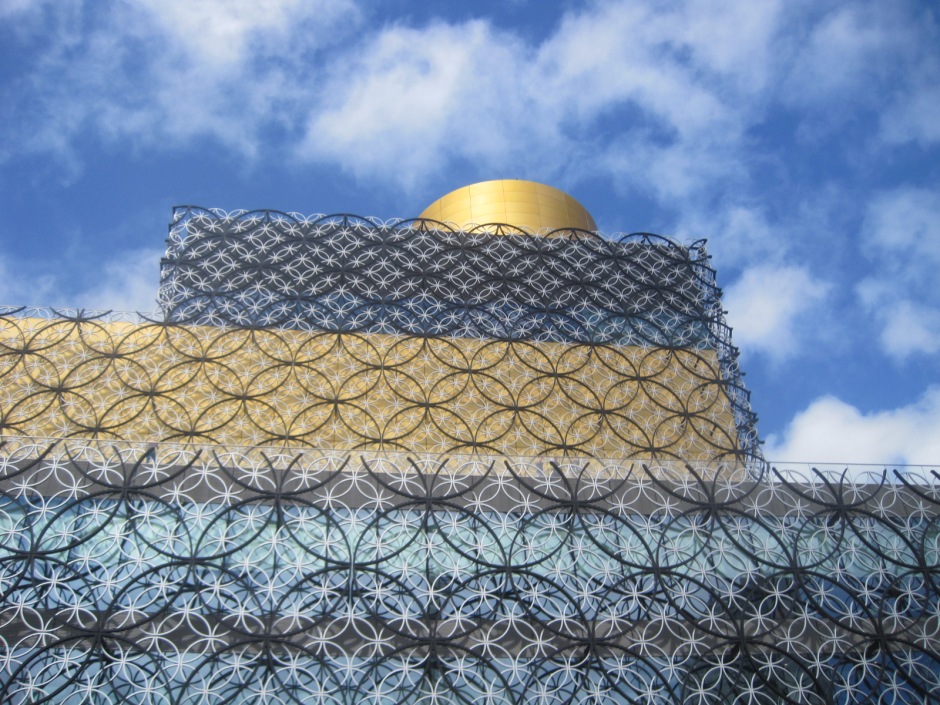 Look- blue skies too!  We raced back down from the 9th floor just in time to join Jonathan and Dawn from Positively Birmingham Walking Tours. Jonathan, a history buff, and Dawn his apprentice.  I’ll spare you the details but it was quite useful for orientation. Our visit had coincided with graduation day for the Law students at the university, and as we headed into the ICC we were awash with gowns, mortar boards and excited faces. 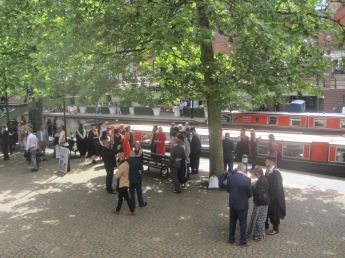 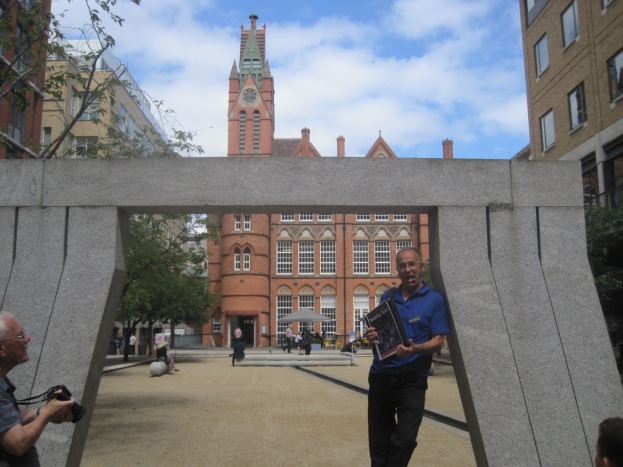 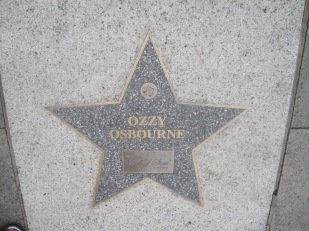 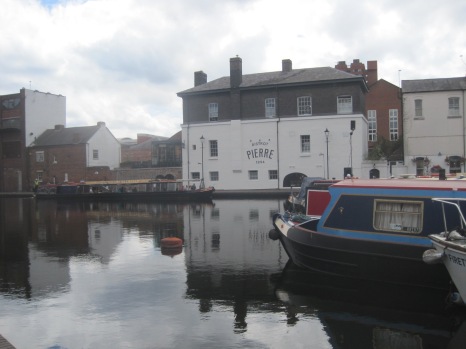 For me, the best bit was Gas Street Basin and the narrowboats, and exchanging smiles and small asides with Gilly.  The tour was to last 1-2 hours, but time together was precious for me and Gilly.  And hunger pangs were setting in.  Back at the Library we tacitly agreed to drop out, made our apologies and headed back to the canals.  We sat outside the delightfully quirky Canalside Bar and let the world of water entertain us.  And talked, around eating and drinking, of course! 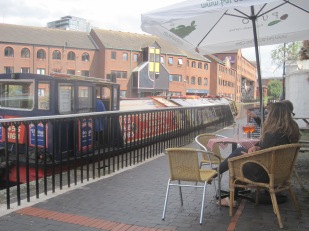 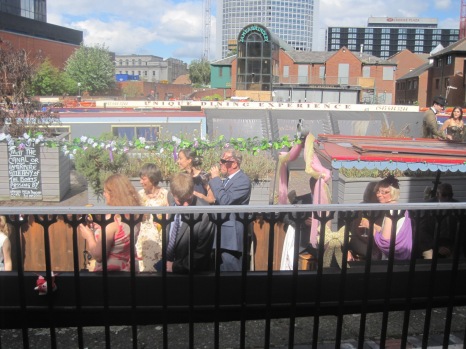 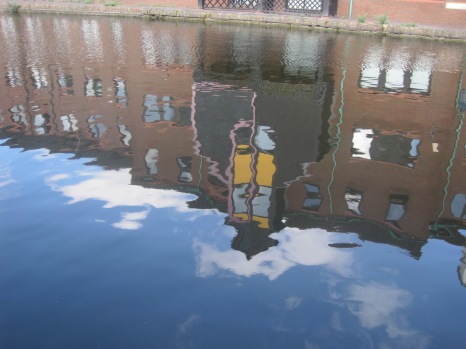 All too soon it was time to head towards separation.  I walked Gilly back in the direction of the Bull Ring and there we found a sunny seat outside Bill’s.  Apparently also a favourite of Gilly’s down in Exeter.  Bramble mojito was a very lovely way to round off our day.  Gilly had Peach Bellini.  Ah, bliss!  I wonder when we can do it again? 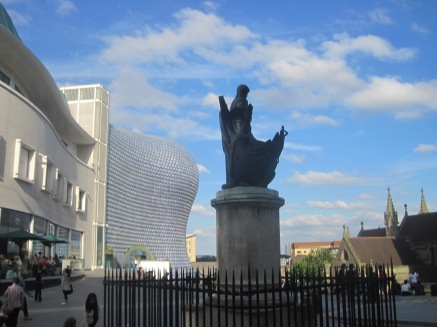 For Gilly’s version of events, have a look at A Gypsy and a Restless One.