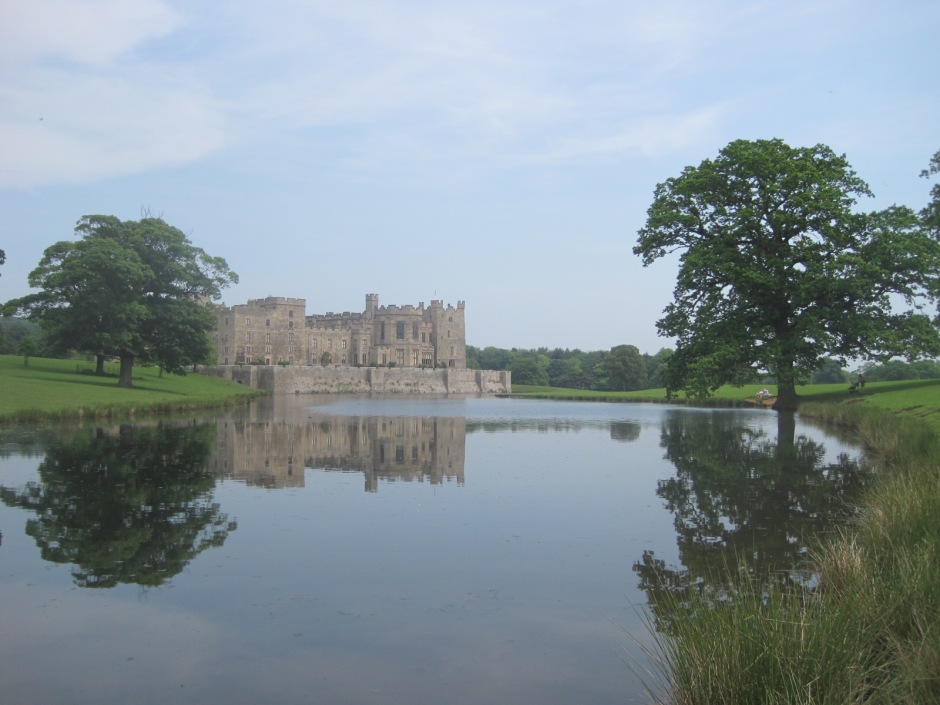 I’ve passed by Raby Castle many times on my way through the Durham Dales.  The market town of Barnard Castle with its lovely riverside setting, 8 miles further west, is a favourite location of mine.  Always I’ve had my nose pressed up against the car window. How many deer can I spot?

A sultry, sunny day in June seemed like a good time for closer observation.  250 acres of parkland surround Raby Castle, and herds of Red and Fallow deer roam free.  I was desperate to park the car and run after the deer I could see, grazing beneath trees in the distance.  But, no!  Not a good idea.  For one thing, May to July each year is the period in which calves are born, and it is vital to retain a healthy distance.  Human contact can deter a mother from feeding her young, and there are warnings never to touch, even if the calf appears to have been abandoned.  A watchful eye for strays is kept by the park rangers.  So I looked for distraction, beyond a garden gate. 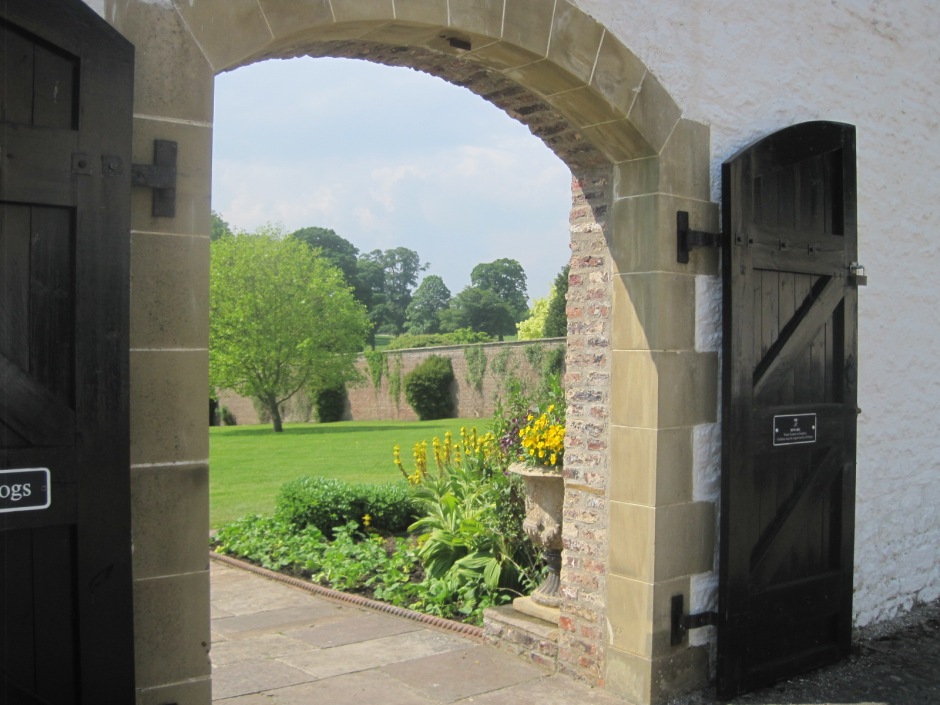 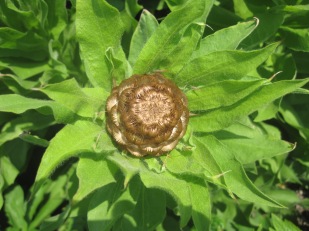 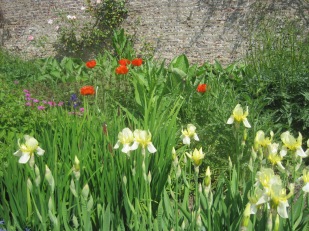 In my preoccupation with deer, I had entirely forgotten that Raby Castle has an 18th century walled garden.  Totaling 5 acres, it retains many of its original features.  The walls were built with locally handmade bricks, with a heating system of flues inserted.  This enabled sub-tropical fruits like apricots to be grown.  The White Ischia fig is a survivor from 1786, now in its own glass house.  In addition there are two fine old yew hedges, and an ornamental pond, originally used to provide water for the kitchen garden. 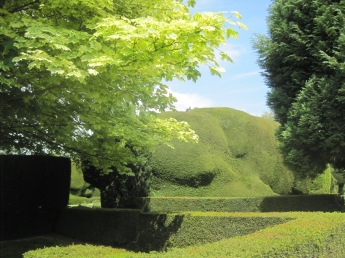 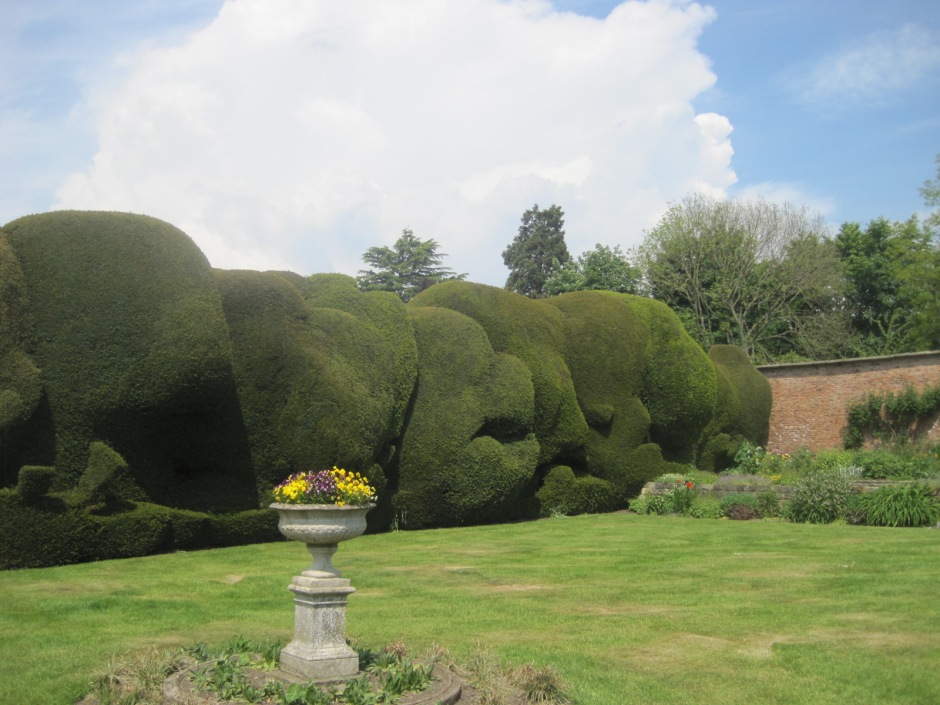 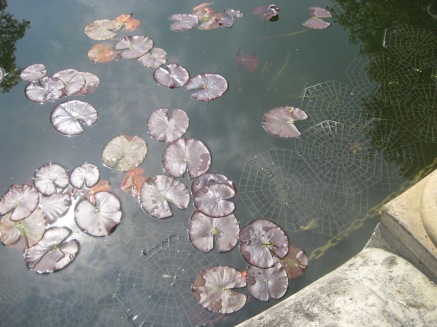 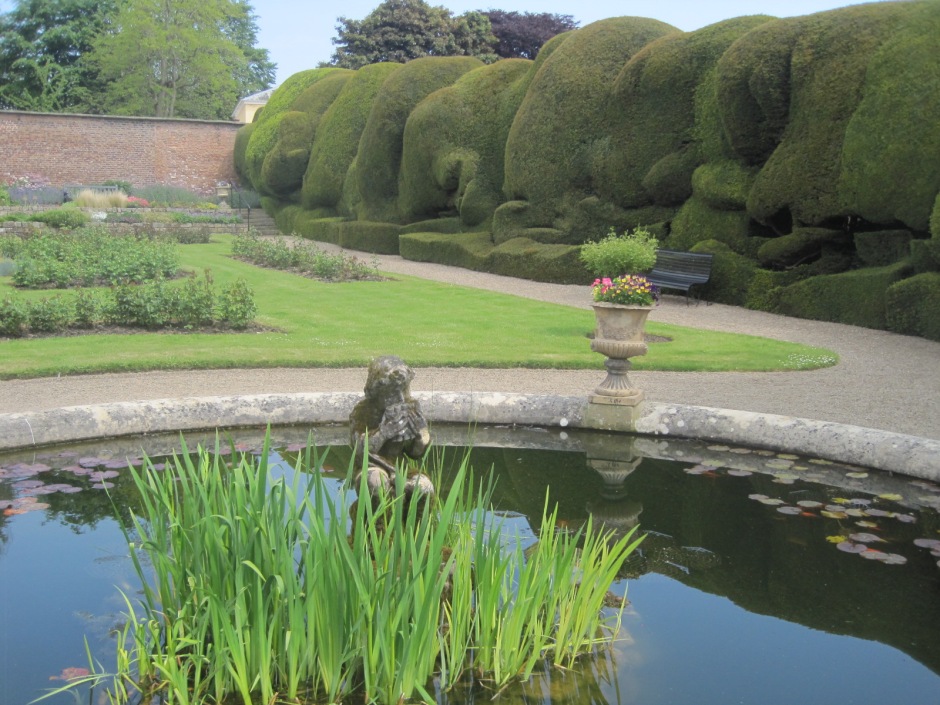 An English garden in summertime.  People wore bemused smiles.  This was how it was supposed to be.  A gentle, hazy warmth wrapped around buzzing borders, while Pan played softly on his pipe.  And pouting cherubs looked on. 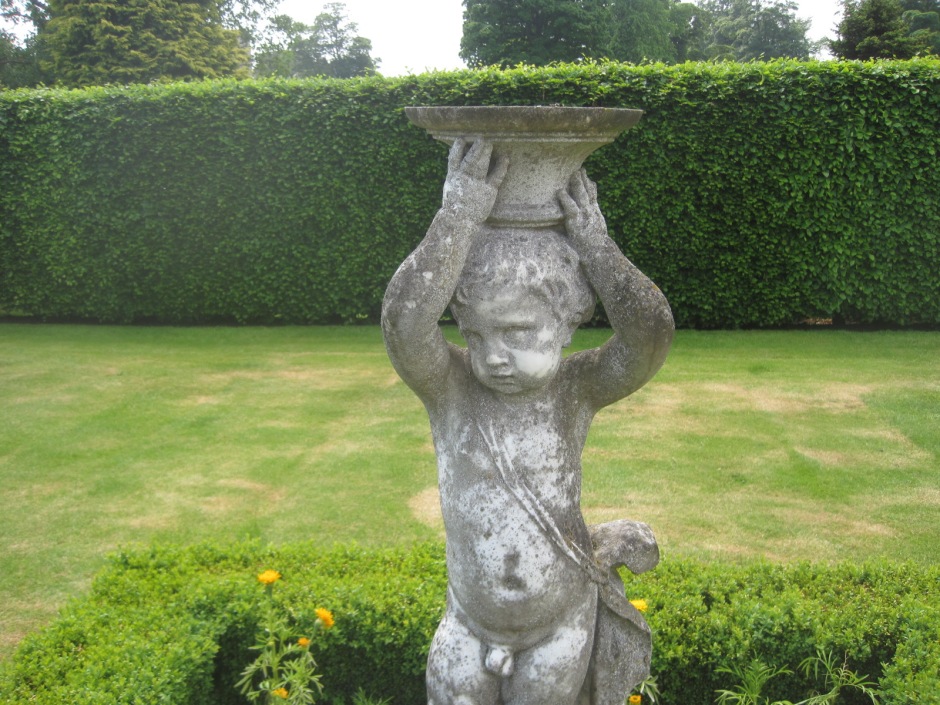 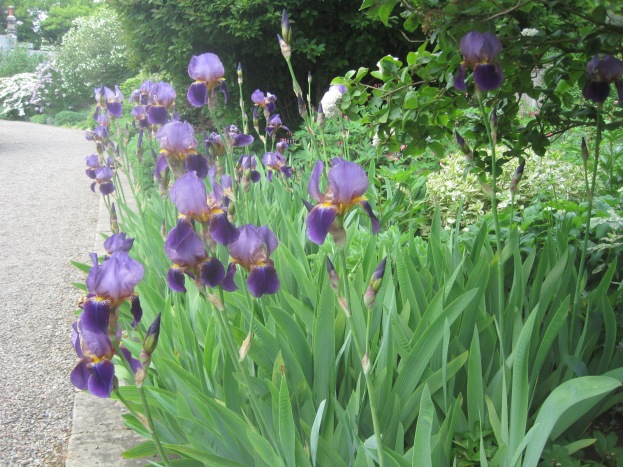 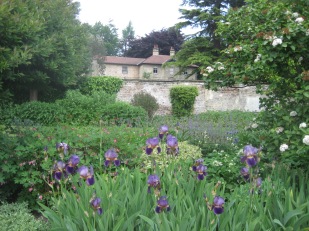 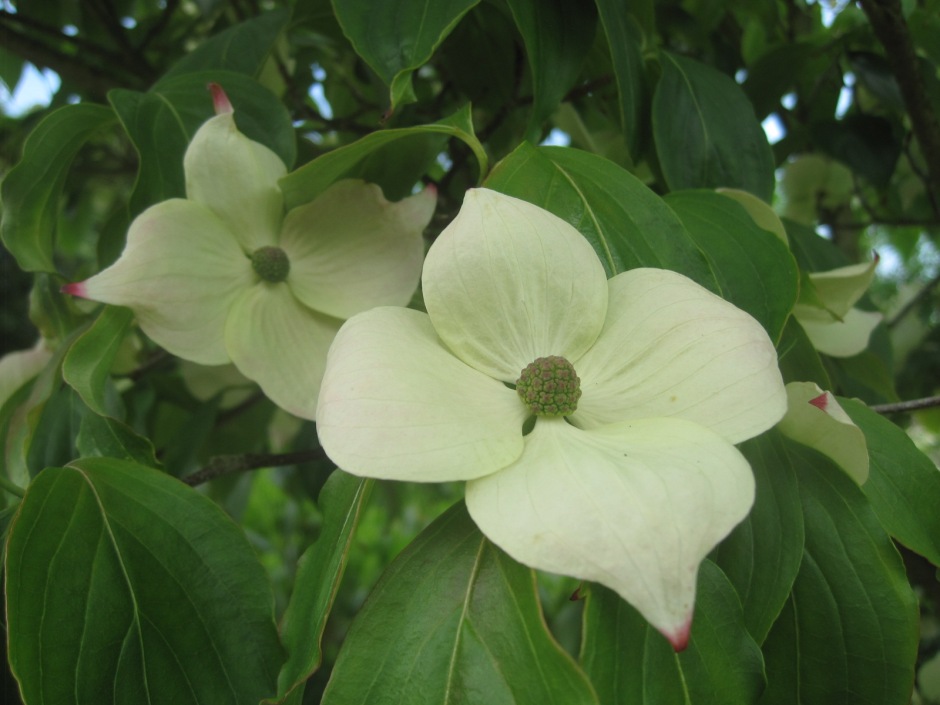 Paths lead around and through, and it’s a beguiling place to linger.  Aloof violet iris nod regally at pristine white cornus, with just a smidgeon of pink tip.  A blaze of azalea cocoon a garden bench.  The castle and it’s deer park are forgotten, bar an odd tantalising glimpse. 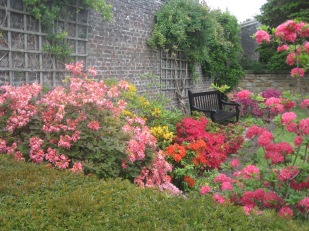 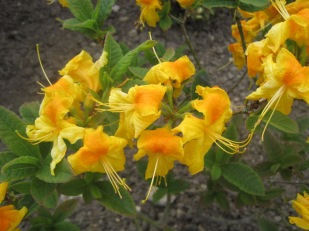 For those of you who grumbled about misshapen scones in my Sutton Park post, now is probably a good time to pop into the tearooms. These are situated in the 18th century Coach House & Tack Room, and are themed rather nicely.  I do like a scone! 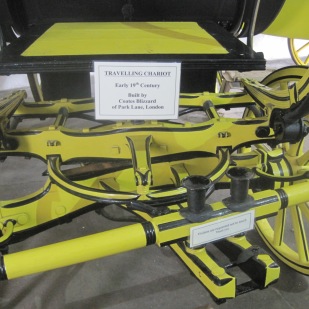 Visiting the castle was by guided tour only.  I would love to have shown you round, because it is as impressive a building as I have ever been in. Unfortunately photographs were not permitted.  Out of respect for my very charming and knowledgable, old world guide Robert, I refrained from taking any. (I have been known to cheat just a little, even in Buckingham Palace)  If you ever visit I do urge you to take the tour.

The Viking, King Canute, owned this estate in the 11th century.  Raby derives from the Danish, ‘ra’ being a boundary and ‘bi’ a settlement.  Since then the Nevill family, one of the most powerful families in the north of England, has been responsible for building and adding to the castle.  For almost 400 years the Nevills held sway, but involvment in the ‘Rising of the North’ in support of Mary Queen of Scots was to be their undoing. Charles Nevill, 6th and last Earl, fled to Holland where he died in poverty in 1601.

If the history interests you, much more can be found on the castle website.   There’s still a little walking to be done.  According to the leaflet, a stroll from the castle around High and Low Ponds takes about an hour.  I would suggest much less, unless you take a picnic.

Have you seen any deer yet?  Look over there in the distance.  We’ll approach very carefully.  No sudden movements. 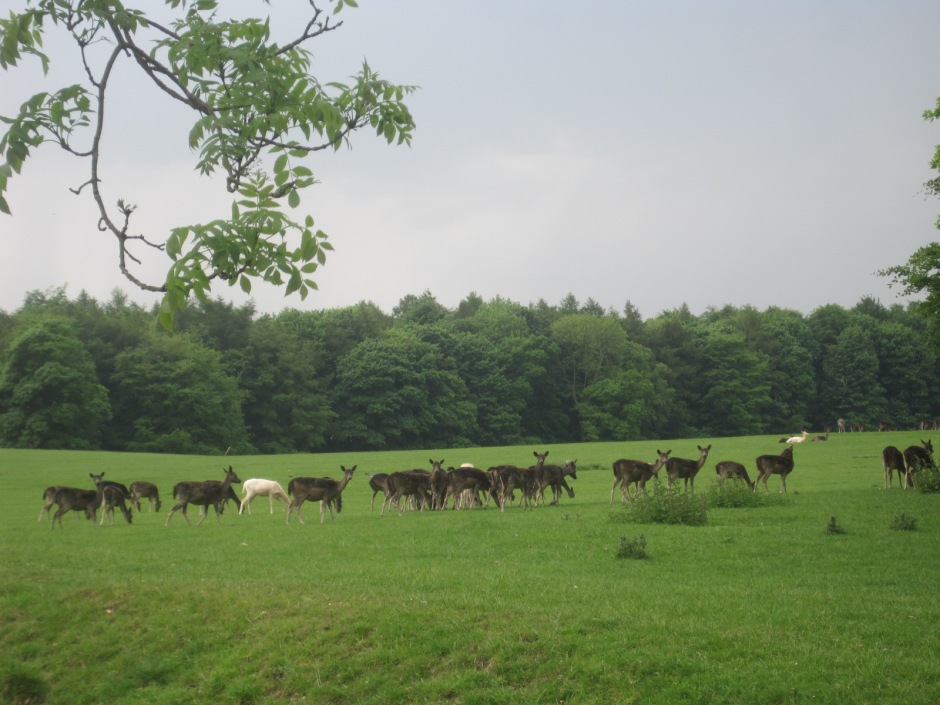 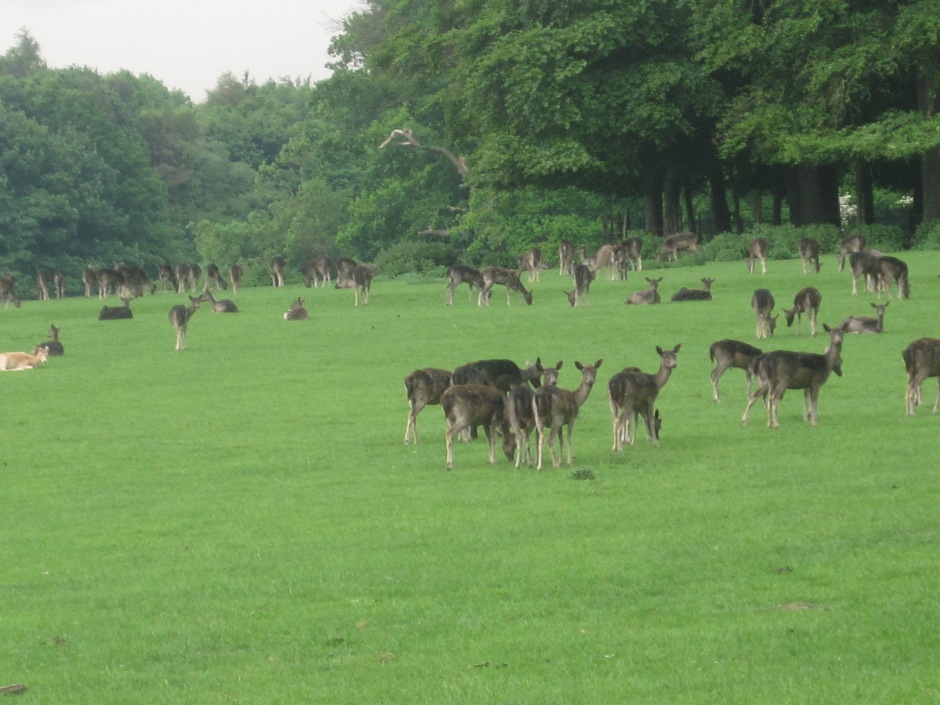 Oh, oh!  They’ve seen us!  Time to go, I think.  I hope you’ve enjoyed it.  I know I have.  Full details of how to get there and opening times are on the website.  If you’re ever in the north east I can highly recommend it.  Time for a cuppa?

Thank you everybody for keeping me company, and for the support.  Yet again I have some superb walks to share with you.  If you’d like to join in at any time, details are on my Jo’s Monday walk page.  Just click on the logo above.  Let’s get reading!

This post was a particular delight to me as I could picture myself there, a few years ago.  Thanks, Laia!  And Gilly- you’ll love it!

Barcelona from a local- pirates, cacti and a magic fountain

But my view from the Giralda tower was much damper than Debbie’s :

Complete contrast, and a special anniversary present for Lady Lee :

Phoebe shares a secret in the South of France :

I love an Open Garden, be it in England or Scotland.  Thanks, Anabel!

And Smidge’s post is everything you could want for in lovely Scottish views :

Or there’s always a spin on the common with Geoff and Dog :

You could even cheat with Jackie and ride on the bus!

If you don’t mind a few midges you could go camping with Liesbet :

A Weekend of Camping and Hiking in Vermont

Or why not follow Drake to somewhere that looks really idyllic?

Fancy a stroll through a City of the Dead?  Not for everybody, perhaps, but Jaspa definitely enjoyed it :

A rather more traditional walking tour with Nicole, this one is exactly my cup of tea :

That’s it for another week.  Again, my thanks to all, and I hope you have a great week ahead.  See you soon!