In Largo 1 de Dezembro, a busy square near the river front in Portimao, traces of Portuguese history linger.  A series of benches commemorate events from the past.  Some depict the glory years, when Portugal had an empire and her explorers roamed the world. Others, significant turning points, like the foundation of the Portuguese nation, on 5th October, 1143, shown above.

Not a peaceful scene to accompany a lunchtime sandwich, this bench commemorates the Battle of Aljubarrota on 14th August, 1385. One of many battles with Spain, here King Joao 1 and his general Nuno Alvares Pereira defeat the Castilians. 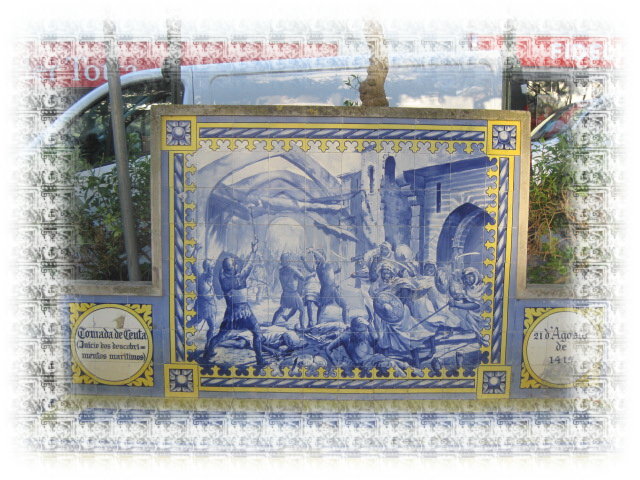 The Portuguese Empire spanned almost 600 years, from the capture of Ceuta in North Africa in 1415 to the handover of Macau to the People’s Republic of China in 1999- the longest lived of any of the European colonial empires.  The scene above shows the fall of Ceuta in Morocco, on 21st August, 1415. 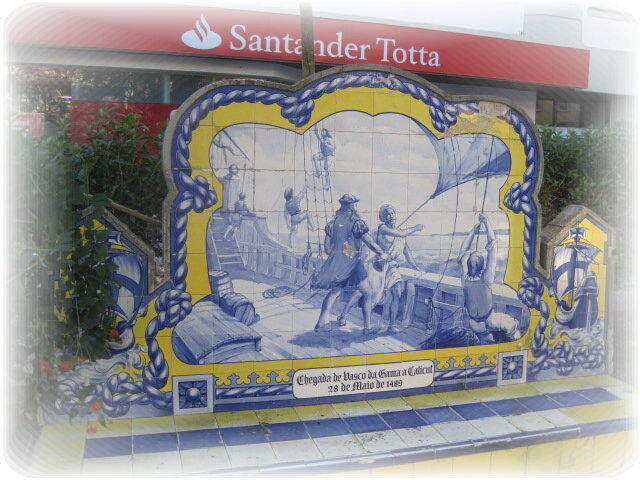 Probably my favourite scene denotes the arrival of the Vasco da Gama in Calicut, India, on 28th May, 1489.  Below we have the discovery of Brazil, on 24th April, 1500.

Brazil provided a safe refuge for the Portuguese monarchy during the Napoleonic Wars but all good things come to an end and Brazil finally achieved independence in 1822.

The October Revolution in 1910 resulted in the overthrow of the monarchy, the expulsion of the Braganca dynasty, and and the founding of a Portuguese Republic.   Still, it makes a pleasant bench to sit a while and contemplate history.

I hope you can enjoy a lunchtime linger.  Jude asked for Benches with unusual details this month. The condition and situation of these benches means I’ve had to employ a little artful disguise.

Like many people I thought that the name azulejos (the type of tile shown on these benches) came from the Portuguese word azul, or blue.  The name actually derives from the Arabic al zuleycha.  Just one of many delightful things I discovered while reading the online magazine Enjoy the Algarve.  You might like it too.