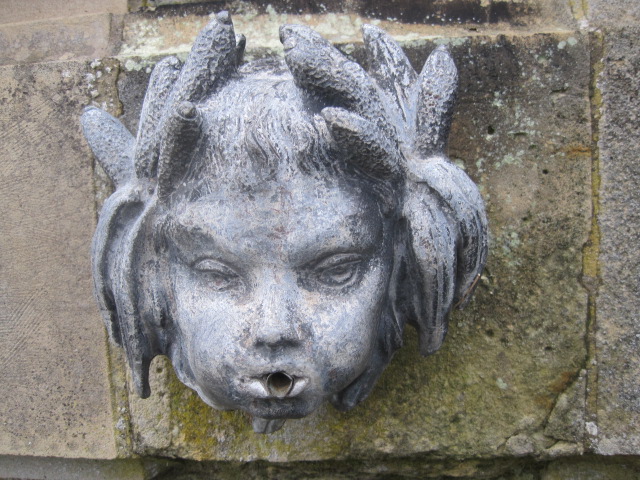 Some of you may remember that around this time last year I met my daughter for a Grand Day Out, at Chatsworth House in Derbyshire?  The house was beautifully decorated for Christmas, and I would have loved to do the same this year.  Instead I had to settle for a visit to another of England’s beautiful historic homes, Castle Howard in Yorkshire. It’s every bit as fine as Chatsworth, but I had to substitute a husband for a daughter.  Fortunately, he doesn’t mind a walk in beautiful gardens.

The more observant among you will have noticed a reference to a Polar Bear Walk.  Now don’t get too excited- I didn’t find any!  Which was a source of disappointment as it was certainly cold enough for them.  Set within 1,000 acres of beautiful landscape in the Howardian Hills, the house is described by Lonely Planet as ‘one of the world’s top ten greatest mansions’.  That’s quite a claim!   Come with me and see what you think. 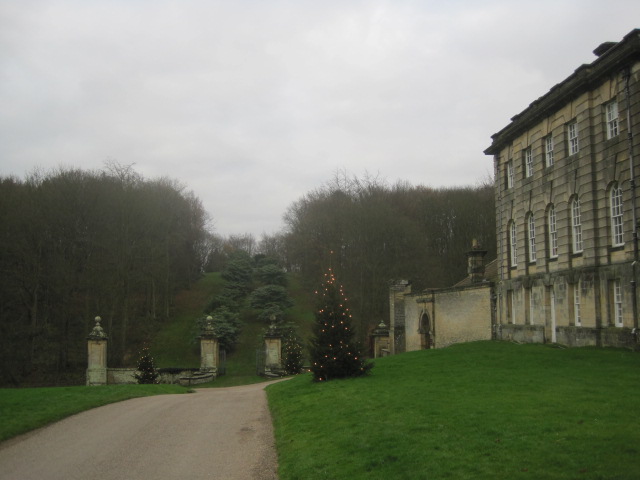 So it was time to go hunting for polar bears

The zigzag of trees climbing the slope was referred to on the map as Polar Bear Walk.  It didn’t seem too much to expect, but I could see neither hide nor hair of one.  Nor could I find an explanation of the name.  Oh, well! 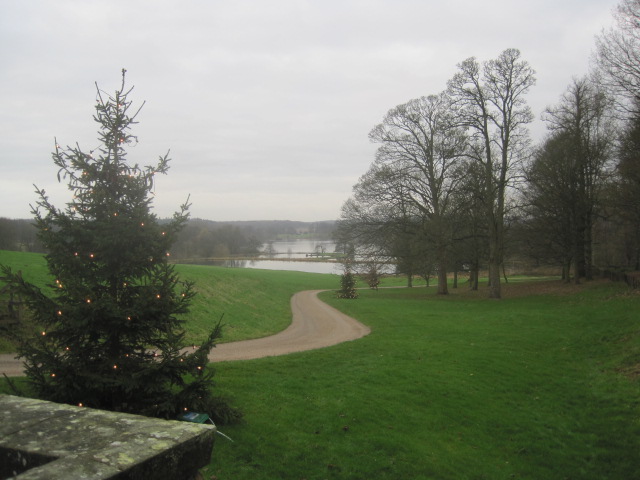 There was a nice view across the lake.

The sky was an unrelenting shade of gloom but, undaunted, and in the interests of getting warmed up, a scramble up Polar Bear Walk was called for.  It leads to the Reservoir in Ray Wood. A reservoir of sorts has existed in these woods since the 18th century.  Filled from a nearby stream, it supplies the two main fountains in the grounds below, using the force of gravity to drive the fountain jets.

With 25 acres of woodland, many of the trees and shrubs in Ray Wood are original species, brought from around the world by the great plant hunters of the 19th and 20th centuries.  The acidic soil supports a variety of thriving rhododendrons- one of my favourite plants. 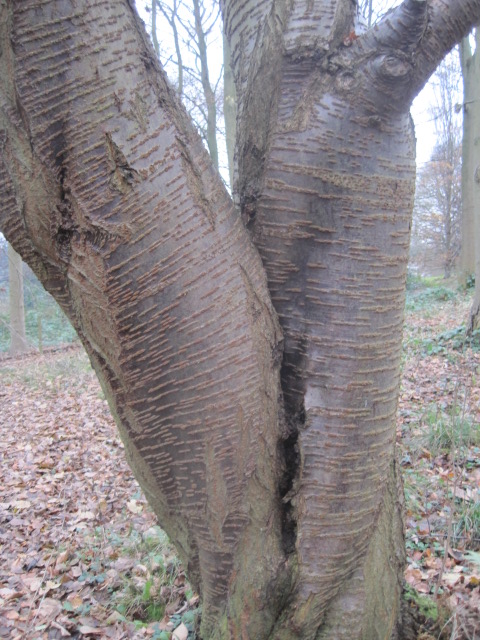 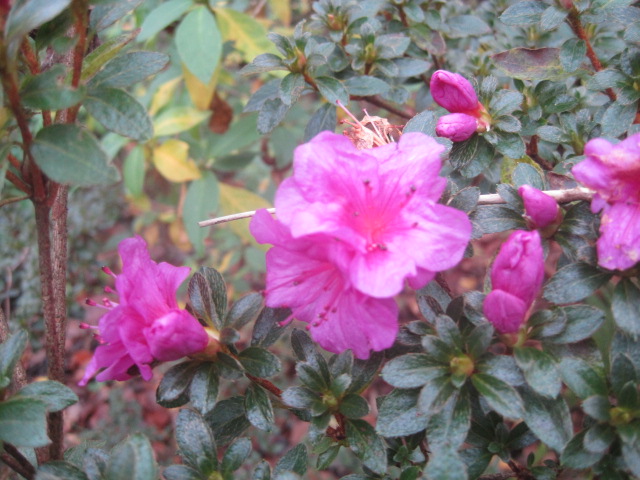 But look what I managed to spot- in December!

And a statue or two

I loitered for quite a while, watching some grey squirrels frolic.  They kept a playful eye on me, and easily managed to stay out of camera shot.  I always have that kind of relationship with squirrels!  Consulting the map I’d picked up at reception, it was time to leave the woods and press on to the Temple of the Four Winds.  Would this be as draughty as it sounds? 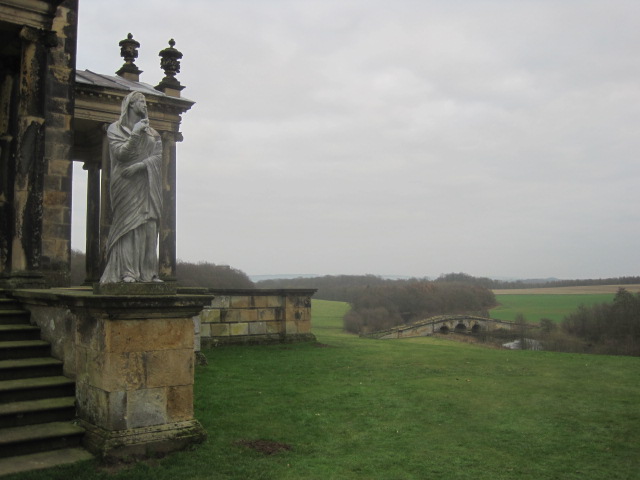 It was certainly a little bleak on this grey old day

Originally known as the Temple of Diana, it was designed by Vanbrugh, but remained unfinished at the time of his death in 1726.  Ten years later the interiors were finally decorated by the stuccoist Franceso Vassalli.  The temple was used as a place for reading and refreshment, and beneath it is a cellar where servants prepared food for the family. The temple can be entered on one of the free guided tours, which take place between March and October.

It’s quite a vantage point, isn’t it?

Even set against such grey skies!

There are a number of monuments within the estate, and heading down to the gently curving New River Bridge, the Mausoleum becomes visible on the horizon.  Designed by Nicholas Hawksmoor, it stands 90 feet tall and is supported by a colonnade of 20 pillars.

The Mausoleum, on the horizon

And in a little more detail

The bulrushes don’t seem to mind the mist

Statuary dot the grounds and it’s a shame that the sky is not brighter because they really don’t look their best.  The forecast was for a little blueness between 2 and 3 o’clock.  ‘A little’ was all I saw.  The following day dawned bright and blue, but I was elsewhere. 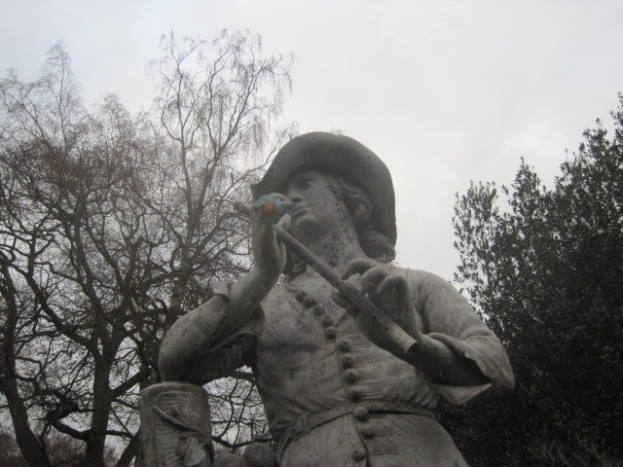 A shepherd boy with his lute 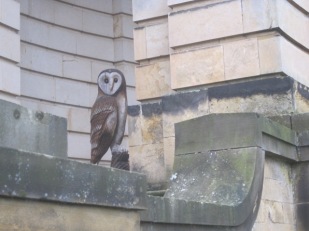 I almost missed this fugitive from the woods!

Visible from the house and by far the grandest sculpture in the grounds, the Atlas Fountain is beautiful.  The 3rd Earl of Carlisle, now interred within the Mausoleum, started the creation of the waterways which give the estate its character.  There are lakes on both sides of the house, and in Summer you might even go boating on the Great Lake. 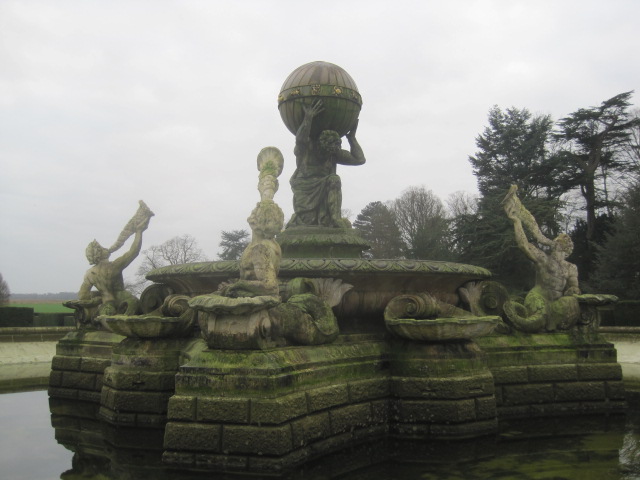 The Atlas Fountain, with its patina of age

Atlas holding up the world

The sculptures in the shallow water

I hope you enjoyed the walk, despite the dreary skies.  I did, but I’m pretty sure that I will be back to join a guided walk in the Spring, when the rhododendrons are in full bloom.

The Castle Howard website is full of information, including details of how to get there.  The photos show it at its glorious best.  Later in the week I’ll be taking you inside the house and I can promise you a lot more colour.

You might need the kettle on for a ‘warm up’, then sit back and enjoy the walks I have to share. Details of how to join in are on my Jo’s Monday walks page.  Many thanks to all my contributors, far and wide.  It wouldn’t be the same without you.

Shall we start in paradise, with Jude?

Here’s a different, but still lovely, shoreline with Drake  :

Walk the line, the coastline

The sport of Mums

Then a hop ‘down the way’, to Dallas, to enjoy Amy’s beautiful photography  :

It’s snowing on Gilly’s blog, but not in her world!  :

It may be December, but…

In Switzerland you have a good chance of snow!  And idyllic scenery- thanks Rosemay!

Weggis by the Lake

Did you ever think you’d get chance to visit Mount Krakatoa?  No- me neither!  Amazing, Noe!

And, just to put you all to shame, here’s my lovely mate, Cathy, in China.  Don’t miss it!

Hope to see you all later in the week.  Have a good one!