Easby Abbey, ghostly in the mist

Easby Abbey seemed to me to be quite at home shrouded in mist.  I’d chosen the riverside walk from Richmond, in Yorkshire, for its Autumn colour and had almost forgotten the sad story of the Drummer Boy.  Legend has it that, towards the end of the 18th century, a tunnel was discovered beneath the keep of Richmond Castle.  The entrance to the tunnel was very narrow, so a small regimental drummer boy was chosen, to squeeze through and investigate.

He was lowered into the tunnel and instructed to beat his drum loudly as he walked.  The soldiers above could follow his progress from the drumbeat. He led them away from the castle and down to the River Swale, in the direction of Easby Abbey.  Half a mile from the Abbey, the drumbeat ceased.  The little drummer was never seen or heard from again!

I think I can probably guarantee to guide us on this walk without disappearing.  Are you game?

From Richmond Market Place, turn north on Frenchgate, and then right, along Station Rd.  Just as you reach the bridge, with The Station on the far shore, you will find a turn off, pointing to Easby Abbey.  The path climbs up from the riverside and will lead you to a junction, where the Drummer Boy stone is placed.

A popular landmark on Frenchgate 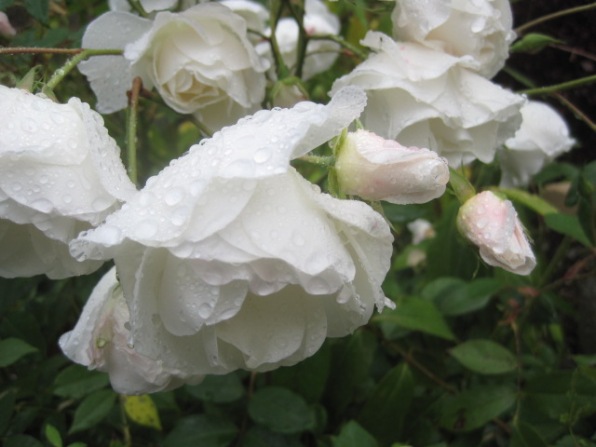 An Autumnal dew bathes the roses 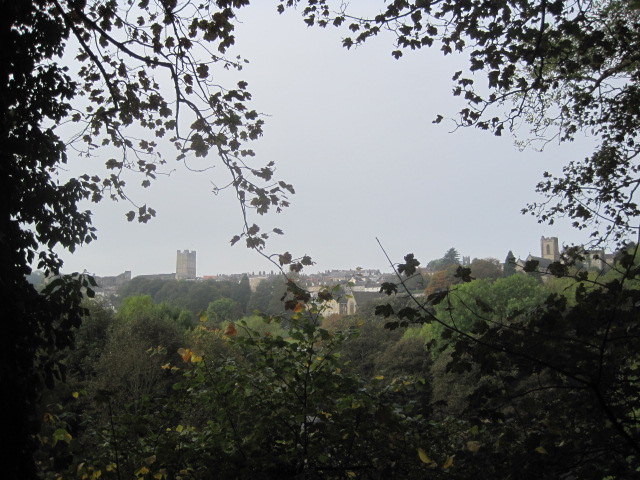 Looking back towards the castle and St. Mary’s Church 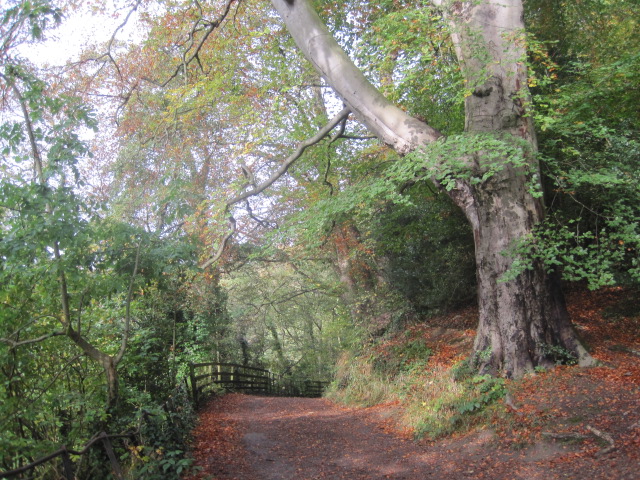 The river chortles along below, tantalising with glimpses through the trees.  Soon you come to a field and across this you have St. Agatha’s House (a private residence) on your left and to your right, Easby Abbey.  The Abbey of St. Agatha, as it is more correctly known, dates from 1152 but has stood abandoned since the Dissolution of the Monasteries in the late 1530s.  The former inhabitants were canons rather than monks, members of the Premonstratensian (or Norbertine) order.  The White Canons, known for the colour of their habit, were Roman Catholics. 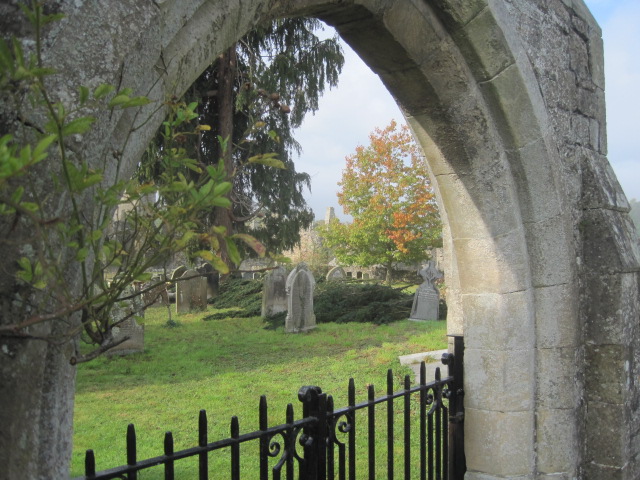 The Abbey from the church grounds

The site is maintained by English Heritage and is free of charge.  I was a little surprised to find the church open and even more surprised at what I found inside.

Beneath the beamed ceiling, light flooded the walls

But the painted arches were unexpected

And the coloured frescoes took me completely by surprise

Lit by the windows

The church is known to pre-date the Abbey and the Medieval wall paintings date from 1250.  It felt well-loved.  In the grounds a small army of men were beavering away, removing overgrown trees.  Retracing my steps through the church gate, I turned my attention to the Abbey.

The gatehouse, just across the lane from the church 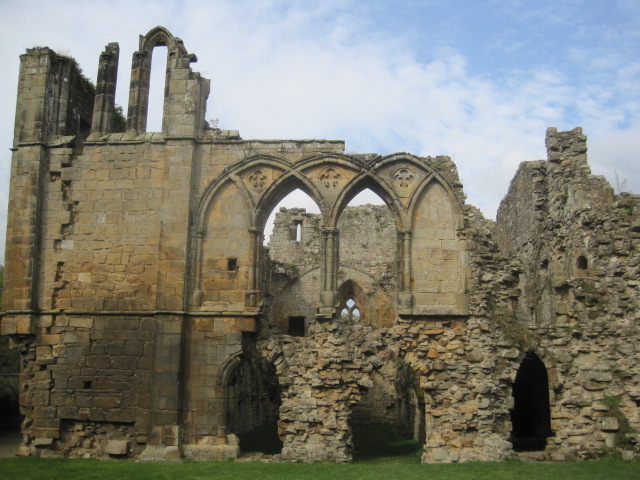 The sturdy lines of the Abbey 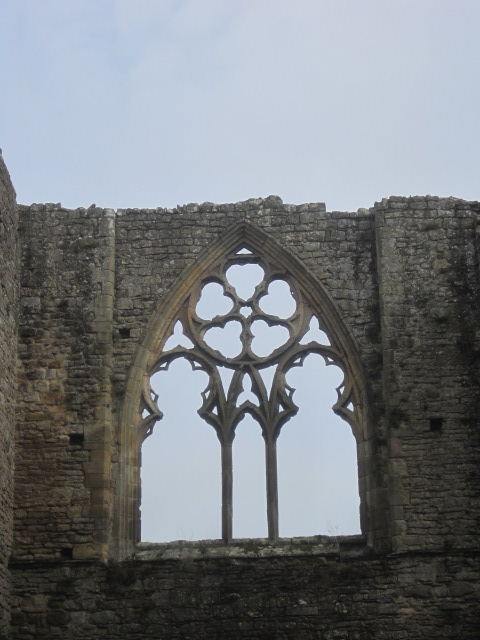 The window of the Refectory

Time to resume our walk.  Turn right at the Abbey gate and follow the lane down.  A gravel path beside the River Swale heads east and after about 300 yards comes to an old iron bridge.  Cross over and take the former railway track, signed ‘Richmond, half a mile’. 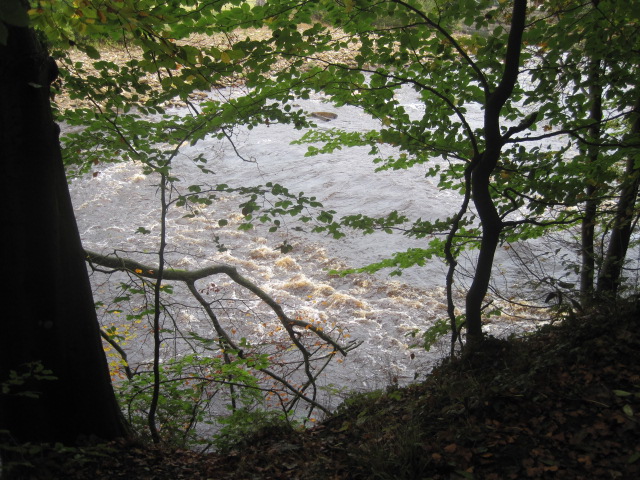 The River Swale chatters along below

Once back at The Station, you can easily retrace your steps, but it seems a shame to me to leave the river when it’s about to reveal its might. How about we pop into The Station for a snack and a look at some art work before we continue?

The ham hock soup was delicious

And I always like a browse at the art

There’s always something that appeals

I’ve written about The Station before.  In fact, I was there on my birthday, 2 years ago.  Seems I have a weakness for this part of the world in the Autumn.  Since I was last there a bakery has opened and the accompanying smells were delicious!  Come on- just ten minutes more.  I promise you, it’s worthwhile.

Cross over the bridge and turn left through a gate.  The path follows the river quite closely or you can get nearer by walking on the grass.  The tree roots are exposed in places so watch your step if you leave the path. 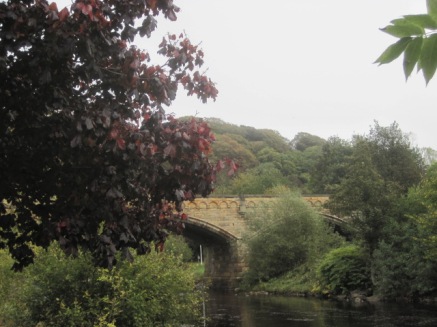 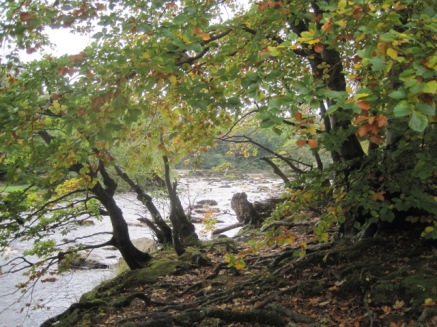 See what I mean about the roots?

Don’t get too close to the river!

Autumn’s carpet is beautiful, isn’t it?

Just about ready to fall

Can you hear a rumbling sound?  You might have caught sight of them through the trees.  The river is very low this year after a dry Summer. 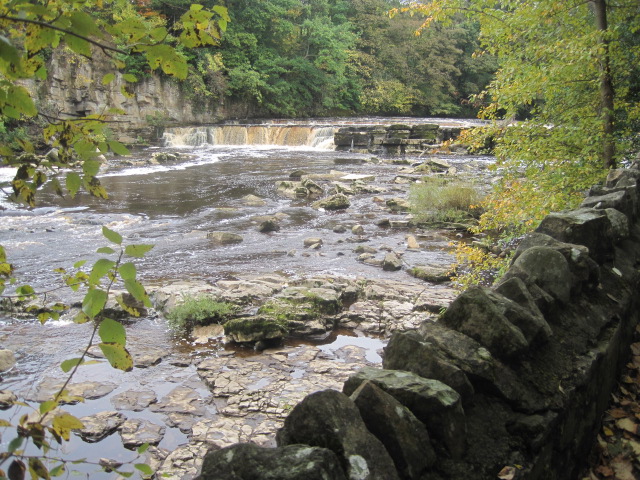 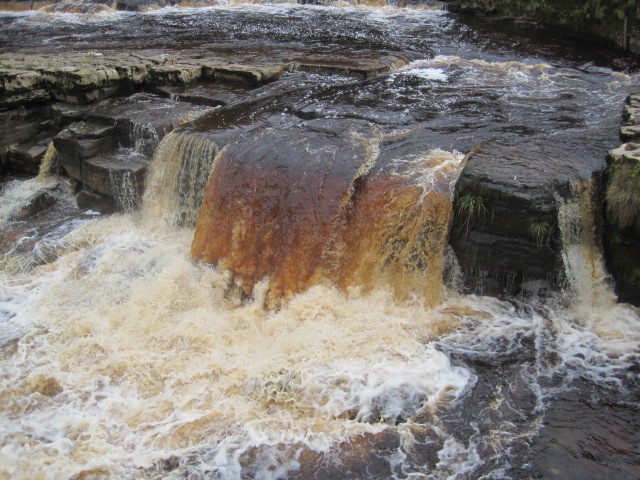 The power of the water is awesome

As always, I find myself entranced

I hope you will agree it was worth another 10 minutes walking?  The hard part lies ahead because the road winds quite steeply back up to the Market Place, passing by the Castle.  The circular walk from the Market Place to Easby Abbey and back is just 3 miles.  Free parking is available at The Station, if you get there early enough. (and it saves you a climb)

And now it’s time to put the kettle on and join my fellow walkers this week.  Click on the logo if you’d like to join in.  You’d be more than welcome and there are always beautiful walks to share. Many thanks to everybody for their kind contributions.  Here we go!

Drake always has the power to fire my imagination  :

Of all the world’s beautiful cathedrals, I didn’t know this one, so thank you, Cardinal  :

And for probably the best deer shot you’ve seen this year!  Amy- you’re a treasure!  :

We’re honoured this week to share a post from Lucy, in a very special place on the Northumbrian coast  :

If it’s scenery you’re after, it’s hard to beat County Tipperary.  Many thanks to Joan for sharing  :

Up in the hills

For the longest time I’ve been following Bespoke Traveller.  Read this post and you’ll see why  :

The long way down in Grand Canyon

If waterfalls and sky walks are your thing, follow Pauline to New South Wales  :

A journey into the dawn of time

If you prefer shopping, Meg has her shopping baskets at the ready  :

That’s it for another week.  I hope you enjoyed reading as much as I enjoyed putting it together. Happy walking!