Now, I know what you’re thinking!  ‘This lady is obsessed with cliff tops and water’.  And you wouldn’t be very far wrong.  After the cliffs at Sagres in the Algarve, and last week’s Seaham walk, it’s becoming a recurring theme.  I do try to vary my walks for you, but I can’t help being just a little biased.

This week we’re going down the North Yorkshire coast to Whitby.  Last time I took you there we went window shopping.  It’s a small town that has something for everyone, but my favourite part is unquestionably up on the cliff, looking down.  First we have to get up there.  We’ll tackle the steps pretty soon, to get them out of the way.  Your reward can be fish and chips afterwards. Agreed?

The car park is right next to the marina- a good place to start!

I love the eye-catching colours of the boats

And today there’s a treat! The swing bridge is opening.

In all my years, I have rarely seen this sight in the bustling little port.  A crowd gathers to watch the sailboat go by, and as the gates swing shut again, a queue forms to cross over the bridge.  A delightful party of small schoolchildren with cheery blazers were being corralled by their teachers. I’d have loved a shot but they were too fidgety!  Over we go, to be met by a confusion of signs. 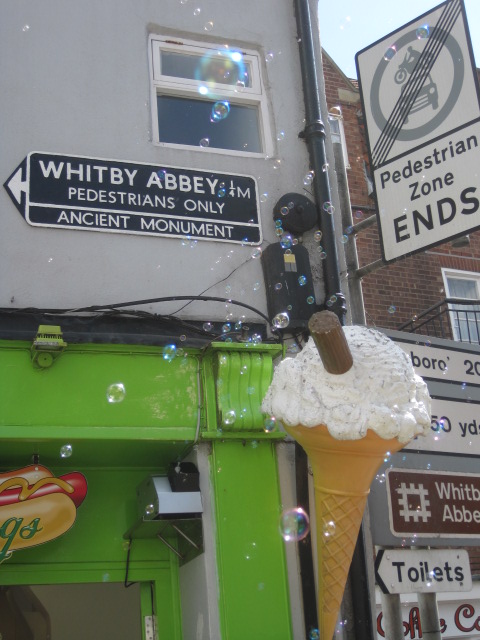 I thought these bubbles were with the schoolchildren, but apparently not!

But don’t worry! You can keep stopping to admire the view.

It’s lovely in either direction

Here’s an interesting place to live!  Next to Caedmon’s Trod

And at the top, St. Mary’s Church quietly waits

Whitby has been welcoming visitors for a long time.  The earliest record of a permanent settlement is 656AD, when an abbey was founded on the East Cliff by Oswy, the Christian king of Northumbria.  Viking raiders destroyed the monastery that followed, and for 200 years the site lay desolate, until after the Norman Conquest of 1066.  The area was then granted to William de Percy who, in 1078, donated land upon which was constructed a Benedictine Monastery, St. Mary’s Church and the town and port of Whitby.

The name Whitby comes from Old Norse, meaning ‘White Settlement’.  It was here, in Whitby Abbey, that the earliest recognised English poet, Caedmon, a former cowherd, lived and worked. The town has a strong literary history and famously features in Bram Stoker’s Dracula.

Set on the River Esk, Whitby has a sheltered harbour, and in the 18th century the port was a thriving centre for shipbuilding, whaling and the transport of locally mined alum and jet.  The jet became very fashionable when Queen Victoria adopted it for her mourning jewellery on the death of Prince Albert.  Whitby jet shops still feature prominently in the cobbled streets today. 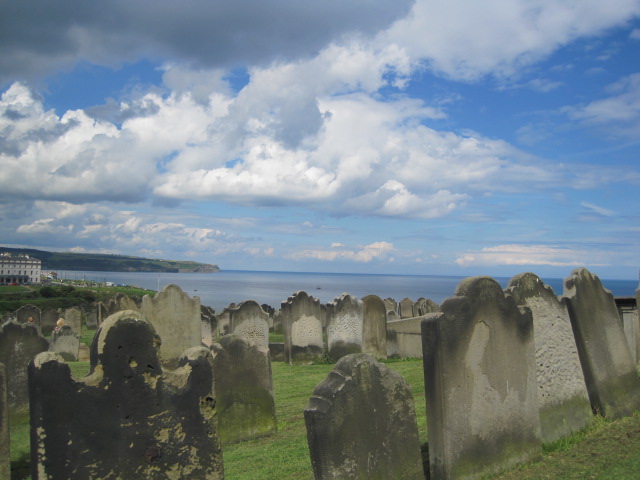 The clouds are gathering, so it’s time to move on 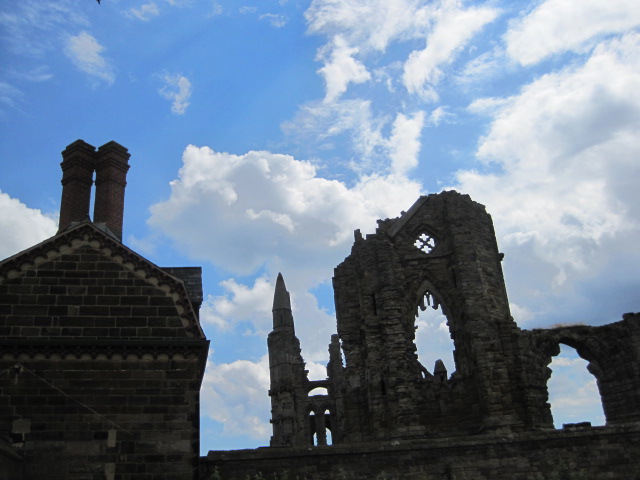 Pass by the entrance to the Abbey ruins

And out on the cliff top, look back at Whitby Abbey and the pier 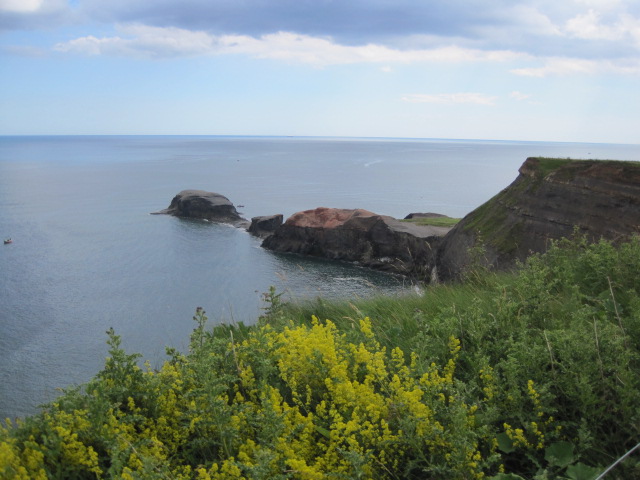 And beyond that, Whitby Holiday Park, balanced precariously on the cliffs

At this point you can turn inland and follow a path back to the coast road, but I wanted to see more.  We are only 1 mile out of Whitby, and 5 miles further down the coast is idyllic Robin Hood’s Bay.  I continue on, along the Cleveland Way. 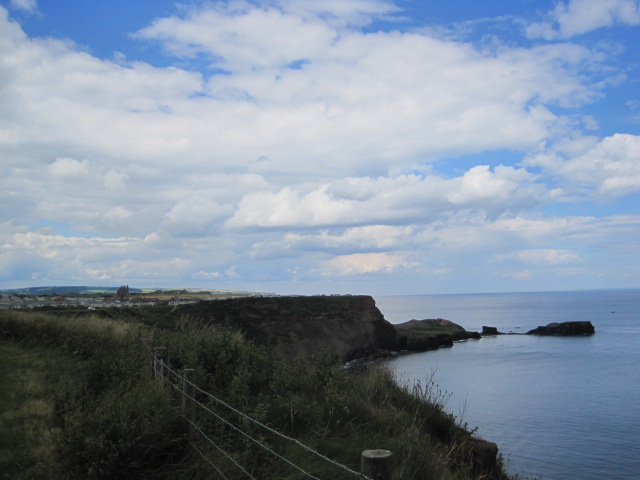 Whitby is still visible in the distance

And below, the glistening bay

Another treat awaits – a lighthouse and a fog-horn station!

‘Hornblower Lodge’ is now a holiday cottage, but was formerly a fog-horn station, fondly known as the Whitby Bull.  The original horn was switched off in 1987 but before that it worked in conjunction with Whitby High Light.  The lighthouse is only 13 metres high but is positioned on the cliff top, 73 metres above high water level, with a range of 18 nautical miles.

The lighthouse also has holiday cottages to let, details included in the link. 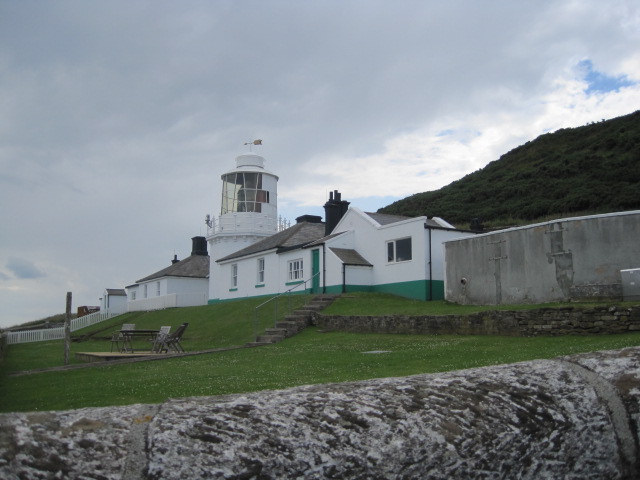 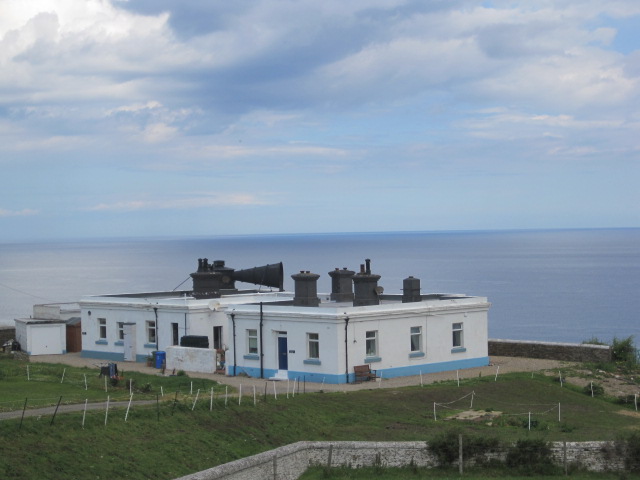 Or how about ‘Hornblower Cottage’?

A lane heads inland from the cottage, taking you past farmland, and soon you are back on the coastal road.  You can follow this all the way back to Whitby and visit the Abbey, if you like.  It’s well worth a visit, and there is a restaurant on site.  Or you can save the visit for another day and take the footpath to your left, just past the Holiday Park sign.  This will bring you back into Whitby, threading your way down through the houses to end up almost opposite your start point.

Heading back to Whitby 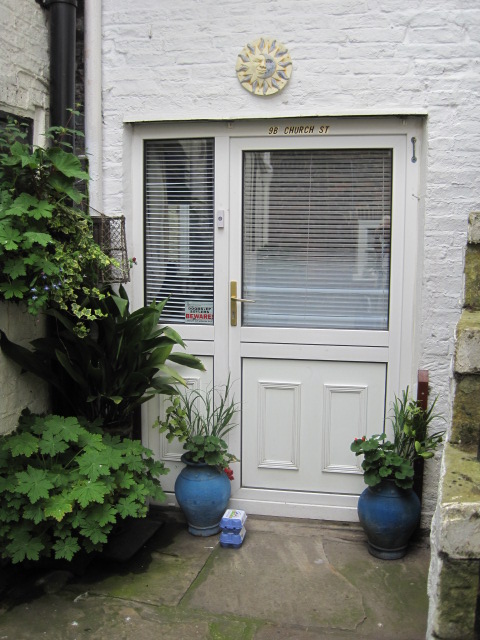 Down the steps, and past the houses 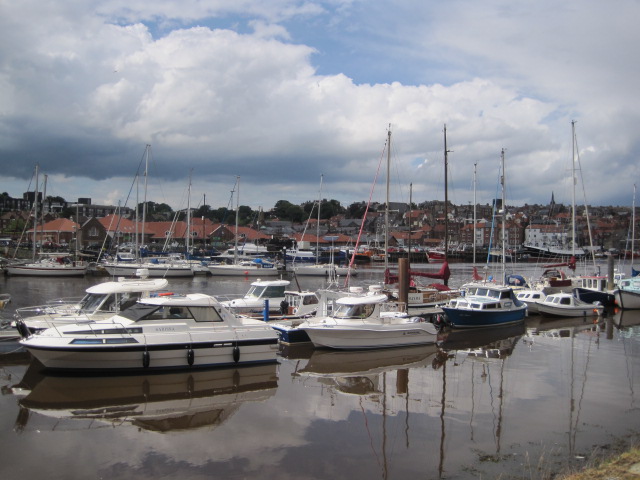 Till you’re back at our start point, by the harbour 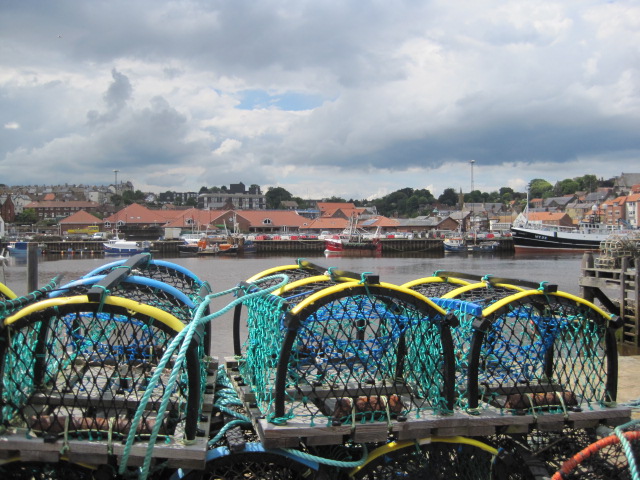 These are the newest lobster pots I have ever seen!

Speaking of lobster, I seem to remember we had an agreement?  Whitby is full of fish and chip shops but ‘Hadleys’ is a favourite of mine.  Always busy, I don’t know how the girls stay so cheerful.  You’ll find it on the corner, just over the swing bridge and before the Whitby steps.

A little expensive, but very good 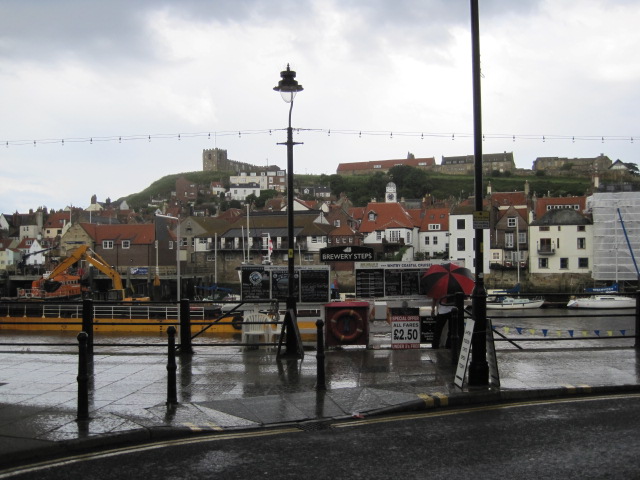 Just one last photo, for Jill, who thinks my skies are always blue!

The downpour drove me inside the excellent Tourist Information Centre, right by the car park, but it didn’t last for long.  Or I could have gone shopping for Whitby jet. 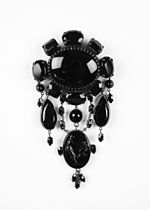 What do you think?

My walk is about 6 miles in total, or the shorter version 4 and a half.  I hope you enjoyed it.  If you don’t drive, Whitby is easily accessible by rail from Middlesbrough.  This link will give you lots more information about the area, to encourage you to visit.

I’m so lucky this week!  Meg has agreed to be my tour guide to the Wilanow Palace in Warsaw  :

And she doesn’t mind a spot of rain, either  :

Drake introduced me to Svendborg in Denmark.  What a beauty!  :

Sylvia is running out of time for her beach walks, but don’t be sad!  :

And I got deluged at the falls with Amy- and loved it!  :

Pauline (you know her as Pommepal) has sent me a post all the way from Canberra, down under  :

And I thought I’d just update you on Elaine  :

That’s quite a lot of reading for you so you’ll need a cuppa (or two!).  I promise to find you a flat walk for next week.  If you’d like to join me, just click on the logo for details.