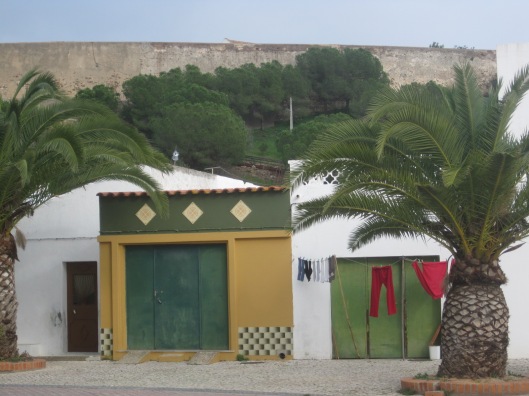 It’s an odd thing!  Castro Marim is one of the most peaceful spots I’ve ever come across.  Yet standing there, glowering, at the top of the hill, is a monumental castle.  Part of the ramparts that once surrounded the town provide wonderful contrast in the domestic scene above.

Looking out from the battlements across the broad sweep of estuary, the town of Ayamonte, on the Spanish side of the River Guadiana, looks like many another.  But as your eyes travel along the shore, you might spot the fortifications at the top of the town.  This is the pattern all along this river, a natural boundary between Portugal and Spain. Like pugilists, ready to punch and counter punch, these two nations have squared up to each other down the years.  But today, thankfully, all is peace. 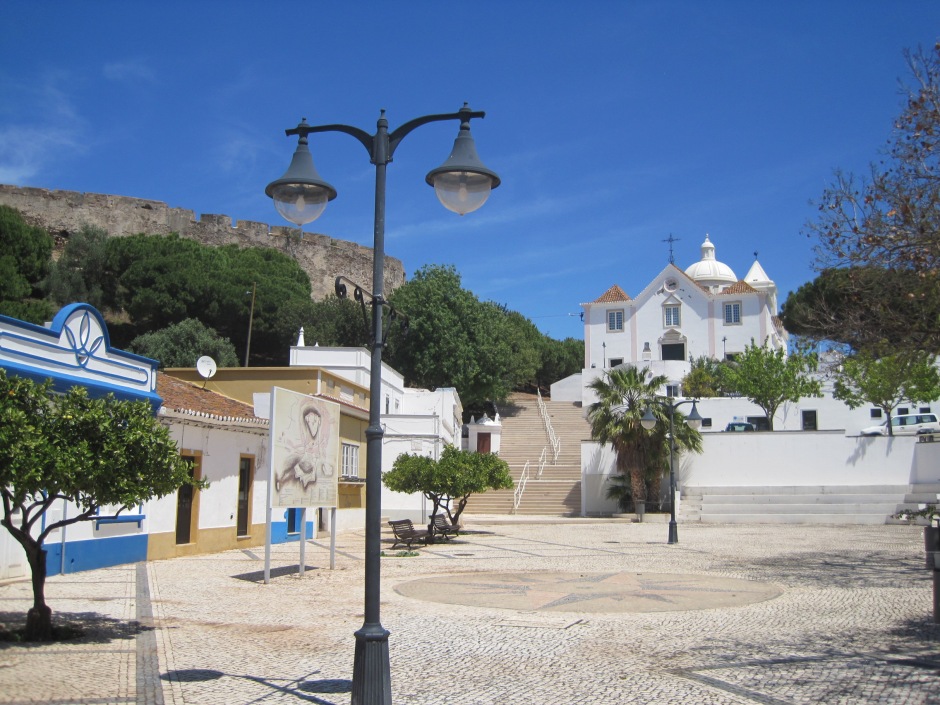 The castle walls and main church of Castro Marim

Castro Marim is a sleepy place, with one ancient street that straggles up towards the castle.  The nature of the shoreline and the shifting sands of the Algarve has much to do with this.  The first settlement here was back in the Neolithic period when Castro Marim was much closer to the sea than it is now, and surrounded by shallow waters.  For thousands of years Castro Marim was a port that offered shelter to the ships that sailed up the Guadiana to collect copper from inland mines. Romans and Phoenicians settled here and such was its prosperity that Castro Marim was connected to Lisbon by a Roman road.

The castle and fortified wall that surrounded the medieval town date from the 12th century, when border disputes had become commonplace. Castro Marim subsequently became the headquarters of the Order of Christ, but went into decline when these were transferred  to Tomar in Central Portugal.  The castle fell into disrepair and was replaced by the fort of São Sebastião on a hilltop on the opposite side of town.   The shifting sands did little to help the economy.

Today tourism has found Castro Marim in a small way.  New housing surrounds the old town.  The Architectural Museum in the partly restored castle tells of a fascinating past.  But essentially the town is as self contained as ever, only rousing from its slumber each August for the Medieval Fair. 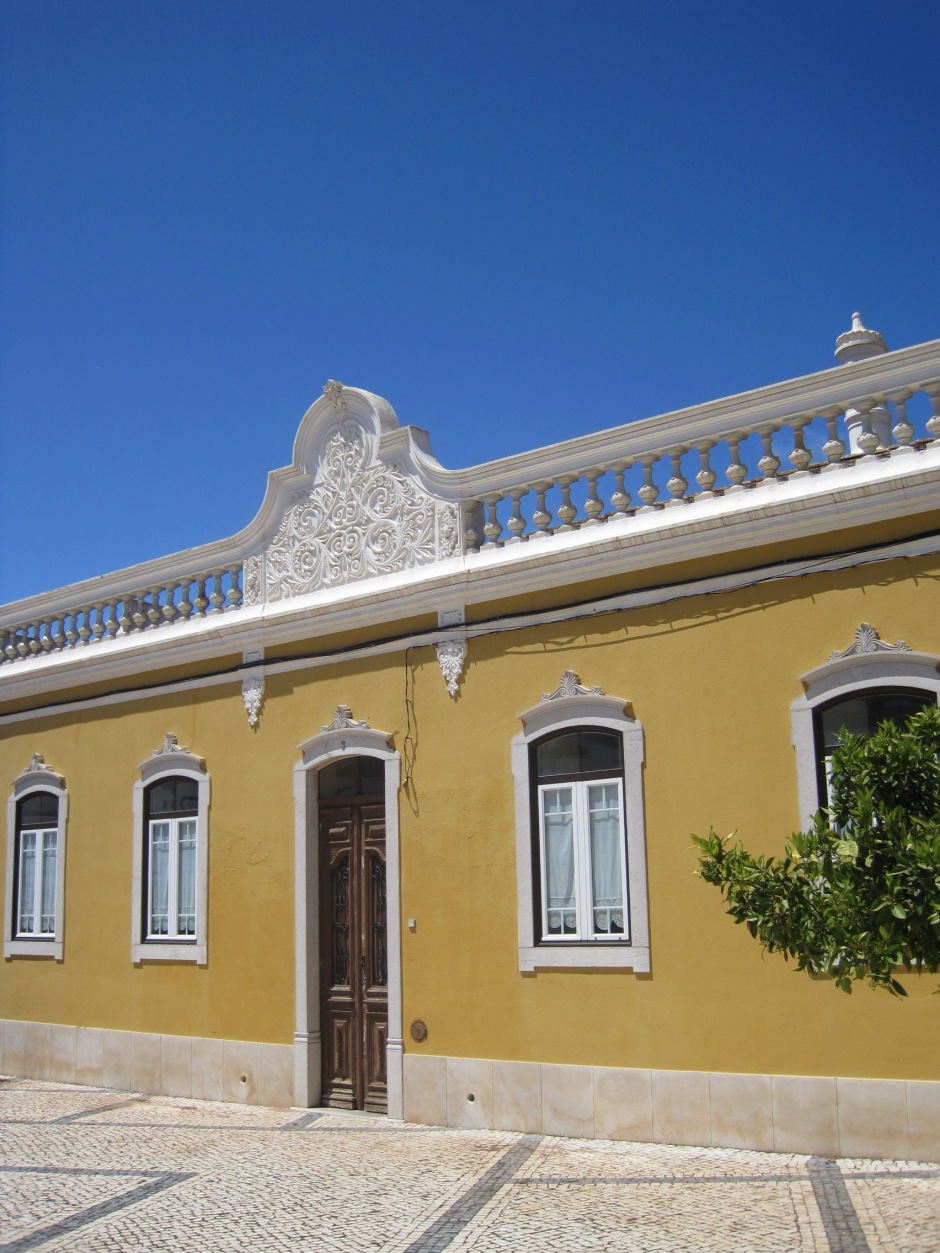 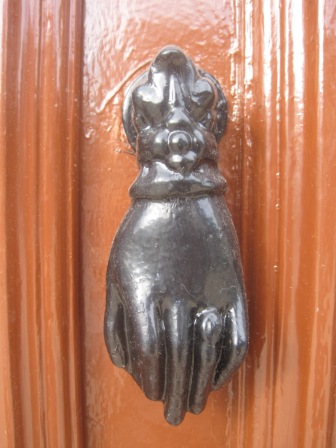 With its “hand of Fatima” door handle. 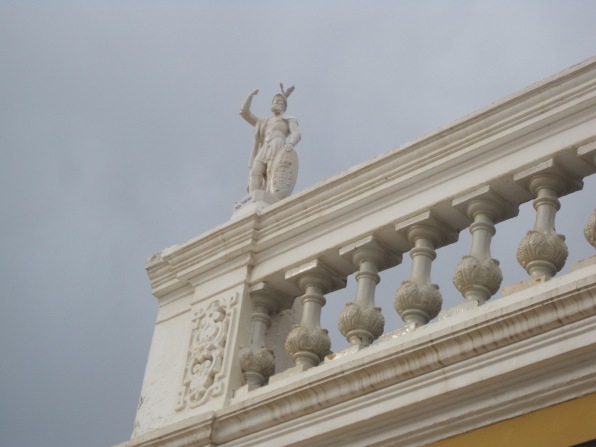 And a quite unusual roof terrace. 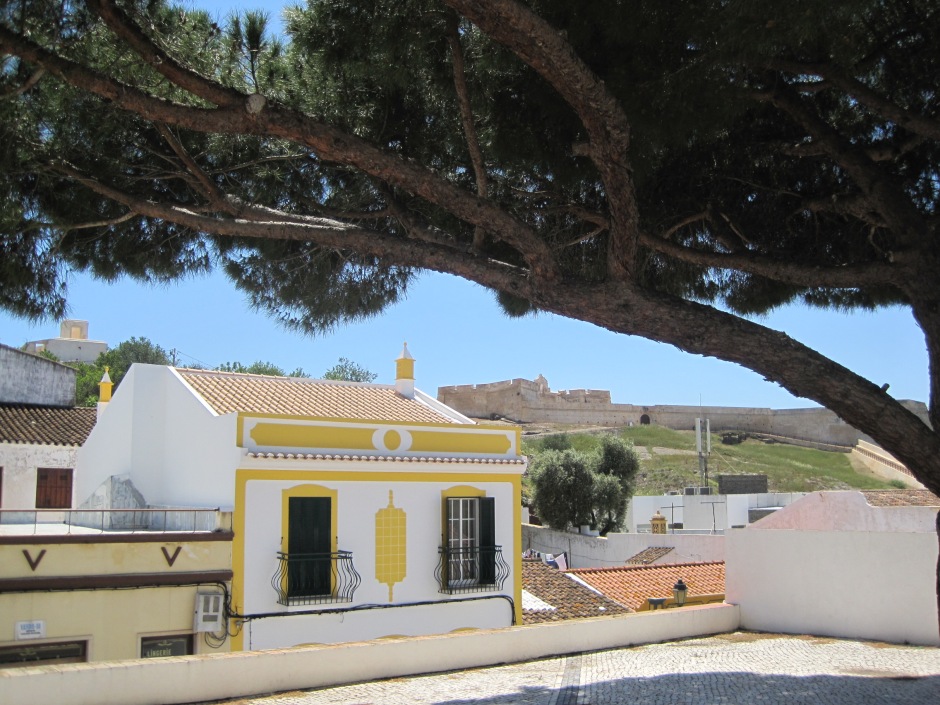 Looking across the rooftops to the town wall 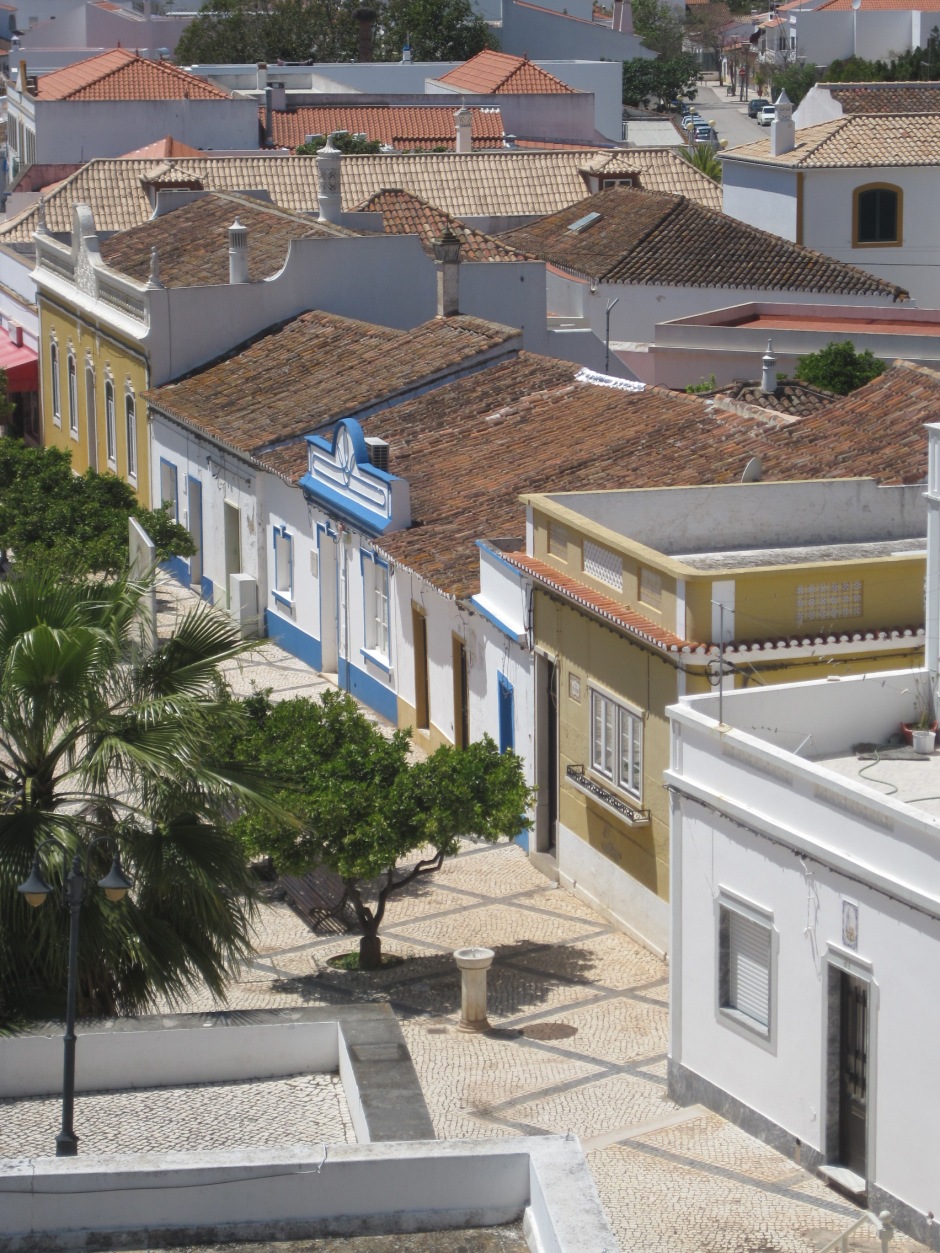 And down from the church steps 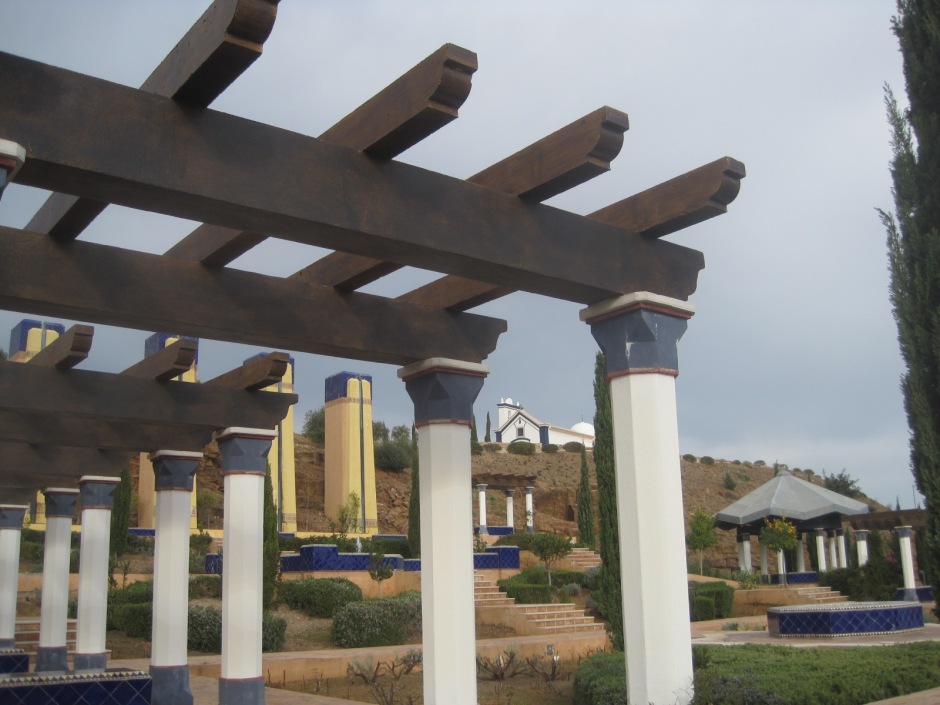 Gardens in the newer part of town, and the Chapel of S. Antonio 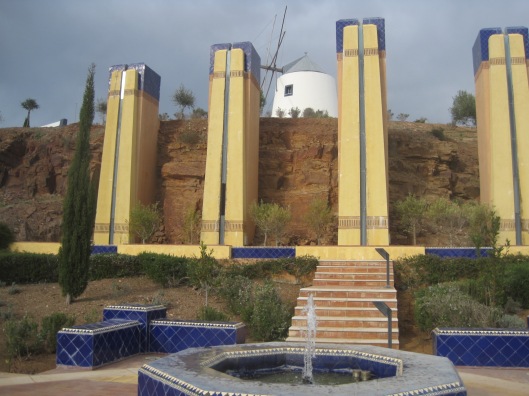 You may remember that I mentioned Castro Marim in A gift from the sea.  You can gaze down on the salt pans of the nature reserve from the castle walls. And if you’re really lucky, you might catch a sight of the flamingos, stretching their wings in flight.  For a better chance of seeing them, try my walk through the salt marshes. 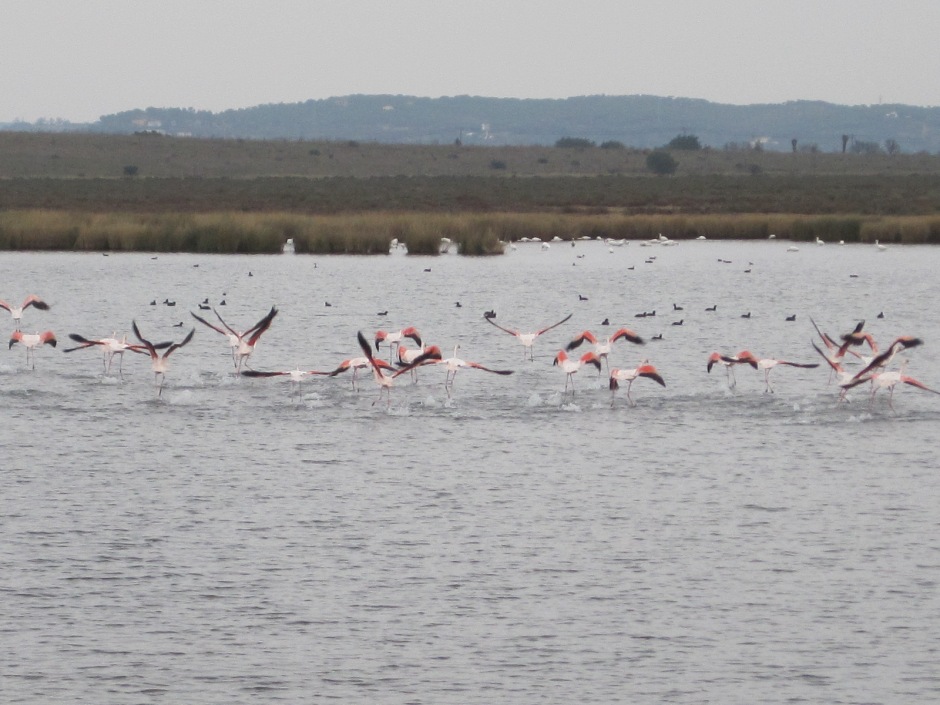 Flamingos on the salt pans (courtesy of Mike Bradley)

Where to next?  Maybe a tidal mill, or we could hop across the border.  Or even join the smart set at Vale de Lobo.  But not for golf.  Come along and see.