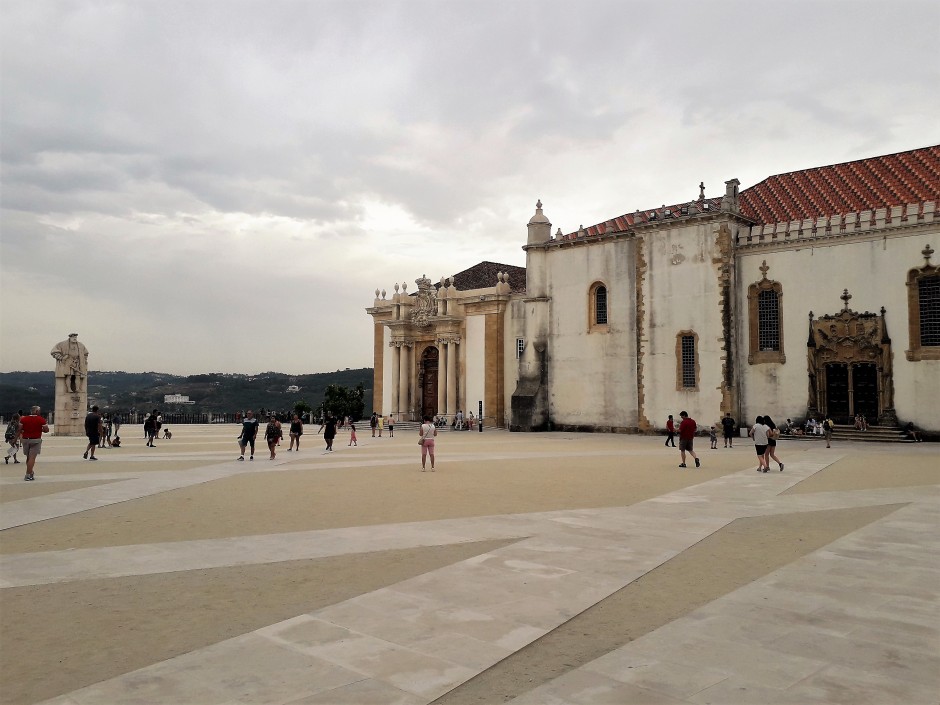 Central to the University of Coimbra lies a vast square, looking down from which you have the city at your feet.  To reach it you have a steady climb, up through winding streets.  On a fine day, a magnificent view will be your reward.  Sadly, our skies were grey and misted with a fine drizzle, but we were celebrating a birthday and determined to enjoy it.  A 45 minute train ride had brought us here, from Aveiro, out on the coast.

In Roman times Coimbra was known as Aeminium.  An aqueduct and traces of mosaic discovered in this area date back 2,000 years.  The first Muslim occupation of the Iberian peninsula took place between 711 and 715, and Coimbra surrendered in 714.  Many of the street names survive from that period, and the alcáçova, or fortified palace, where the governor of the city lived, formed the basis of the Royal Palace of the first kings of Portugal.  During this time the high part of town was walled and fortified.  Coimbra was reconquered by the Christians permanently in 1064, becoming the capital of the first Portuguese dynasty, in the ever complicated history of this country, in 1131.  It remained so until 1255, when the seat of power was transferred to Lisbon. 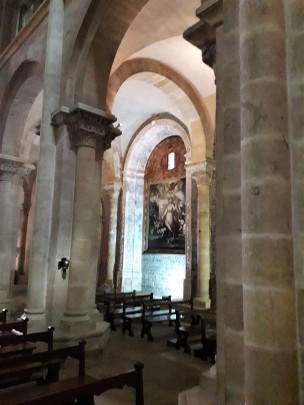 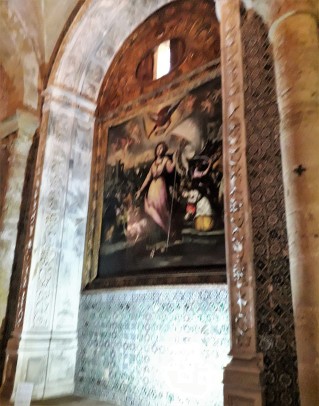 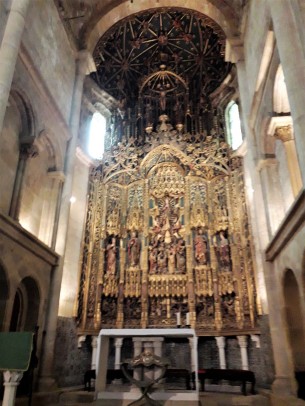 It was almost by chance that we came upon the Sé, or Old Cathedral, in Largo da Sé Velha.  Built in the Romanesque style, on the site of a temple dedicated to Santa Maria, from the outside the cathedral resembles a small fortress.  Steep steps lead to the main portal, beyond which a hush descends.  My eyes alighted on huge seashells, the like of which I had never seen.  Labels proclaim them Tridacma shells, from the Indian Ocean.  The alcoves on either side of the nave feature compelling spotlit portraits, while the walls gleam with 16th century edged Múdejar tiles from Seville. 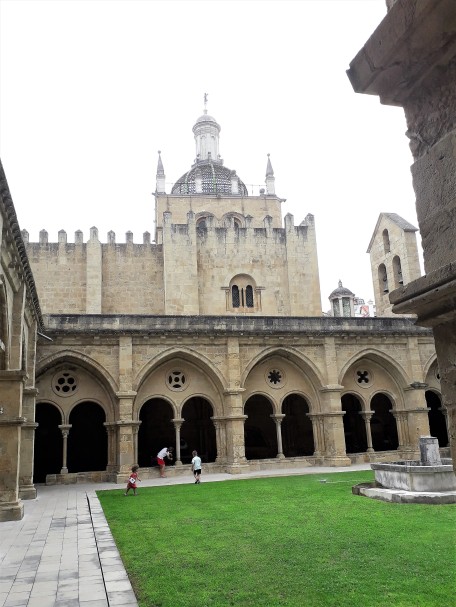 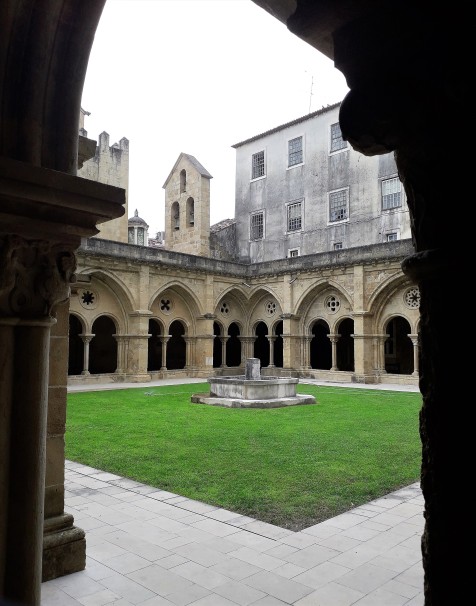 The Gothic cloister, begun around 1218, is the oldest in Portugal.  Unintentionally it’s a green space for small children at play.  Leaving the cathedral, it’s an upwards slog to the University complex.  Robed nuns paid us scant attention, going  about their business within the solid walls. 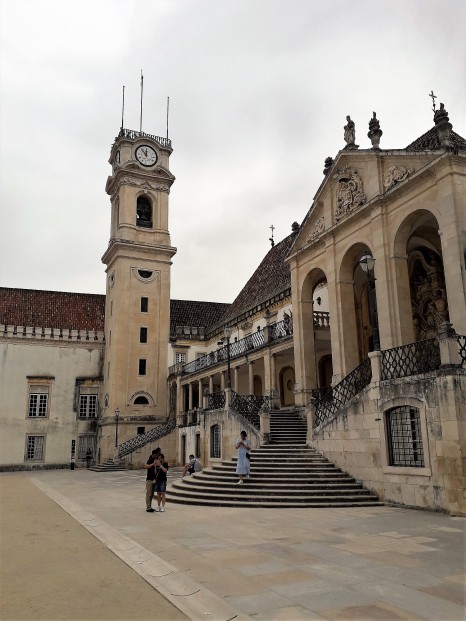 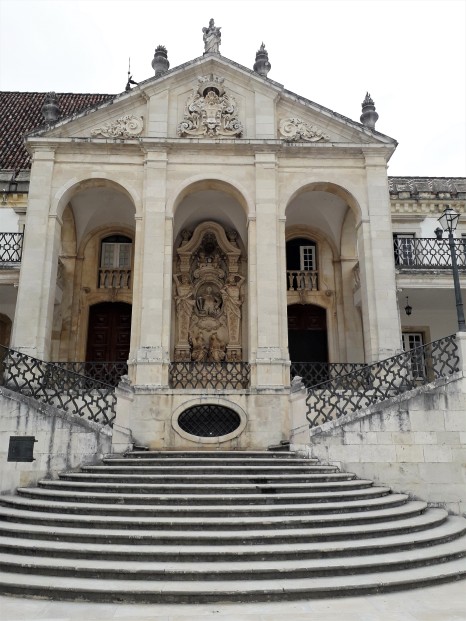 If I knew anything at all about Coimbra it was that the University was beautiful, and had been designated a UNESCO World Heritage site in 2013.  Founded in Lisbon by King Dinis, in 1290, it alternated between the two cities till it was definitively established in Coimbra in 1537.  It is one of the oldest in Europe, and was the only one in the Portuguese-speaking world until 1911.  The life of the city revolves around the state-run university. 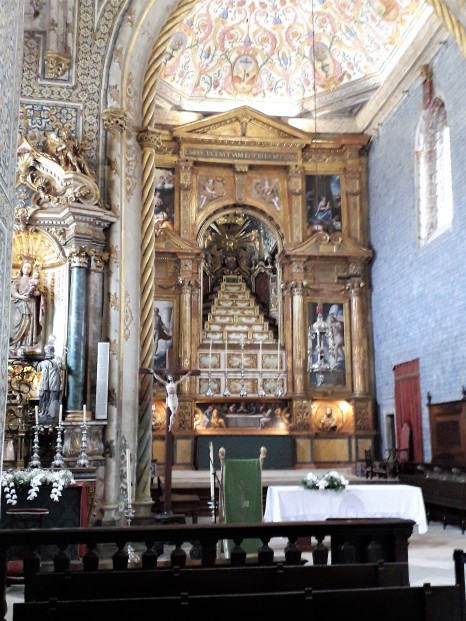 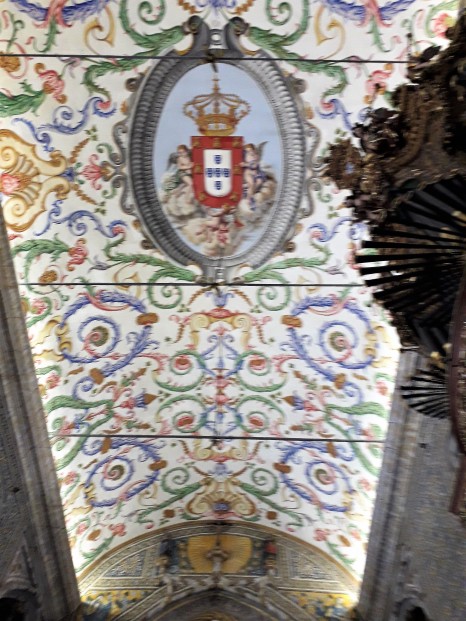 We purchased a composite ticket for the Palace and the Joanine Library.  The latter had to be viewed on a specific time slot so we headed first to St. Michael’s Chapel, where we gaped upwards at the painted, arched ceiling and astounding baroque organ.  Just time for a coffee before descending the Minerva stairs to patiently await our turn.

Finally we were shepherded into cool chambers with dense walls and arched ceilings, not quite sure at what tomes we were looking.  This was just a preliminary.  The gasps came later.  With over 200,000 books, mostly in Latin and pre-18th century, the Joanine Library (named for King Joáo V) is recognised as the most sumptuous university library ever made.  The 72 shelves, arranged over 2 floors in 3 rooms, are minutely decorated with Chinese motives.  I had thought the library in Trinity College, Dublin amazing, but this one defied description.  Nor were we allowed to take photos, conservation being necessarily important.  The books have an unusual ally- a colony of bats who entertain themselves at night by feasting on wayward insects.  This was one of those occasions when I was glad I’d purchased a full colour souvenir brochure.  As I explained last week, I’ve lost all except one of my photos from this visit to Coimbra.  I’ve used my husband’s photos throughout this post, but I managed to find a video to give you a brief glimpse inside the library.  It barely does it justice.

Still awed at what we’d seen, we continued around the Palace and out onto the balcony for misty views down to the river.  During the Middle Ages Coimbra was divided into an upper city, where the clergy and aristocracy lived, and a lower city for merchants, artisans and labourers, down beside the River Mondego.  Since 1772, the Botanical Garden has wrapped a green cloak around the skirts of the city, combining the beauty of nature with education and research. 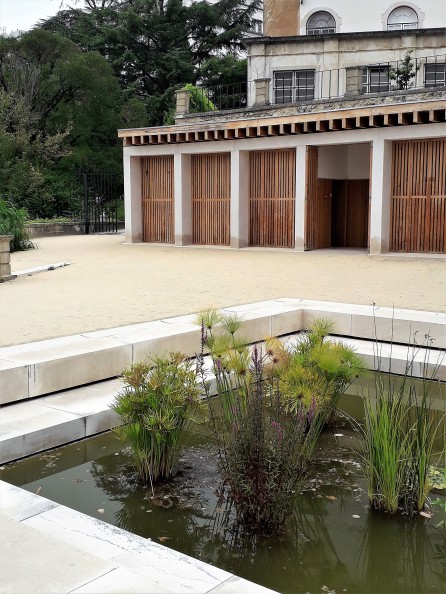 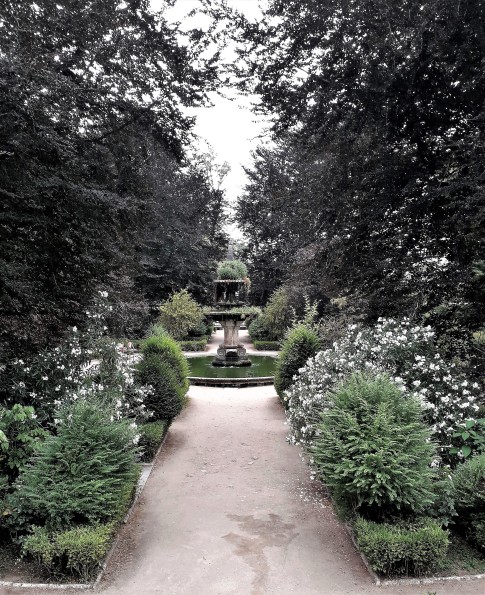 A cobbled path leads from the rear of the gardens down to the riverside, where fountains play majestically across the water, reminding me of Geneva.  A footbridge spans the river, and playing fields line its banks.  We crossed to the far shore to look back at the city, before returning to the station.  Take a more comprehensive look at Coimbra, with Julie Dawn Fox.  She lives not far away, and has many suggestions for walking throughout Portugal, too.  And incidentally, if you can’t face the climb, there is a bus that will take you up to the University grounds.

Not so many walks this week.  People are busy with Christmas preparations.  I hope to have another Jo’s Monday walk next week but I’ll understand if you can’t join me.  Even though I promise to bring cake!

Janet made me smile with this title and I’ve been singing it ever since!

Drake always makes me smile!  You will love this burst of heat and colour :

Much more subtle colour from Georgina, tempting me across the border into Spain :

Autumn Walks in the Sierra Aracena

A nice bit of variety, and some daily exercise, with Yvette :

And a truly beautiful bit of night photography from Becky :

Christmas at the Botanics

While Cathy finally completes her journey :

Wishing you all a great week!  We have a rainy forecast here so there will be some delighted skipping in puddles.