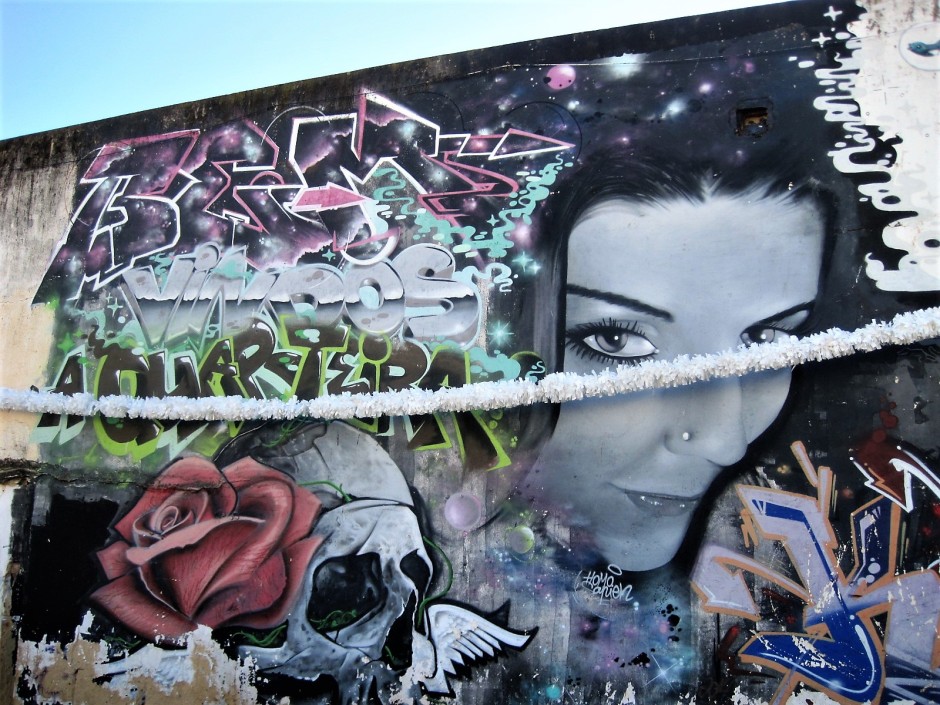 Why is it that whenever I suggest an outing to an event, my husband looks at me with some scepticism?  Granted, we have struggled sometimes to be in the right place at the right time, but we usually do get there in the end.  So it was with the Blessing of the Fishermen, in Quarteira this month. 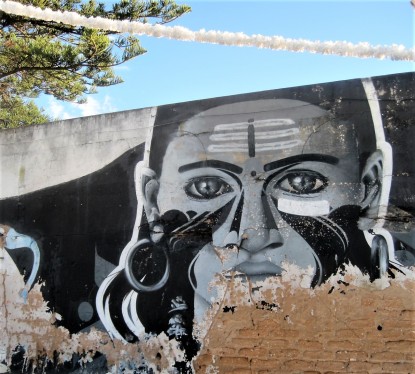 I’d be the first to suggest that Quarteira isn’t everyone’s cup of tea, but there are some occasions you shouldn’t miss, if you can help it.  Nossa Senhora da Conçeição is the patron saint of fishermen and of Portugal.  Every year on 8th December an image of the saint is carried to the harbour for a blessing of the fleet.  I had read that this took place at 3pm.  Thinking to have a bit of a stroll first, we arrived soon after midday.  All was quiet, but as we approached the harbour I was excited to see that the boats were all decked out in their finery.  Blue and white bunting fluttered in the air, colours considered lucky by the fishermen. 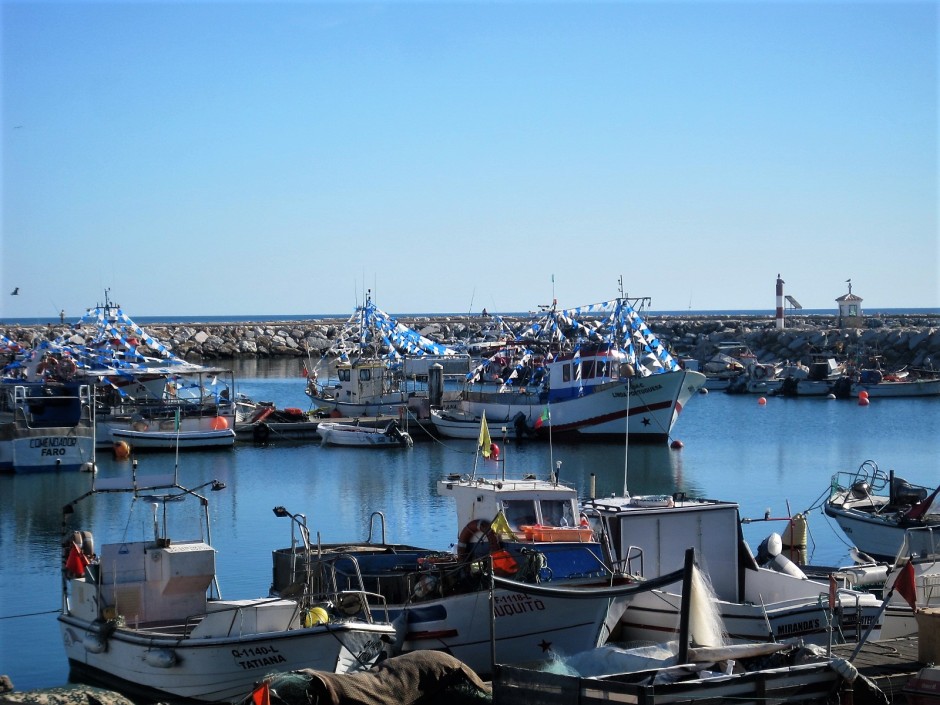 Access to the harbour was restricted to fishermen and their families, but you could walk right out along the molho, the sea wall enclosing them.  Music and laughter drifted from many of the vessels.  A black cat looked on disdainfully, just one of many opportunists.  At the end of the molho, a shrine dedicated to Our Lady. 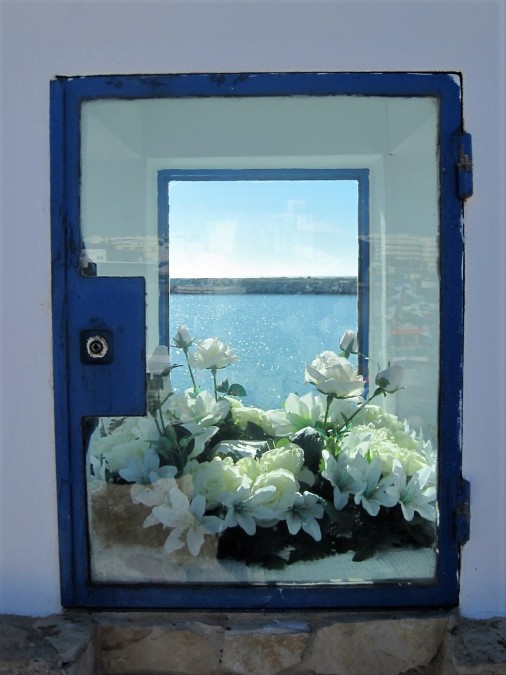 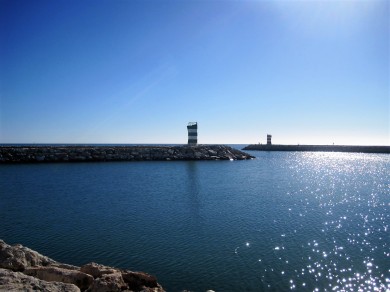 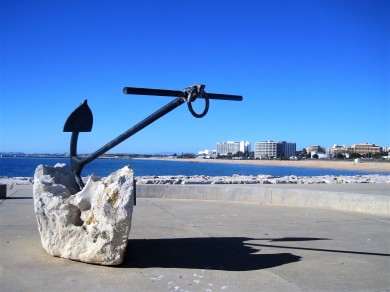 A blessing did not look imminent, so we retraced our steps past the compelling street art and into the older part of town, hoping to find a church.  A red carpet seemed like an invitation, but turned out to be a herring of the same colour.  Dilapidation mingles with the mundane in Quarteira. 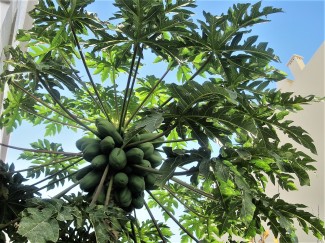 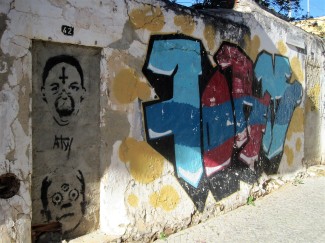 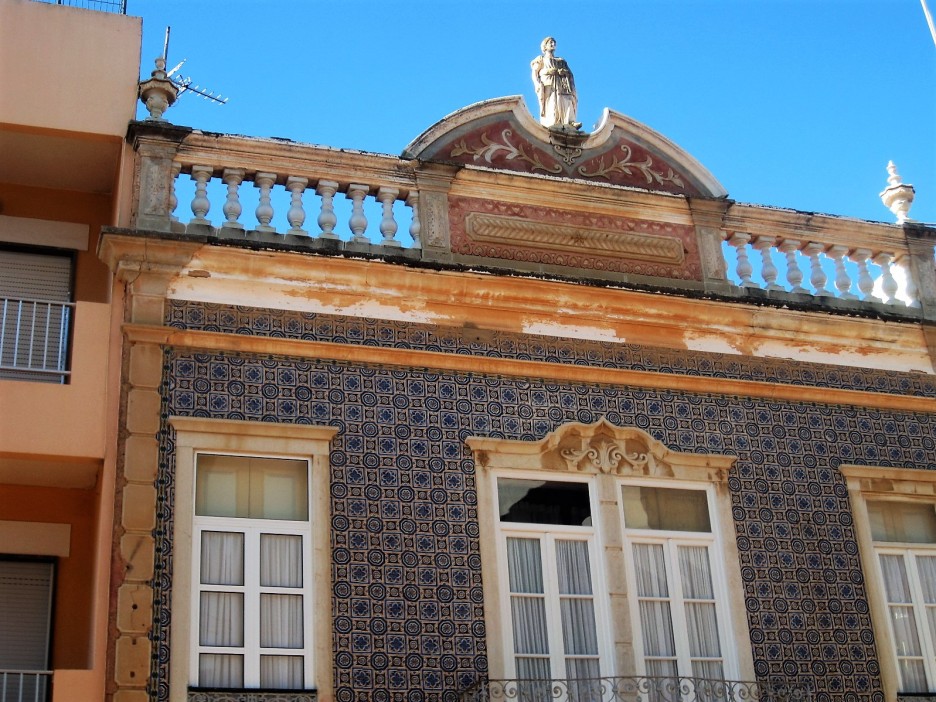 Back on the lengthy promenade, it was time for a drink.  I won’t show you the enormous piece of chocolate cake my husband managed to consume, without any help, I hasten to add.  I had seated myself next to an elderly gentleman, gazing out to sea.  Waiting for the action to transpire, we had soon exchanged histories.  He was from Lisbon, visiting his daughter and keen to see this event for the first time.  Gradually people were assembling, small groups chatting and families with children, weaving in and out on scooters and skates.  On the beach, a few sun worshippers appeared oblivious, but most kept an eye on the sea.

Sure enough, at 15.00 the fleet began to leave the harbour, tooting horns and shooting flares high into the cloudless blue sky.  Excitement rippled through the spectators.  The shorter arm of the seawall made a good vantage point, and I munched on roast chestnuts as I watched and waited.  Finally all the boats were lined up.  More flares ripped through the air, and they were off, racing back to shore. 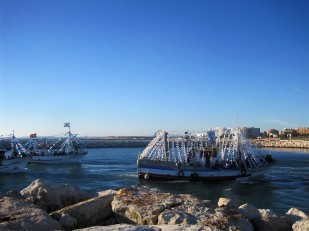 Boats from all across the Algarve had come to join in the celebration.  We waited until all had returned to harbour, uncertain of what, if anything, came next.  And, just as we’d decided to call it a day, around the corner came the procession, led by a slow marching band, the Senhora held aloft. 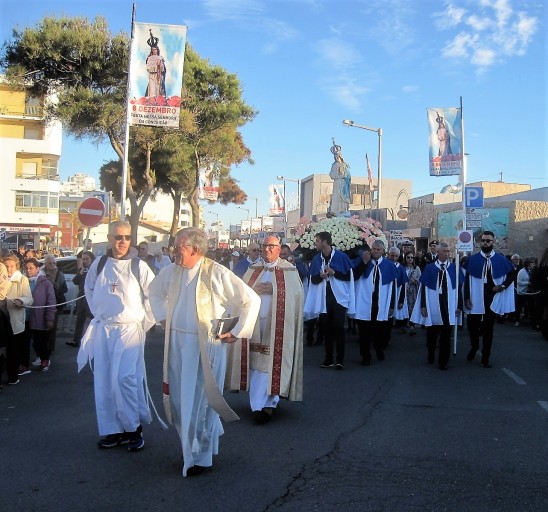 We realised that the procession had made its way along the promenade, while the boats paid their tributes out at sea.  We were swept along with the crowd for a while, turning back at the busy harbour, where the priest would be waiting to give his blessing.  An afternoon to remember.

I hope you enjoyed sharing this with me.  It was such a joyful, warm atmosphere.  Advent here in the Algarve is lovely.  I won’t be sharing a walk next Monday as it’s Christmas Eve and you might well have other things to do.  I will be stopping by with good wishes for the festive season before then but, in case I miss you, have a blessed and peaceful Christmas.  Meantime, my thanks to everyone for your company.  Let’s share some walks!

A Little Farther Into the Woods

Alice stays close to home for this week’s walk :

But Jackie’s still in Spain.  I would have loved to visit Monserrat :

Why not let Geoff show you a few scores?

Yay!  ‘Tis the season, and where better to view it?

Walking in a Victoria Wonderland

Drake shares the love of his life.  From an angle you might not have seen her!

Down on the corner

Come and listen to the birds in Denzil’s homeland.  He’s always full of good, practical advice :

Walking around De Maten in Limburg

I don’t think Cathy will ever run out of beautiful walks to share!

On Mondays there are always murals over at Sami’s Colourful World.  Pop along and see, if you haven’t already.  Don’t be too busy to enjoy life this week.  Christmas will be here and gone before you know it.