Last week I guess I cheated a little on my walk in Kraków. There was a bit too much sitting about at the riverside, but it was a very warm day so I make no apologies.  I knew I’d be making up for it.  ‘Obiad’ was rather special, with a big family gathering for my last night, and all was peaceful in the house next morning.  Time to slip away, and savour my last few hours in the city.

I was warned that ‘Saturday service’ on transport would be different, but I was lucky and bus 178 sped me into town.  Rattling over Most Jozefa Pilsudskiego, I spotted my bridge with the intriguing sculptures in the distance and hopped off.  Walking back on ul. Krakowska, I noticed a plaque commemorating Jan Pawel Drugie, Pope John Paul II.  I hesitated there on the pavement, thoughts of Dad suddenly filling my head.  Pushing open the heavy wooden door, I slipped inside the church to light a candle.  Without him, I never would have been here in Kraków.

Out again, into warm and hazy sunshine, it was on with my quest.  Pausing to look at the map on the bridge Jozefa Pilsudskiego, I was more taken with details of how the city once looked than in absorbing my whereabouts.  A common fault of mine.  I have a hopeless track record on following maps.  Fortunately I’m much better at finding beautiful bridges. 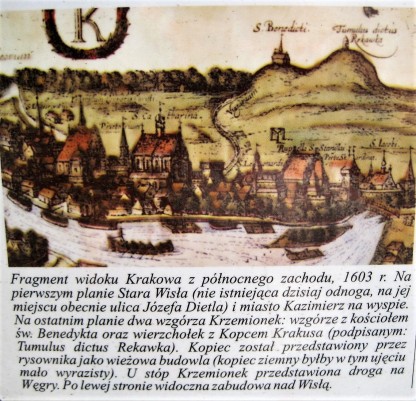 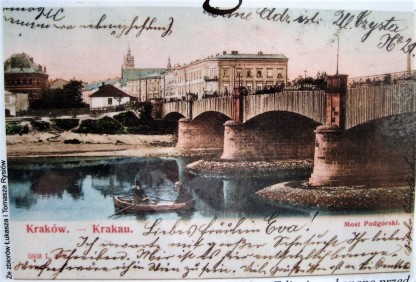 This one, ‘Between the water and the sky’, had called to me since first I saw it.  I was mesmerised.  You do, however, have to beware of cyclists. 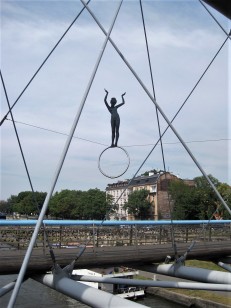 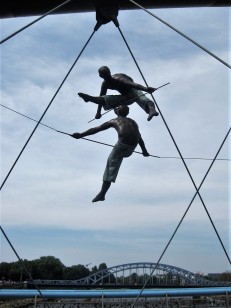 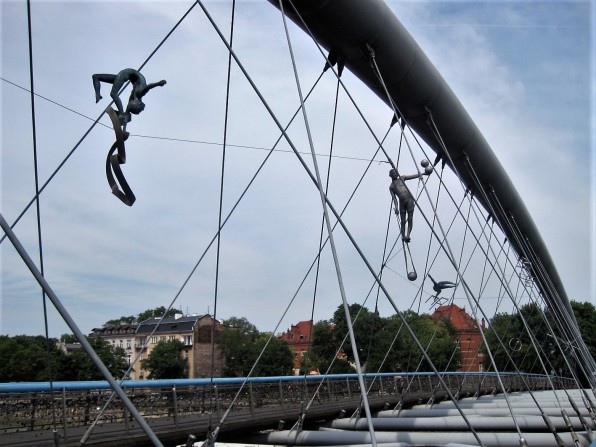 I got ‘honked’ at as I daydreamed beneath the sculptures.  Apparently it’s supposed to have a ‘cyclists only’ path.  I’m not the only one to have been captivated.  The ubiquitous love locks have made an assault on the bridge, but nothing can detract from it.  Kładka Ojca Bernatka, or the Father Bernatek Footbridge, was opened in September, 2010, on the site of a former road bridge dismantled in 1925.  The 130 metre structure, designed by Andrzej Getter, has no supports and is suspended upon an arch.  The wonderful acrobatic sculptures are the work of Jerzy Kędziora.  The districts of Kazimierz and Podgórze are linked once more, which will benefit the latter. 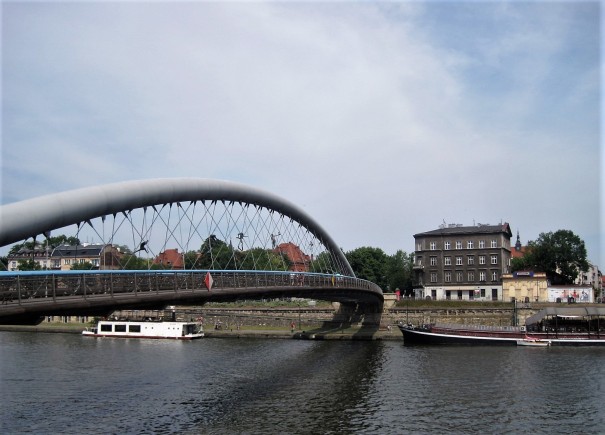 Tearing my attention from the bridge, it was time to investigate the corten steel clad building, which turned out to be the former power station in Podgórze.  Now an exhibition space and cafe, as it was 10.45am and opening time not till 11.00, I decided to push on and explore the area. 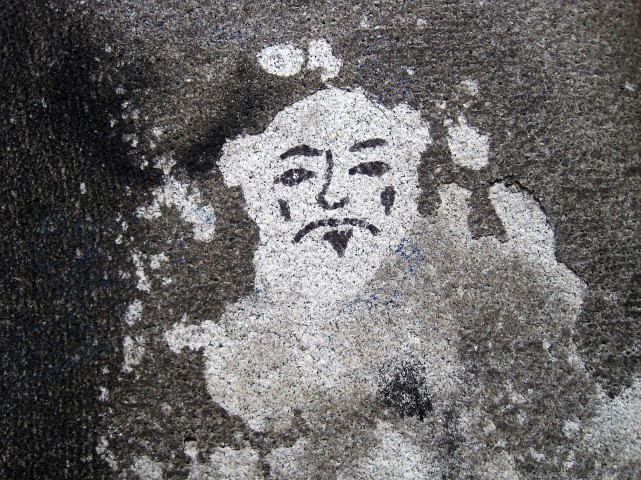 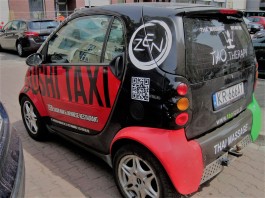 It’s a bit ramshackle in places, but turning onto Rynek Podgórskie I looked across a huge space at a striking church.  Sw. Jozefa w Krakowie Podgórzu had a delightful surprise awaiting me.  But first, a peep inside.  Dressed all in finery, as befits a wedding.  I dared not linger. 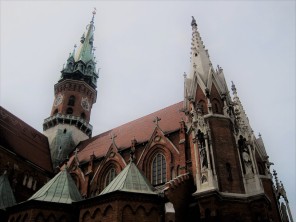 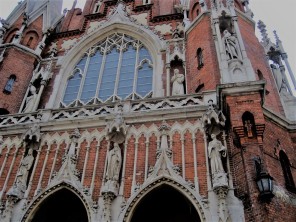 But outside, behind the church, an invitation to a wonderful garden.  Mounting the steps I looked down upon a grotto and out across the rooftops.  A young couple, similarly entranced, were taking detailed photos, so I bided my time.  As I descended a sprinkler played across the flowerbeds, a mist of water catching me out.  You can see the droplets, if you look closely. 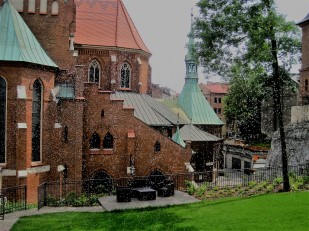 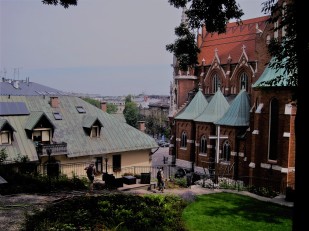 A smile still on my face, it was time to retrace my steps across the bridge.  Naturally I couldn’t resist a few more shots.  I needed a coffee, but the big old wooden barge ‘Barka’ was closed, and smart ‘Augusta’ was busy with a conference.  That left me one other option.  A smaller boat with a comfy seat on deck, and a view.  Two guys in a blow-up dinghy drifted by and waved.  I smiled and waved back. 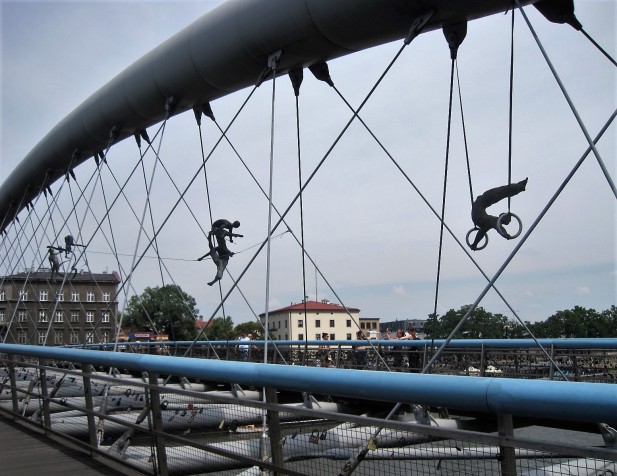 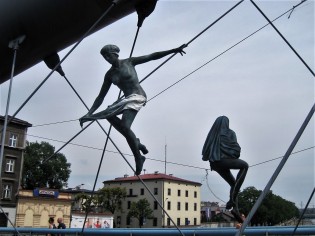 Wondering about cake?  I was good on this occasion, but with a venue for later in mind.  First I had a walk along the riverbank.  Music was drifting across the river from the big stage at Termy Krakowskie, a nicely relaxed vibe, as my son would say.  He’d love it.

Boat hire was quiet, but Wawel Castle looked Saturday busy.  Any ideas where I’m heading?  Hotel Pod Wawelem has a roof top restaurant, as the name indicates, directly below the castle.  No doubt about it- cake with a view! 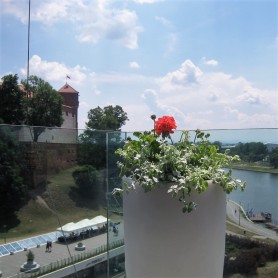 Fully satisfied, the trip wouldn’t be complete without paying my respects to Wawel.  Even on a busy Saturday, the place is sublime. 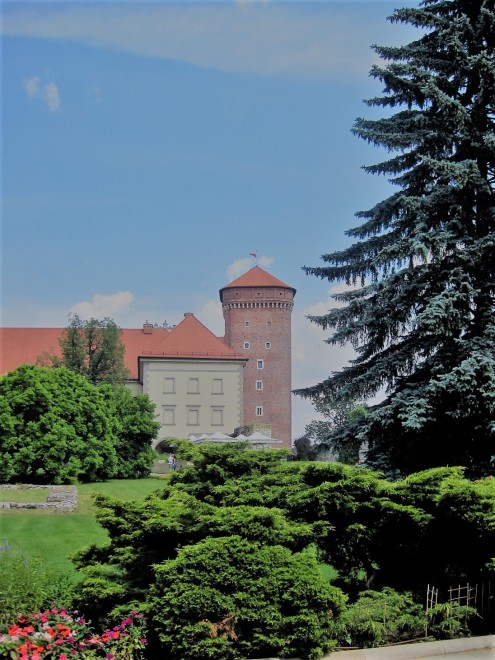 ‘Home’ one last time.  Just one more Reminiscences from Poland to come and that will be my trip complete.  Already it feels distant.

I hope you enjoyed sharing Kraków with me.  Time to put that kettle on for this week’s walks.  Many thanks, everyone!  Join me here at any time on Jo’s Monday walk.  You’ll always be welcome.

One of Debbie’s loves is street art.  She was richly rewarded in Madrid :

This is a Square

Drake has been captivating me with a series of photos of the island of Gozo :

An enigmatic title from Jackie this week :

Lady Lee sets the world on fire, but don’t worry- it’s quite safe!

Gunta shares more of the beautiful, natural world on her doorstep :

A stroll through the meadow

Share some ‘lolling kangaroos’ with Pauline.  She’ll be delighted if you do :

Or hoof it from snow to ‘shy rays of brightness’ with Susan :

A heart stopping moment, just looking at one of Cathy’s photos.  Don’t miss it!

And if you have time to spare you could join Indra on Prince Edward Island :

PIE (PEI) in the Ocean

That’s it for another week.  Can you believe, we have a drop of rain here in the north east?  I’d forgotten what it’s like.  Have a good one!