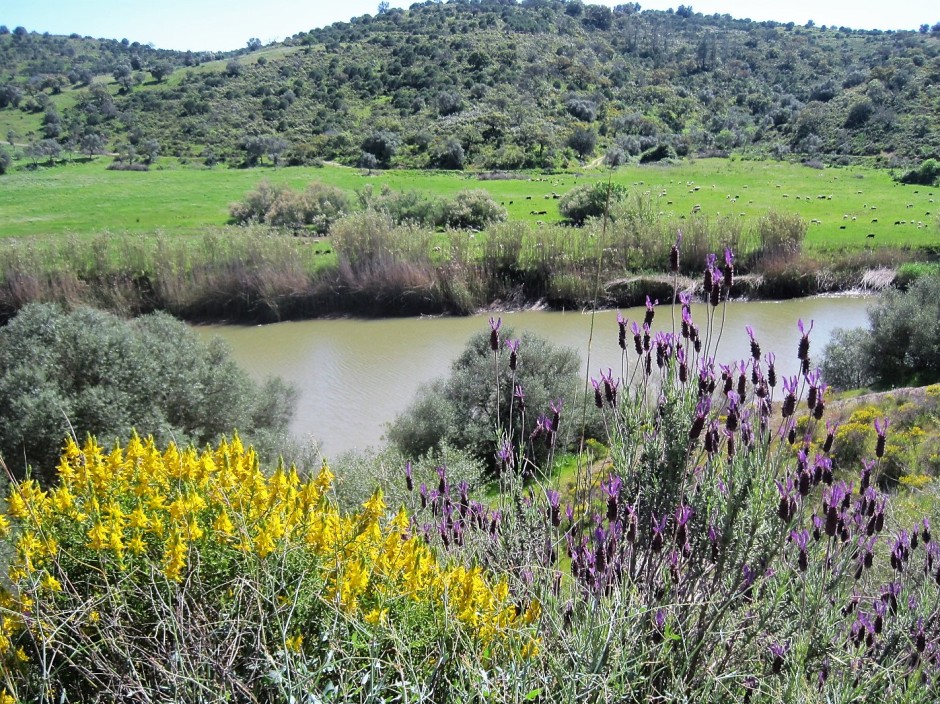 From one extreme to another, last week’s gentle look at village life to this week’s biting off more than you can comfortably chew.  Does this look like a promising start- the cemetery wall in Odeleite?  It was all downhill from here- a seemingly endless set of concrete steps, and yes, I did stop to wonder how I’d find the energy to climb back up them.  But all’s well that ends well, isn’t it?  There was a seat awaiting my return. 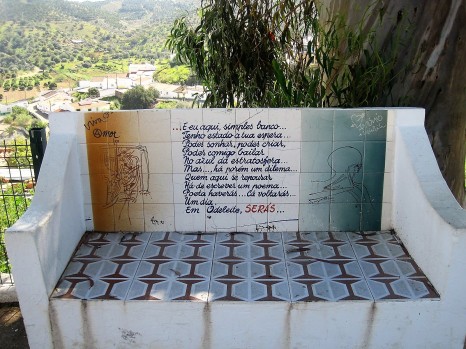 Odeleite is such a pretty village, as you can see, though not a little steep.  That morning I was surprised to find a skirmish of bikers, clad in leathers and revving their engines on a narrow terrace.  Much preferring the tranquil life, I moved on. 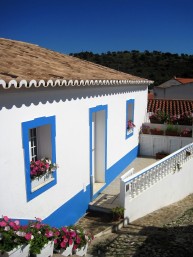 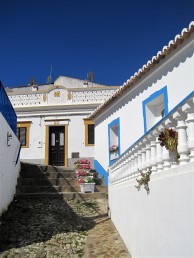 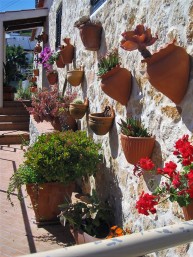 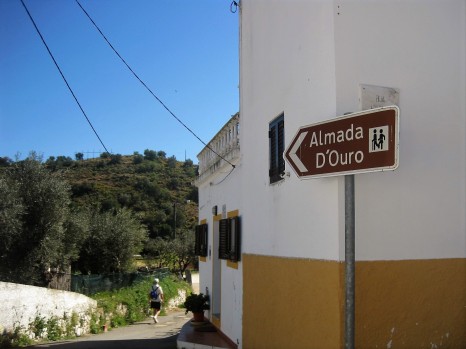 The goat did try to warn us!  The water course looked very inviting, and with a picnic I could have lingered, but we had our walking heads on. 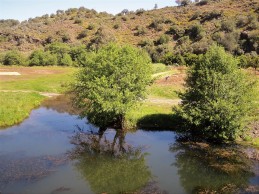 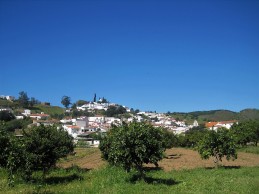 Now I have to confess that if things don’t go my way, I can get a little grouchy.  As we climbed the hill, away from the village and leaving the water far behind, I niggled a bit.  After all, we had set out to walk beside the water.  Or at least, I had!  But my persuasive other half insisted that route PR5 was exactly what we needed, and would bring us back to the river, in a loop. 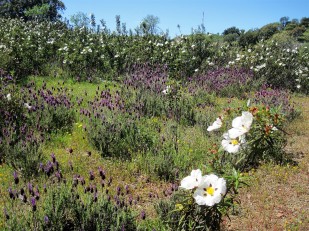 A rock pool or two spliced through the charcoal stone and everywhere rock roses waved and bobbed at our passing.  Hard to stay grumpy in surroundings like this.  After half an hour of dips and rises, we came to a village called Alcaria, where things began to look promising.  It’s well known I can be won over by a glass, or two!

Tucked down a back street, casa do pasto Alberto’s had a couple of outside tables. Unfortunately it was Sunday lunchtime, and inside was heaving with locals, tucking in.  We managed a chunk of gooey meringue apiece, before sadly moving on.  We were about to make our next mistake. The choice was a 2km return to Odeleite or to continue on the PR5.  Blame the wine, if you like, but I found myself agreeing to the latter. 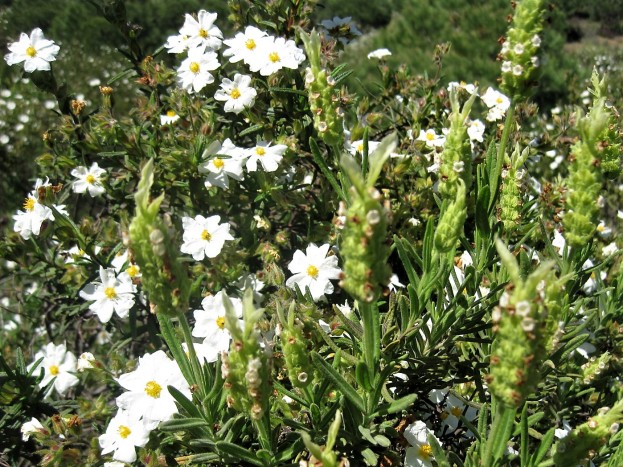 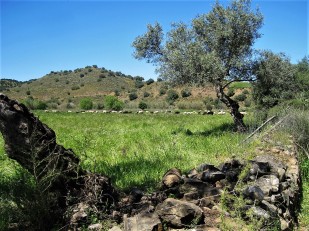 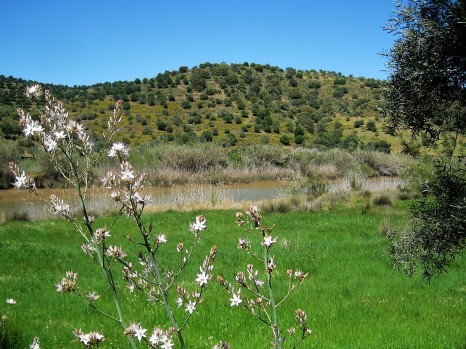 Did you notice that the sign said PR4?  Somewhere along the way we had left our PR5 behind. As we approached the river, a field full of sheep tinkled their bells at us.  We knew that we would have to cross the river to reach Odeleite, but where was the nearest bridge? 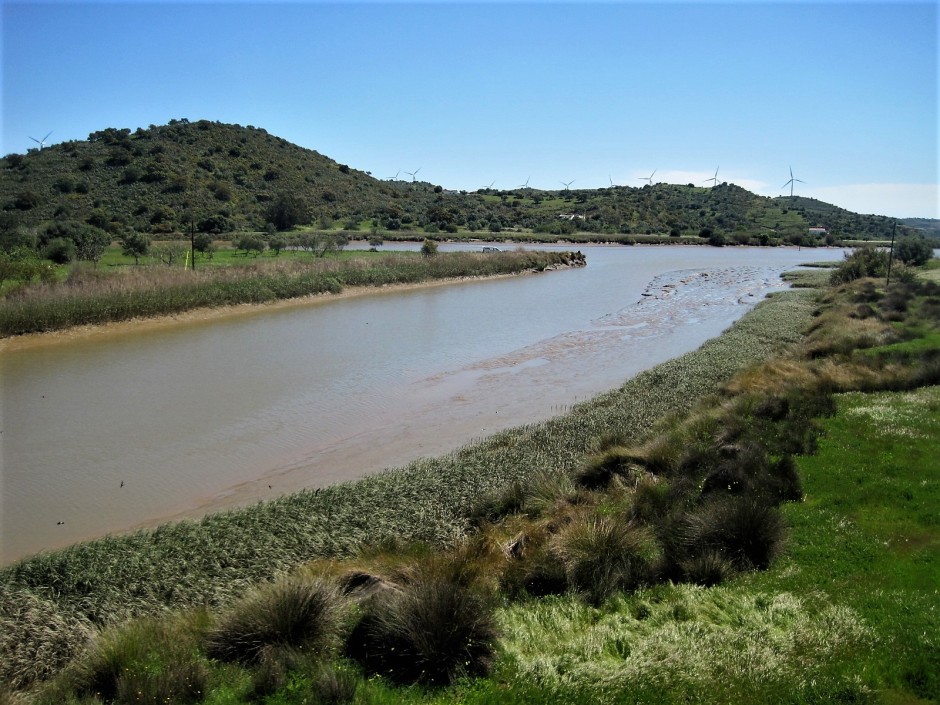 Some way distant, of course.  With great relief, we finally crossed a road bridge.  The sign read Foz de Odeleite.  Familiar territory!  At least, I recognised the restaurant.  Still quite a way to go to our destination, but the sky was blue and the scenery beautiful.  And I was following my river! 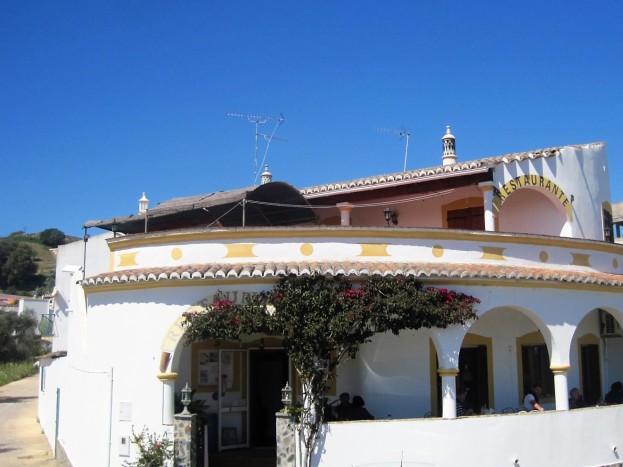 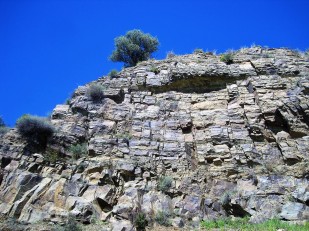 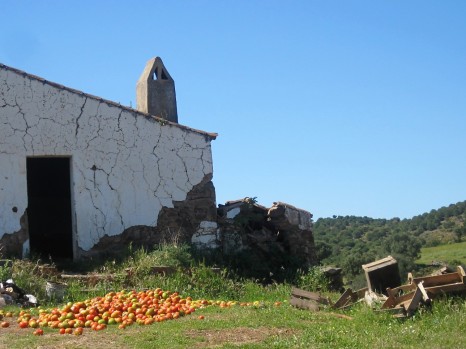 Over on the far bank we spotted the sheep we had passed earlier.  A tempting tumble of apples by a deserted farmhouse…  if I took one, would a dog race out, barking?  With serenity all around us, it was a shock to the system to find that trouble was lurking, just ahead. 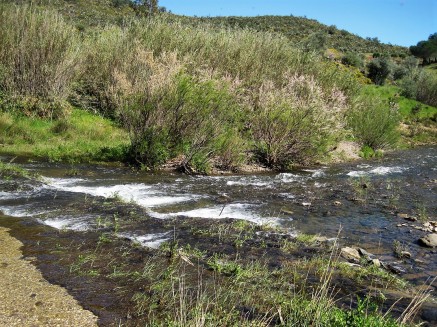 A ford that we really hadn’t bargained for, and quite deep.  Retracing our steps was unthinkable, so it was off with the shoes and a slow, steady wade across, holding hands.  On the far side a Portuguese family watched, the small boy busy amusing himself.  Stones and rivers go together, don’t they, but he stopped play, open-mouthed, to watch our progress.

We dried off, and a sign pointed us directly towards Odeleite.  What could be easier?  Smiling cheerfully at the family, away we went.  Along with the cistus and lavender, tiny blue iris winked shyly at us. 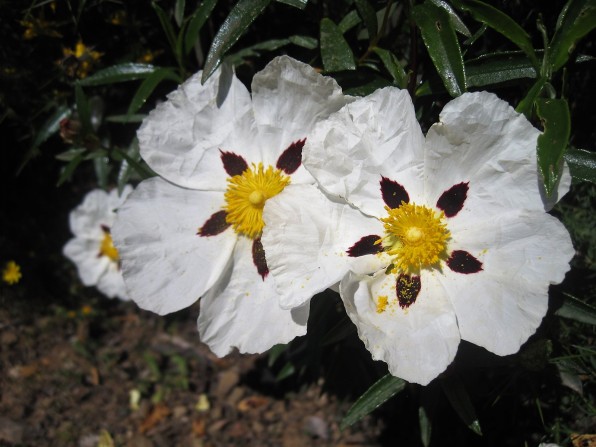 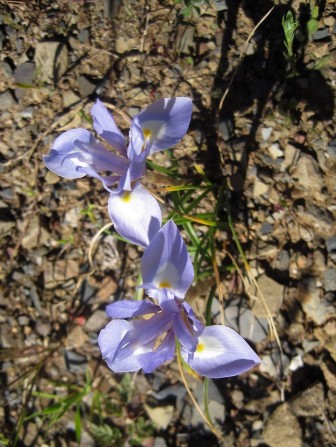 Tired but hopeful, there was yet one more twist in store.  Always observant, my partner had realised that the river was flowing in the ‘wrong’ direction.  Increasingly doubtful, he wanted to go back, ‘just to be sure’.  Abandoning whatever good sense I had left, I returned with him to where the bewildered Portuguese family, fortunately, still remained.  Halting language, gestures and smiles confirmed what I already suspected.  We had been on the right track, and had to retrace our steps. 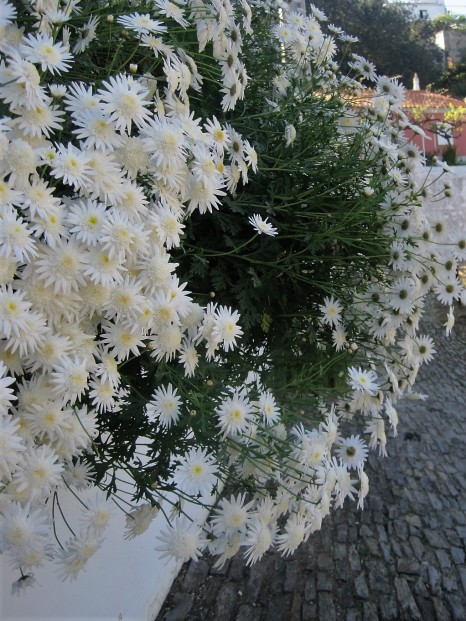 Eventually, we did make it back to Odeleite, after 6 hours of walking and at least 16km.  As we came into the village, it was immediately obvious the mistake we had made.  Isn’t it always?  We had started out in completely the wrong direction.  The walk we were ‘following’, Terras da Ordem, from the Walking Trails in the Algarve book, gave 2 choices of starting place.  Maybe we’d have been better off with the other! At least we didn’t have to climb those woeful steps.

If you’re feeling brave and want to try it, you need to scroll almost to the end of the website, to page 140.  And in fairness to the better half, we were at the junction of 2 rivers, as the map will show. Confusion all round!

Thanks folks, for following my weary feet.  Sometimes it’s not such a good idea.  I will struggle to respond to you today because very last minute plans mean that I am in Bristol as you read this.  I hope to have WiFi at some point, and if all else fails I’ll be home again late Tuesday. If I haven’t shared your walk this week, it’ll be here next Monday.  Kettle on now, and feet up, my happy band of armchair walkers!

Becky, the laugh was on us!  One of these days we’ll walk together and I won’t get lost!

Nightingales in the Pomegranate Trees

Bavaria is so pretty, isn’t it?  Lady Lee spent a few days there :

Jackie’s still battling the elements and having fun in California :

Day 3 So Cal- Monterey and Area

Woolly shows his serious side with an Anzac Day post :

While Drake has fun with a broken bus in Lancashire :

Meg keeps me well supplied with beautiful beaches.  Tread carefully on this one!

It remains to say that I hope you had a great weekend, Bank Holiday or otherwise.  Words will struggle to describe mine.