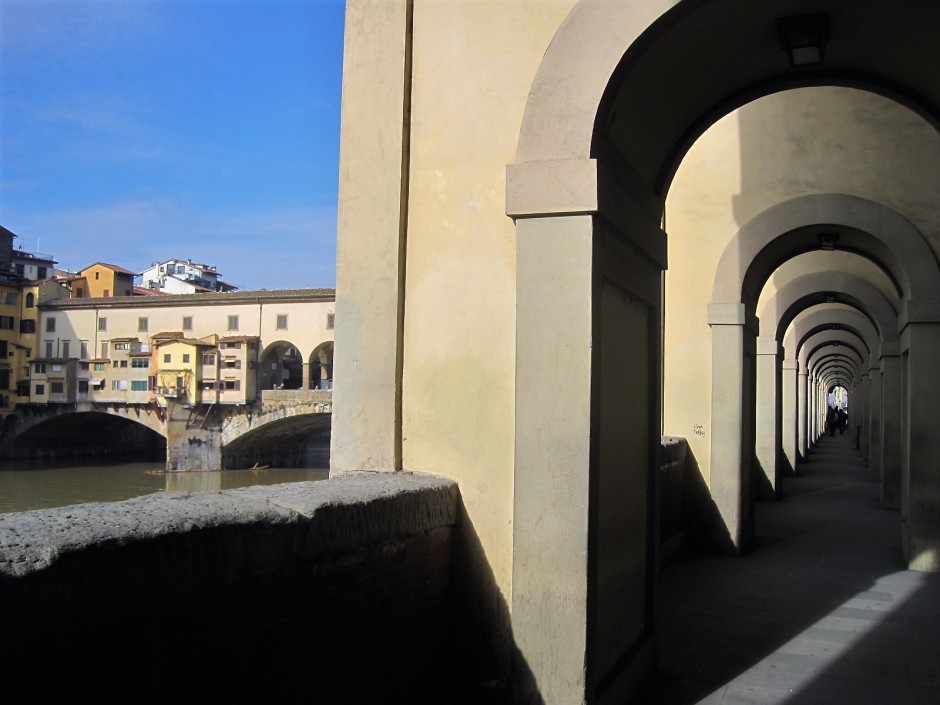 I’m going to be very gentle with you this week.  We’re going to stroll along the banks of the River Arno.  Can there be anybody who thinks of Florence and not immediately of the Ponte Vecchio?  It’s the iconic image, and I couldn’t wait to see it for myself.

A stone bridge has existed here, at the narrowest point of the entire Arno river, since 972.  In that time the bridge has twice been destroyed by flood, in 1177 and 1333.  The current bridge has been in place since 1345 and is a bit of a survivor.  It was the only one of the city’s bridges left standing when the Germans retreated in 1944, having bombed all of the others.  You shouldn’t be too disappointed to find that, up close, it has a slightly ramshackle appearance.  Hitler may have declined to destroy the bridge, but in 1966 nature did her very best to sweep it away.  The floods that year were catastrophic, damaging buildings and destroying artworks.  But the bridge held. 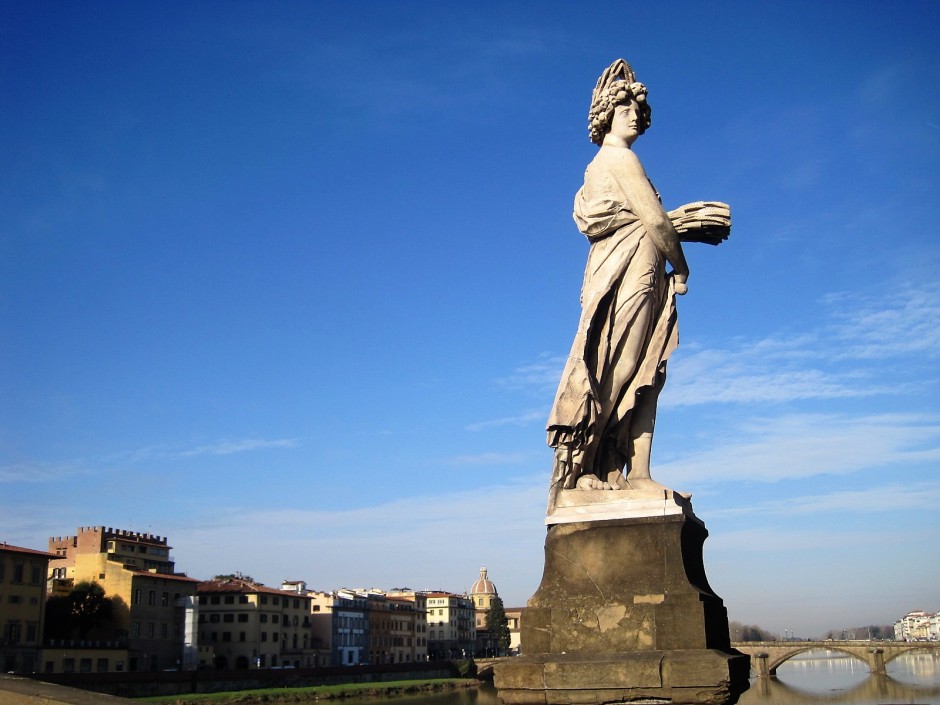 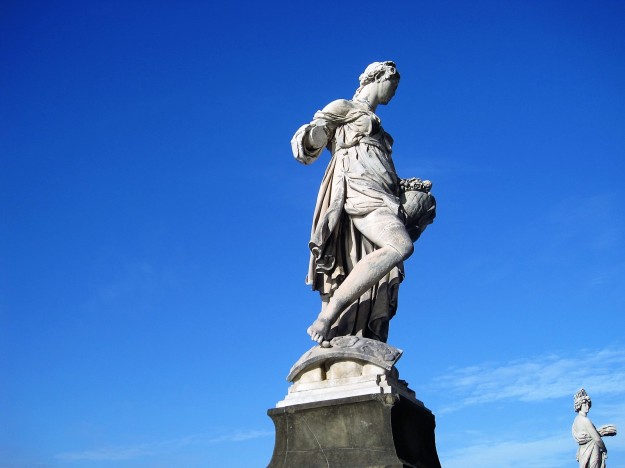 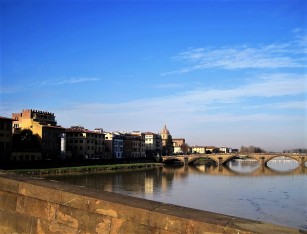 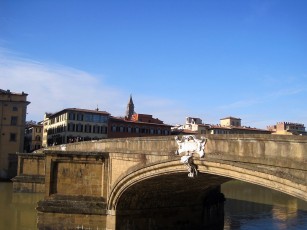 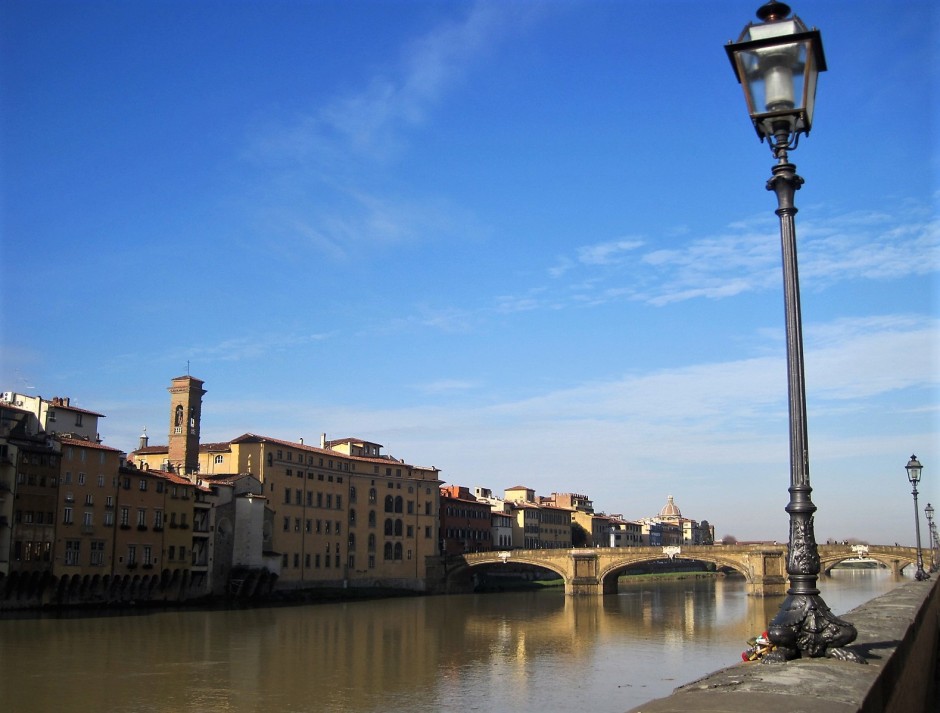 It’s a peaceful sight on this early Spring morning, but down on the river bank a team of workers are clearing debris.  This is not a river to turn your back on.  Heavy rain the previous day had caused it to rise. 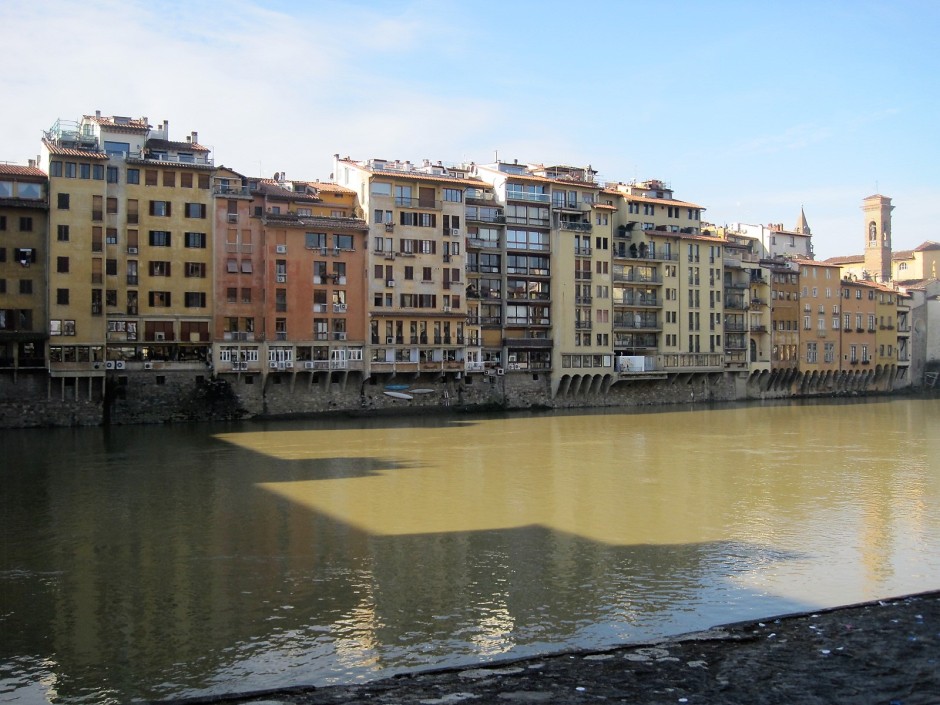 The deep shadows herald our very special bridge.  In 1593, Ferdinando de Medici commanded that the rather smelly butcher’s shops, used to discharging unwanted produce into the Arno, be replaced by sartorially more elegant jewellers.  And there they remain, to this day. 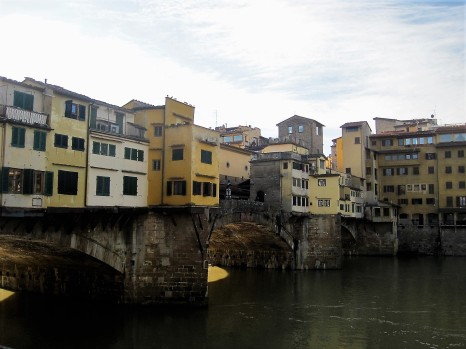 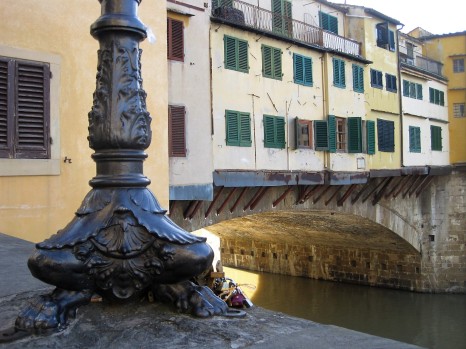 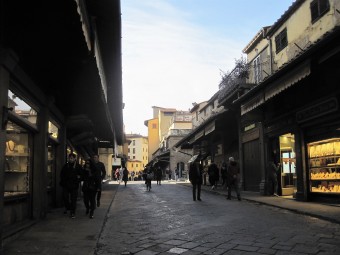 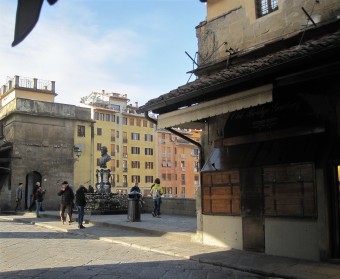 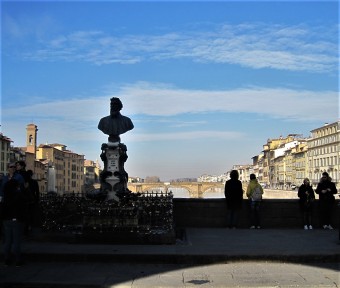 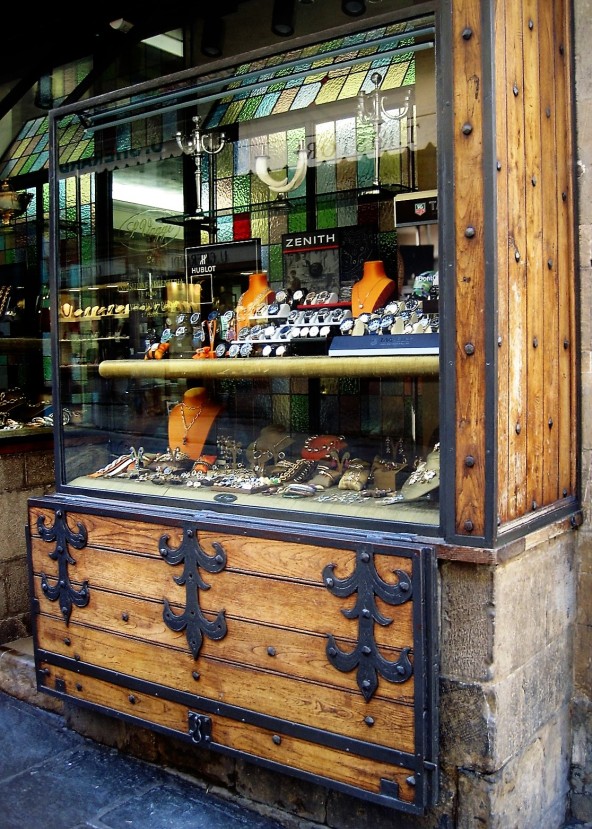 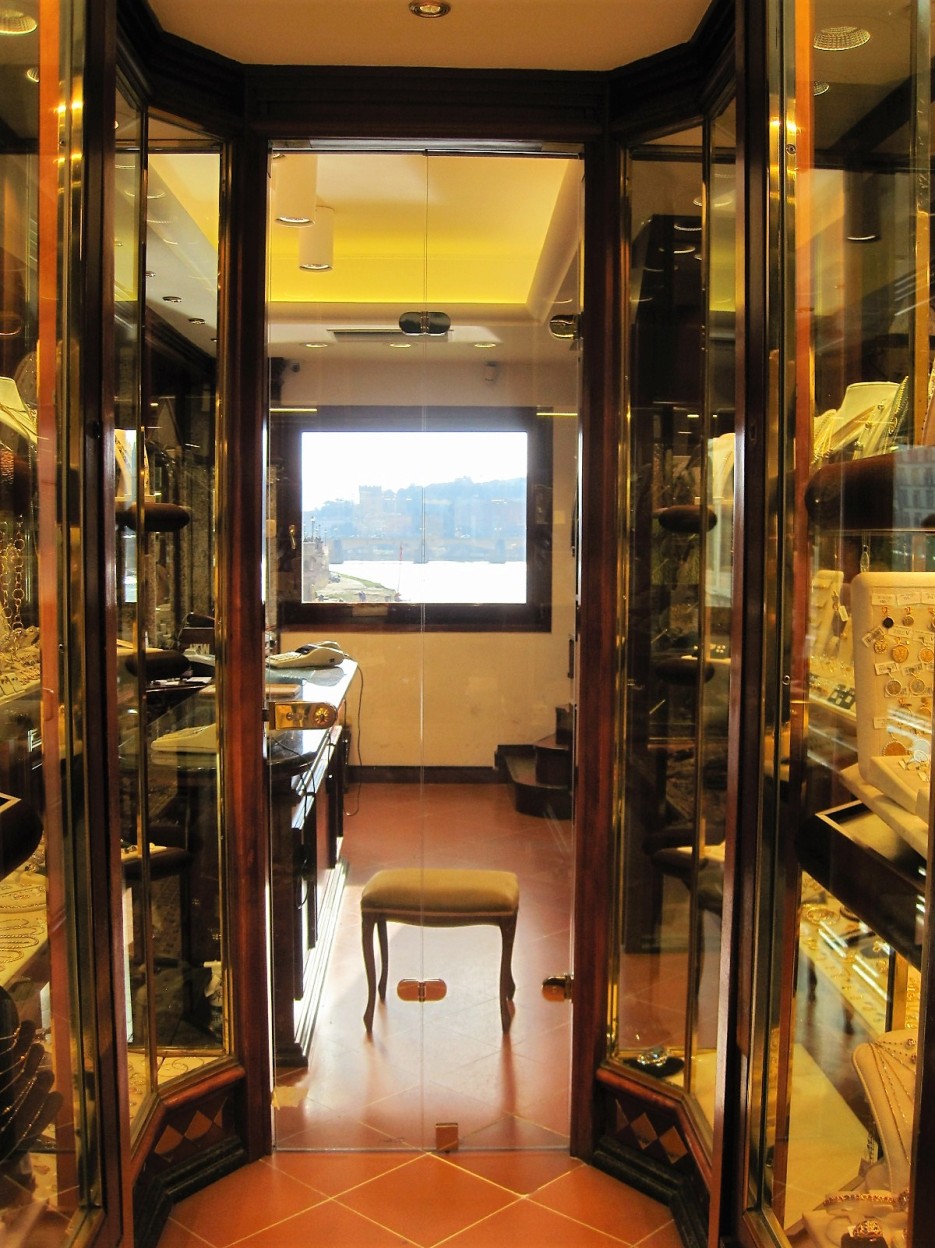 Above the jewellery shops, on the eastern side of the bridge, runs part of the Vasari Corridor. This amazing secret passageway was built in 1565 for Cosimo de Medici.  Connecting the Palazzo Vecchio with the Pitti Palace, about 1km away on the opposite side of the river, it assured privacy and protection in those times of intrigue.  During WWII the treasures of the Uffizi were stored in this corridor, for preservation.  Art resides there still. You can clearly see the grilled windows, over the shops, in the photo below. 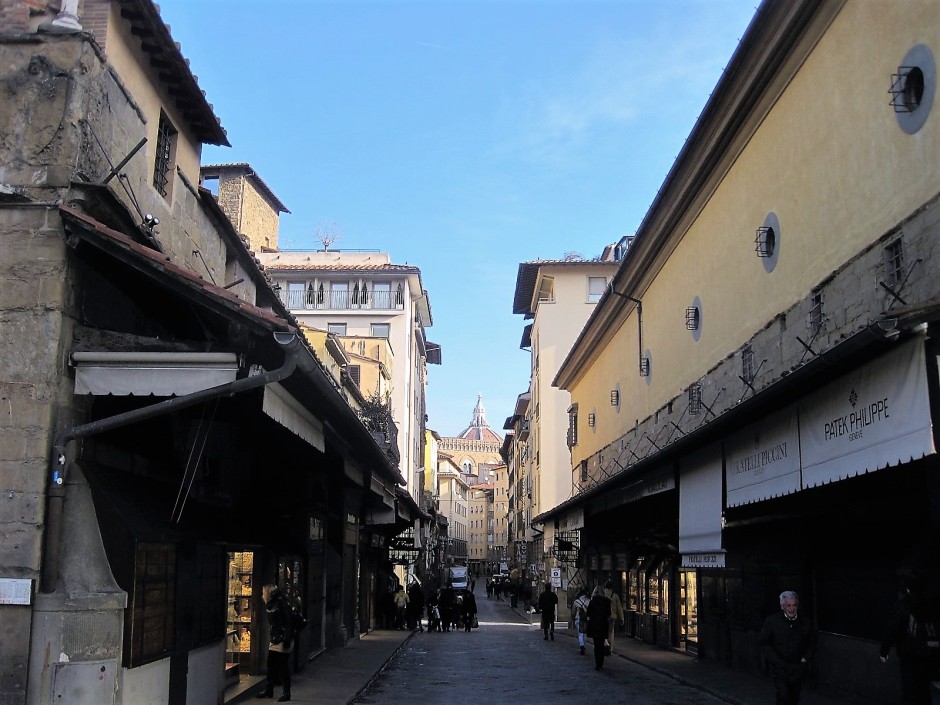 Crossing over the bridge to Oltrarno, literally the other side of the Arno, continue along the river bank.  It’s hard not to stop to look back. 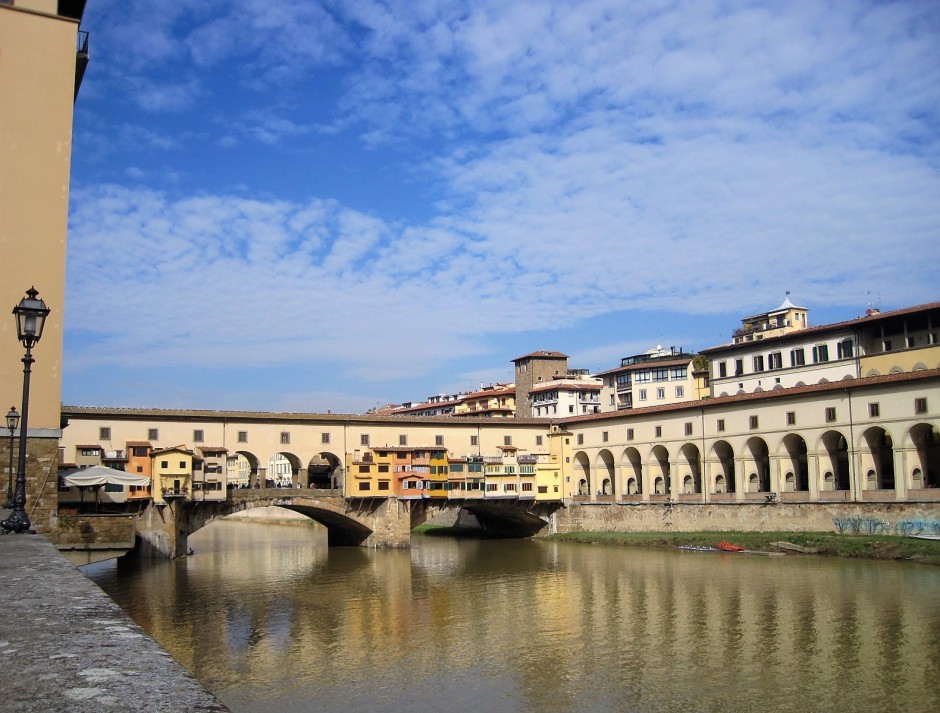 Across the river rises the delicate spire of Basilica di Santa Croce.  With just a short detour you could admire it’s magnificent facade.  Recross the river by graceful Ponte alle Grazie.  In the far distance, snow kissed mountains brush the sky. 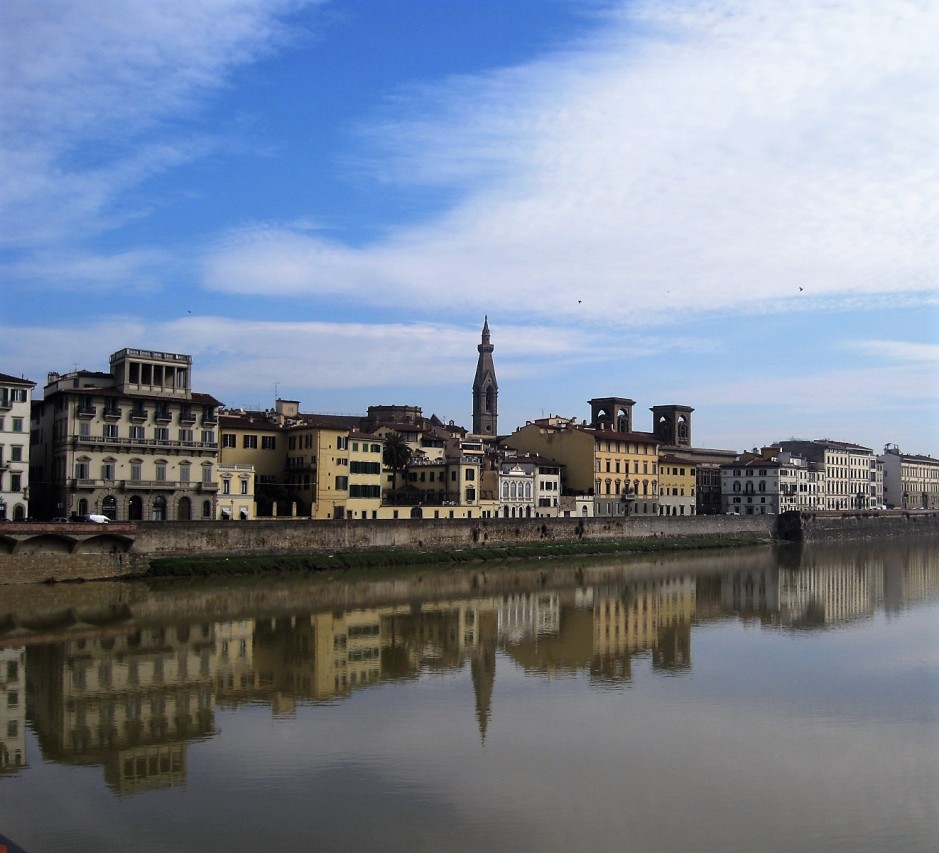 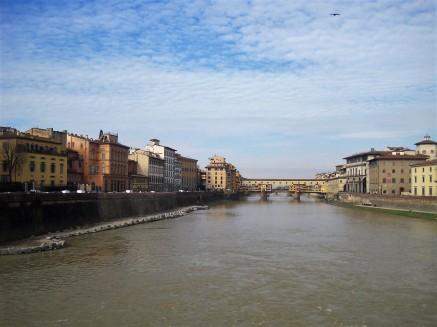 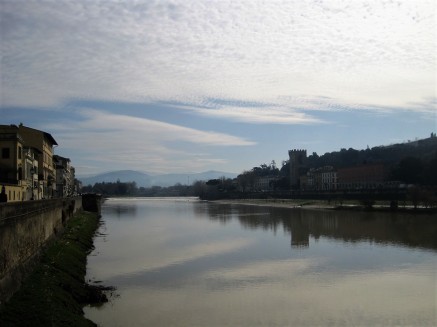 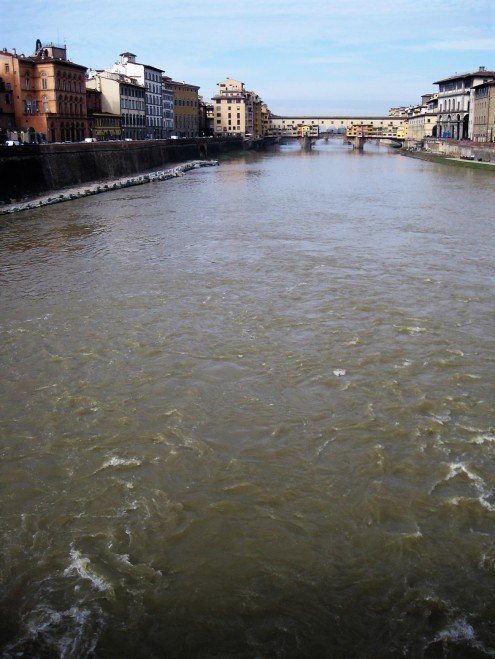 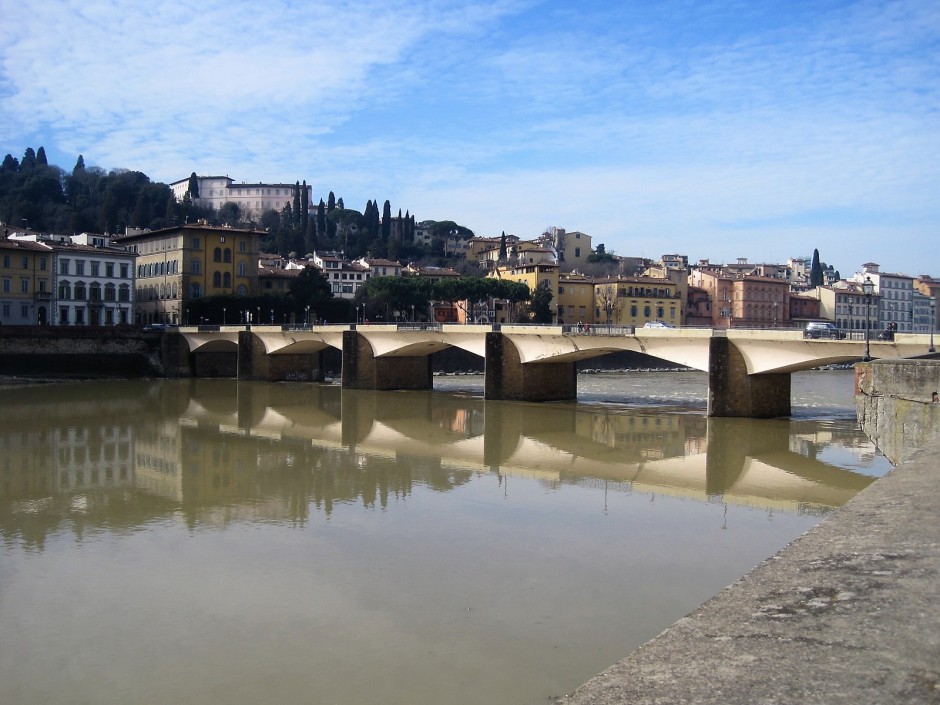 Via de Benci will take you directly to Piazza di Santa Croce.  In Savonarolo’s day, this was a place of execution, and violence is still enacted here in the 3rd week of June each year, when calcio storico takes place.  Roughly combining football and rugby, it is not for the faint hearted.  Headbutting, punching and choking are all allowed.

Basilica de Santa Croce is an altogether more peaceful place, where you will find the tombs of Michelangelo, Galileo, and Machiavelli, among others. The cloisters are renowned for their wonderful frescoes by Giotto. 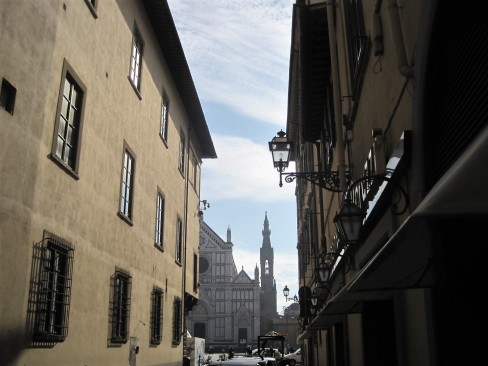 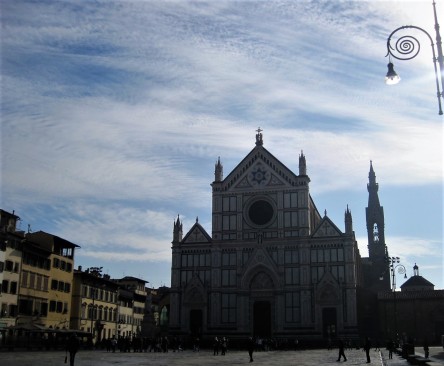 Retrace your steps to the river, or choose to linger in the maze of streets that lead to the Uffizi. There are too many distractions by far. 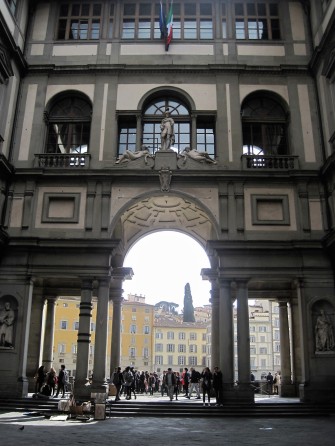 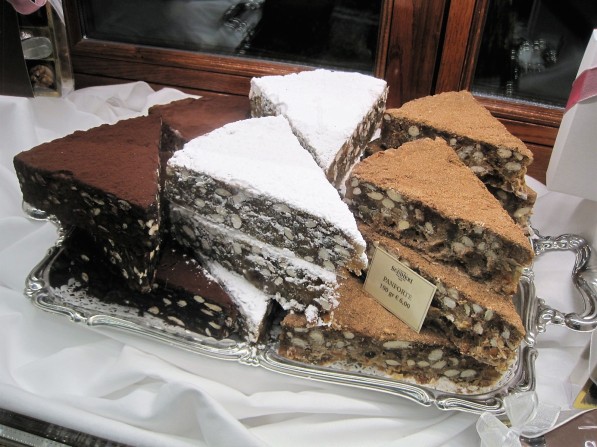 Me, I’m drawn back to the spectacle of the bridge.  Spanning the river for all those years, it’s beaten gold resisting all the forces that nature can summon.  But powerless against the lovelocks. 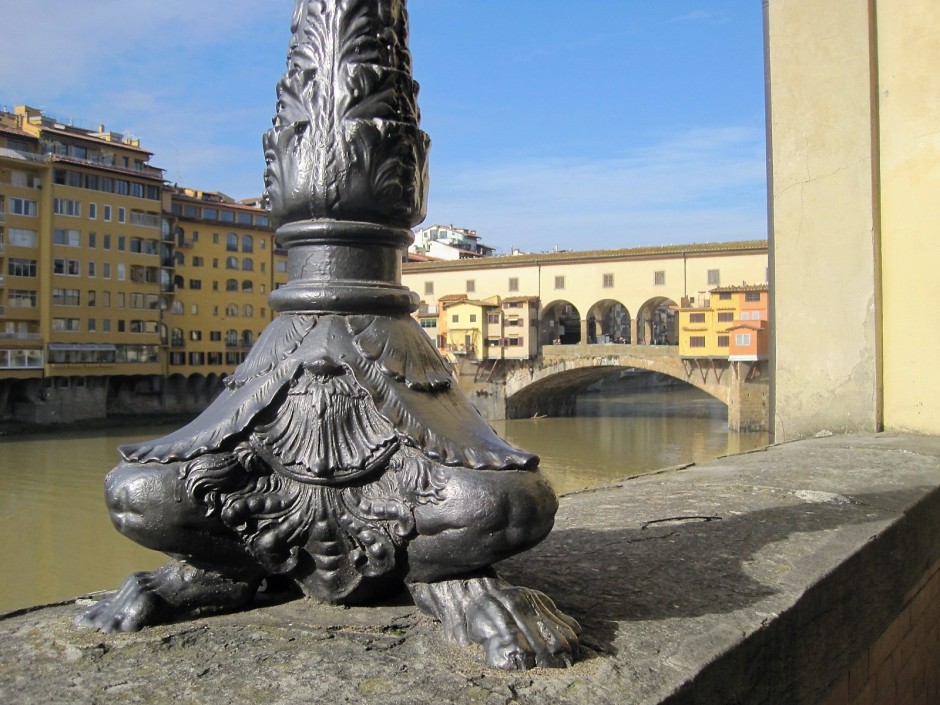 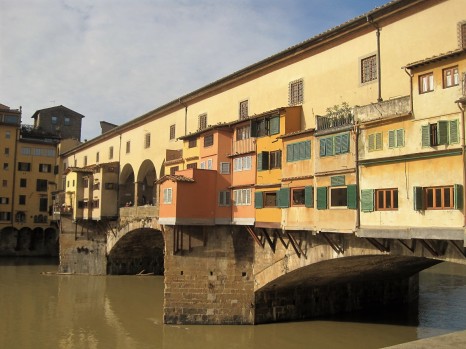 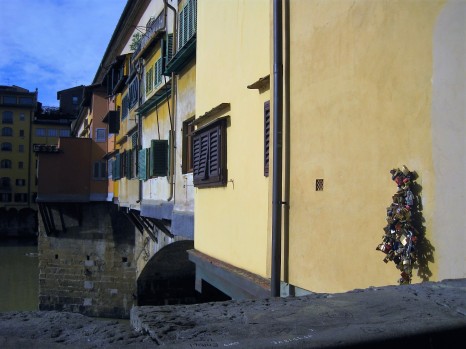 I hope you enjoyed my first venture into Florence by daylight.  Next week’s walk will be far more strenuous.  There are heights to scale!

In my absence the walks continued to tumble in.  Please take some time to read and enjoy them. Many thanks to all of you for your patience, and continued support.  Now, let’s get the kettle on! I’m sure I saw cake somewhere.

I hope you’ll join me for more of alluring Florence next week.  Details of how to contribute a walk are on my Jo’s Monday walk page.  I’d love to have your company.

First up we have Eunice with a wonderfully unspoiled bit of Wales :

A discovery walk on the Llyn Peninsula

Closely followed by Jude, with more delicious shots of Lincoln and the cathedral :

And there’s also a stunner of a garden walk from my Queen of the Gardens :

Garden Portrait : Trebah in Winter (or A Walk to Alice’s Seat)

Jackie’s all ready to party, and when better than Carnaval?

What do you know about the Israeli countryside?  Why not let Lisa show you around?

Becky had to get the waders out for this walk!  Well, clean socks and a towel, anyway.  Cute pigs, though!

A three river adventure in the Algarvian hills

And environmental changes are a constant concern on the Algarve’s beaches :

The sands of the Ria Formosa are forever changing

Drake brings a lovely soft palette to our world :

While Jaspa has us climbing a volcano!

The Views from Mount Vesuvius

Do join Nicole and her lovely family in the desert!  You have choices :

Sabino Canyon : A Hike along the Phone Line Trail

I never can resist the Azores!  I’ll get there one day!  Please say hello to Uncover Travel :

Beautiful and individual images for you from Jesh :

Finally, I’m very familiar with the city walls at York, but not with these in Chester, so thank you, Carol!

Another wonderful selection, you have to agree.  Wishing you all a good week, with lots of healthy walking.