What do you do when an occupying force moves into your beautiful city?  You resist, of course.  Just how mightily the Poles resisted Nazi occupation was made abundantly clear to me at Oskar Schindler’s Enamel Factory.

It was a damp morning in Kraków, but I didn’t want to waste one of my few remaining days in the city.  I had an imperfect understanding of the location of Schindler’s Factory, but I alighted from the tram, south of the river, and began my search.  I knew that I was in the right vicinity when I entered a huge square, full of sculpted seats and a sad photographic display in black and white. Plac Bohaterów Getta (Ghetto Heroes Square) commemorates the Polish Jews who were imprisoned and died in the Kraków Ghetto between 1941 and 1943. 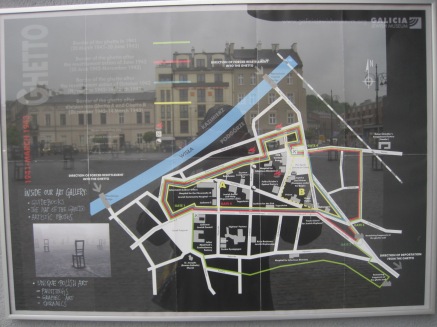 Oskar Schindler was a Nazi party member and a war profiteer, who earned the gratitude of 1100 Jews by giving them a second chance at life.  It is a remarkable story and one that touches me deeply.

The museum is a little off the beaten track, and my map reading skills sadly lacking, so I went inside the tiny art gallery on the square. The proprietor kindly gave me precise instructions (in English!) and I found my way around the excavations and building work to Ul. Lipowa.  It was raining steadily and I fell into step with a young Polish couple with an umbrella, who were also going to the museum. It being Monday, admission was free from 10-2.00pm, and understandably the museum was busy.  Initially I was a little confused by the layout, and the number of students clustered around, but once I found the correct door I was hooked.

Just a handful of the former workers saved by Oskar Schindler’s intervention.  The museum takes you through the years 1939-45, starting with life before the war.  Then comes German occupation, with its restrictions and consequences.  People are evicted from their homes with nothing but a few personal possessions.  A curfew is imposed and it becomes necessary to queue for hours to obtain the most basic food.  Polish secondary schools and universities are closed.  The Polish press is liquidated.  Any figure of influence or authority is regarded as a threat and dealt with accordingly.  The use of home radio sets is forbidden.  Loud hailers broadcast propaganda twice daily, and eventually the names of those sentenced to death.  Inexorably the rounding up of the Jews into the ghetto begins.

And the Polish response to this?  ‘Secret’ schools conducted in defiance, though involvement was punishable by death or consignment to a concentration camp.  An underground press and formation of a resistance movement to sabotage German efforts wherever possible.  The gallery below features a ‘secret’ teacher and messages from pupils.  The first face reminds me so much of photographs I have seen, from that era, of a deceased family member.  Many stories, both of pathos and of heroism, are featured throughout the museum. 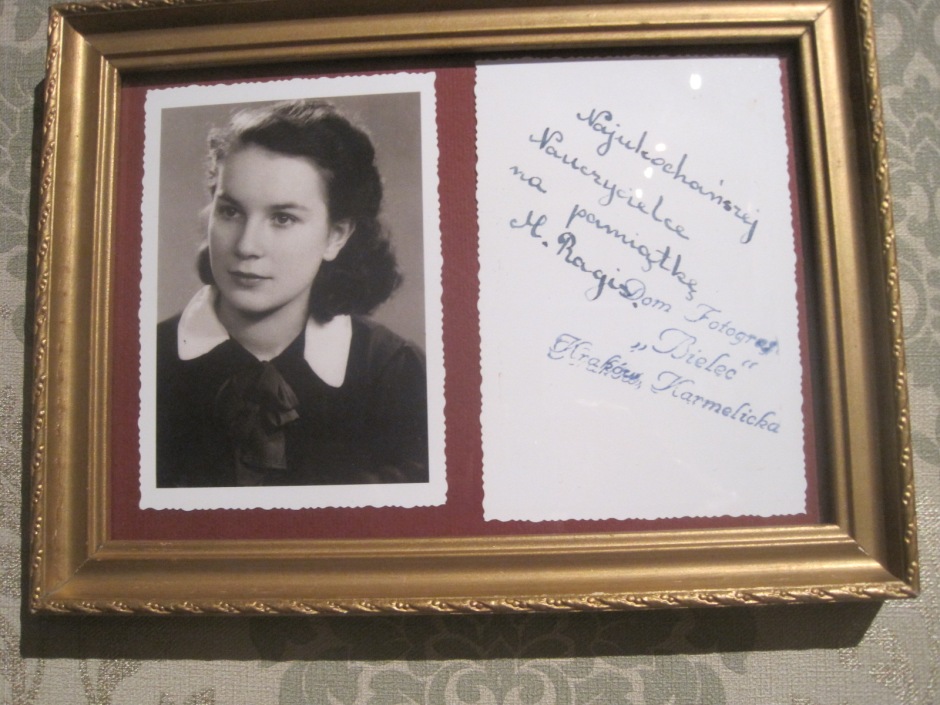 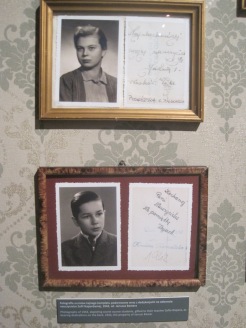 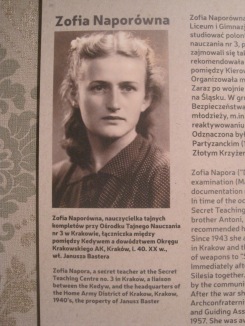 Up concrete stairs to the first floor, the museum really comes to life, introducing a pre-war Kraków photographic studio and a cast of characters. Before the war Jews accounted for over 25% of the community, and both Christians and Jews sat together on the City Council. 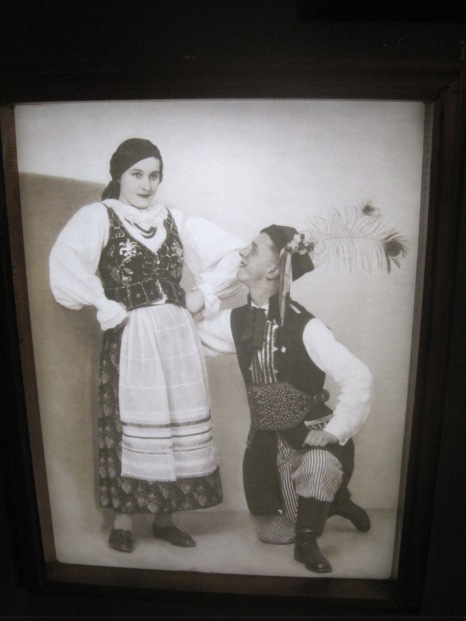 A narrow corridor leads to the Stereoscope- a device used for looking at individual stereoscopic photos.  They rotate inside a drum, giving the illusion of three-dimensionality.  This one dates back to the late 19th century.  It was a revelation. 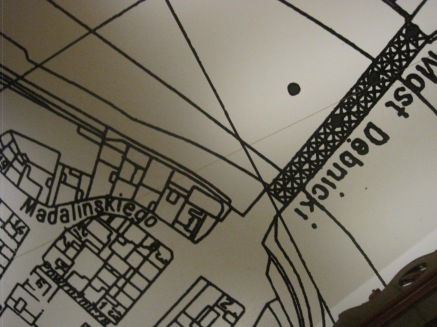 On 1st September, 1939 war broke out, and on 6th September the Nazis entered Kraków. The Wehrmacht flag flew over the sacred site of Wawel, and from the outset the prohibitions and orders began.  Jewish shops had to be marked, and were plundered by the Germans, and all Jews over the age of 12 had to wear armbands with the Star of David on the right arm.  Racial segregation had begun. 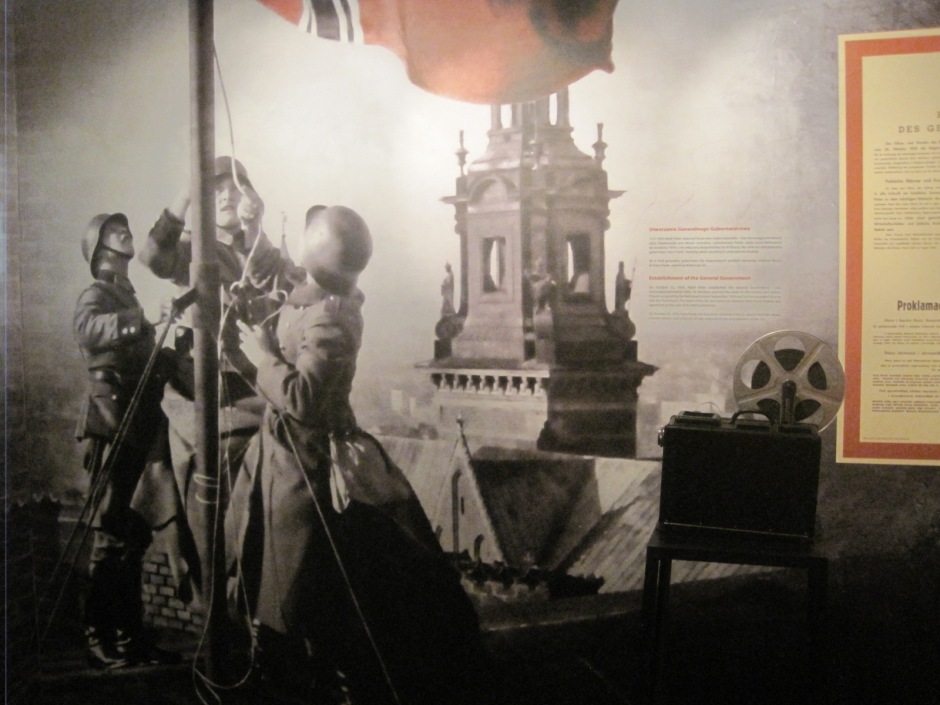 And then the nightmare of the Ghetto.  Intimidation, round-ups in the streets, imprisonment and interrogation in the Gestapo HQ on Ul. Pomorska and the prison at 7 Ul. Montelupich.  I read a few of the accounts of life in the ghetto, and the tram that ran through but didn’t stop.  There were sympathisers, of course, like Tadeusz Pankiewicz and his staff at the Eagle Pharmacy, who smuggled letters and messages to and from the ghetto. 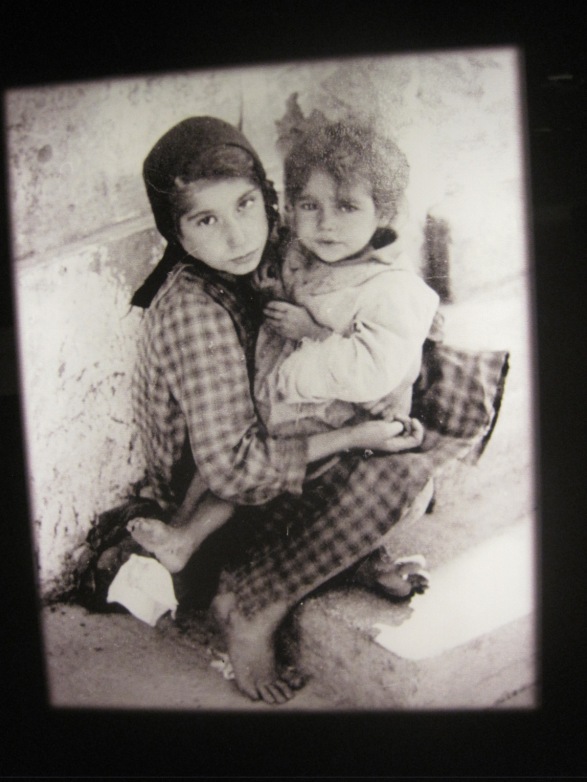 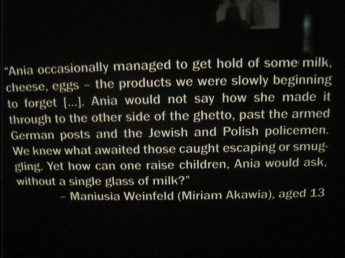 17,000 people were contained within the ghetto walls, where 250-300 calories was the daily allowance for a Jew.  Details of the resettlement can be found here.  I had not realised that the arched shapes of the ghetto walls were intentionally designed to resemble Jewish tombstones.  How sick!

Residents worked both within and outside of the ghetto, the luckier ones at Oskar Schindler’s Deutsche Emailwarenfabrik- DEF. These were taken to and from work under armed escort.  If you were not fit to work you would eventually be deported to an annihilation camp.

Zabłocie was an industrial area, with successful factories dealing in wire, mesh and iron products, soap, and enamelware and metal products. During the war a production plant for aeroplane parts and radiators, a crate factory and a barrack builders were added. Schindler took over receivership of the enamelware company, which was in financial straits, and with the aid of Jewish capital set about expansion.  A munitions section was added, to make mess tins for the Wehrmacht, and shells and fuses for artillery and air missiles, to assist in the war effort.  Working conditions were hard, but by steadily increasing his Jewish labour force from the ghetto, Schindler saved around 1100 grateful souls.

In Schindler’s office a glass cube designed by Michal Urban is the centrepiece.  It contains metal cylinders, inscribed with the names of the 1100.

He was no saint, Schindler.  Perhaps that makes his story all the more remarkable.  I have included links that will enlarge on the story if you are interested. The museum is over 3 floors, in the original factory building.  I found it to be charged with atmosphere.

The Historical Museum website brings together information on all of the Kraków museums.