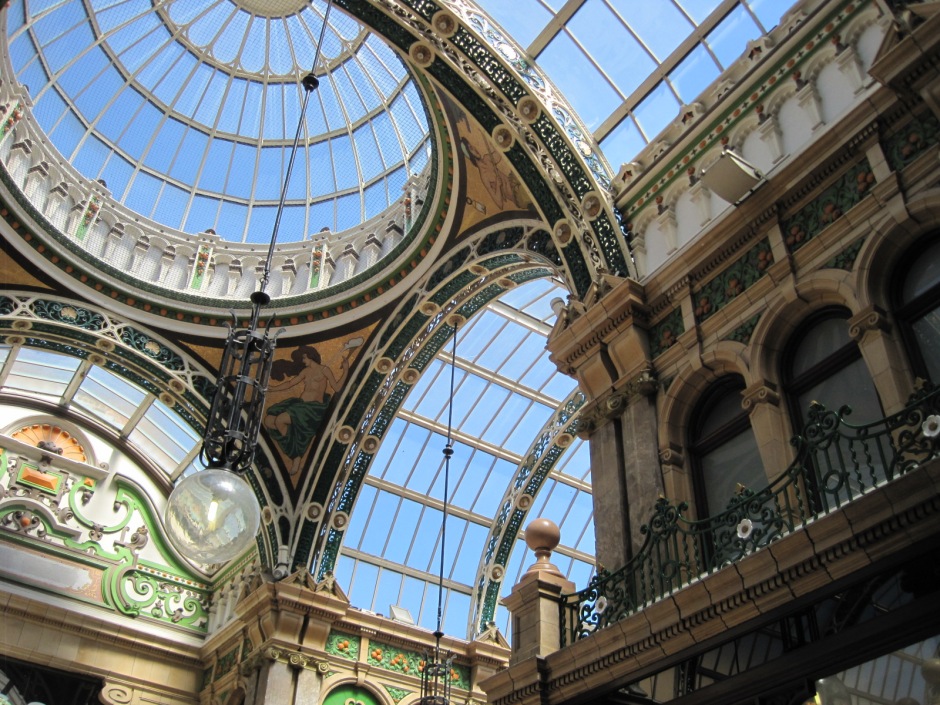 The breathtaking ceiling in the Victoria Quarter

I seldom pay more than a flying visit to the city of Leeds, but recently I had cause to wonder why. Never much of a shopper, I’m happy to let life flow around me as I absorb the architecture. Strolling through the city with my son, I was left far behind when we came upon the Victoria Quarter.  Here is just a glimpse of what I saw before I scurried to catch up. 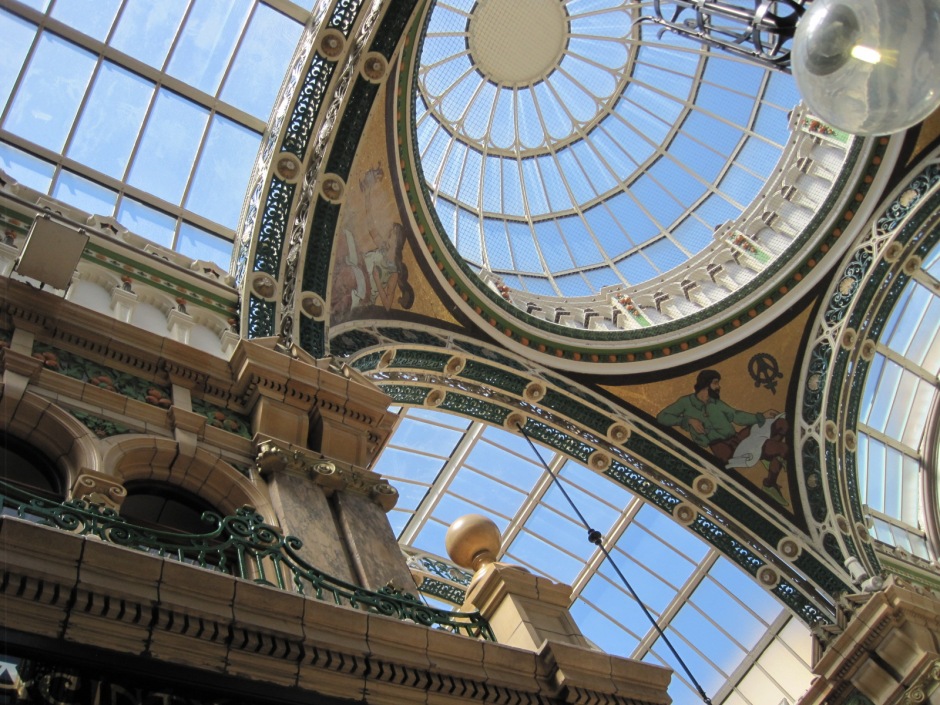 How about this for a ceiling? 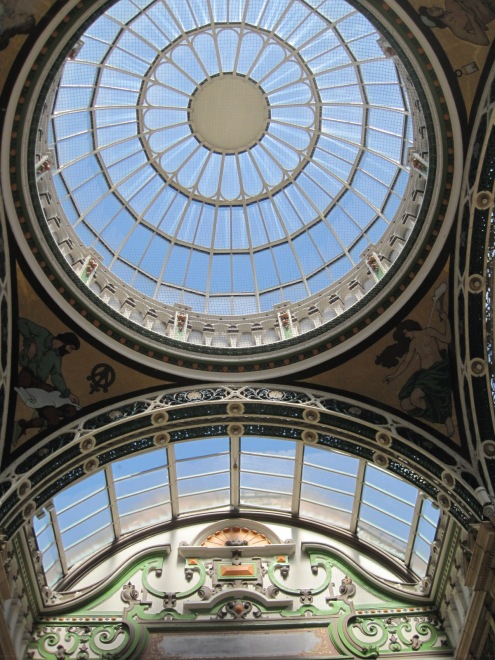 Worth getting a crick in the neck for 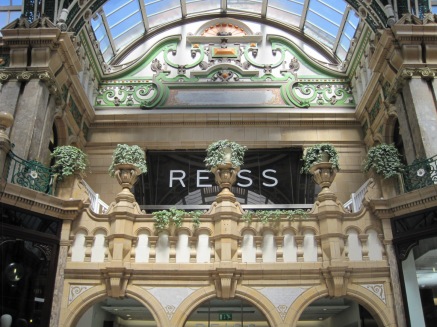 The detail was fabulous! 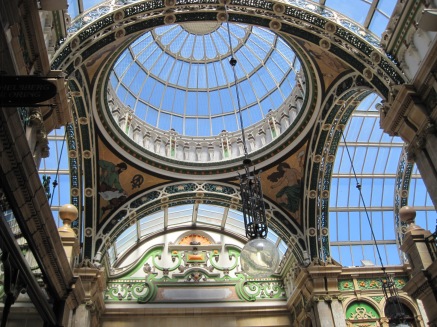 The wrought iron was spectacular too 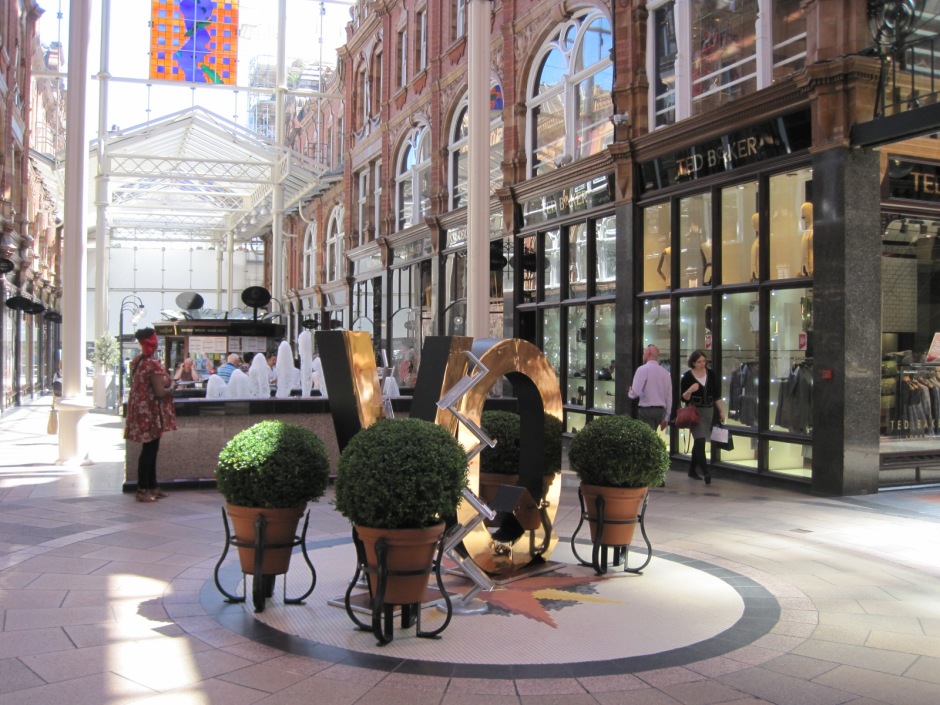 Nor was ground level too shabby 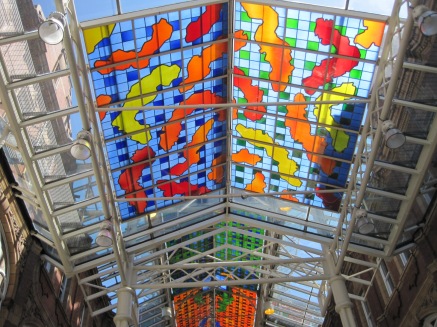 But repeatedly the eyes are drawn overhead 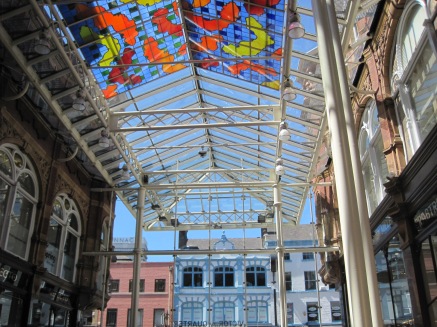 To where the modern intersects with the old 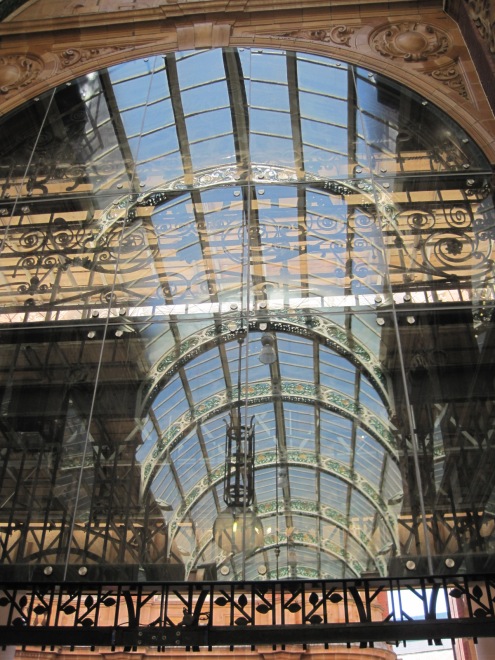 In a dazzling array of glass!

All of the top names in the world of designer clothes are here, so if you are a shopper you will undoubtedly be in heaven.  County Arcade, Cross Arcade and Queen Victoria and King Edward streets were linked together to form the Victoria Quarter in the 1900s. Theatre architect Frank Matcham was responsible for the design, which no doubt accounts for its drama,  lavishly using faience and marble.  The Empire Palace Theatre was originally part of the development, since replaced by Harvey Nichols department store.

Nothing stops in the world of design and Victoria Quarter is currently undergoing a new phase. Me, I was swept on past beautiful Kirkstall Market to the newer kids on the block, Trinity Centre. 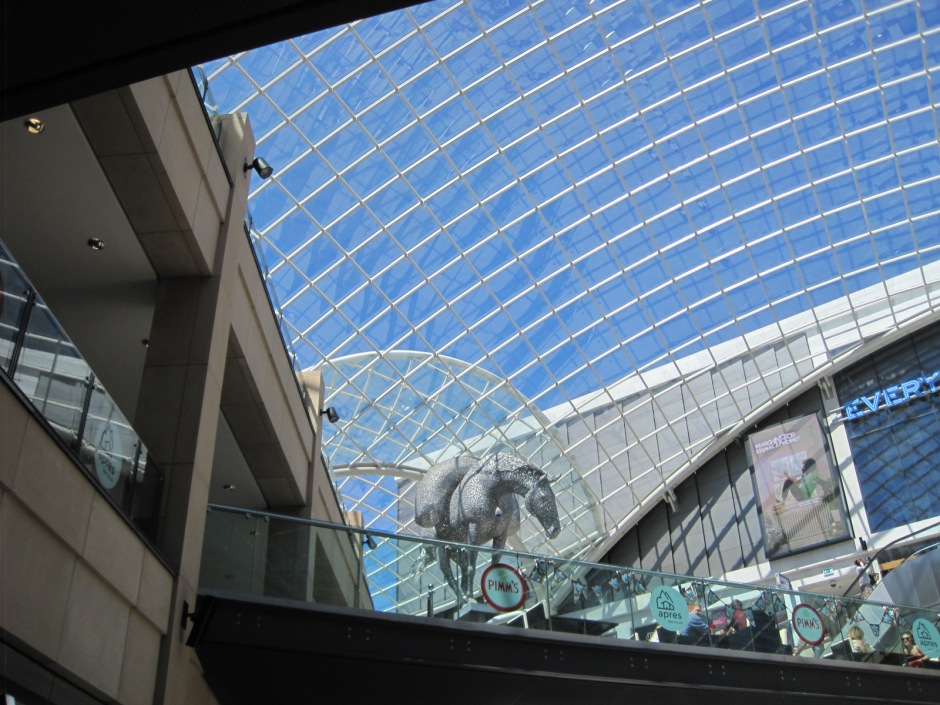 Looking up inside the Trinity Centre 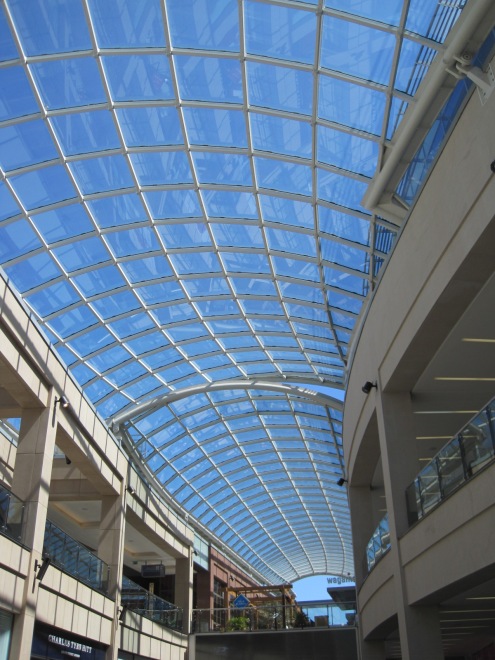 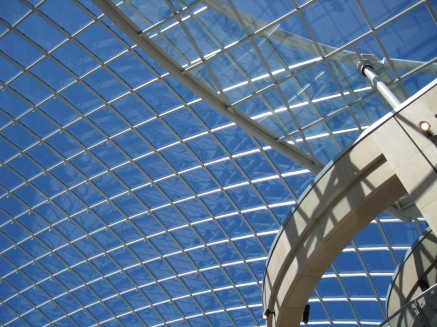 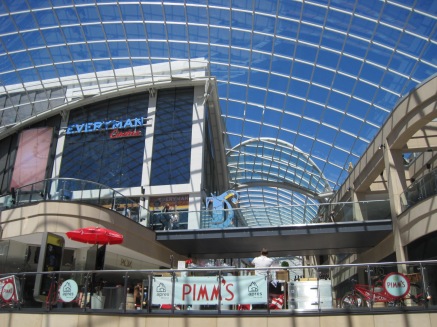 Are you a tennis fan?  Crossing town we came upon on open air big screen, and my son remarked that if Murray makes the final it would be a great place to watch the match.  Given current weather conditions that would seem like an excellent idea, but my husband, whose birthday it is that day, was less than thrilled with the suggestion. 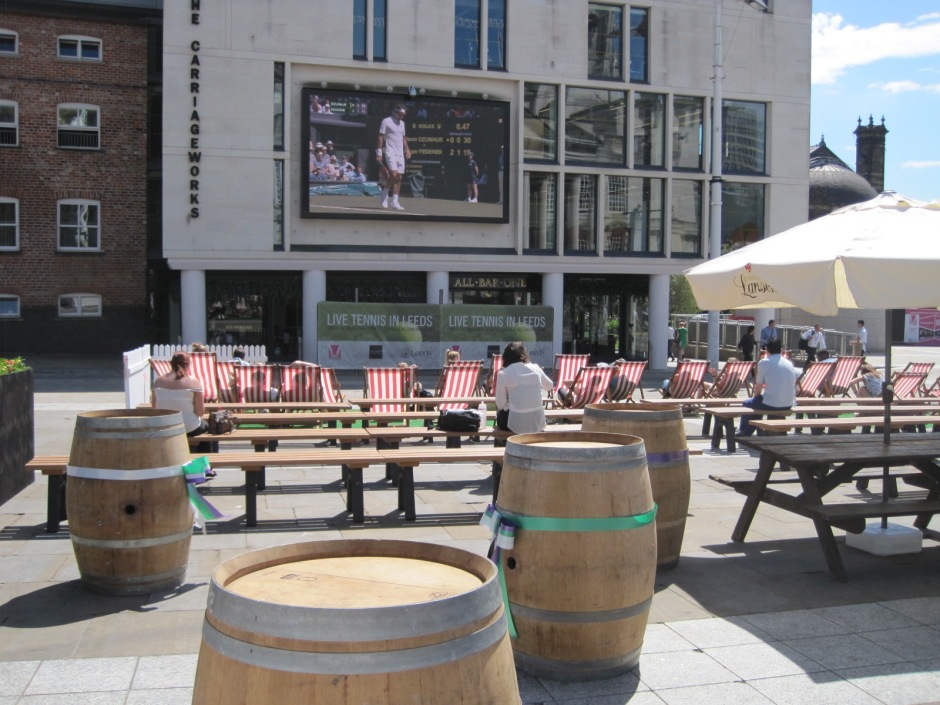 Federer, wilting in the heat? 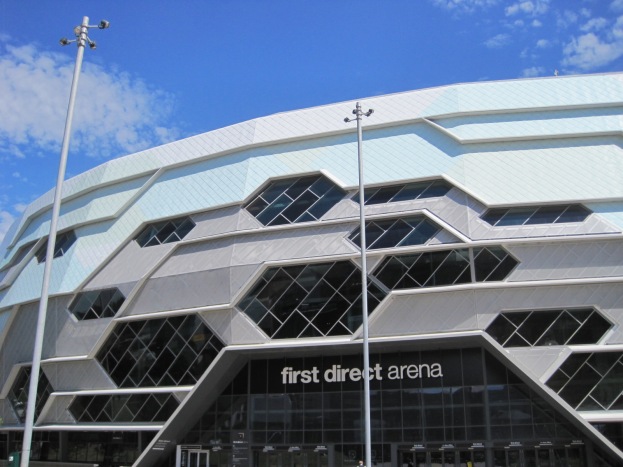 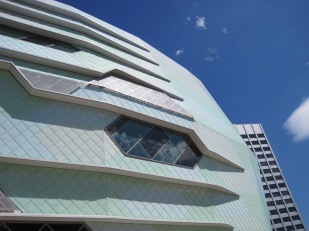 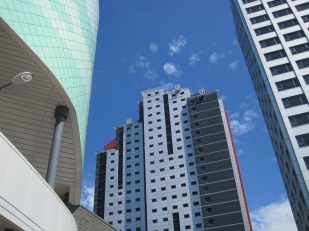 But I can’t help hankering after the old.  I looked wistfully up at remnants of the old Leeds. 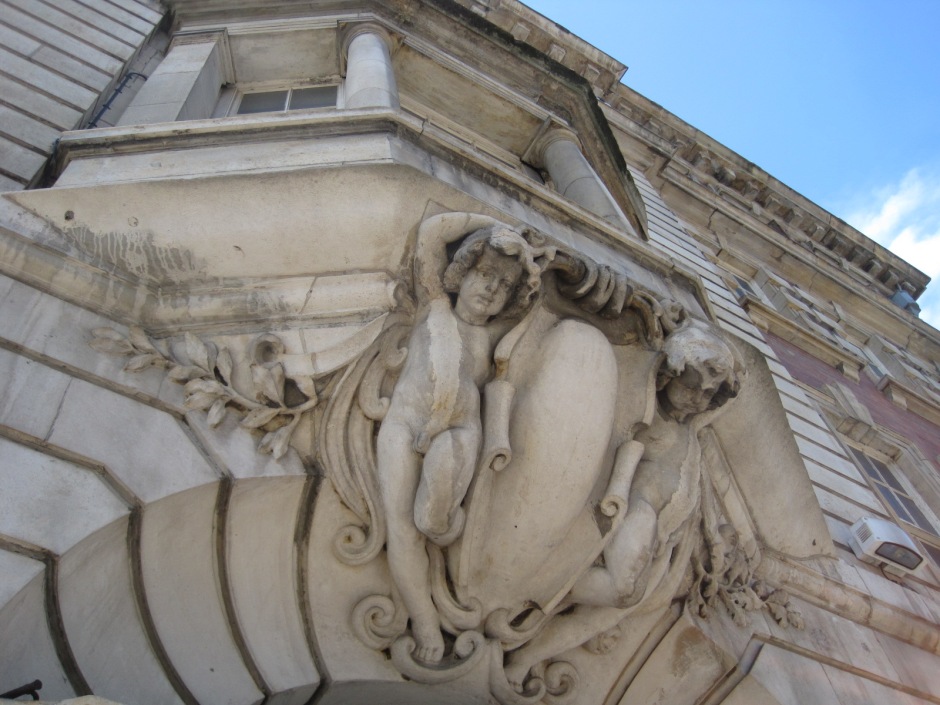 I do hope it will last!

So what did you make of Leeds?  A thriving modern city these days.  I hope that Dawn will enjoy adding it to her collection at A Lingering Look at windows.  This month she looks at windows that aren’t windows any more!