Looking down on the Great Hall

What finer place to start today than where I left off my tour of Castle Howard at Christmas, in the Great Hall?  The fire was roaring in the grate, and it needed to be, to heat this vast space.   I had completely forgotten the chill outdoors, in the sumptuousness of my surroundings.  Looking up at the dome, I could only marvel at the skill and resourcefulness that had repaired the enormous damage done by the 1940 fire.

The story of the fire and the Brideshead connection are the subjects of the exhibition in High Saloon, where my tour takes us next.  These rooms were completely destroyed in the fire, including painted frescoes by Pellegrini from 1709. New joists and flooring were installed in the 1970s, but the interiors were still burnt-out shells in 2007.  It was maybe a stroke of genius to turn these rooms into a film set for the filming of Evelyn Waugh’s novel Brideshead Revisited.  In 1981 and again in 2008, Castle Howard became Brideshead, with a cast of stars.

The casting for the dome fresco

Castle Howard has been used for a number of film productions, the most recent of which was Death comes to Pemberley in 2014.  Is it really any wonder?

Such an opulent dining room 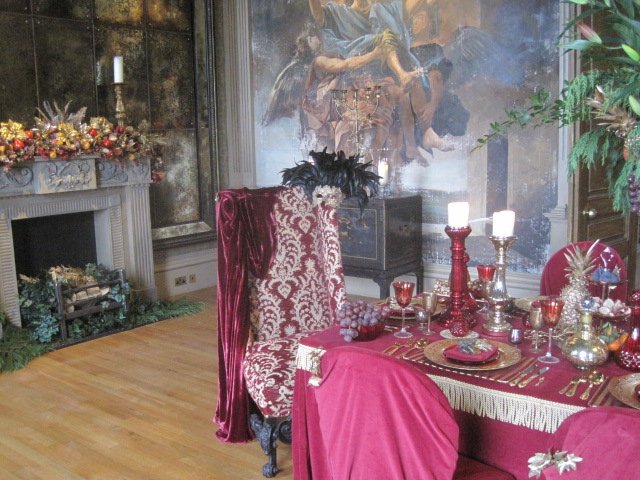 And what a table setting!

A room recently opened for viewing by the public is the New Library, formerly the Canaletto Room, which also was destroyed by the fire.  Books have been collected on every conceivable subject relating to the estate, creating a warm and welcoming space. 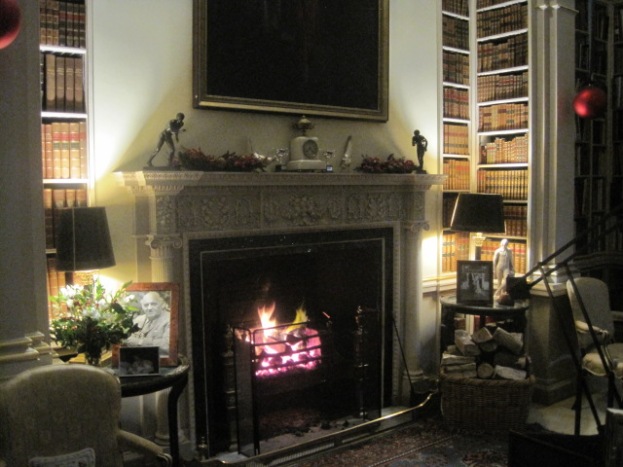 Everything for the good Victorian child appears to be the theme of the next room.  See any old favourites?  Ooh, that rocking horse, please!

The Doll’s House is truly life-sized

Can you see inside?

A train set, of course!

A rocking horse or a bear?

Nor have the adults been knowingly neglected.

And a Crimson Dining Room

With another roaring fire

But the Turquoise Drawing Room is rather a favourite

With a duck and a mince pie

And a wonderful swag of curtain 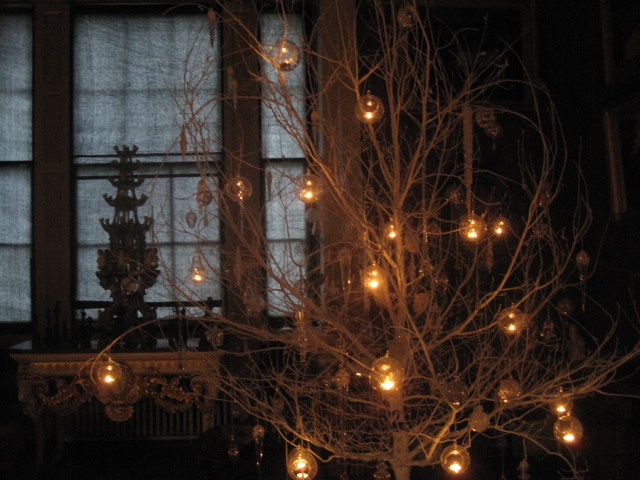 And how hard is it to pick your favourite tree?

I think we’re not too far from the end.  The Long Gallery comes next, 160 feet long, with an Octagon lined with books as its centrepiece.  Today a cellist is playing Christmas tunes. 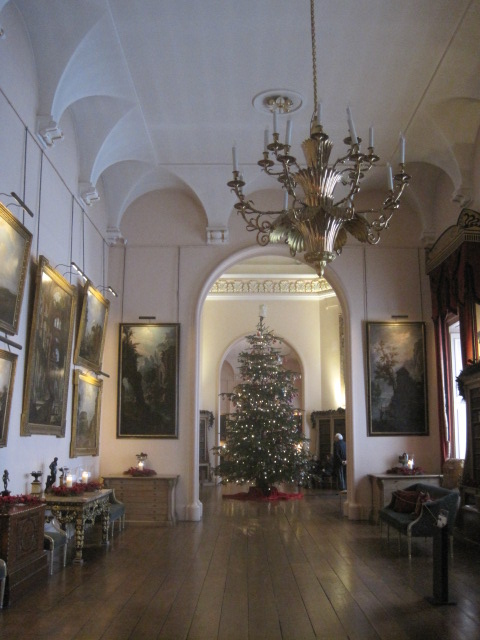 With the Octagon at its centre

The most exquisite furnishings

And the prettiest baubles on the tree

Just a little venture into the Chapel, then I think we can go home.  Originally intended to be a dining room (another one!), in the 1870s the floor was lowered, a new entrance created and the now chapel was redecorated in the pre-Raphaelite style.  The Howard family were patrons of William Morris, and one of his works was a stained glass window for a nearby Reformatory. This has long since closed and the window is currently on loan to Castle Howard.

I expect your eyes are tired of looking now.  Mine are, just a little, but I’ve so enjoyed putting together my experience of Castle Howard at Christmas.  I hope you’ve enjoyed it too.  The website is full of details and photographs and I’ve included a few links, in case you’re interested.

Last year I went to Chatsworth House in Derbyshire at Christmas time, and the two stately homes have much in common.  Both have hosted film crews for Brideshead and other period dramas. Where Chatsworth enthrals with its grand themes, Castle Howard seduces with a very traditional Christmas.  I have to say that I like both.  How about you?