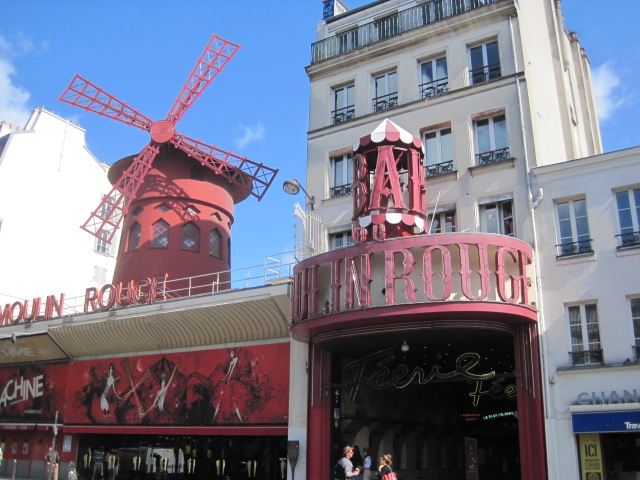 Where else but the Moulin Rouge?

Whenever I visit a new city I like to take a guided walk with a local.  You might remember that in Barcelona I accompanied Aleksandra on an eye-opening tour of the old side.  Paris was no exception.

A couple of my blogging friends are Paris experts and Lucy at On the Luce has a great post on which I spotted Discover Walks.  I was tempted by several of the choices, and so it was that, last Monday, I met Olivier.  A personable and very charming 20 year old, I knew at the outset that I was going to enjoy my walk.  And it was free, apart from a tip!

We met outside Blanche Metro station, at Place Pigalle, looking directly at that Paris icon, the Moulin Rouge.  There was quite a big group of us.  Why don’t you tag along?  I promise not to give away the best stories.  You’ll have to join Olivier for those.  I should warn you that this area is very steep, but we’ll take it slowly and pause to admire the views. 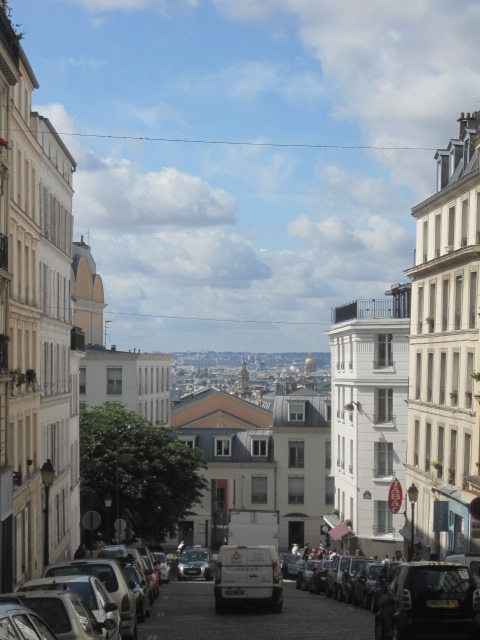 With all of Paris at our feet!

We started off up Rue Lepic- a street full of shops and locals.  It was tempting to linger over some of the pastries on display, but I hoped there would be time for them later.  For now, I wanted to absorb all that Montmartre has to offer.  Originally a village, outside of the city walls, the name Montmartre derives from martyrs who once were tortured and died on this hill.  Despite being incorporated into the city of Paris in 1860, Montmartre retains a strong identity and almost a village feeling.  It’s a community to which you would love to belong.

Olivier carried with him a satchel full of goodies and it wasn’t long before he was delving in. Outside Bateau-Lavoir, on tiny Place Emile-Goudeau, he produced a copy of a painting.  In this former piano factory, in 1907, Picasso painted his Cubist ‘Les Demoiselles d’Avignon’; a portrayal of 5 naked prostitutes, outrageous for its time.  No longer is there evidence of the squalid conditions he and his compatriots lived in, as the building has since burned down.  A replica currently marks the spot.

In Rue d’Orchampt, the tragic story of beautiful Dalida

And the ill-fated building where she met her end

A sample of modern artwork in the nearby passage

Artists and their haunts abound in Montmartre.  Dalida was unlucky in love.  After the suicides of three of her lovers she finally committed suicide herself.  A beautiful home isn’t everything, is it?

Around the corner another copy of a painting emerged from Olivier’s satchel.  Enthralled I looked at the windmills Van Gogh had painted, in their surrounding fields.  His countryside setting was nothing like that before me.  Once Montmartre had more than 30 windmills, used for grinding wheat and pressing grapes.  Now just two remain.  At the junction of rues Lepic and Tholoze, Moulin de la Galette is one of them.  A Michelin starred restaurant, it’s definitely a sign of the times.

Later, in the Musee d’Orsay, I was to stare wide-eyed at Renoir’s immortalisation of the windmill in ‘Le Bal du Moulin de la Galette’, so beautiful in closeup.  I can only manage a photograph.

A seat on the terrace should give you the nicest views

Our next introduction was to a gentleman by the name of Marcel Aymé.  Have you heard of ‘The Man who walked through walls’?  No, neither had I, but there he was, protruding from the wall!  I gather that he haunts Rue Norvins by night- a good reason not to loiter. 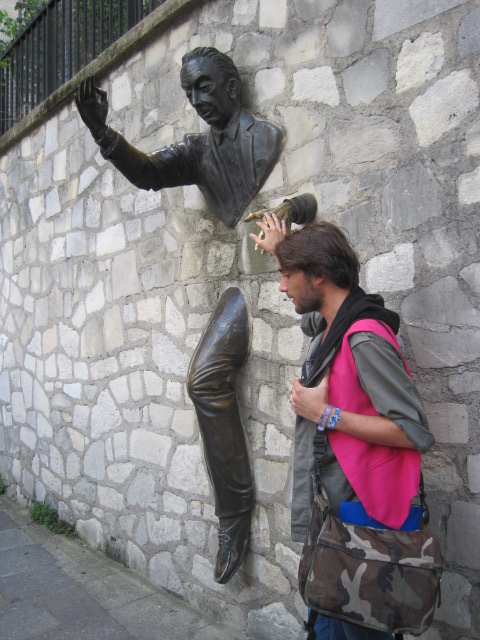 Olivier with Dutilleul, the ‘hero’ of the book

A look at the Montmartre vineyard was to follow, but with strict instructions not to buy the product.  Pollution levels in Paris are apparently not conducive to producing fine wine.

And down the hill,  ‘Au Lapin Agile’- the nimble rabbit- a cabaret spot

It’s a green and leafy space where you can hear the birds sing.  It’s not until you start to approach the monumental church that things begin to get busy.  I could happily wander these quiet back streets but inevitably you are drawn to Place du Tertre, where all of life spills over.

Approaching Sacre Coeur from the rear

A quiet drink on the way? 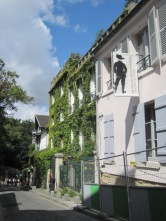 Or a visit to the Musee de Montmartre?

Not for us the crush of the main square.  We pass through peaceful gardens and emerge behind Sacre Coeur, where Olivier shares a final few tips and bids us ‘adieu’.  A job well done!  Merci! 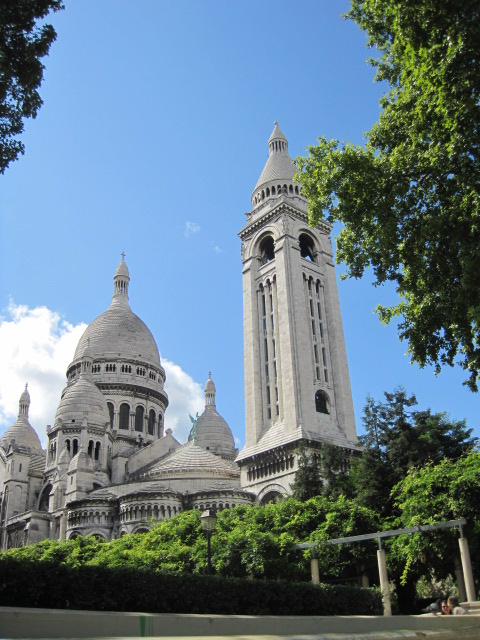 Sacre Coeur from the gardens at the rear

You know where I’m going next, don’t you?  But first let’s have a quick peek at Place du Tertre.

Such a pretty square

And full of beautiful art work

Too many people for me!  I’m heading right for the top.  I figure with all that practise up four flights of stairs to our apartment, 300 steps will be a piece of cake?

The church doorway, but I wasn’t allowed to take photos inside 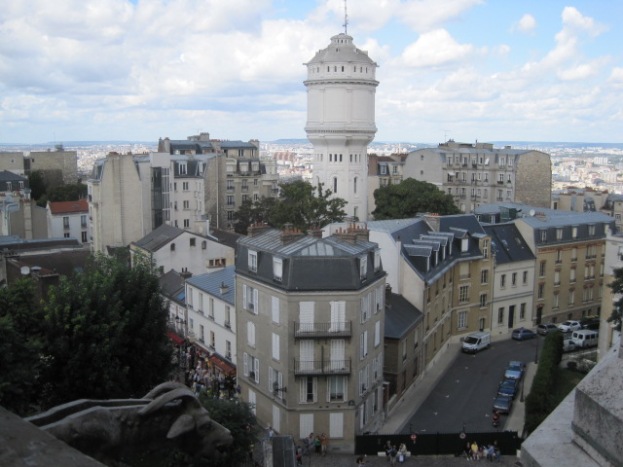 Up close and personal with a gargoyle first

A bit of a rest stop

Still a long way down

I’ll focus on a close up

I never did make it to La Defense! 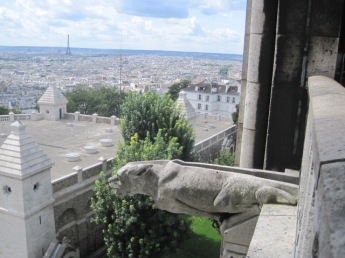 But I was on good terms with the gargoyles!

Are you worn out now?  You didn’t have to climb all those steps with me!  My legs are a bit jelly, too.  I hope you enjoyed my Paris walk.  Back down is simple.  Just meander!  Many thanks to Olivier for his delightful assistance.

I turned my back for 5 minutes this week and you walkers took off at a pace!  Please make some time to read these.  There are some superb walks here.  Put your feet up and enjoy! (and then start walking)  Click on my Monday walks logo to find out more.

And Jude was in her beloved Cornwall  :

Madhu made me sad with her wistful haveli photos  :

Lucknow- a walk in the Chowk

And Pauline introduced me to a pretty section of Canberra  :

While Amy was out chasing beautiful butterflies  :

The definitive London walk- you won’t want to miss it!  :

A glorious Summer’s day in London

And by way of complete contrast, Sue has us dangling in wide open spaces  :

Not quite so reckless but another lover of the great outdoors, join Suzan on a bear adventure  :

Close encounters of the Bear kind

Right back to London, Laura shows us a side that tourists seldom see  :

I thought I was eating choux pastry with Jude.  It must have been those steps!

And finally my lovely Viveka in Vienna.  You will never have taken a finer tour!  :

Happy walking all!  See you next week.