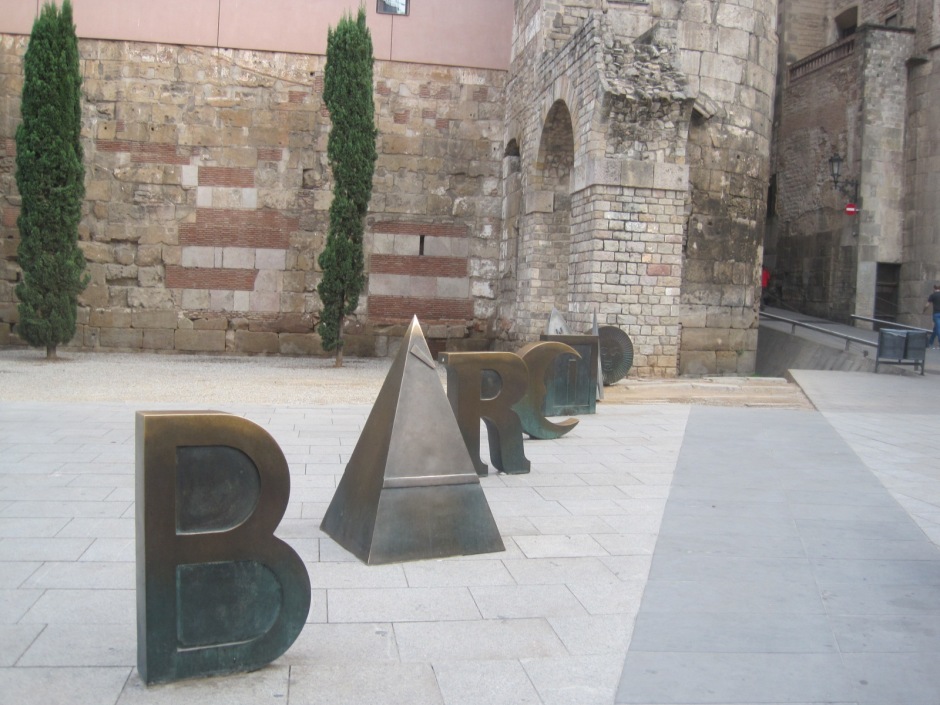 The letters spell Barcino, the Roman name for Barcelona

Something I love to do, in a new city, is to find a local to take me on a guided walk.  I did this very successfully in Porto, where I first came upon the concept of free guided walking tours.  Although I avidly read the guide books before I go, trying to see everything with your nose glued to a book is no way to experience a city.

Nor am I known for my sense of direction. (I’m the one on the street corner, turning the map around and around, with a puzzled expression on my face) So I was more than happy to meet with Aleksandra, on the steps of La Seu (Cathedral) of Barcelona, for a tour of the Gothic Quarter.  A slim, dark-haired young woman, she wore the promised orange vest till we were all assembled, a group of about 10. This included a young Russian couple from Moscow, and an American with his British partner and children.

Aleksandra is originally from Bosnia, but was brought up in Australia, and had spent the past 5 years living in Barcelona.  Her love of this “crazy city” is evident.  Swiftly we dived into the history of Barcino, as it was named by the Romans, and then we were off through the winding maze of streets.

Within the city walls, I looked up.

The sky was grey and a little threatening, but I was determined not to have my enthusiasm for Barcelona dampened.  Solid slabs of grey wall enclosed me, and then a fairytale “bridge of sighs” appeared overhead.  I seemed to be constantly looking up, even when we delved deep into the amazingly preserved 2000 year old Roman Temple of Augustus.  I had read about this, but doubt I would have found it on my own.

The ancient Roman Temple of Augustus

We were treated to tales of Wilfred the Hairy, and the significance of the national flag was explained, with it’s 4 red stripes of “blood”.  Casa de l’Arcadia, the Archdeacon’s House, had the prettiest little courtyard, and a legendary postbox.  Placa de Sant Felip Neri was a peaceful spot, disturbed only by its trickling fountain, but the bullet wounds in the walls of the church told a different story.  And then there was the brutal tale of poor 13 year old Eulalia, Patron Saint of Barcelona.  Being rolled down the street in a barrel of knives was just one of the misfortunes which took her to a gruesome early death for her faith.

Wilfred the Hairy, and Jordi, fighting the dragon

The Archdeacon’s letterbox- stroke the turtle for luck!

One of many colourful squares

The shrine to Santa Eulalia

I hope you can tell that I was not bored throughout the walk, and I hope not to bore you.  Placa Reial, with its famous Gaudi lampposts, I could certainly have found on my own, but I thoroughly enjoyed Aleksandra’s take on the city.  Especially I liked the Placa del Rei, the King’s Square, with its imposing medieval architecture.

We ended up back at the Cathedral steps, and were given a list of Aleksandra’s recommendations of places to eat and drink.  Some had been pointed out to us en route, and I knew that a beeline was going to be made for Caelum’s cake shop.  Myself I had a date with El Quatre Gats, imagining Picasso sketching in a back room.  And then a tour of the spectacular Palau de Musica Catalan.

If you find yourself in Barcelona in the near future, I wouldn’t hesitate to recommend Orange Donut Tours.  The link will take you to Aleksandra’s website, and she also has a Facebook page.  You can tip her as much, or as little, as you like, once the tour is over.  Me, I wish I was starting it all over again!