Don’t worry, I’m not about to burst into song.  Well, I might, but you won’t have to listen.  This is simply my entry for the Travel Your Way photography competition being hosted by Rhino Carhire.  Lovely Lucy nominated me.  She’s on holiday in Portugal right now, recovering from her honeymoon.

I have to post four shots (or more!) depicting travel by air, sea, road and rail.

I have to admit to being one of those people who sit with their nose pressed to the window on a flight.  Kindles and iPads are wasted on me, though I could do with a large map upon my knee.  I’m forever trying to work out which bit of coastline or land mass I’m flying over, while all around me people snore or follow the plot of the latest thriller.  The balls of fluff below and the occasional snowclad peak are all the thrill I need.

The photo above is one of many taken on the journey back to the UK from the Algarve.  Well- you recognised it, didn’t you?  The sun was just setting, touching the lakes with flame.

Impossible to capture the boating experience on Portugal’s beautiful Douro with just one photo.  The traditional way of transporting the barrels of port, the winding and weaving river, the terraces of vines- all combined to give me the experience of a lifetime on board with Tomasz do Douro.

Yet still remembered on our dining room wall 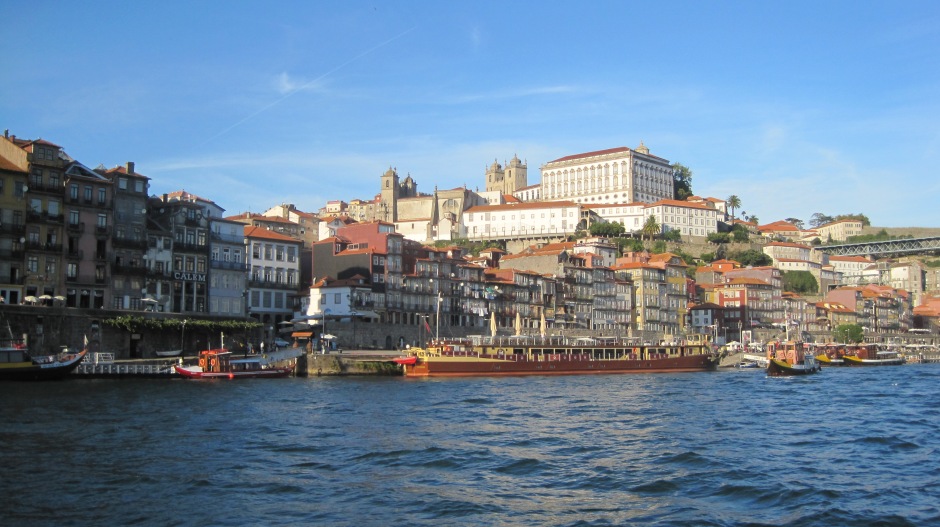 And culminating in beautiful Porto.

Road trips for me usually mean a few days outing from our Algarve home, and always, always result in a lot of walking.  One of my favourite places, ever, was the Spanish city of Cordoba.  We started off on the embankment with this alluring view.

The sky was mean and moody but the sun shone

A place to rest the feet- the lovely gardens of the Alcazhar.

I love everything about travelling by rail, from the clickety-clack of the tracks to a belch of steam on the North York Moors.  I thought that I would probably post a shot of the wonderfully restored and nurtured steam engines, idling on the platform at Grosmont or Goathland.  But in the end I opted for a tram shot.  Nothing quite beats the thrill of these sleek beauties, chugging up and down inclines in Lisbon, and probably my favourite ride- along the shoreline of the Foz do Douro in Porto.

The tram trundles past Foz do Douro

Fortunately for me the deadline on this competition was extended to 31st October or I would never have made the cut, so many thanks to Rhino Carhire for that.  It just remains for me to nominate 5 people who could use a spare £1000 for travel.  And quickly!

Bespoke Traveler has some great tales to tell, and some great shots to go with them.

Hope, the happy hugger – how lovely a name is that?  I’ve just been looking at some stunning bougainvilea shots on her page.

My guilty pleasures  Viveka?  Well you ALL know what a treasure she is.  She’s already got me singing on this grey English day.

Dear Bliary has been one of my favourite blogs for a long time.  Innovation is Gemma’s middle name.  Or was it Marie?

Janalines world journey is a terrific read.  I just hope she has time to take part.

You don’t need a nomination to join in, so if I’ve missed anyone who was desperate to be there, please don’t hesitate.

Hope you enjoyed travelling along with me.  Did you sing?