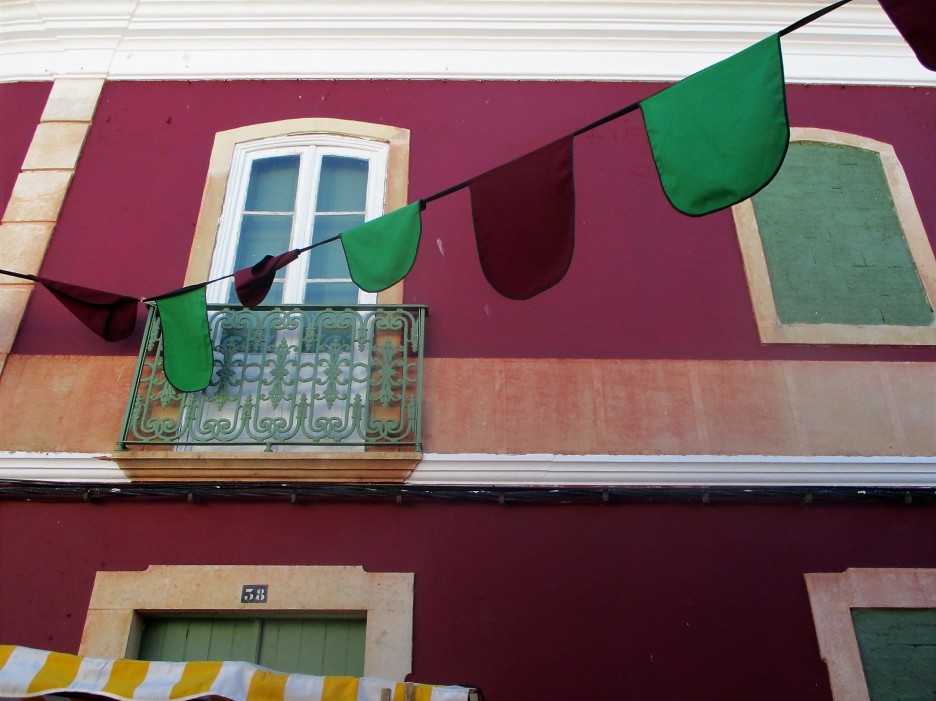 It seemed a strange time of year to have a Medieval Fair, and curiosity drew me to Paderne.  It’s another of those small Algarve villages that punches above its weight when it comes to the grand occasion.  It was a lovely day for a drive out into the countryside, so off we went, arriving unfashionably early.  Later we were glad that we had done, as parking became extremely fraught.  As it was, we had the streets almost to ourselves as we browsed the stalls, smiling and exclaiming at the range of goods.  Who to buy a hobby horse for, or maybe a many-legged puppet?

I was so busy looking that I scarcely noticed the beating of drums until the procession was almost upon me.  A curtsey may well have been in order, for I was swept contemptuously aside by an imperious lord.  Amends were made when a handsome knight stooped to kiss my hand, covering me with confusion.  Suitably embarrassed, I stepped back to watch the parade. 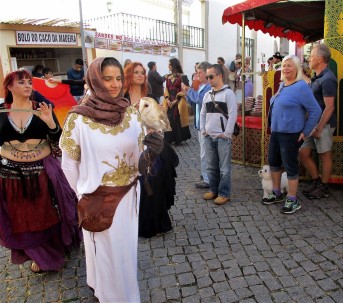 Drums beat and pipes skirled as they swayed towards me.  A lady with an enigmatic smile carried an unblinking owl, and another conjured with a crystal ball.  In a small square a stage had been set up, and here the entertainment began.  His Lordship welcomed the assembled crowd, many of whom were busy feasting at trestle tables.  The aroma of roasting meat filled the air, as dancing girls twirled voluptuously and masked drummers kept up the steady beat.  An accomplished violinist expertly filled any gaps. 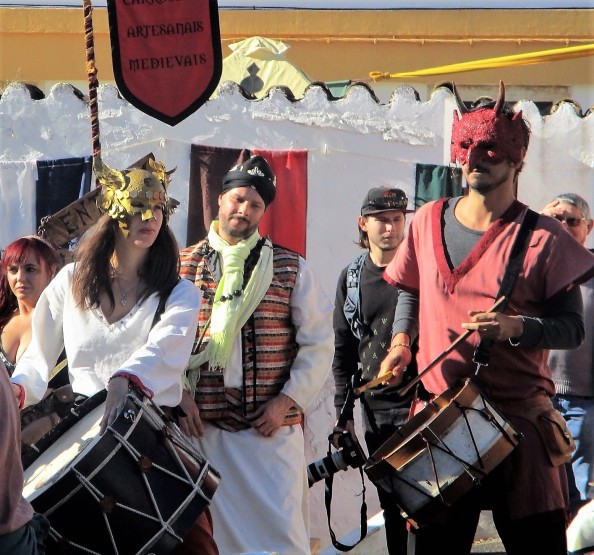 The “village lasses” laughed and teased each other, flirting outrageously to the disgust of their “elders and betters”, who tried to shoo them away.

Next the turn of the pipe band, who blew up a storm before leading the procession off to another venue, by the church steps.  We followed, in search of refreshment, and were surprised to find camera crews setting up, and a young lady conducting interviews.  Time to move on.

The streets were colourfully attired, both for Christmas and the Fair, with traditional nuts, seeds and dried fruits stacked high on stalls. 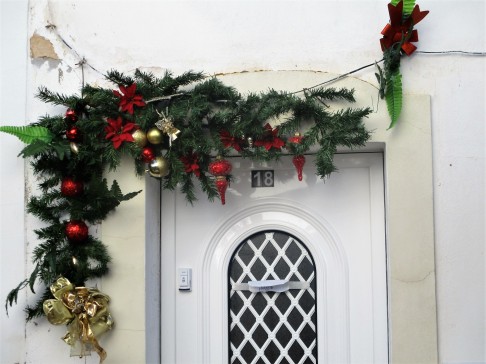 In a quiet moment we slipped inside the church, where a simple crib scene had been set up in front of the altar.

A naive Presépio (Nativity scene) presided in a tiny hall opposite the church, and around the corner a donkey waited patiently in his stable. 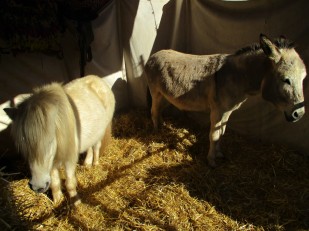 There was little pause in the revelry and, wherever you lingered, you’d find your toes tapping to a constant rhythm.  No-one had been left out, with games and ‘medieval’ rides for the children and armed combat for their seniors. 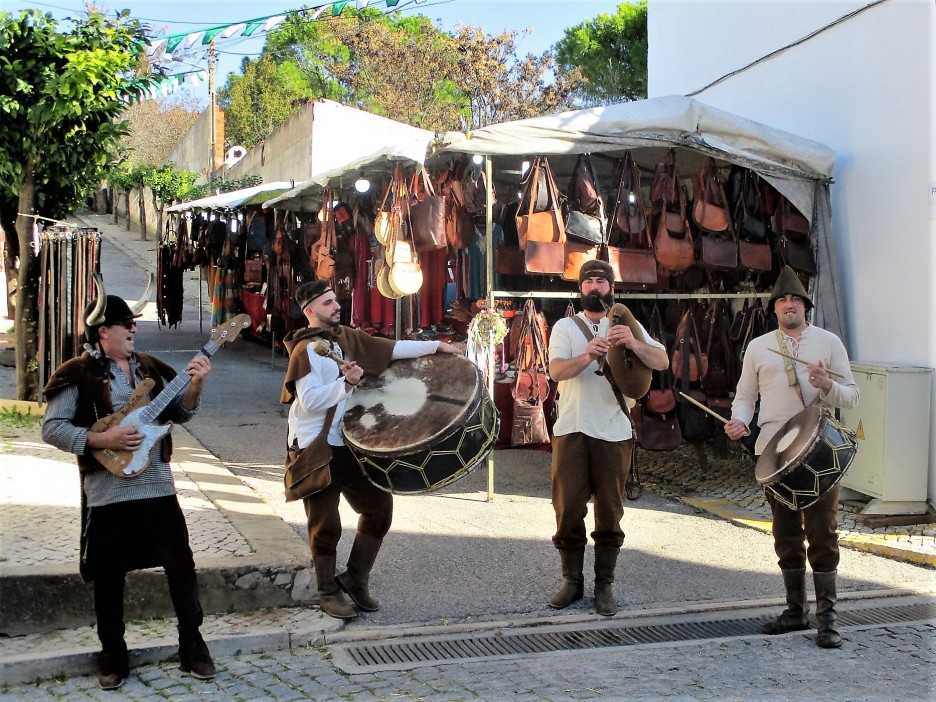 Not forgetting the sinuously swaying lady with the veil.  All eyes were drawn to her swivelling hips and dainty feet, up on the stage.

Reluctantly we made our way out of the village for, soon after three in the afternoon, crowds were beginning to gather.  A main stage outside of the Medieval Fair provided boisterous entertainment with a more modern flavour.  I know which I preferred. 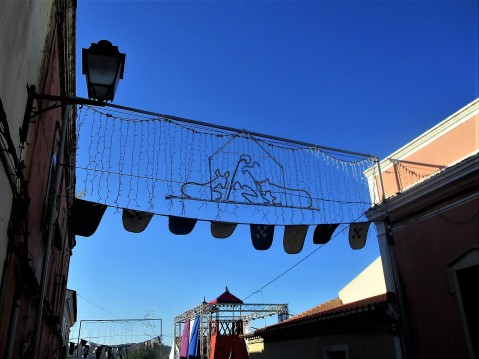 I’d like to add this post to Cathy’s beautiful Photography Invitation.  My intention was to capture the atmosphere of the fair in photos.

No cake but we’ve over-indulged lately, wouldn’t you say?  And dried fruit must be a healthier option.  Many thanks to you all for wandering along with me.  Please find a little time to visit the good folk below.  And join me next time, here on Jo’s Monday walk?

How about this for a brilliant idea?  Debbie knows I can only draw Stick Men  😦

An artistic walk in Milan

A distant deer is better than no deer, isn’t it, Janet?

Street art!  Sandra wonders how you feel about it :

Dark side of humanity

Take a step or two back in time with Anne :

Or an autumnal birthday jaunt, with Cathy :

Celebrating a birthday at Mary’s Rock

And lastly, a nice young man I’d like you to meet :

That’s it for another week.  Hope you enjoyed it.  Take care, and I’ll see you soon!