I’ve done and seen some wonderful things down the years, but I never had any thought that I could walk on water!  For one thing, I’ve never worn a halo.  Water wings would be more useful.  Nevertheless, last Saturday I found myself joining a queue to walk across the River Guadiana- a distance of approximately 720 metres- from Alcoutim, on the Portuguese side, to Sanlucar de Guadiana, in Spain.

Alcoutim is normally a sleepy little place and, over on the far shore, the enticing white village of Sanlucar is even quieter. If you have any desire to cross the river, you first have to summon a ferryman, who may or may not be located somewhere near his craft, but will always greet you with a friendly smile.  Not so on this occasion.  The ‘Festival do Contrabando’ was in full swing and, even as I walked down towards the river, I could hear the hubbub of the crowd.

Entertainment was in full swing, with a feisty matador swinging his cape at a ‘burro’ as the band played on, and the crowd cheered as clay pots were hurled through the air and skilfully caught.

This was not the Alcoutim I knew!  I eased through the crowd to the ‘ticket office’, where I purchased the mandatory bandana, for my admission fee of 1 euro.  I joined the queue to cross the river, wondering at what rakish angle I should wear it, and why some were wearing red ones when the vast majority were blue, like mine.  Just then the washer ladies arrived, and I was scolded gently and treated to a rub with scented soap.  I obviously wasn’t clean enough to join the party. 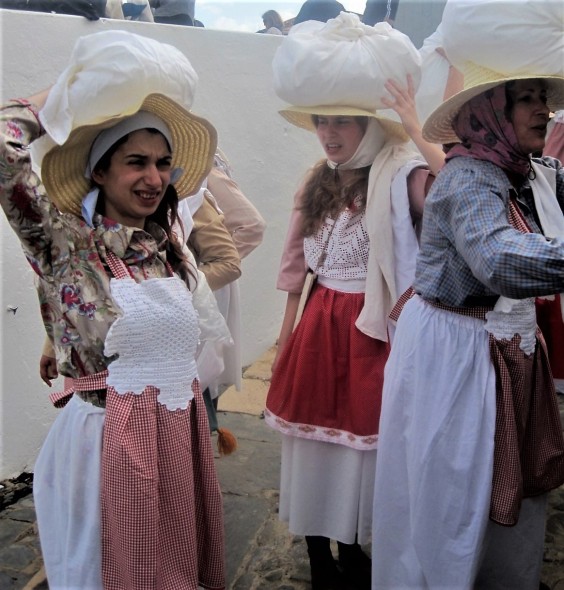 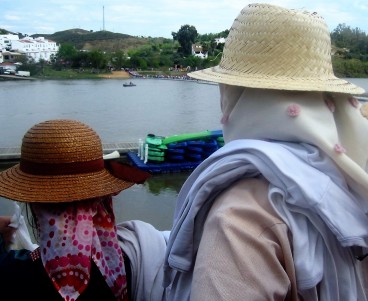 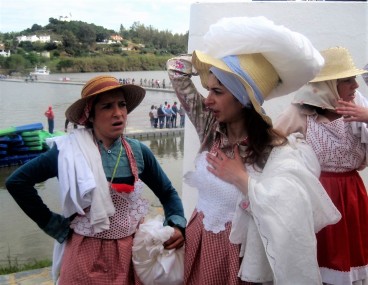 Slowly the queue shuffled forward, controlled by customs officers, of course.  The red bandana folk caught the ferry.  Maybe they had a pressing engagement in Spain.  I followed the washerwomen, laughing and calling out to each other as they flounced ahead.  The moment finally arrived and I stepped out onto the pontoon, trying not to look concerned as it wobbled.  What a bizarre sensation!  The river lapped gently all around me and I rolled slowly with its motion.  Gasps and giggles came from my partners in crime, as we staggered towards the middle of the river, not quite believing in what was happening.

Fortunately it was a calm day.  I think I might have felt a little seasick otherwise.  As it was I had assumed the rolling gait of the mariner by the time I reached dry land.  And a huge smile split my face.  I had walked on water!

Over in Sanlucar de Guadiana the antics continued.  Flamenco, involving the crowd and a very attractive ram.  A good time for all was guaranteed.  I wended my way past wondrous craft stalls to a quiet corner where I could survey the scene. 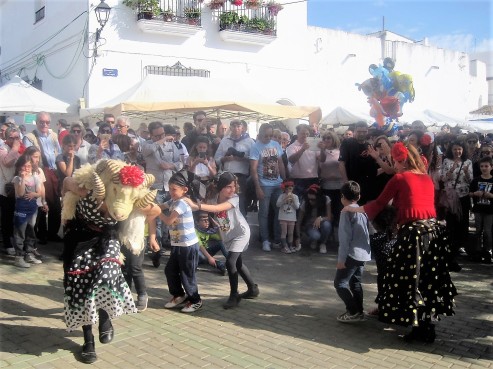 A mooch among the stalls and it was time to join the ever growing queue to return to the other side.  A few clouds had rolled in and there was talk of storms brewing, but fortunately the weather stayed clear and dry all weekend.  One last look back, and I’m home. 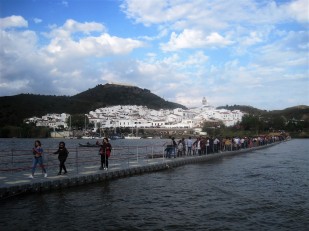 For a fuller account, including the story of the ‘last smuggler’, all of 97 years old, read Becky’s An unusual walk into Spain.  That’s it from me, as my son arrives tonight.  I’ll be back with a walk on Monday, 15th April.  Take good care till then!