Just how to convey a little of the joy I’ve shared in so many Polish weddings? (this was no. 5!) Each a little different, as times change and individuals make their choices, but essentially the same.  All full of laughter, smiles and a just little mischief.

On Saturday I was in Chorzów, a city in Poland’s industrial heartland.  This link to Wikipedia will satisfy those of you who might be curious.  For the others, it’s enough to mention a ‘Royal’ coal mine and iron works, and the adjoining city of Katowice.

Of course, we start at the church.  I failed dismally to get any good photos of the ceremony. I was even thwarted at the end when, instead of walking back up the aisle towards us, the happy couple departed via a side aisle.  But I have my memories, of the tinkling of bells, and the sun filtering through stained glass windows, bathing the altar and choristers in an amber glow.

My cousin Adam’s car had been spruced up for the occasion, and his son, Łukasz, became chauffeur for the day.  I love the Polish way of decorating wedding cars. 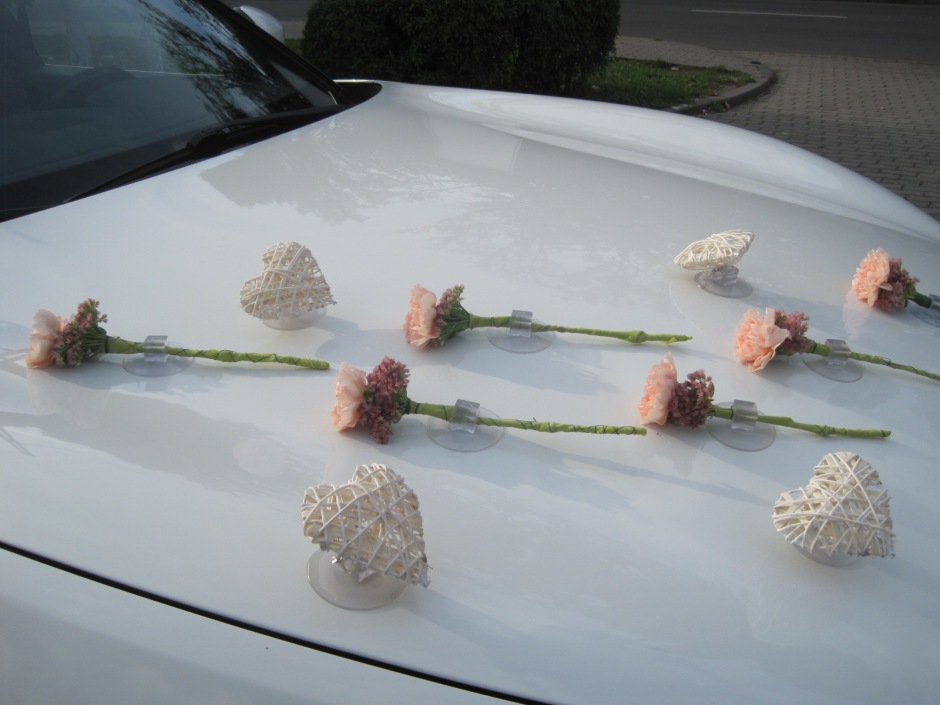 After the ceremony and the confetti, a cascade of coins pelted the ‘lucky’ couple, a symbol of future wealth.  That’s Łukasz, the chauffeur, standing by the wall with a box to collect up the cards of those not going to the reception.

Every last zloty has to be gathered up

We pile onto a bus and are driven to the reception.  The venue is a total surprise- Park Sląski, a 13 hectare reclamation project which has transformed the former slag heaps into an outdoor playground on a huge scale.  My jaw probably dropped at the sight of the cable cars gliding across the lake.  A friend of the groom later explained to me that the cars had just recently started operating, and that it was the intention to extend them to link the far corners of the park.  I would have loved the opportunity to explore a little further, but the day was all about a wedding, and we were deposited at the Marysin Dwor Park hotel to await Przemek and Magda. 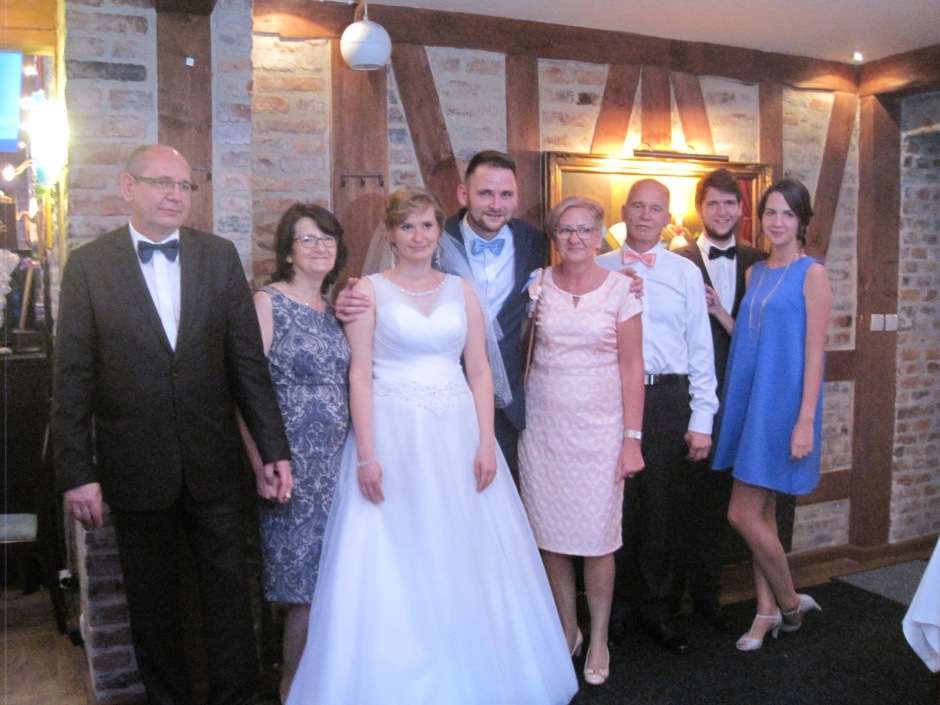 This is probably a good time to explain that the groom, Przemek, is the only child of my cousin Basia, sister to Adam, with whom many of you will be familiar.  Adam and Basia are the children of my beloved Aunt Anna, there with us in spirit only.  Above, left to right- Adam and his wonderful wife, Marta; the bride and groom; Basia and husband Zygmunt; Łukasz again and his younger sister, Ula. Weronika, his older sister, you may remember got married last May.  She and Wojtek were at home looking after their newborn.

On to the toasts, and then the newly weds threw the swiftly drained glasses over their shoulders and reached for brush and pan to sweep up the mess.  A nice domestic beginning to married life. 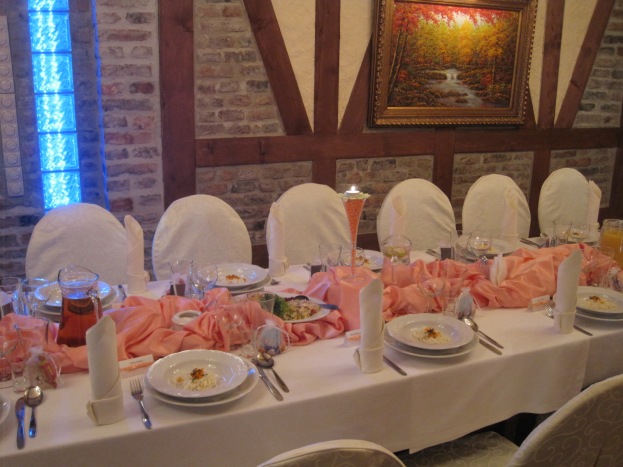 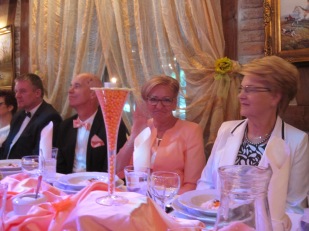 Basia and Zygmunt settling in

Containing a fridge magnet and a chocolate 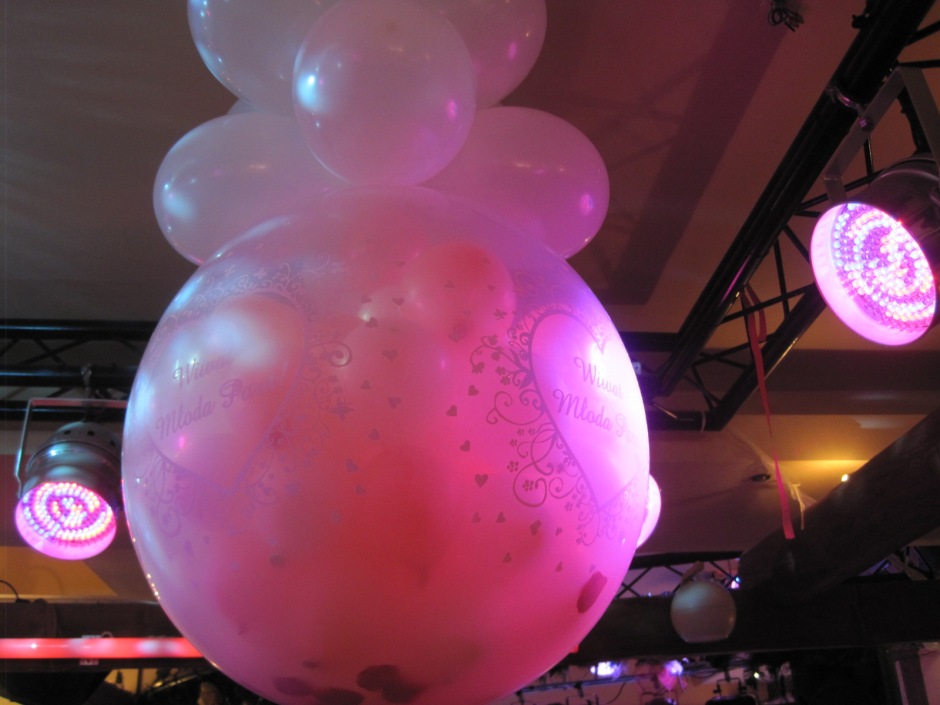 A little eating, a romantic first dance, a chorus of ‘Sto lat'(100 years)and noisy demands for the couple to kiss, then it’s time for the d-jay to get folks to mingle.  And they don’t need much encouragement!  Before long we are all hop-skip-stomping gleefully to a combination of Polish and English pop songs.  Till the cake makes it’s flaming entry.

A hush and dimmed lights

And then cutting the cake

The bride and groom set about their task of dancing with every single guest, after we’ve consumed vast quantities of food, toasted the whole world ‘Na zdrowia!’ (good health), and watched a humorous video of the couple’s respective childhoods and meeting.

The balloons are burst 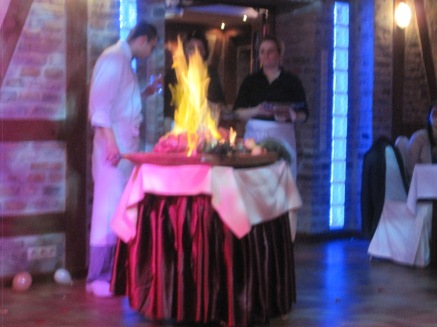 The whole roast pig is flambeed

And the games begin!

The night passes in a whirl of dancing, and even Dad manages a little soft shoe shuffle with his stick.  When we finally leave to return to our hotel, it’s to discover another wedding reception still in full swing there.  A wall of joyful sound hits us.

Dad, with my Uncle Wlodek and his lovely lady Weronika

If you’re not familiar with Dad’s story you can read about it here.