As the sea of humanity surged past me up the platform, I had to wonder just how much I was going to enjoy the experience of Versailles .  The 7 million yearly visitors couldn’t all be wrong, but I’d had the impression that at least half of them had been on the train with me!

I had crisscrossed Paris to join the RER train to Versailles-Rive Gauche on line C5, at Javel Metro station.  Standing on the platform, with a twitch of anticipation, I could see the Eiffel Tower looming in the distance as I watched for the approach of my double decker train.  This was to have been a first- a ride upstairs on a train- but it was not to be!  When the train pulled in, it was already full to sufficiency, and I had to spend the journey leaning up against a swaying wall.  Just a little deflated, I had 30 minutes in which to wonder whether Versailles could possibly hold this volume of people.

Arriving at the palace gates, I felt hugely relieved that I ‘d had the foresight to book tickets for the gardens online.  The queues were immense, but following the signs to the right, I slipped peacefully past the ticket barrier and into the empty gardens.  No queue!  This might not be so bad, after all.  The day was rather overcast, but I had 20 minutes to explore before the fountains were turned on at 11.00am. 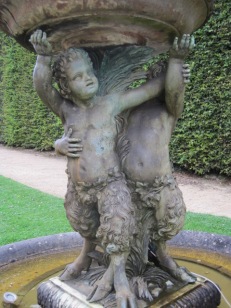 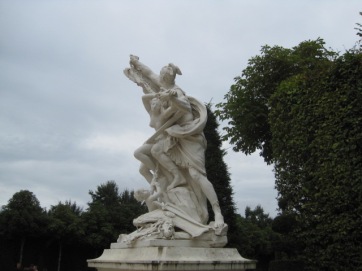 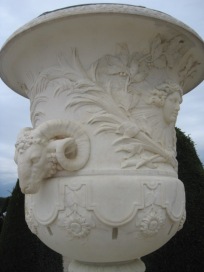 And a few more cherubs!

There wasn’t any question that this place was built to impress, and impress it did!  I felt a thrill of excitement as the fountains began to trickle.  In a few moments my cherubs were magically clothed in a veil of water.

A gentleman with a large ‘key’ made his way around the gardens, in an unhurried fashion, turning on the fountains in sequence.  The race was on to visit as many of the garden rooms as possible before the fountains stopped again at 12.00.

Laying down on the job? 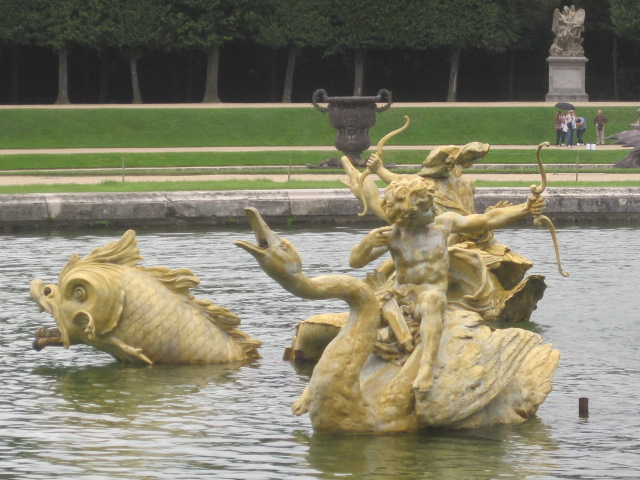 You might have noticed the odd umbrella in the background.  A light drizzle had started to fall.  With just a few minutes till the fountains ceased playing, it was time to consider food and shelter.  As the skies suddenly opened, instant decision was required and ‘La Flotille’ was the nearest port in a storm.  With my back to the burners and the rain pouring off the awning, a Grand Marnier crepe and a pichet of Bordeaux helped to pass the time rather nicely.

Half an hour later, the sun made a welcome appearance.  A  couple of rowers were out on the Grand Canal, but a gentle stroll to the Grand Trianon seemed a better bet.  Dappled sunshine and puddles- such a nice combination!

Rowing boats on the Grand Canal 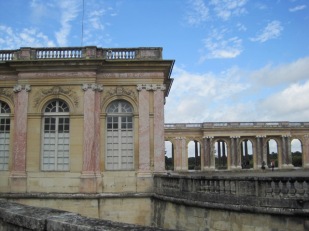 Courtyard of the Petit Trianon

If your legs are tired, take the bus!

There were still more garden rooms to visit and I had my favourites.  The Ballroom was landscaped by Le Notre in 1680 and is decorated with millstones and shells brought back from the Indian Ocean and the Red Sea by the French Navy of that time. 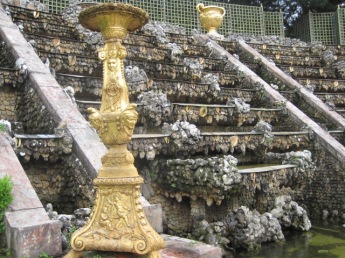 The Ballroom was particularly lovely 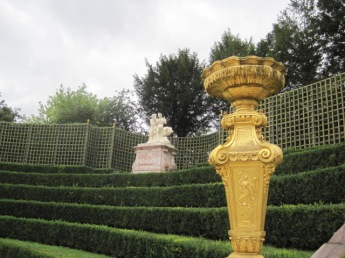 Urns and statues sharing the space 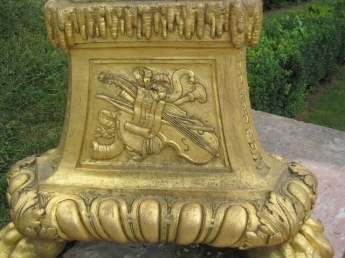 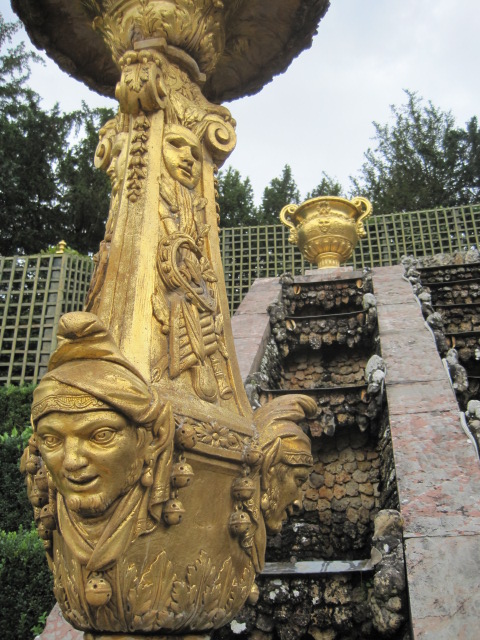 The Mirror Fountain was commissioned by Louis XIV in 1702.  It currently performs to music at 10 minute intervals all day long- the only fountain to do so.

Dancing to the music of Rameau and Lully

Climbing the steps back up to the Water Parterres, I could look down on the Orangerie in all its magnificence.  The clouds came and went but the beauty was endless.

The Orangerie, beautifully laid out 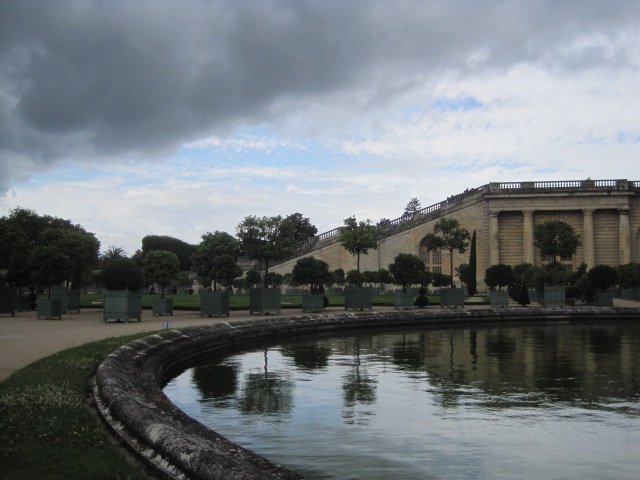 And with moody skies

I love the creatures on the urns

The grandeur of the Water Parterres 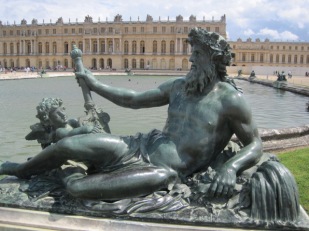 And with exquisite strength

850 hectares of parks and gardens means little to me, but I can tell you that it was huge, and absorbed all those people from my train with ease.  And many more!  The fountains play again from 15.30 to 17.00 and at 17.20 the grand finale of the Neptune Fountain.

On Saturday evenings throughout the Summer there is a Fountains Night Show.  What a spectacle that must be!  The Versailles website is a wealth of information and I could recommend a visit to anyone.  Because of the scale of the place a little disruption from renovation is inevitable and on my visit the Latona Parterre and Water Theatre Grove were unavailable.

Are you wondering about the Chateau?  I had made a conscious decision to limit my visit to the grounds.  I did not want to share the Hall of Mirrors and in August there would have been little choice.  Another day, maybe!

Versailles is chalk and cheese with my lovely Giverny, but there’s room for both in this world.  Don’t you think?