I couldn’t resist the theme of “messing about in boats” that is the basis of this week’s Quotes from the Masters challenge, designed by Robin of Bringing Europe Home.  This is a great idea, using quotes from celebrated authors to inspire.  Looking at Robin’s lead photograph, I think she may well have messed about in some of the same boats as me.

I’m going to take you back more than 20 years with this post, but I still can’t imagine that there is anywhere in the world more glorious than the Turkish coastline for messing about in boats.  It’s an idyll to me, with the bluest of seas and a flotilla of islands for drifting in between. 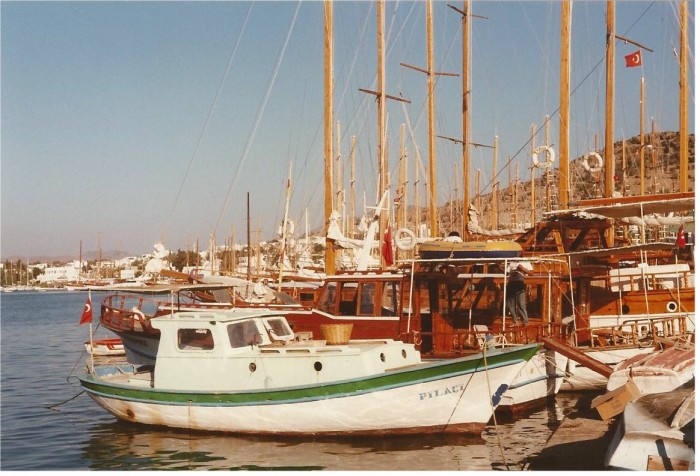 The holiday I have in mind was a bit of a gamble, in more ways than one.  Although I love water in all its forms, I’m not much of a swimmer, and totally lacking in confidence when out of my depth.  Yet I had in my head the image of a gulet, cruising in and out of beautiful bays.  I somehow convinced myself that I’d be game to go in over the side- such foolishness!

Despite being fairly gregarious by nature, I wasn’t entirely sure that a gulet full of people was quite the medium for me.  The potential for disaster was assuredly there.  Moaners, crashing bores- even worse, what if nobody liked me? (apart from the husband, and he was duty bound)  Still, those lovely images in my head persisted, and any reservations were firmly put away.   The booking was made almost a year ahead, but it was never part of the plan that I would be pregnant when we set sail!

In so many respects, I needn’t have worried.  I fell in love with the gulet, and as we sailed out of Bodrum, I was awed at the magnificence of my surroundings.  My fellow sailors proved to be a highly likeable bunch, (phew!) with many tales to tell, and none of them seemed particularly averse to me. (double phew!)  The 3 man crew were totally amazing.  They cooked, in the most minute of spaces, or occasionally on a beach, some of the most delicious food I have ever tasted.  They laughed and joked, and entertained us.  They manoeuvred our boat through some of the loveliest waters I have ever seen.

Of course there were hiccups!  It was enormously difficult to have a satisfactory hot shower in the confined space.  I was bitten on the bum by a huge flying insect, causing considerable consternation.  And you know that I never leapt bravely into the sparkling water, but clung like a limpet to the rope that anchored us in the bay. (despite the cumbersome lifejacket I was kitted out in) 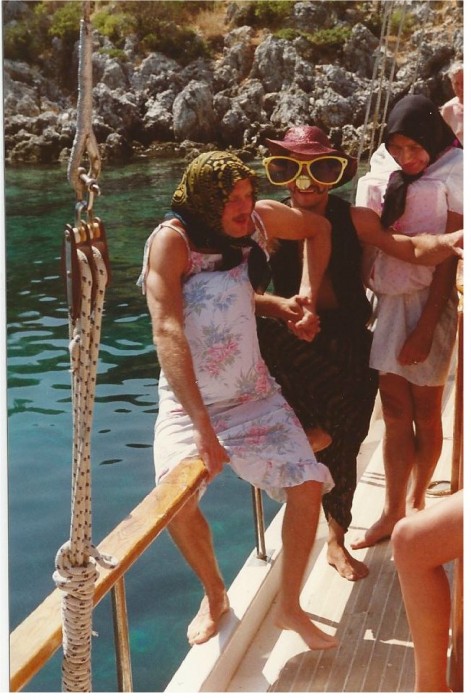 A salutary lesson on messing about in boats was taught, unwittingly, by the crew.  Dressed in drag, two of them capered around the deck, and then proceeded to “fall” into the water.  Unfortunately one of them cracked his head on the side, and was rowed to shore, bleeding and concussed.  Imagine our dismay when several hours later and heavily bandaged, he rejoined the boat, pronounced by the hospital “fit for duty”.  I expect he needed the money, but we made sure after that to proceed with care.

Thank you so much, Robin, for the opportunity to share this.  It’s a holiday that remains vivid in my memory.  The photos were taken by my husband on an old Brownie camera, but I make no apologies for that.  Looking forward to seeing what your next challenge brings.

Follow the link to Bringing Europe Home to join in, people.