Ok, it’s predictable I know, but how could I have a home in the Algarve and NOT love beaches?  There’s nothing I like better than an amble along the beach, picking up the occasional shell for the collection.  Flat, calm and twinkly in the sunlight, or raging and frothing, I love being beside the sea. 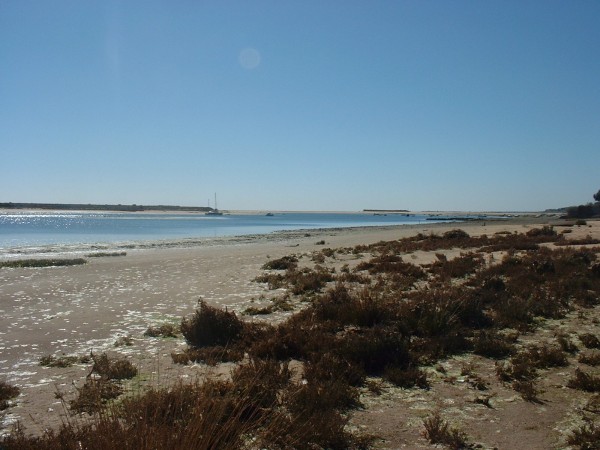 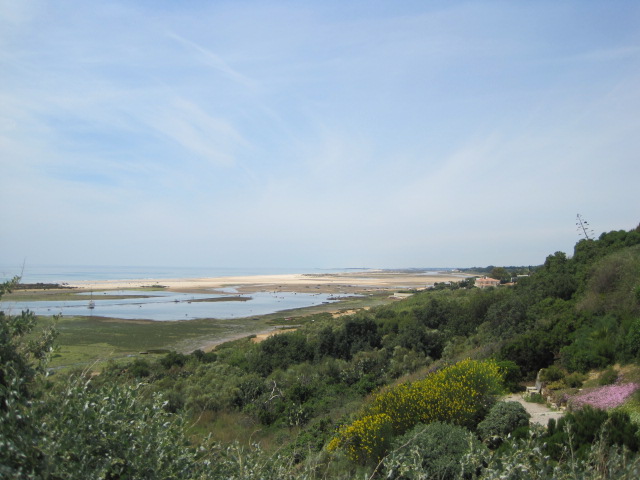 So where better than Portugal, with its wrap around beaches, north to south?  In theory I could walk the full length, starting off in my treasured Eastern Algarve.  Of course, I’d have to swim the odd river.  Perhaps I should take our inflatable dinghy with me- I’m not that much of a swimmer!  Think of the Podcam I could do, if, of course, I were skilled and steady-handed enough to point the video camera in the first place.

No.  Better to focus on my digital memories.  I’m starting in the east and going west, with a few impressions of the beaches that I love. 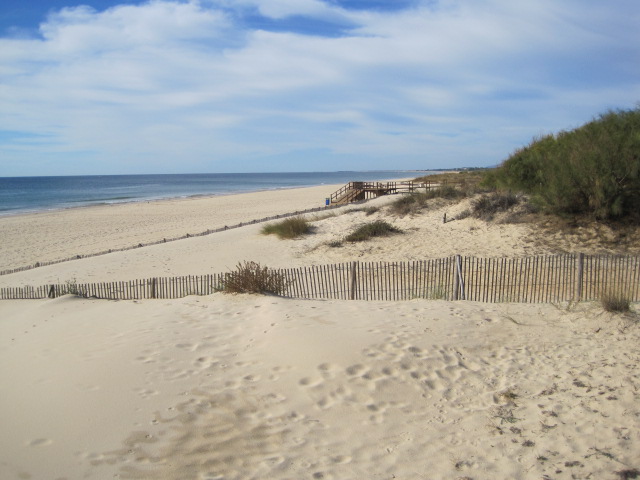 The beach at Praia Verde

Praia de Verde, not far from Monte Gordo, was one of the first beaches ever recommended to me.  The coast at the eastern end of the Algarve is quite flat so I was surprised at the drop down to the beach from what is essentially an upmarket holiday village.  The bay is beautifully shallow and I’ve seen some of the prettiest fish basking in the warm water.  One of the big attractions is the restaurant Pezhinos n’ Areia.  www.pezinhosnareia.com .  It was much more simple when we first visited and less expensive too, but I would still consider it for a special lunch. 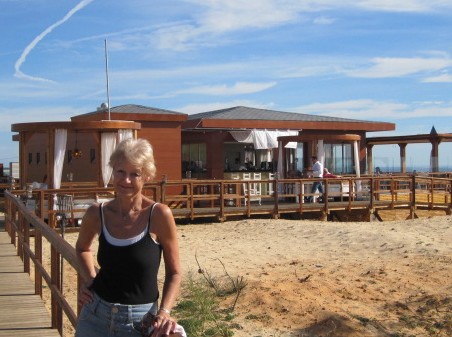 Of course, Tavira, my adopted home, can brag of a beach or two, but for the sake of brevity I’m going to refer you to an earlier post of mine.  https://restlessjo.wordpress.com/2011/10/20/impressions-of-an-eastern-algarve-shoreline/ 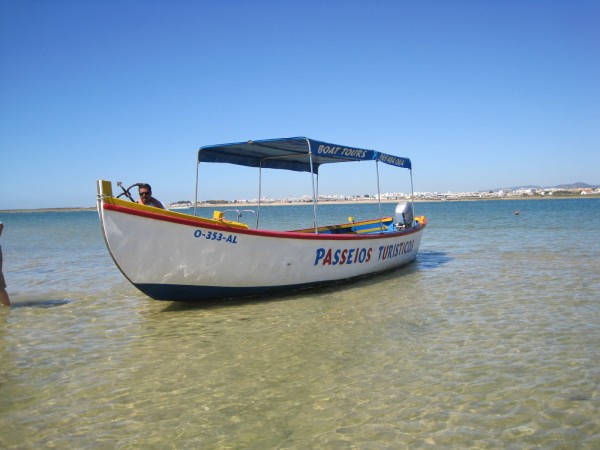 Armona  This island was a strong competitor for my first post, “A is for”.  It is unlike anywhere I’ve ever been before and I find it hugely charming.  It’s reached by ferry out of the fishing port, Olhao, though you can also visit from tiny Fuseta, such is the length of these offshore islands of the Ria Formosa.

A path wends away from the harbour through myriad dwellings, many of them holiday lets, but they have enormous character.  Driftwood and shells vie with the plants in the sandy front gardens.  As you peak down the narrow lanes between them you catch glimpses of the sea and any one of them will take you to the shore.  If you continue across the island you will come to the ocean facing beach- an endless expanse, sufficient enough even for me!  There’s a beach bar here, or if you return to the harbour you have a choice of restaurants from which to look out across the water.

Barreta  Another island.  Are you sensing a theme going on here?  Also known as Ilha Deserta, this is Portugal’s most southerly point, and a longer ride out of Faro harbour.  Gazing down the beach there’s a real sense of isolation here, until of course, the ferry comes in.  It’s not the place to find yourself in the height of summer as there’s absolutely no shade other than the restaurant O Estamine.  Nevertheless it’s an enjoyable trip out with some compelling views. www.ilha-deserta.com

Once you head east from Faro airport, you reach the Algarve with which most people are familiar- red cliffs and golden sand speckled with rose.  It’s just one long glorious beach, backed by a variety of resorts.  Stacks puncture the sand and walking the cliff tops is a joy.  Commerciality has spoilt some of it, but in low season the beaches from Vilamoura to Lagos are more relaxed and it’s possible still to enjoy the wonderful beaches that brought development to the area. 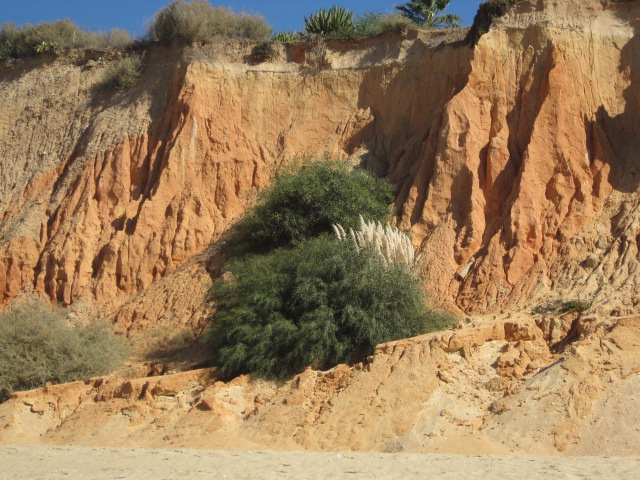 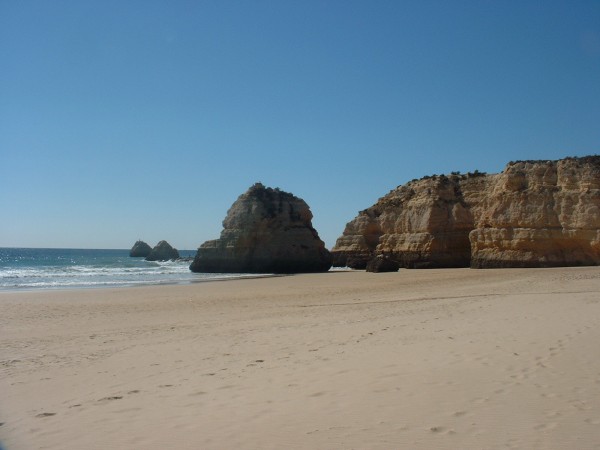 Portimao marina with Ferragudo in the distance 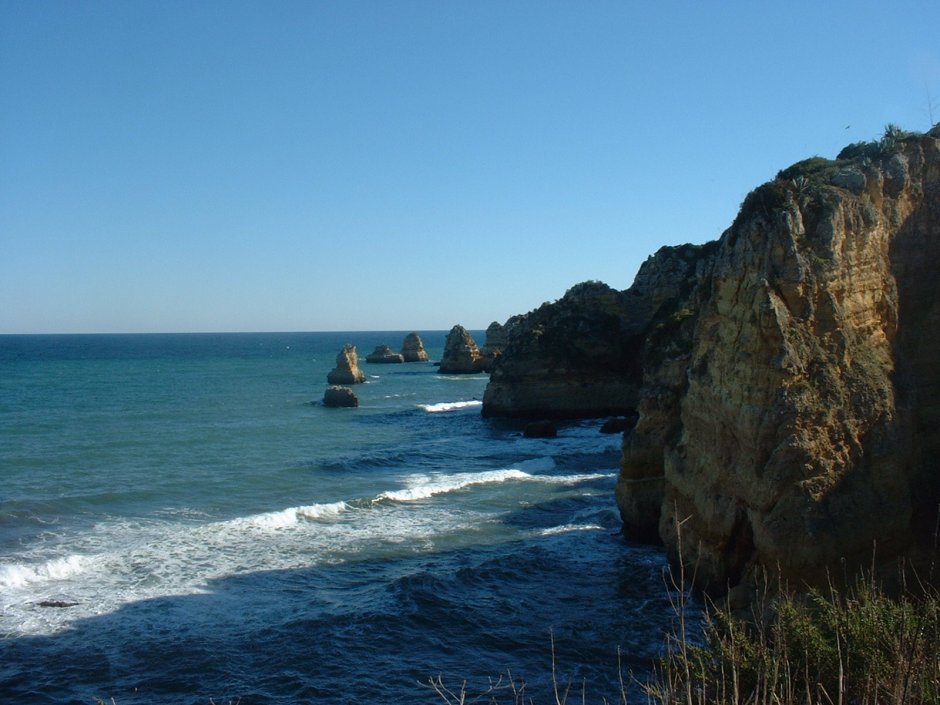 Praia de Marinha has some great memories for me.  We walked the cliff top to Benagil one Spring day and were caught in a sudden downpour- from blue skies to hail stones, I kid you not!- and back to blue skies.  The scenery was glorious and the fields full of flowers but I’ll never forget the disconsolate expression on my husband’s face as we trooped down the hill to the tiny cove at Benagil, rolled up umbrella in hand.  He soon rallied after a warming café duplo in the beachside bar. 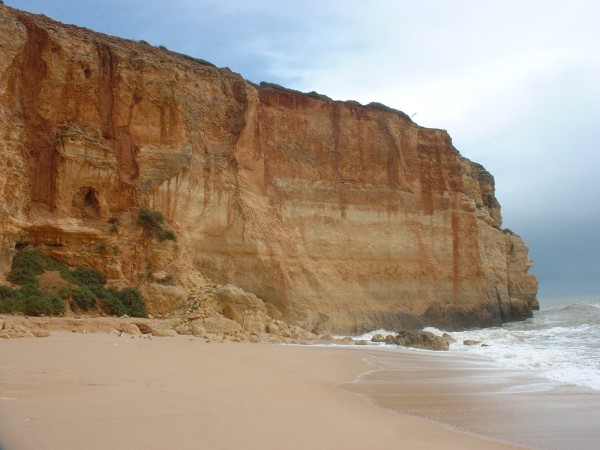 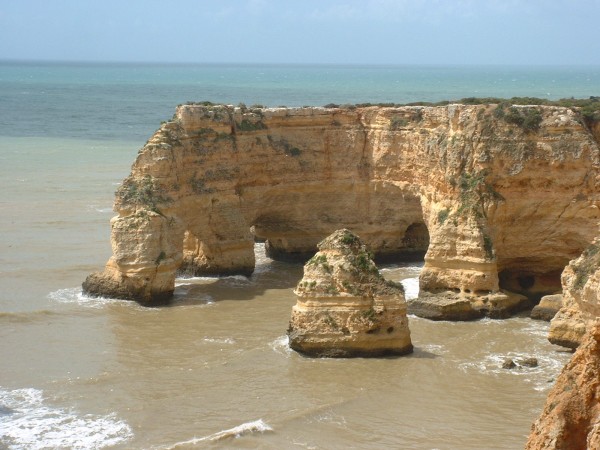 Burgau  I’m rolling along to the west now, to a charismatic beach.  The sandy cliffs are threaded with agave and aloe vera plants and after a swim (paddle in my case) there’s one of those beach bars where you could probably lose a day or two of your life. 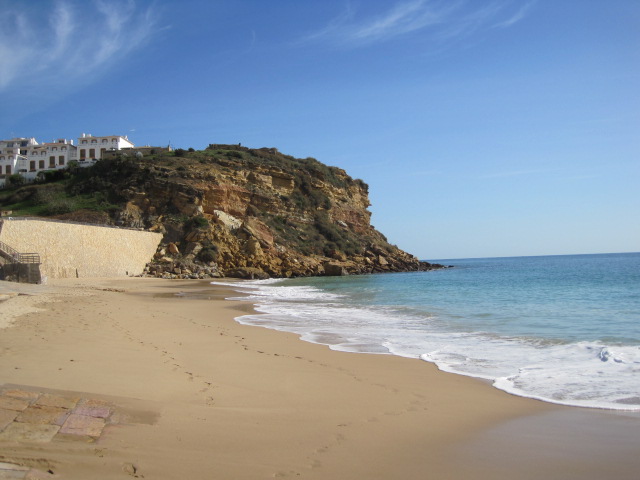 The beach bar in the distance

Amado We’ve turned the corner now and are heading up the Atlantic coast, where the beaches are wilder and largely untamed.  Small communities sit back off the beach and the campervan rules. 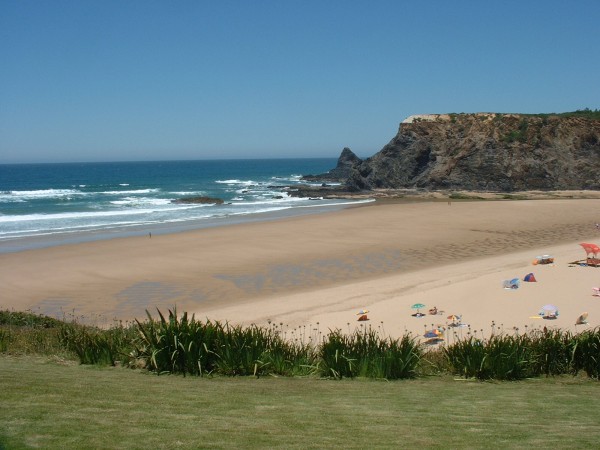 Praia de Odeceixe  Oh, I loved this place!  Billed as “surf city”, it was still quiet when we were there last May and the expanse of beach was the equal of anywhere I’ve been.  You need good legs to get down and back up again, but there’s a rewarding little restaurant, Café Dorita, with good shelter from the winds but maintaining the views.  I expand on my visit in  http://www.simonseeks.com/travel-guides/praia-de-odeceixe-cautionary-tale__168002.

I’m still only at the Alentejo border and the beaches roll ahead of me.  There are many more I’ve yet to visit, and I’m sure, many more that you can point me to.  Please do join in, with your favourite Portuguese beaches and the stories that go with them.  Be assured of my close attention.  When it comes to beaches, I’m all ears.

For more great reads in the Personal A-Z series, try

and don’t forget to sign in on http://myatozchallenge.com/if you want to join in.